IO Interactive has released the Hitman 2 January roadmap which will feature the return of The Undying Elusive Contract.

The January Roadmap for Hitman 2 will also feature 11 contracts pulled from the Submission Thread on Hitman Forum. Each will be added to the game for everyone to play on January 9.

Sean Bean is back in The Undying, and a full reactivation of all Hitman 2 Elusive Targets is on the way.

Bean, who plays Mark Faba, will be in Miami for 10 days. This is great if you happened to miss out the first time around. If you’ve already completed or failed this Elusive Target, your record will stand and the contract will remain closed. 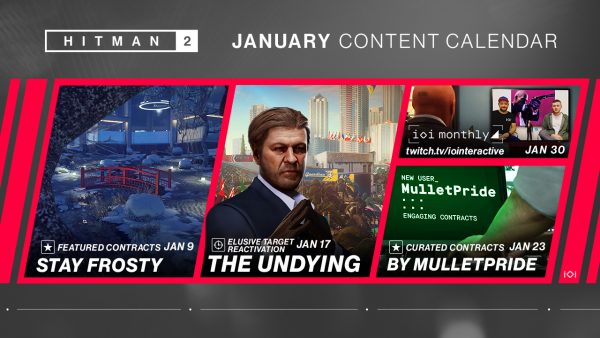 In addition to Featured Contracts, a community curator will pick some of their favorite contracts to be included in the game. The first Curator will be MulletPride, a regular in the Hitman Community.

Hit up the IO Interactive blog for more information.