The ninth season of Destiny 2 is just about to begin and the latest video from Bungie revealed more details about what we can expect to see in Season of Dawn.

After a lengthy battle with the Vex and the Undying Mind, it’s time to head into the Season of Dawn. This season begins on December 10 and brings a new campaign mission where you’re tasked with finding the greatest Titan who ever lived: Saint-14.

After a tangle with your Darkness doppelganger and a trip through Ikora’s portal, The Vex have been kept at bay but now the Red Legion has found a way to manipulate time, so it’s off to Mercury to do battle with old foes across various timelines.

The Saint-14 concept art that kept the Bungie team inspired throughout development of Season of Dawn. Created by @Eric_S_Pfeiffer. pic.twitter.com/yLhWurB4Dm

Osiris and Saint-14 go way back and you discovered his frozen body in back in Year 1, but now there seems to be a way to traverse time and save him. You’ll also be defending The Sundial from the Cabal in brand new six-player activity, and you will earn new weapons by completing Timelost weapon frames, similar to what you did for Ava in Black Armory. These activities are only available for season pass holders, however.

Season pass holders will also instantly unlock the Exotic Scout Rifle, Symmetry. All players will be able to upgrade The Lantern of Osiris artifact to increase Power and unlock seasonal armour and weapon mods. Changes have been made so that you can configure your loadouts more accurately to suit your playstyle. Champion mods are now to the left, with reloader mods in the middle including unflinching mods and new Guardian Angel mods which have a chance of generating healing orbs with precision kills using Season of Dawn weapons.

Mods will be represented by a new symbol making them easier to identify, and you’ll find new mods that allow you to get and consume Charges of Light which will apply to all aspects of Destiny 2. There’s also a new multi-equip feature for Finishers so you can see a playlist of your favourites that will allow you to randomly select from a few during gameplay. You’ll get The Killbreaker finisher as part of the Season Pass 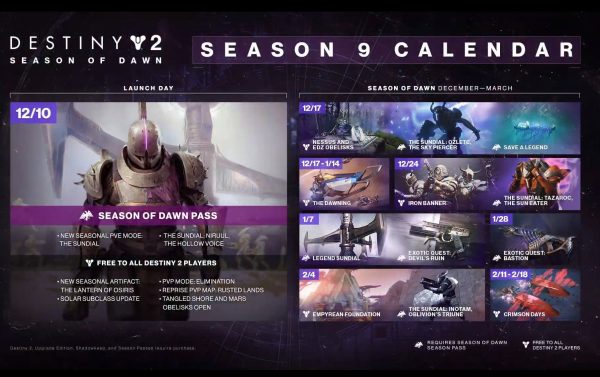 We also got a brief look at The Sundial PvE activity where you’ll be facing enemies old and new as you battle through time. You can pass through portals that will take you to different timelines where you can see realities that could come to pass depending on what the community achieves. There are also new bosses coming at various points throughout the season that you’ll be able to face. More difficult modes will also become available for all you veterans out there, though you will need a pre-made Fireteam.

There will be new Ritual Weapons to earn, too, as well as a few new Exotics to hunt for, which include a new Devil’s, Bastion and Saint-14’s Paradox Perfect shotgun. Lord Saladin and the Iron Banner will also be returning, with new armour and weapons to earn, and the Rusted Lands map makes a comeback.

For the most part, you’ll be returning to Mercury for a large chunk of Season 9, but there are new locations to visit and you can use your Sparrows to get around. While the pidgeon-loving Saint-14 is back there’s no word on whether Cayde-6 will return to Destiny 2, but a gal can hope.

Destiny 2: New Light players will also get a bunch of new content, including:

Alongside the new season, the annual winter event, The Dawning, also begins on December 17 and runs until January 14, 2020, where Eva Levante will have more holiday-themed bounties and rewards for you. Crimson Days will also return on February 11 -18. 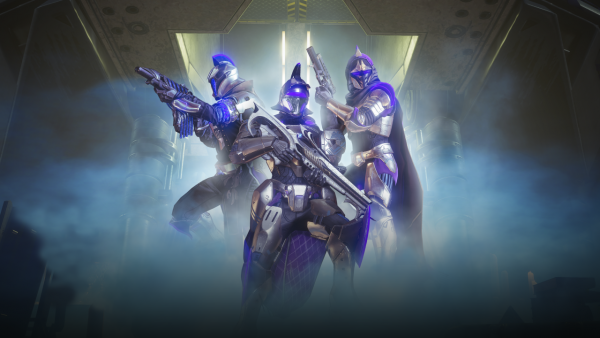