While the US may have the great Only on PlayStation PS4 Bundle for $199.99, Amazon UK has that deal beat with a PlayStation 4 Black Friday bundle that includes five great games for cheap.

Right now at Amazon UK, you can grab the PlayStation Hits Bundle with Red Dead Redemption 2 and Grand Theft Auto V Premium Edition for £229.99. The PlayStation Hits bundle already comes with three great games–Horizon: Zero Dawn (with DLC), The Last of Us Remastered, and Uncharted 4: A Thief’s End–so the two Rockstar titles are just icing on the cake. There’s no doubt that this collection would keep you busy for a long time.

Five games might be a bit much, though, and Amazon UK also has some other PS4 Black Friday bundles to take advantage of. The Fortnite Neo Versa 500GB PS4 Bundle with Second DualShock 4 Controller for £199.99 gives you a second controller for multiplayer games. If instead you want the latest Call of Duty title, you can nab the Call Of Duty: Modern Warfare PS4 500GB Bundle for £199.99. 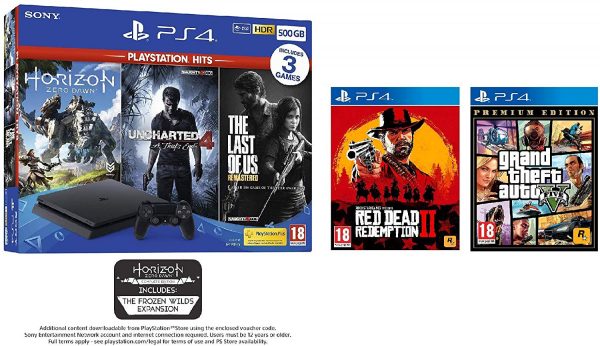 What’s that, you want even more games? Well, Very has this very good PS4 5 Game Bundle for £50.00. This bundle includes the Unchartered Collection, God of War III Remastered, Horizon: Zero Dawn Complete Collection, The Last of Us Remastered, and God of War (the latest one). If you’re getting the PlayStation Hits PS4 then there is a two-game overlap, but you can give Horizon and The Last of Us away as a gift while rounding out your Uncharted collection and grabbing two God of War titles!

If you already have a PS4 and want to see other game deals, head on over to our PS4 Black Friday deals hub for all the best sales. If maybe a whole PS4 and PSVR combo is enough money spent on Sony for the year, check out our Nintendo Switch Black Friday and Xbox One Black Friday deal hubs for other console offers.