Guardians! The Iron Banner is back for another week, so grab your best gear and assemble a fireteam; the hunt is on.

The first Iron Banner in Season of the Undying has started and Lord Saladin has a brand new Pinnacle quest for you: Scour the Rust. There are six steps to this quest that involves killing Guardians, using Supers and different weapons during Iron Banner matches.

From November 7 onwards, Pinnacle reward Power levels will be increased from +1 to +2, which should make reaching and pushing past 950 Power easier for a lot of players.

It would be a good idea to wait until you’ve received the update before turning in any Pinnacle gear bounties or completing Pinnacle activities to make the most of this boost.

You’ll have until the Season of the Undying ends to complete this quest, but Iron Banner only lasts a week and is on a three-week rotation. This session lasts until October 22, so you’ve got some time yet.

Once this quest has been completed, you’ll receive a full set of Iron Will armour, including a class item. Remember, you won’t be able to turn in any Iron Banner tokens until you complete this quest. 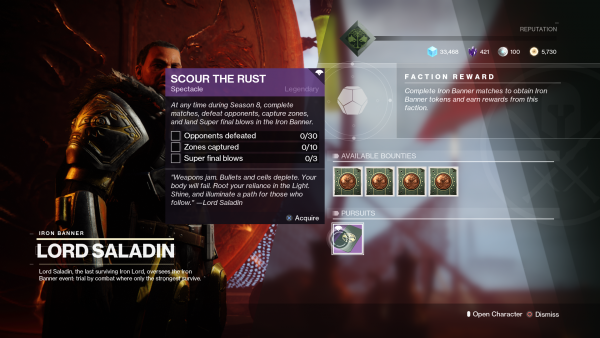 If you’re inexperienced at PvP, these steps may take a little longer. Compared to previous Iron Banner quests, this version is pretty tame. Each step will update automatically, so there’s no need to keep visiting Saladin.

To get started, speak with Saladin in the Tower to pick up the quest.

The first stage of this quest is called Spectacle. You’ll need to:

A good tip is to keep your Super until a group captures a Zone, then try your best to sneak up and unleash it on them. I managed to wipe out three Guardians at once this way and earned a few Triumphs as well.

Your reward for this step is the Claws of the Wolf Pulse Rifle.

Step three is called Timing. It’s more challenging than the first two and will take a while to complete. To progress, you must: 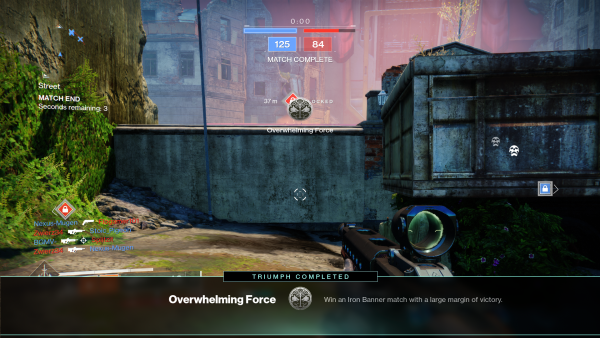 Execution is the next quest step, which feels somewhat easier than the previous. To complete it, you have to:

There’s a bug in the last step of Scour the Rust. Instead of getting Super or Grenade Launcher kills, you need get kills using SMGs. Bungie is aware of the issue, but it’s not been fixed as yet.

To complete Conviction, you must:

Finally, to complete Forgeborne, pay Saladin a final visit and get your last piece of Iron Will armour. 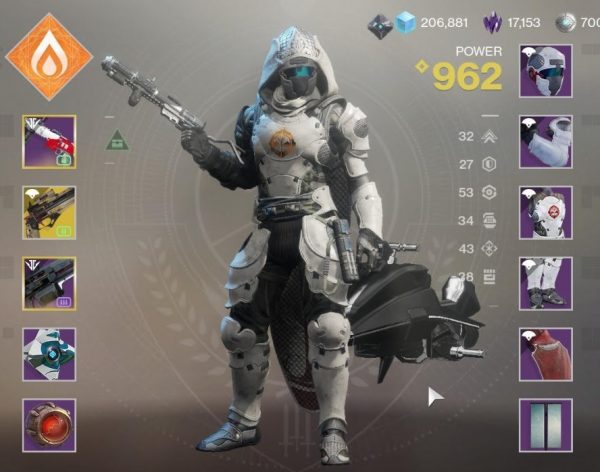 For more Shadowkeep guides, check out our pages on how to access the Vex Offensive Final Assault, how to find the Pit of Heresy Dungeon, Nightmare Essence Cleansing and how to get Phantasmal Fragments, Cores, and access Nightmare Hunts.

You can also check out where to find the hidden Jade Rabbits and all the dead Ghosts and how to complete the Lunar Spelunker Bounty. We’ve also got guides on how to get the Leviathan’s Breath Bow, the Xenophage Exotic Machine Gun, the Divinity Exotic Trace Rifle and Deathbringer Rocker Launcher.