Old games, new games, big games, small games. Good games, bad games, games you don’t even remember coming out the first time around. In 2019, the players who demanded that developers put everything on Switch got their wish. One of the most technically demanding, massive open world RPGs of the current generation? Sure thing. A bunch of old computer RPGs that had never before appeared on consoles? Absolutely. A gorgeous team-based shooter requiring precision aiming and twitch skills? Here, take it.

But, in some cases, this presented a real Monkey’s Paw situation. W.W. Jacobs’ famous short story begins with this epigraph: “Be careful what you wish for, you may receive it.” And while none of these Switch ports were quite as bad as having your son return from the dead as a decaying zombie, some weren’t exactly ideal.

Below, we’ve rounded up the best and worst Switch ports of 2019.

Consider The Witcher 3: Wild Hunt a successful exhibit A for the “put everything on Switch” crowd. Somehow, Saber Interactive managed to fit CD Projekt Red’s gargantuan open-world game (!), plus its two sizable expansions (!!), onto a 32 GB cartridge (!!!) with no additional downloads required (!!!!).

That may seem like witchcraft, but it was mostly accomplished by reducing the resolution of character models, environmental details and the quality of cut scenes. Still, the port maintains a steady 30 FPS framerate most of the time – though it chugs in really busy city areas – and generally manages to look pretty okay, even maintaining water ripple physics and a high number of NPCs in crowds. For adults with busy schedules, being able to play one of the best RPGs ever made on the go, with roughly the graphical fidelity you could achieve on low settings on a PC, is a huge boon.

Overwatch suffers from many of the same issues plaguing the Switch version of The Witcher 3. But there are some significant differences between a long RPG that a player may never be able to finish without the help of a portable version and a competitive team-based shooter that requires precision-aiming.

Digital Foundry’s breakdown found that the port’s framerate can bottom out at 23 FPS when the screen is busy with multiple players firing off their ultimate abilities, and it’s telling that only a handful of media bothered to review a game that on other platforms has a dedicated and precious fanbase.

“On most platforms, Overwatch is an incredibly polished, complex, and engrossing team-based shooter,” said Gayming Mag. “Overwatch on the Nintendo Switch is not even worth the price of admission.”

The imprecise aiming that the Switch’s Joy-Con thumbsticks allow for and the lowered 30 FPS (at best) framerate nerfs heroes that rely on accurate aiming from a distance like Ana, Widowmaker, Soldier: 76 and Genji. The fact that a newly released Blizzard game currently sells for less than £23 says a lot.

All told, this is the worst version of Overwatch, and should be avoided if you have literally any other way to play.

Divinity: Original Sin 2 is one of the most beloved RPGs of the current generation, and its Switch port is similarly best-in-class. While this version’s graphics have taken a hit, Divinity: Original Sin 2 smartly allows players to seamlessly switch, not just between docked and handheld, but between the Switch port and the original version on Steam. That’s a really smart feature that will likely help many players make it through an incredibly long, dense RPG (provided, of course, they shell out for both versions).

And other classic isometric RPGs also got stellar ports on Switch this year. Computer RPGs like Baldur’s Gate 1 and 2, Icewind Dale and Planescape: Torment have come to consoles already (and Neverwinter Nights is on the way) courtesy of developer Beamdog and publisher Skybound. Those ports have all been well received with fans so far.

THQ Nordic, whose very existence is a bit of a Monkey’s Paw, brought a pair of last-gen open-world games to Nintendo’s system this year. And while it was nice to have Red Faction Guerrilla: Re-Mars-tered and Saints Row: The Third on a portable console, both releases came with drawbacks that didn’t seem appropriate for current-gen ports of games that are ten and eight years old, respectively.

Red Faction Guerrilla, in particular, is dogged by some horrendous load times. While the barren Martian setting looks clean and crisp both while playing in docked and in handheld, the long waits drag the game down. In both docked and handheld, the initial load and respawn loads stretch out to roughly 40 seconds. That sluggishness is compounded by the fact that something as simple as opening and closing the map takes upwards of two seconds. It’s not horribly long, to be sure. But, it’s long enough that the game displays text which reads, “Loading…” each time you go to select an objective on the map. I played it at launch and was frustrated by these technical issues. I redownloaded it this week to check and see if anything had changed. Nope.

Saints Row: The Third, on the other hand, has a different technical problem. While it looks pretty good in handheld, textures become extremely murky when you play it on a big screen. This problem is exacerbated by the fact that the game is very dark (even with brightness cranked up all the way to 100 percent). So, like Overwatch, Saints Row presents a situation where the best way to play the game for optimal visual performance – handheld – is at odds with the ideal way to play the game for the most precise controls, with a Pro Controller.

THQ Nordic didn’t do the best job with either of the ports above, but they absolutely knocked it out of the park with the Switch version of GameCube-era gem, Sphinx and the Cursed Mummy. It’s not really all that impressive considering the fact that it’s a linear game from 2003, but I still had a great time playing it on my Switch during the polar vortex that ravaged Illinois in February. With up-rezzed textures and a complete absence of any technical issues, this is the best way to play an unfairly overlooked game in 2019 – and it gives me hope for the company’s upcoming remasters of Destroy All Humans! and Spongebob Squarepants: Battle for Bikini Bottom that will hit the Switch in 2020.

Loser: Bloodstained: Ritual of the Night 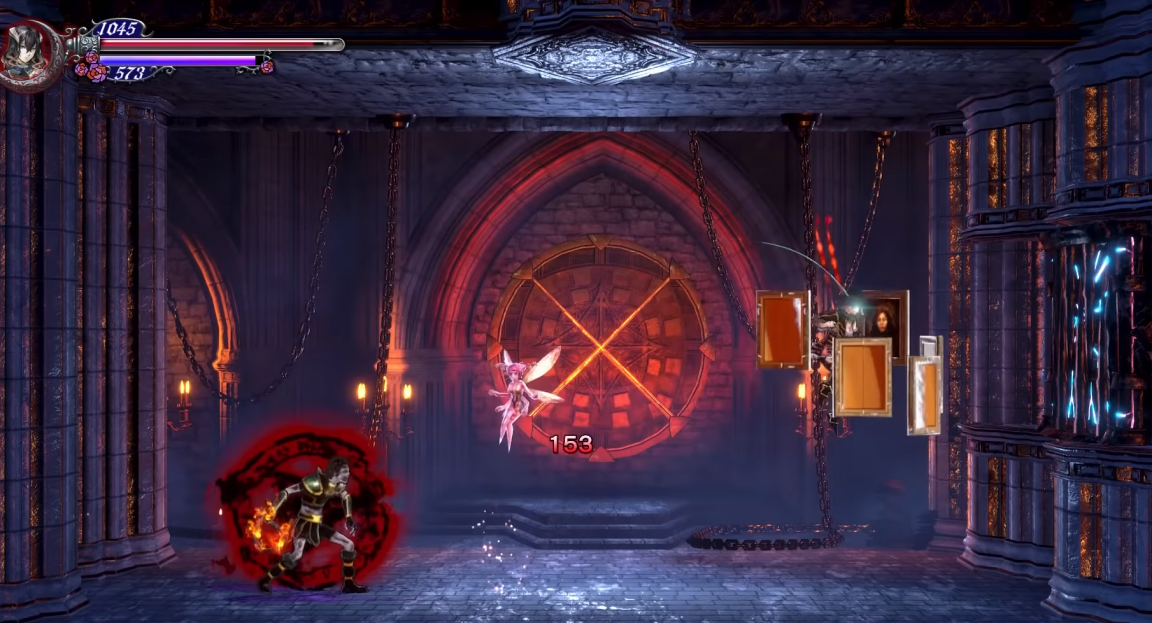 Bloodstained: Ritual of the Night finally got a patch that seems to have improved a lot of its performance issues on Halloween. But, that patch came after months of Switch users dealing with a vastly inferior version of the game.

The Switch version was riddled with bugs at launch, with innocuous activities like reading books reportedly crashing the game for some players. The graphics in this version have also been pared down from the PC, PS4 and Xbox One versions of the game, and even with those compromises, the game struggled to hit its capped 30 FPS framerate.

The Bloodstained team worked to improve those issues, and claimed to have reduced load times by up to 70 percent in the October patch. But even with those improvements, the graphics still look much worse than their counterparts on other consoles and PC. That’s a shame because Bloodstained is an ideal contender for Switch: it’s long (my PC playthrough took me roughly 30 hours) and its visuals are nice, but not spectacular enough to demand being played on a TV (or, seemingly, to warrant the visual downgrade the game received on Switch).

I reviewed 5 and 6, splitting my time evenly between docked and handheld, and never encountered any technical issues. I never noticed framerate problems (though other reviewers did) and both games looked great in handheld and on my 56” TV. The games might suffer from direct comparison to other current gen versions, but this was my first time playing either game, and the ports impressed me from a graphical and technical standpoint.

In its technical breakdown, Digital Foundry called the Switch port of Resident Evil 4, “good, but not perfect,” noting that graphics marked a slight downgrade from the PS4 version. The game targets 60 FPS, and slowdown in docked mode could be significant at times, dipping into the 40s. But, in handheld, the game typically ran well, and stayed close to the targeted 60 FPS.

Resident Evil Remake, Digital Foundry said, was even more successful in its port to Switch. While John Linneman and Alex Aniel dinged the game for slightly long loads between certain rooms and occasional stuttering, they praised it for solid graphics and 1080p output. On the other hand, while Resident Evil 0 looked good, the folks at Digital Foundry noted that the long loads that occasionally bogged down Remake were especially pernicious in 0. Aniel estimated that roughly 75 percent of rooms had long loads, with the transition marked by a glitchy animation.

All told though, it’s great to have a huge portion of the Resident Evil series available on Switch with a collection of ports that, for the most part, do a stellar job of making the games playable on the big screen or in handheld.

As someone with a PS4 and PC, I would never choose to play Mortal Kombat 11 on Switch. The Switch’s fiddly Joy-Cons are a bad fit for the precision required to execute combos consistently and the game’s scaled down graphics turned me off. But, Shiver Entertainment did nail the most important bit: the game runs at a consistent 60 FPS, which is an absolute must for fighting fans. So, like Overwatch, the best way to play this game for precision – with a Pro Controller – is the worst way to play it for presentation, with the ugly graphics scaled up to a big screen TV.

Cuphead, The Return of the Obra Dinn, Downwell, Slay the Spire and plenty of other visually arresting indies arrived on Switch this year with little (if any) graphical downgrade from their PC and/or console and/or mobile iterations. With games like The Witcher 3 arriving on the Switch in a playable state, it’s understandable for players to long for their favorite AAA games to arrive on the system. But, the Switch’s third-party lifeblood has always been indie games. And that will increasingly be the case as the PS5 and the next Xbox launch in 2020 leaving the Switch behind. It’s nice to see big games on the tiny console. But the Switch is still the perfect place for indies.

It is important to note: Even the most compromised ports are impressive feats of ingenuity. Porting games to underpowered hardware is, almost universally, a thankless job. Except in the rare cases where a port is miraculously better than anyone would have expected – The Witcher 3, for example – the teams behind these versions will never be recognised, except to be singled out for criticism. A third-party, graphically impressive game running on Switch at all is something to celebrate. It just may not be worth your cash.