Although saying it out loud might sound a little wild, you can visit a giant Mewtwo in Tokyo right now.

A brand new Pokemon Centre/Nintendo Store opened in Parco, Shibuya yesterday. One of the visitors took to Reddit to report on what they saw: a gigantic Mewtwo, curled up in a massive incubation chamber. You can check out a short clip of the chamber on Imgur. Mewtwo looks lovely and calm. It’s almost as if it isn’t going to shatter the glass with an almighty explosion once somebody wakes it up. 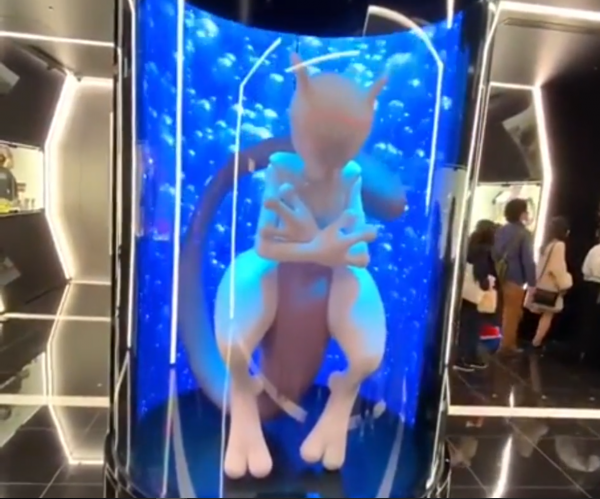 It’s difficult to guess what Nintendo is up to here — maybe it’s just an ordinary ornament and will stay exactly the way it is. Maybe it’s a temporary installation designed to celebrate the inauguration of the new store. Or maybe there’s a narrative thread woven into this giant Mewtwo’s existence. Regardless of what happens next, it’s curious to see.

The tank itself isn’t actually filled with water — as far as fans who attended the opening could tell, it’s actually covered in screens. It makes sense: the upkeep for a massive Pokemon figure in a tank with actual water would probably be quite steep. Screens don’t require much attention, and will make it much easier to eventually depict Mewtwo psychically smashing everything to bits, should that be the next move.

For UK folks looking to get their fix of Pokemon in real-life, a London Pokemon Centre was opened on October 18 at Ariel Way, Shepherd’s Bush. There’s no sign of Mewtwo there, but you can still get your fair share of Pokemon merch and enjoy an authentic experience in a real centre. If you want to see giant Mewtwo in real life, though, you’ll have to make your way to Tokyo.

If you’re still on the fence about Game Freak’s most recent pair of Pokemon titles, Sword and Shield, you can check out our review here.