The best-selling digital launch of 2019 is Call of Duty: Modern Warfare, according to estimates from SuperData.

Considering Call of Duty: Modern Warfare released at the end of the October reporting period, that’s a rather large feat.

According to SuperData figures (thanks, Blue), the game sold an estimated 4.75 million digital units across console and PC. While that figure is down 11% from Black Ops 4 in 2018, the latter released on October 6, compared to Modern Warfare’s October 26 release.

The game came in first place on the digital console charts and sixth on PC.

And the juggernaut that is Call of Duty Mobile generated an estimated $57 million in total revenue during its October launch. During the month, the game saw 116 million monthly active users, with iOS making up 82% of total spend. 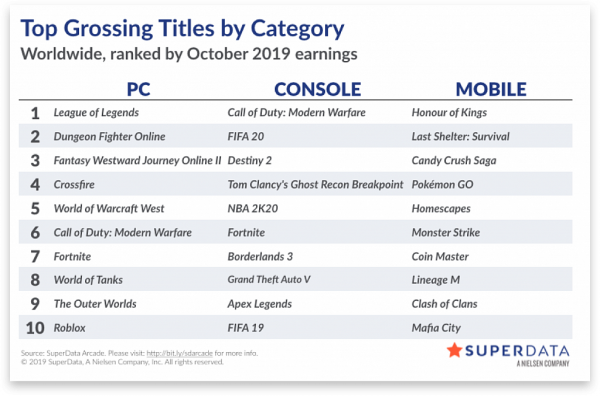 In the report, SuperData also states Apex Legends had its best month since the title’s release. The game generated $45 million from in-game spending in October across all platforms – up from $16 million in September.

Looking over the digital chart for the month, Ghost Recon Breakpoint – which released on October 6 – came in fourth place on the console chart. October 25 release The Outer Worlds saw a nice debut landing at number nine on the digital PC chart.

Mainstays Fortnite and GTA 5 were both in the top 10 in digital sales on consoles for the month alongside second-placed Destiny 2.

Destiny 2’s placement on the chart is likely attributed to the release of Shadowkeep and New Light which released on October 1.