If you don’t have scanners of your own, it’s very easy to miss a lot of BD-1’s upgrades in Star Wars Jedi: Fallen Order, including the vital Scomp Link. Here is where to find each and every expansion to BD’s systems.

He might not be fluent in six million languages, but BD-1 is about as useful a robot side-kick as a Jedi could ask for. Throughout Star Wars Jedi: Fallen Order, Cal and BD will face numerous obstacles that require a droid’s touch – like Scomp Link chests and doors, unpowered machinery, impenetrable force fields.

There are two vital BD-1 upgrades that unlock naturally through the progression of the Jedi Fallen Order’s story. These are the Holomap, which allows you to get your bearings in classic flickering Star Wars style, and Stim Canisters, which let you restore your precious health.

We don’t need to go into too much detail with these. The Holomap becomes available pretty much as soon as you touch down on Bogano and meet BD, while Cal gets access to Stim Canisters once he reaches the Hermit’s Abode.

Where to find the Scomp Link in Star Wars Jedi: Fallen Order

One BD upgrade that you will start to miss immediately is the Scomp Link. You’ll start to find boxes and doors that need it pretty soon in your adventure, and no one likes missing out on secrets.

To get the Scomp Link for BD-1, you need to travel to the planet Zeffo and complete the Tomb of Eilram to unlock the Force Push ability.

Next, return to the Weathered Monument area of Zeffo and use Force Push on the large crumbly door. It should be marked as green on your holomap. 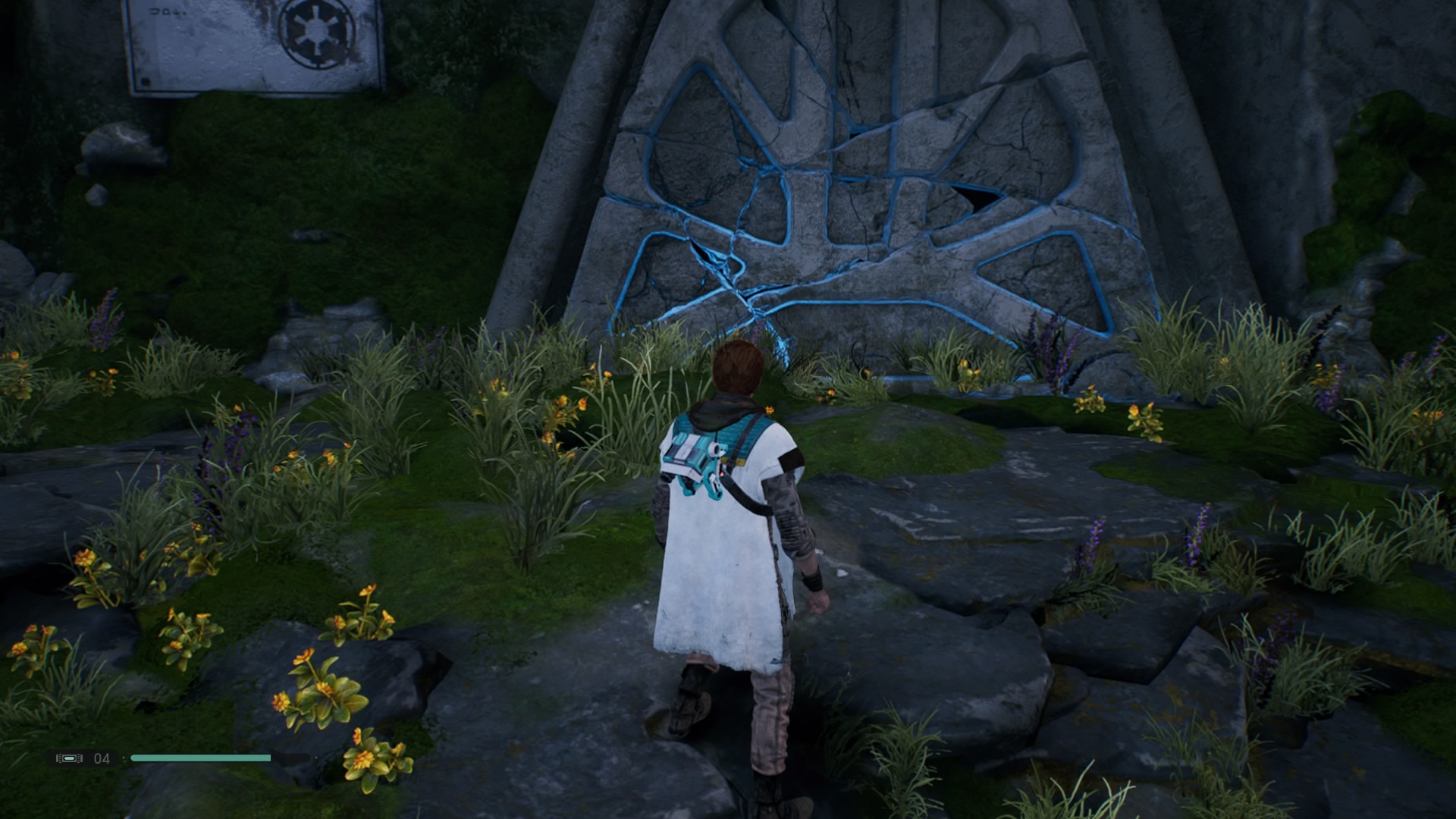 With the way clear, jump inside the hole and go around to the left. Keep going until you reach a climbable grate. 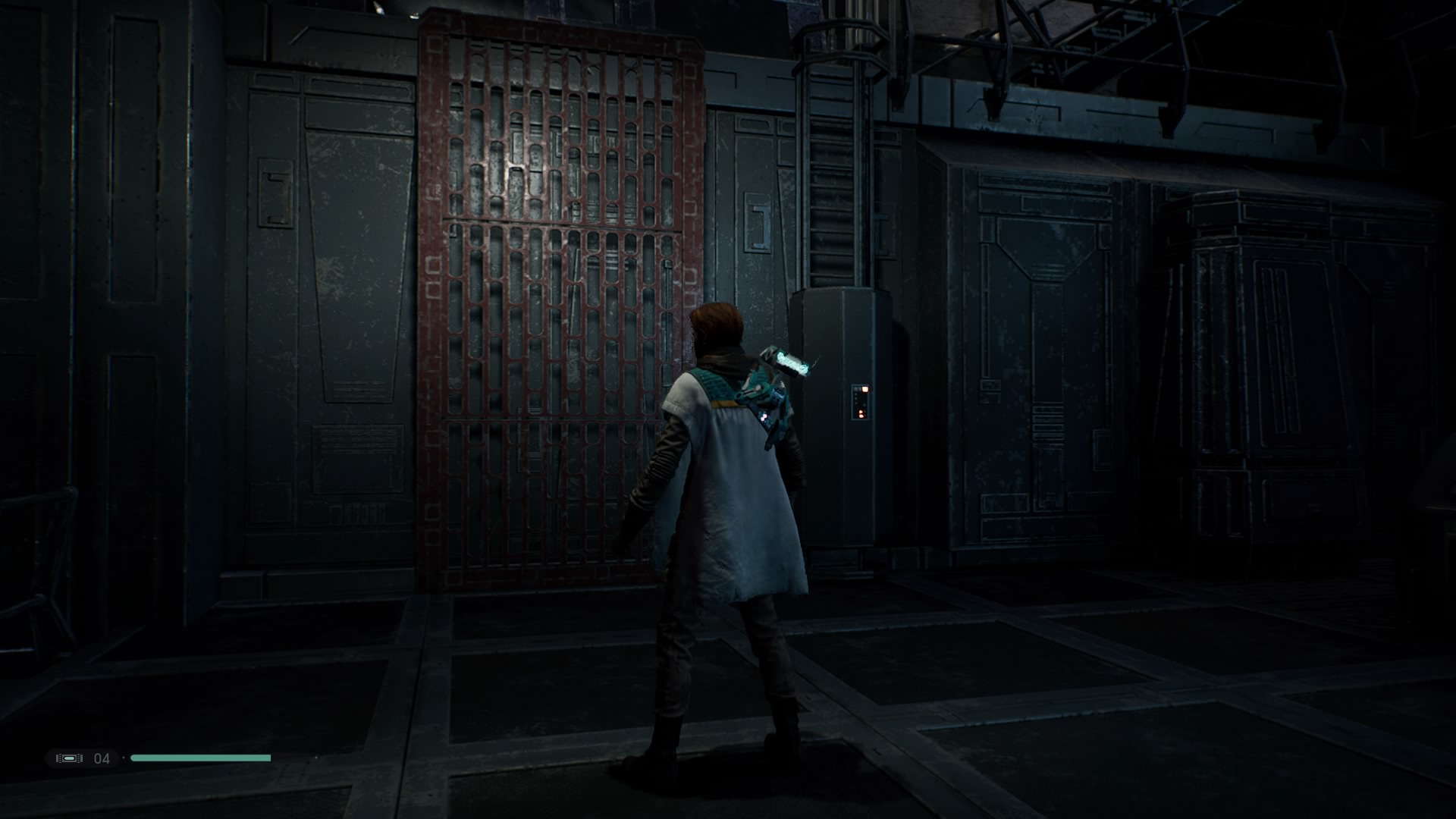 Here you’ll find a workbench with the parts you need for the Scomp Link! 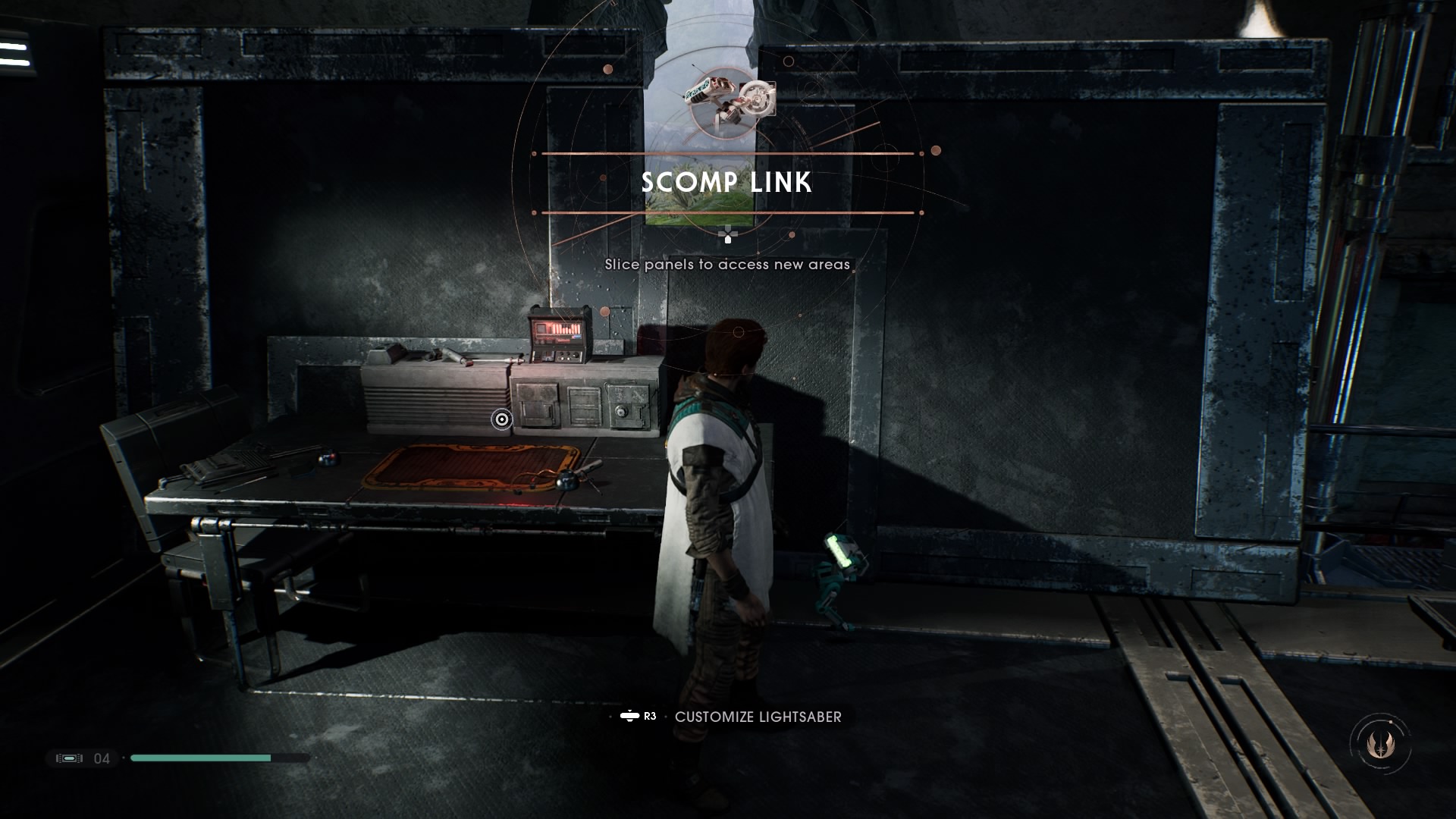 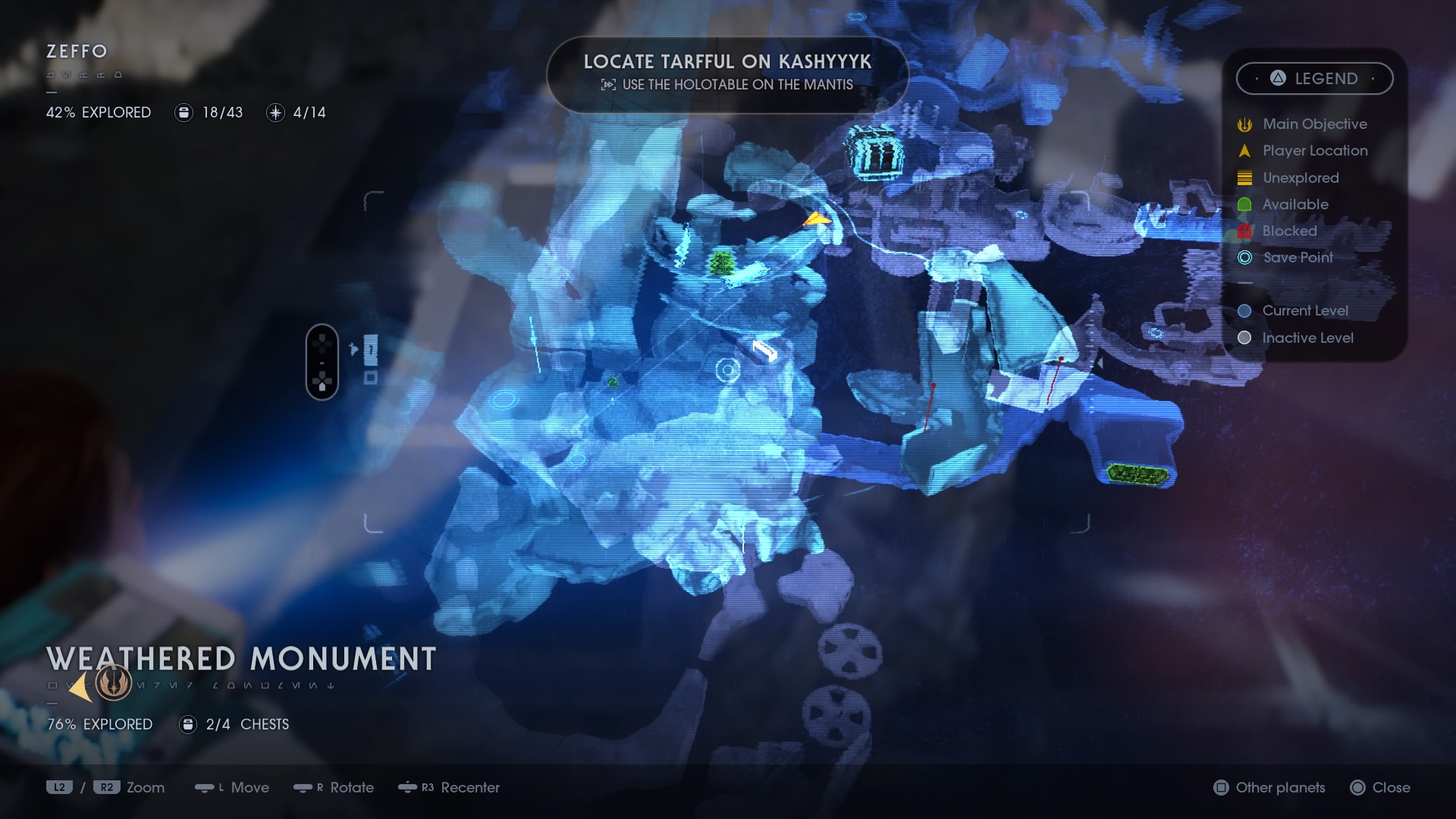 Continue up the spiralling path to the top of the area to get back out.

The Overcharge BD ability lets you power inert machinery that you otherwise couldn’t use. 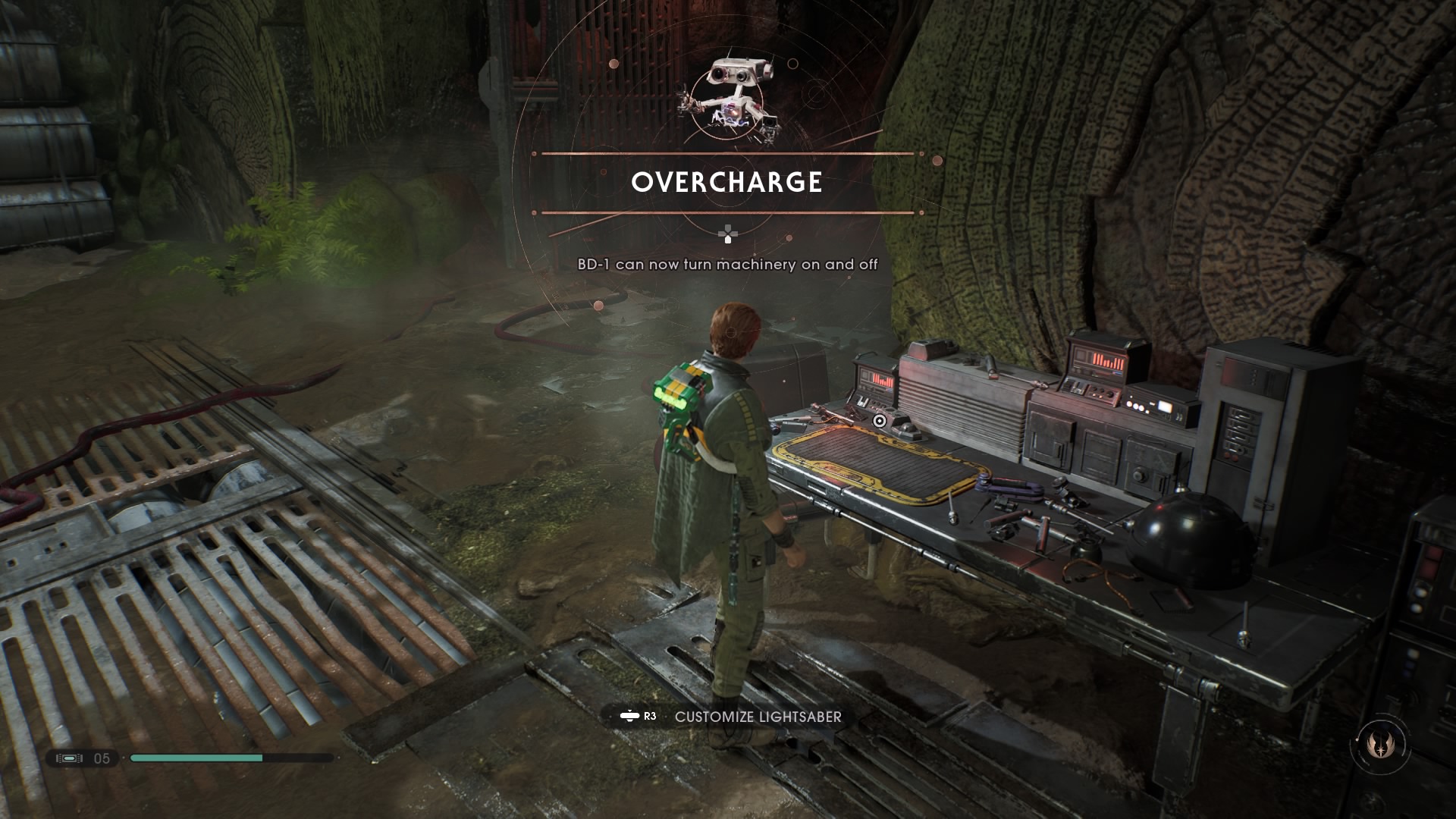 It’s found soon after you land on Kashyyyk, in the Forest Trench area. After you leave the Cargo Pad area, there are two sidepaths which lead to your right. The first is blocked by a red force field. The second leads into a new room. Here you can see a workbench on the lower level, over to the right. This is where you collect Overcharge.

The Powered Zipline ability is an interesting one, since it doesn’t so much open new areas as help with traversal in general.

It’s found in the Imperial Digsite on your way to the second tomb on Zeffo. It’s over on the right-hand side of the area, in a side room with two security droids. 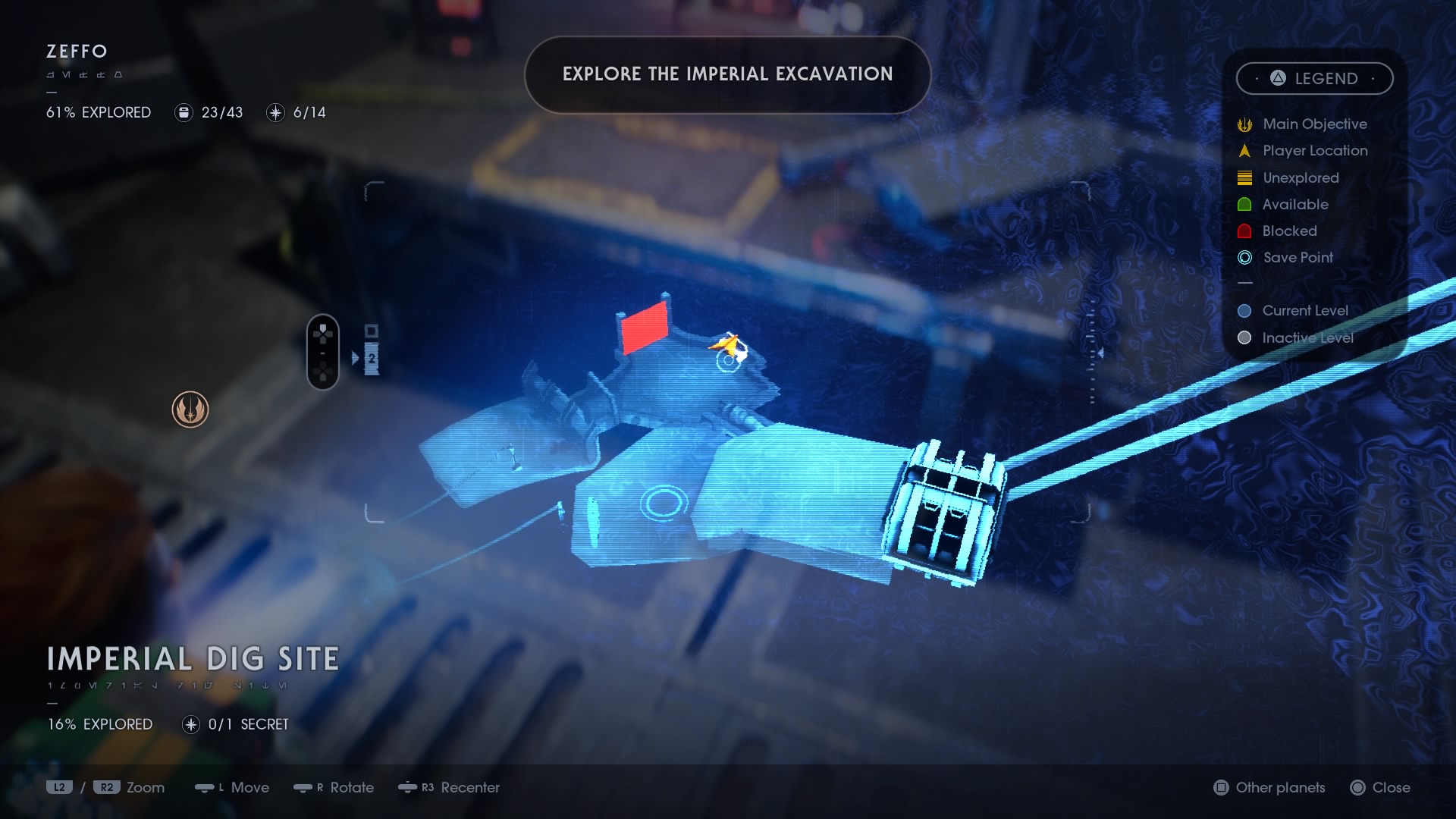 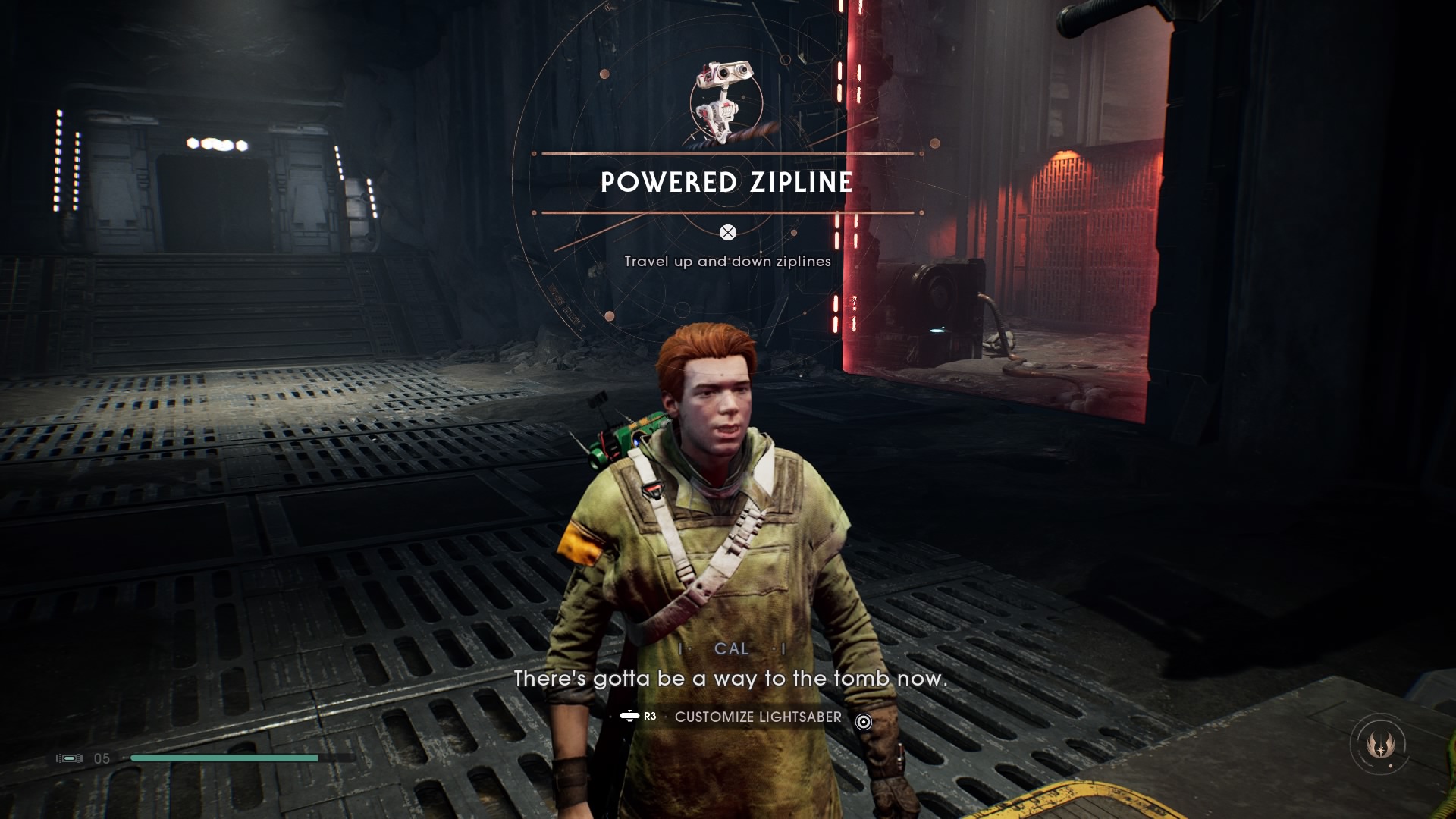 Flying enemies like Probe Droids are annoying to deal with, but not when you’ve got this ability.

Once you’ve unlocked Force Pull, you can grab Probe Droids towards you then slice them to bring them under your control. It certainly beats pinging back bolt after bolt of blaster fire.

To find it, after you’ve completed the Tomb of Mikrul on Zeffo travel along the path back towards the Imperial Headquarters. As you make your way across the wall runs you’ll eventually come across a workbench with the Slice parts ready to grab. 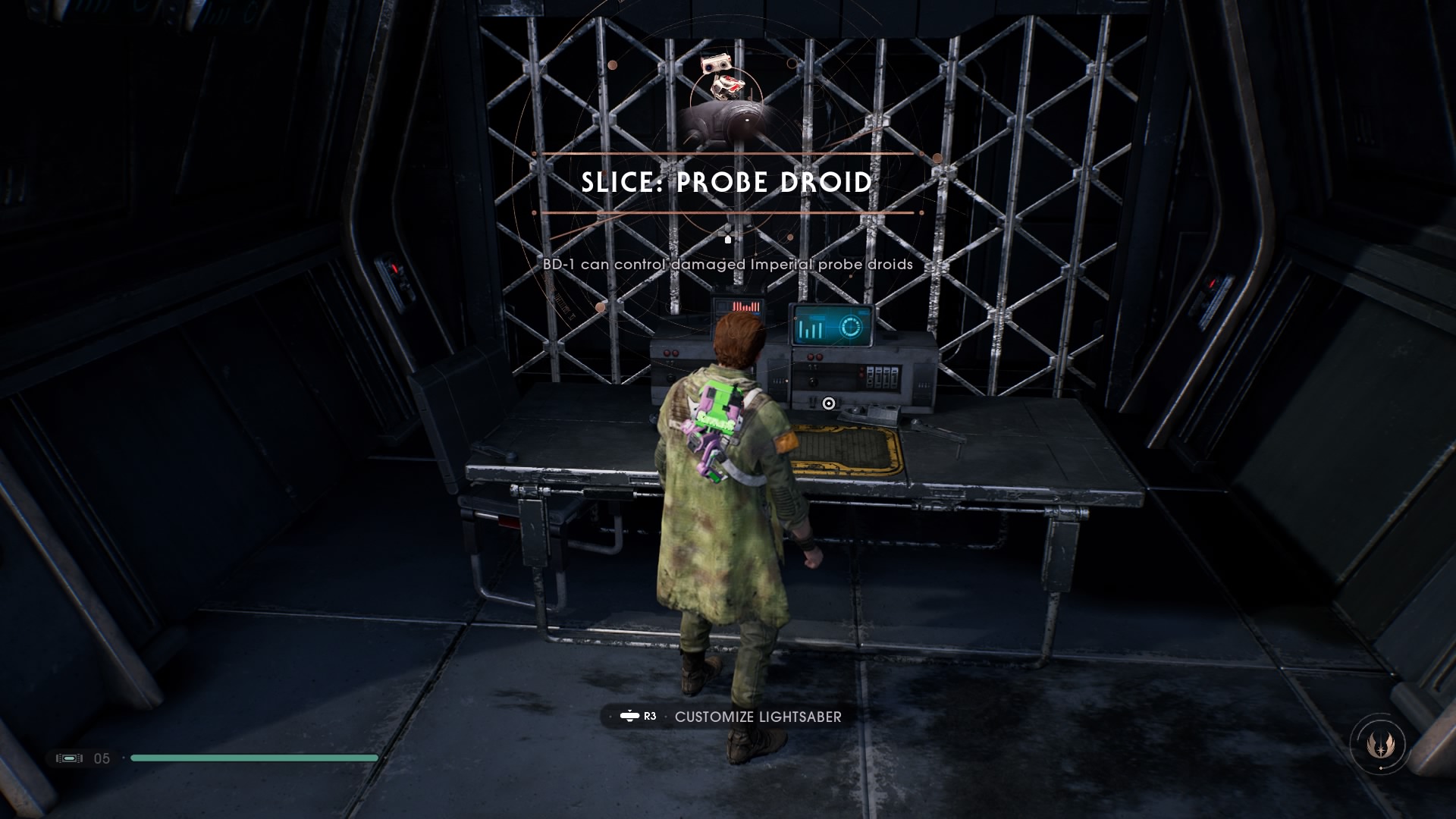 This upgrade is trickily hidden. On the bottom edge of the Imperial Refinery on Kashyyyk, where there’s the spinning turbines in the water, there are some ropes you can Force Pull and swing around the corner on.

This leads to a secret area around the back with a workbench. 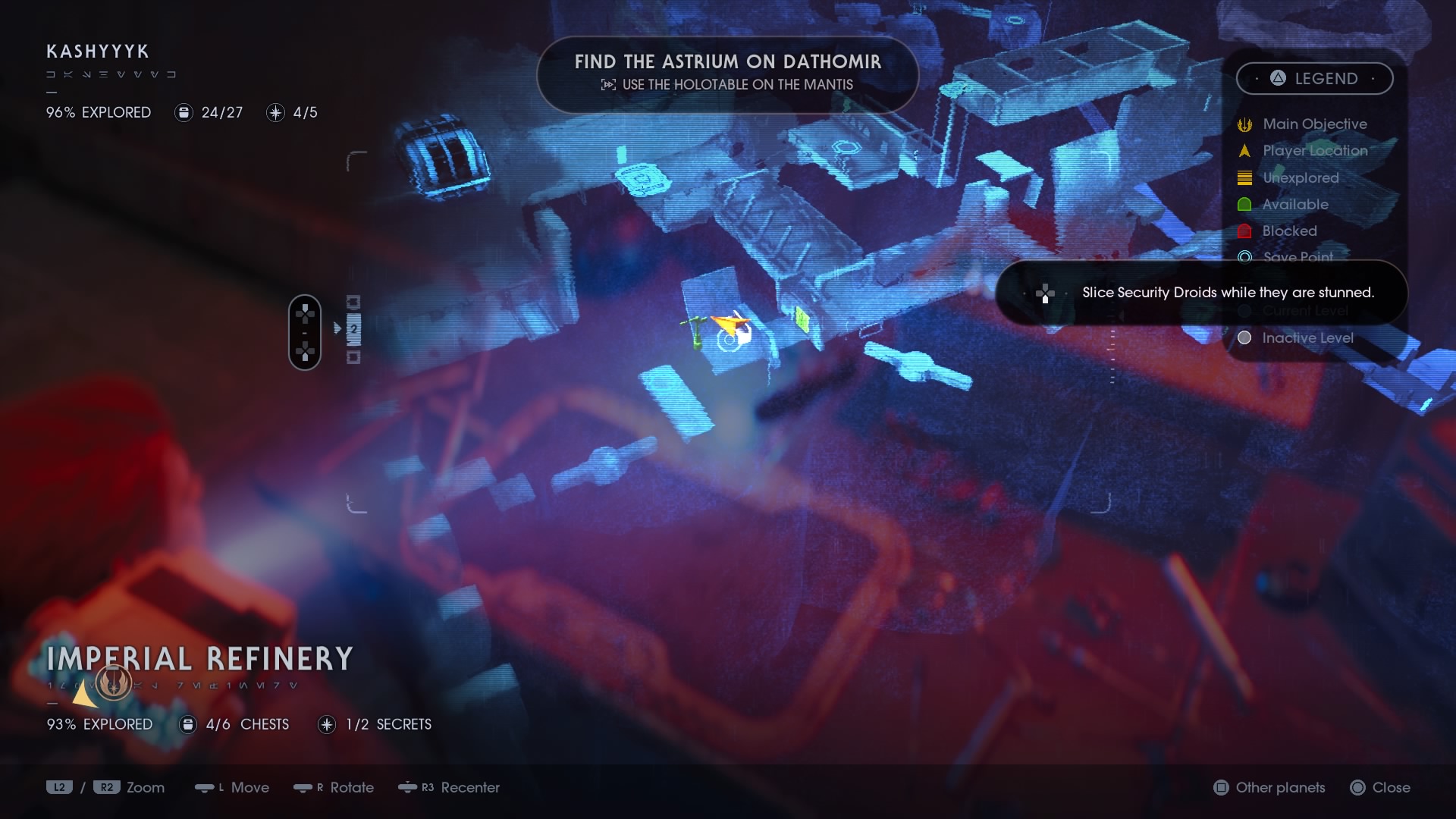 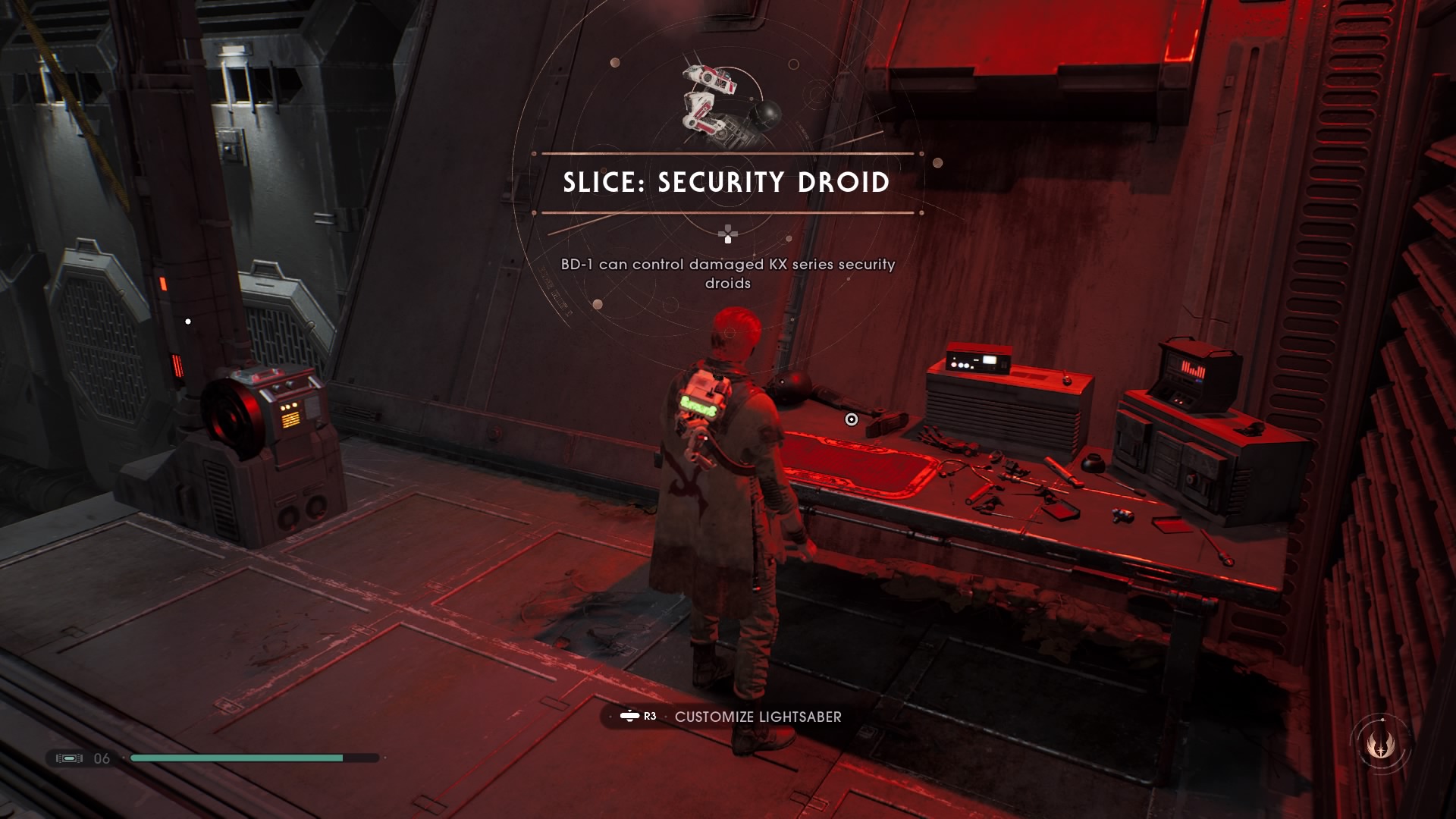 Slice: Security Droid lets you take control of these powerful enemies once they’re damaged, which is a strong ability considering how difficult they can be.

For more on Star Wars Jedi: Fallen Order, here’s where to find custom Lightsaber Parts. And if you’re finding things tough, here are some general tips for becoming a Jedi master.