While we’re all excitedly awaiting what Xbox One Black Friday deals are unveiled over the coming weeks, Walmart has kicked the shopping spree off early with an Xbox Ultimate Sports bundle for just $299.99.

Whether you’re a fan of basketball, football or that other version of football, you’ll be satisfied with the selection of this year’s sports sims that are included in the Xbox Ultimate Sports bundle. To be more specific, you’ll be getting NBA 2K20, FIFA 20 and Madden NFL 20. A solid lineup. 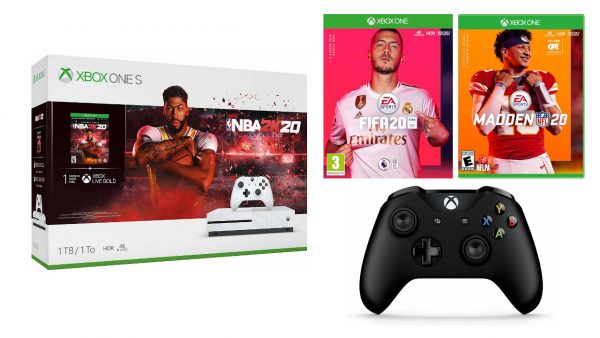 As an added bonus, you’ll also get an extra controller so you can get multiplayer matches on the go right away. A PowerA Wired Controller comes free. However, you can choose to pay an extra $24.99 and you’ll get an official Xbox One Controller instead. If you really need that official touch!

It’s a slightly different spin on the Xbox One bundle Walmart was running just last week. That one included an Xbox One S with a whole army of Call of Duty games for the same $300 price point. Meanwhile, Amazon US has an Xbox One S 1TB Gears 5 Bundle for $299 still, too!

If either of those aren’t for you, then do keep an eye on our Xbox Black Friday deals hub over the next couple of weeks as more offers are set to go live. We already know a couple of the Xbox One bundles coming this year thanks to the latest Best Buy Black Friday ad. One is an Xbox One X 1TB Star Wars Jedi: Fallen Order Deluxe Edition Bundle for just $349.99!

Not the console for you? No worries! We’re also regularly updating our PS4 Black Friday and Nintendo Switch Black Friday deals pages for the rest of November, too. Make sure you bookmark those pages and check back in regularly to find all the latest offers.