Today is N7 Day, and BioWare is celebrating the Mass Effect holiday in Anthem.

BioWare has created some new cosmetic content for Anthem in celebration of Mass Effect’s N7 Day. Unfortunately, none of this content is free, so you’ll have to fork out some cash if you want to cosplay as a Mass Effect character in Anthem.

The developer created four unique skins, each one available only to one of Anthem’s Javelins. The Ranger gets a Turian skin, whereas the Interceptor has a killer Quarian look. Predictably, the Colossus received a Krogan skin, and the Storm is sporting Liara’s look – an Asari.

Each skin is priced 850 Shards, which is about $8. The good news is that you can spend the in-game currency to buy them, with each coming in at 61,000.

Alongside the new skins, the store has also been updated with a new emote: the Shepard Shuffle, and a new wrap to change the look of all four into that seen in Mass Effect Andromeda.

All of these items are available until November 12. Here’s a screen of all four, via Reddit user CptnCASx. 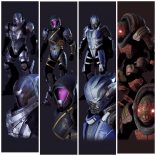