Death Stranding is quite unlike anything you’ve ever played. Yes, there’s some action in it. Yes, there’s some stealth. Essentially, though, this is a mountaineering game, and you need to approach it differently to most things you’ve played. Here are some tips to get you through.

Take your time, hurry up – the choice is yours, don’t be late 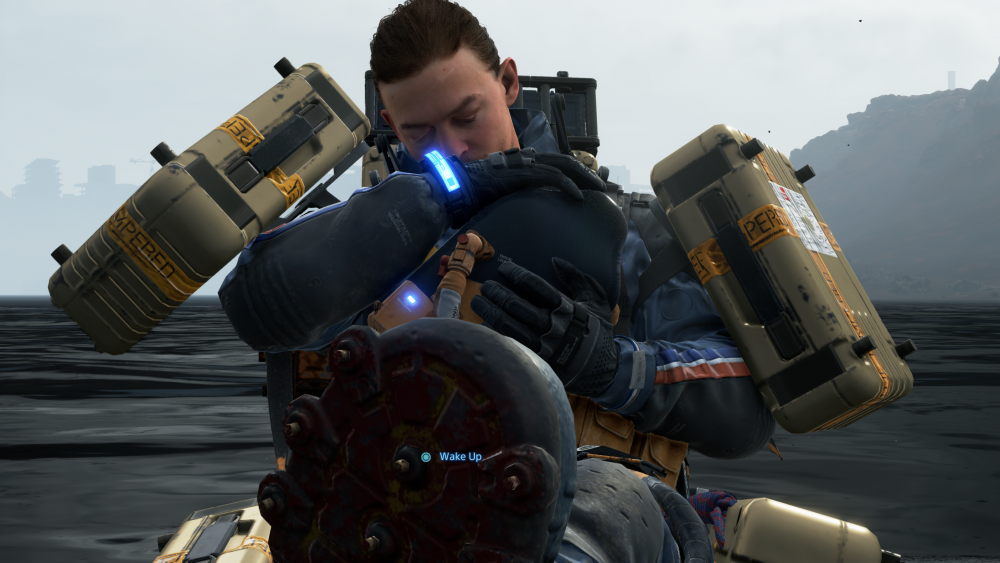 Death Stranding is all about making deliveries as efficiently as possible. At the end of each mission, you’ll be ranked for time taken, the route you took, and how damaged your cargo is. If you’re looking to get the best rank, efficiency is more important than rushing. You always get plenty of time to complete missions – even the ones on a timer – and you can pretty much always take a leisurely walk to your destination.

Before you head out on a mission, preparation is key. Always stack yourself up with at least three climbing anchors, a spare pair of boots, and three ladders. Make sure you have some repair spray in case you get caught in the rain, so you can at least repair your goods before turning them in. Pack as light as you can, but make sure you bring everything you need.

For example, later on, you get loads of different types of guns. For the most part, you don’t need to take them with you at all and you’d be better served taking a remote carrier or some extra PCCs – fancy suitcases that can be turned into bridges and other useful bits of equipment.

It’s also a good idea to bring up your map and plot out a route – you can actually draw a route from your destination and trace it back to you. Later, you get access to weather stations so you can predict timefall showers, meaning you can avoid the rain and the enemy BTs that spawn within these weather patterns, forcing you to slowly creep through. 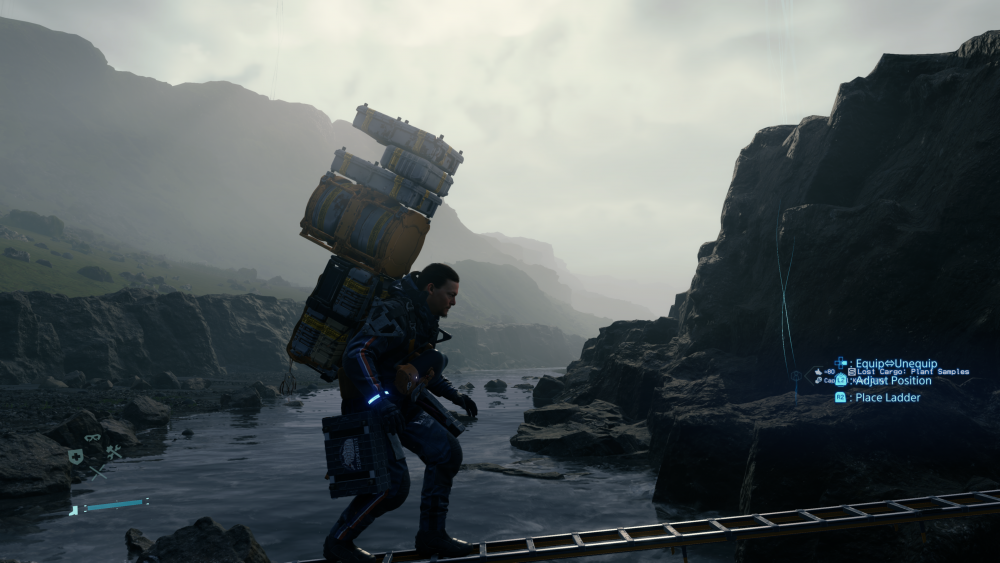 Whether it be those ghostly BTs or the cargo-stealing Mules, the best thing to do is avoid confrontation entirely in Death Stranding. It might take a while to slowly creep through a BT-infested zone, but it’ll take you much longer if you’re caught and dragged into a long-winded boss fight. There’s also a chance you’ll ruin some cargo – especially if you’ve been tasked with transporting fragile goods.

The same goes for those Mules. They want your cargo and they will attack you to get it, smashing it off your back and stealing it or damaging it. If you haven’t stacked yourself up too high, you can creep around in the long grass, but that’s not always viable.

My personal favourite tactic is to just shed whatever cargo their sensors pinged, so long as it’s not what your mission requires. Head into the pause menu, transfer it into your hand and squeeze the trigger to keep it there. Now hit melee and let go of the trigger mid-swing, launching it away from you. They only care about the cargo, so they’ll ignore you and run to grab it, giving you a chance to escape. Decoy cargo is also handy for this.

If you do find yourself surrounded by Mules and unable to escape until you’ve dealt with them, use a PCC to create a postbox, store your goods inside, deal with them, then grab your gear once you’re done. You might even be able to steal one of their vehicles to make the rest of the trip easier.

One of the best pieces of equipment in Death Stranding are the ziplines. These are unlocked once you get Level 2 PCCs and allow you to create your own rail system, essentially. They link up over long distances, so you should be placing them as you go, filling the landscape with them so you can make subsequent journeys easier. You’ll also find that other players will build on top of your network of ziplines, increasing their range, once you start plonking them down. There’s nothing more satisfying than zipping over a mountain you just spent an hour schlepping over.

Outside of ziplines, it’s also always worth donating any metals, ceramics, and other materials you might be holding spare to road networks. These roads require cooperation from many players, but they’re invaluable once they’re set up, providing you with safe, fast passage for all vehicle types. That means you can use vehicles on them without using battery, so long as they’re on the chiral network. It also means you can lug a bit more gear without toppling over. If you want to help other players out, plonk a battery charging station half way along a long, winding road so people can charge up their suits and vehicles. Maybe someone else will repay the favour. 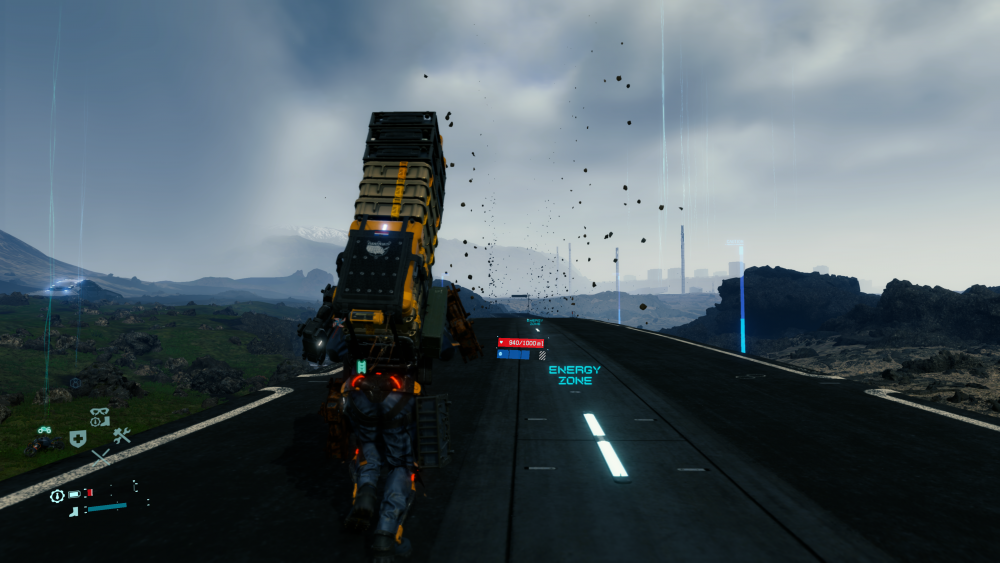 There’s an entire system in Death Stranding built around setting up your center of gravity when you attach Cargo to Sam. However, it’s always best to click ‘auto arrange’ before heading off.

As soon as you have everything attached to Sam, click that option to optimise your carrying capacity and make the act of lugging all that kit slightly easier. Speaking of which, if you do end up with a massive tower on your back, beware of low ceilings – these can knock your top row off, damaging them in the process.

It’s also a good idea to get into the habit of holding L2 and R2 everywhere you go, holding the straps on your luggage for extra balance. 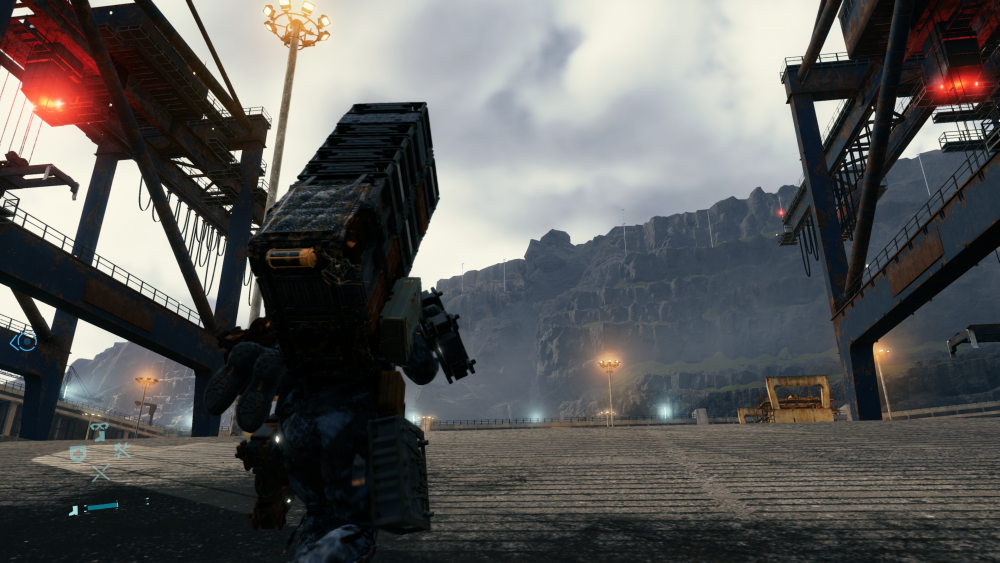 While you should only pack what you need for the mission you’re on, Sam is an absolute machine when it comes to lugging cargo. It’s always a good idea to take on two missions at once, prioritising the one closest to you and plotting a route between two missions. It will save you time and you’ll make much faster progress this way without having to haul yourself back to where you came from.

When you drop stuff off at terminals, it’s also a good idea to grab yet another job from your destination while you’re there. Later, you unlock autonomous robots and you should always have these filling in on a side mission for you – they might not get you the S rank, but it means you have progress ticking away while you’re busy with other stuff.

Check out our Death Stranding review for more.