Humble has announced that Soulcalibur 6, Yakuza Kiwami and My Time at Portia are the early unlock games in the December Humble Monthly Bundle.

It’s the second time in a row Humble has offered up three early unlock games as opposed to the usual two – and there are definitely some absolute steals considering the $12 entry free. 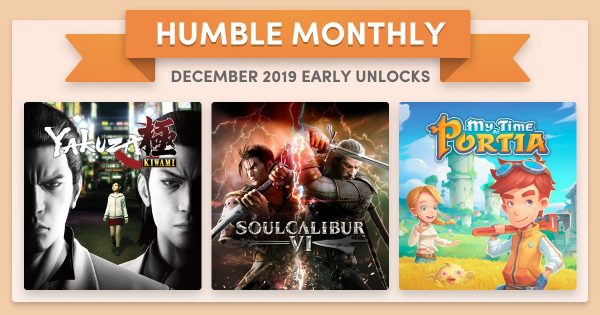 Let’s start with Yakuza Kiwami, a remake of the first game in the ever-expanding barmy action series. Over recent years, it’s grown from well-loved cult favourite to a blockbuster series in its own right. If you’re interested in seeing what all the fuss is about then you’d probably be happy enough with just that game for the price.

However, you also get Soulcalibur 6 too. The latest entry in the fighter series automatically receives a load of bonus points from me simply because of the inclusion of Geralt as a playable character. In all seriousness, though, there are a few flaws but it’s a solid fighter if you’re a fan of the genre.

Lastly, there’s My Time At Portia. It’s been described as a cross between Harvest Moon, Stardew Valley and Animal Crossing. Just hearing those three games should make your decision about whether it’s for you immediately apparent!

And you can get all three of them immediately when you pay $12 for the December Humble Monthly. Other games to come in the bundle will be confirmed at a later date – in four week’s time, to be precise. You can expect around another five or six mid-range release or indies, I think.

With the announcement of the December bundle, we now also know all the extra games in the November Humble Monthly. Things had already started off strong with Call of Duty: WW2, Crash Bandicoot N. Sane Trilogy and the Spyro Reignited Trilogy as the early unlocks for that month. They’re now joined by Shenmue I & II, 11-11 Memories Retold, Synthetik: Legion Rising, Evergarden, and a new Humble Original, Operator.

You’ll soon have to rethink your Humble Monthly membership as it changes to Humble Choice. This new version of their subscription service gets rid of the mystery element and instead gives you a fixed number of games to pick from each month. Depending on your membership tier, you’ll be able to choose a certain number of games each month. This will result in a price increase, but current Humble Monthly subscribers can continue to pay $12 a month for the most benefits. You can find out more about Humble Choice right here.

Meanhile, at Jelly Deals, we’ve got even more gaming offers. You’ll be able to find the best price for Red Dead Redemption 2 on PC, our top picks for the best Nintendo Switch SD card and so much more!