It may only be 1st November but that hasn’t stopped Microsoft already confirming a pair of Xbox One Black Friday deals it will be running during this year’s sales bonanza.

Both the Xbox Blog and Major Nelson dropped the news today. What’s been revealed so far is nothing truly spectacular, but gives us a strong early indication of the Xbox One offers we can expect to see this Black Friday.

First up, there’s going to be 50% off Sea of Thieves: Anniversary Edition. That’ll bring the price down to an attractive $25. Would that be enough to tempt you to set sail on the high seas searching for treasure and other player’s ships to scupper? It’s not a bad price for the game if you’d rather not get it on Xbox Game Pass Ultimate, instead. 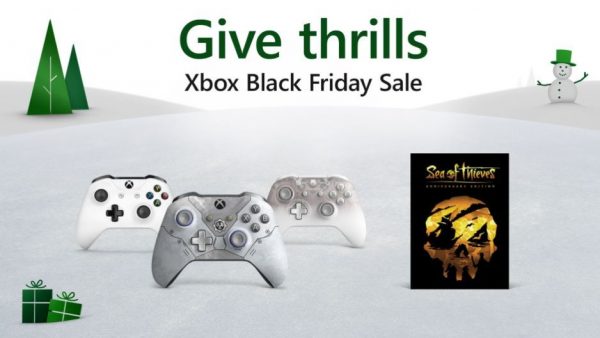 The second Xbox One Black Friday deal confirmed today was for $20 off select Xbox Wireless Controllers. Microsoft hasn’t specified that all controllers will be available with a price cut, but new versions including the Night Ops Camo Special Edition, Sport Blue Special Edition and Gears 5 Kait Diaz Limited Edition will feature.

With some of the more basic Xbox controller variants already selling for $40, it’s tough to see those ones dropping any lower. Still, if you like a bit of flair to your controllers then these savings are welcome.

Microsoft has described this as just the ‘First Wave’ of their Xbox One Black Friday sale, so you can be sure as Marcus Fenix loves curb-stomping Locust that even bigger bargains are coming. It’s unclear whether these are coming outside of the US. Nevertheless, you can follow all the best Xbox One Black Friday deals as and when they go live with us. We’ve also got regularly updated hubs on all the PS4 Black Friday offers and Nintendo Switch Black Friday discounts out there, too.

These offers aren’t live just yet, though. Microsoft has announced you’ll be able to get them from 24th November through to 2nd December. In addition, a special episode of Inside Xbox Live from X019 in London on 14th November at 12pm PT will reveal the full lineup of Xbox One Black Friday deals.

Until then, why not take yourself over to Jelly Deals to find some gaming offers that are currently available. We’ve got the best Xbox Game Pass Ultimate deal, some of our picks for the best Xbox One external hard drives and the best price for Red Dead 2 on PC!