There are still a few days to go until November but Walmart has already gone live with a Nintendo Switch bundle offer that would rival any Nintendo Switch Black Friday deal.

The generous create-your-own Nintendo Switch bundle includes the new Neon Red/Blue with improved battery life, a choice between four top Nintendo Switch games and a bonus accessory. All of that for just $329.99. 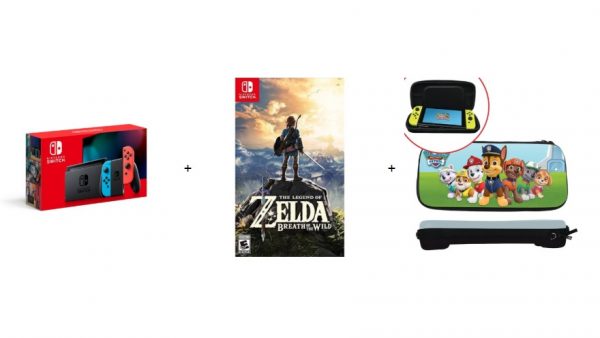 And when I say top Nintendo Switch games, I’m not lying. You’ll have to pick between The Legend of Zelda: Breath of the Wild, Super Mario Odyssey, Super Mario Party and Splatoon 2.

All four games should comfortably make their way into your Switch library, but if you’re just starting out then away would be suitable choices. If you forced me to pick, though, I’d have to take Breath of the Wild for its sheer invention and expansiveness.

Considering that you’d normally be expected to pay at least $50 for any of those four games included in the bundle, you can see just how good of an offer this is. When comparing it to the Nintendo Switch Black Friday deals we expect to see next month, this is about as good as we expected.

Of course, there may be an extra surprise during the mega sales event, but if you want to pull the trigger on your new console purchase now then there’s nothing better than this.

Meanwhile, there are still some excellent price cuts on Xbox One consoles and controllers at Amazon US. These likely won’t be available for much longer, though.

For those of you holding off, you can ensure you’re the first to know about all the best Nintendo Switch Black Friday deals right here. Over the coming weeks, we’ll continue to track any PS4 Black Friday offers and Xbox One Black Friday discounts as and when they become available.

And for even more bargains, you can always give Jelly Deals a follow. Pick yourself up one of these bundles and then you can check out our guides to the best Nintendo Switch SD card, best Nintendo Switch Lite accessories and where you can get a Switch Online membership for the best price.