Star Wars Jedi: Fallen Order is not the game I thought it was – thankfully, it’s better.

Video game previews are a funny old business. Being thrown into the middle of a game for a few hours of largely disjointed play is obviously not the best way to experience and understand something, but it’s often the best opportunity we have before launch. Sometimes, rarely, a preview crops up that really, properly enhances one’s understanding of a game – and my recent hands-on with Star Wars Jedi: Fallen Order is one such occasion. More interesting still, I walked away from the preview with completely different expectations for the final release – and all to the positive.

So here’s the thing: Star Wars Jedi: Fallen Order might be a third-person character action game directed by God of War alumni Stig Asmussen, but there’s quite a bit more to it than that description might suggest. Members of Respawn repeatedly reiterate that the development of the game was undertaken “lightsaber first”, where the number one priority at all times was to ensure that swinging the iconic laser sword feels good. It does. But it’s also one part of a greater whole, and it’s much else about the game that truly excites me.

So what is it? Well, to talk in reductive similarity terms, Jedi: Fallen Order is a little bit like Metroid. It has a dash of Dark Souls, too, and I heard more than a few people at the event muse on the ways in which its combat feels similar to Sekiro. In some moments, the game leans hard into Zelda or Tomb Raider-like puzzles. It also has an open-ended, fun heart that in some ways has echoes of BioWare’s Star Wars and science fiction games. Basically, you will indeed be slicing stormtroopers down in satisfying lightsaber combat, but you’ll be doing a lot else besides. Crucially, that other stuff may serve to elevate the whole experience.

It’s almost unfair to call this other stuff something as reductive as “other stuff”. For me it was the heart of my three-hour hands-on. In it, I guide protagonist Cal across a planet, tracing the steps of a Jedi Master who had been obsessively researching an ancient civilization. I won’t get into the weeds on the story details to avoid spoilers, but the short version is that his research might lead to a macguffin that could be useful in battling the Empire – which is at this point in the Star Wars canon at the height of its power.

This mission starts out in a more typical action game way – you move from area to area, fighting enemies and doing some light platforming and traversal between battles. The combat feels good; it’s weighty, and the lightsaber-prioritized development has clearly worked out well. Basic enemies like simple stormtroopers are downed in one hit, as is appropriate for the dismembering weapon. A well-timed tap of the block button to parry a blaster bolt can send it hurtling back towards a weakly armored enemy to down them in one shot. Others have weapons that are impervious to your blade, which turns the game into a tense back-and-forth of blocks, parries and stamina that resembles FromSoftware’s finest action RPGs.

Also clearly borrowed from those games is the rest system, where Cal can meditate at certain spots to refill his health and his restorative power-ups. It’s at meditation points that you also spend your skill points on an extensive skill tree that’s branches into three key pillars: Force, Lightsaber and Survival. Resting at a meditation point causes the enemies in the world to respawn, just like Souls, and if you die the enemy that killed you must be targeted to get your lost EXP back – that is all very familiar. There’s solidly tweakable difficulty options for those who want to merely experience the story, with the difficulties (Story Mode, Jedi Knight, Jedi Master and Jedi Grand Master) upping the challenge in three primary areas: parry timing, damage taken and enemy aggression.

Quickly enough that combat is intersected with other things, however. There’s exploration across an open-ended zone and a 3D holographic map with colour-coded doors that feels like it’s straight out of Metroid. Scattered across that map are chests packed with optional unlocks for surprisingly deep cosmetic customisation. You’ll use your force powers to manipulate the environment to help with that traversal. The game encourages exploration by straight up showing you a current map completion percentage, plus a counter of how many chests and secrets remain to be found. During this story-mandated visit to this planet you might not be able to get them all, however – you might need a force power or droid upgrade from another planet in order to unlock certain passageways – again embracing that Metroid-style backtracking tempo.

Soon your quest drags Cal down into an actual proper dungeon, and it’s here that the Zelda or Tomb Raider vibes begin to rear their head. Of course there’s still combat – in the dungeon there are cool, ancient automatons you have to do battle with – but the game shifts, becoming primarily puzzle-driven. In this instance the puzzles are about wind and physics, with Cal flicking switches to redirect an air current around rooms in order to push objects around to create a path. Later in the dungeon, he unlocks force push, and that in turn opens up new possibilities right the way across the map, as you can now knock down crumbling walls. The flow of all this feels amazing; there’s no sag or let-up, and no individual element outstays its welcome before it’s given a break for something else to emerge. Obviously maintaining this across one three-hour chunk is easier than across an entire game, but I’m left with great hope that Respawn will nail it.

Jedi: Fallen Order feels slick and expensive. It feels like a Star Wars movie. At one point the game throws me into the cockpit of an imperial walker and has the game resemble a shooter for a moment – it’s a great cinematic story set-piece that also features some player control, but then it’s back to exploration across another, different, equally large map on a different planet. The quality of my first planetary spelunking adventure meant as I began this second expedition just as excited. 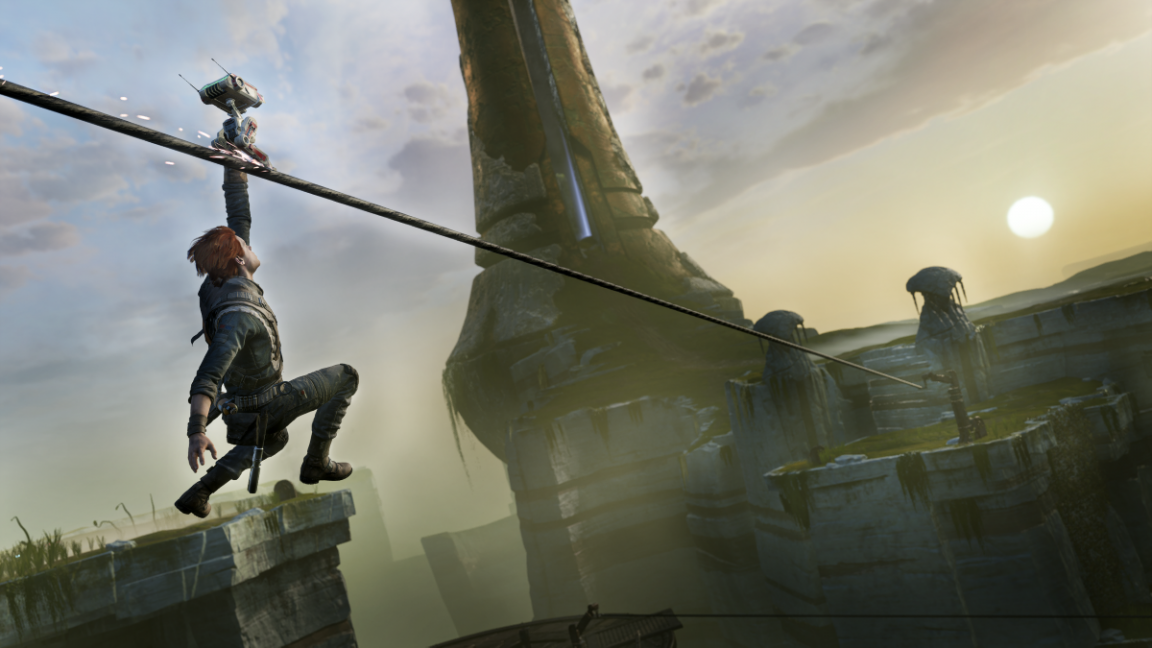 Last but most certainly not least comes the narrative. Repsawn talk a big game about this. At the opening of the preview event, members of the development team gush about being privileged to create something that will “live in the lore forever”, fundamentally changing Star Wars in some way. More important than plot beats is tone, however – and it feels like this game is a far better attempt at that than EA’s previous effort.

I enjoyed Star Wars Battlefront 2’s campaign well-enough, but I did find it rather po-faced and serious. It’s a military shooter set in the Star Wars world, and takes the military tone you’d expect. Despite this being set at arguably the darkest point in the Star Wars timeline, Fallen Order is fun; the interactions between Cal and the crew of the ship you planet hop on are great. Mentor figure Cere has a tragic backstory, but it’s often undercut by a quip from alien pilot Greez. All of this feels very true to the Star Wars movies, and in the world of games I’m most reminded of the beloved Knights of the Old Republic – an extremely favorable comparison to make. Indeed, the act of running a quick lap of your ship between missions, taking time to talk to your friends and tinker with your lightsaber feels positively Biowareian, despite this not really being much like a RPG otherwise.

It probably goes without saying that I liked my three hours with Star Wars Jedi: Fallen Order a lot. This wasn’t my anticipated outcome, however. Prior to actually playing it, Fallen Order was a low-priority must-play for me. Maybe I’d wait for a price drop or deal, or wait for it to hit EA Access. After the hands-on, I know that is no longer an option. I want to play it as soon as possible. Of all the possible outcomes from a preview, that is arguably the best possible one. I just now hope the rest of the game can live up to the two planets I played.

Disclosure: This preview took place at an event by publisher EA with travel and accommodation provided.