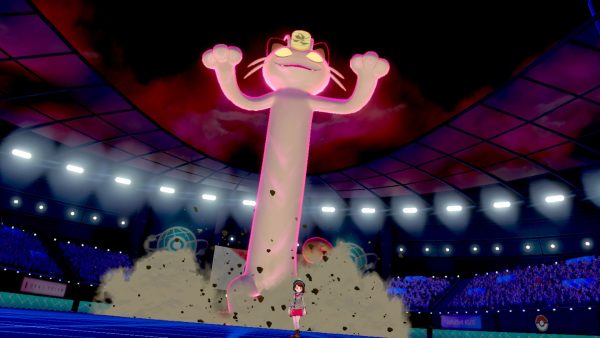 In a new video, Nintendo has revealed a few more of the Gigantamax Pokemon coming to Pokemon Sword and Shield – including a massive electric Pikachu, a giant Eevee who performs a huge cuddle attack, a supersized Butterfree, and a terrifying Charizard with huge fiery wing-span.

A Gigantamaxed form of Meowth, who stretches into a giant meme-like Long Cat, is an early purchase bonus which players can access using the Get via Interet option in Mystery Gift. The limited-time long-Meowth is available from November 15 until January 15. Gigantamax Pikachu can be unlocked when with save data from Pokémon Let’s Go, Pikachu! on Switch, while you can get a hold of a Gigantamax Eevee using save data for Pokémon Let’s Go, Eevee!

Gigantamaxing is a feature that bumps up a Pokemon’s battle stats, while increasing their size and changing their appearance – transforming them from cute and cuddle to enormous fighting champs.

Pokémon Sword and Shield will launch November 15 for the Nintendo Switch.