Now that the Garden of Salvation raid has been completed, the Vex Offensive quest is now available for Shadowkeep players.

When you log in, you’ll receive a message asking your Guardian to meet with Ikora in the Tower to discuss the pending Vex invasion.

After speaking with her, she’ll give you a quest item called the Vex Invasion Emergent Protocol. She’ll also have new Vex related bounties available for you which can drop some powerful new gear. 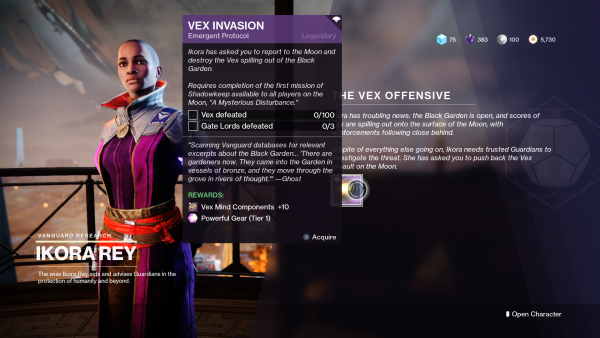 On the Moon, you’ll see three Vex Goblin head icons near Anchor of Light, Hellmouth and Archer’s Line that represent Vex Invasion Zones. You’ll also see a campaign marker called the Vex Offensive, but you can’t access it until you complete a step called Eyes on the Moon. 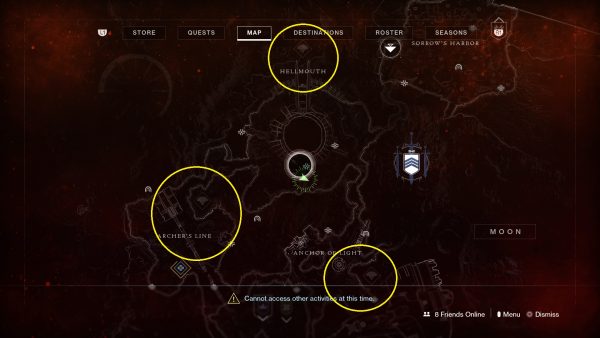 You’ll see a white lightning storm forming and a message will pop up when a group of Vex are nearby. I waited for about 10 minutes before three waves appeared which spawned enough Vex for me to complete the quest step.

They won’t show up exactly where the goblin heads are on the map, so you might need to explore the surrounding areas to find them.

Eyes on the Moon will drop when you’ve finished this step, so head back to speak to Eris Morn and she’ll give you a Raid Banner and unlock the Vex Offensive activity. 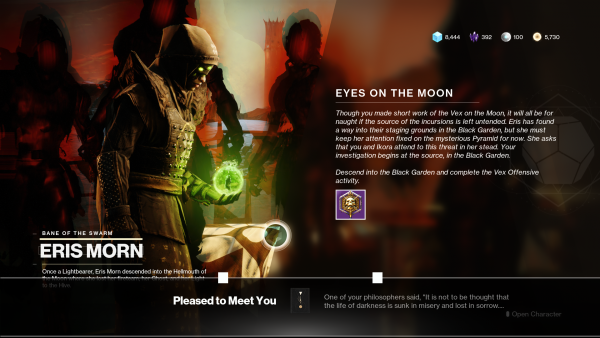 The Vex Offensive supports up to six players through matchmaking. The recommended Power level starts at 750, so you’ll be able to jump in straight away. It’s reminiscent of the Dark Forest in that you move through the map and kill clusters of Vex as you go.

Some enemies have Overload or Barrier buffs that require mods to beat but the Vex Offensive seems to drop weapons and gear that will help you overcome anything it throws at you.

There’s also a weekly progress bar that will unlock better loot as you progress, so it’s worth doing a few runs a day if you’re looking to quickly increase your Power and get some Vex armour.

If you speak with Ikora after a few runs, she’ll mention The Undying Mind, which was both a boss and a Strike in Destiny, so it looks like they’ll be making a return as a Nightmare later in the season on November 19 as part of the Vex Offensive: Final Assault.

For more Shadowkeep guides, check out our pages on how to get the Deathbringer Exotic Rocket Launcher, how to complete the Nightmare Essence Cleansing and how to get Phantasmal Fragments, Cores, and access Nightmare Hunts.