If it weren’t for the printing costs, Activision would send you a certificate of authenticity with every copy of Call of Duty – the kind you’d get with a commemorative coin ordered off the television.

As much as they want to sell you on the bombast of the campaign and the tension of the multiplayer, they really want you to know that COD is true to its real-life inspiration. That’s why, in the run up to release, you’ll typically see interviews and trailers starring military consultants, grizzled Seals talking up the influence of their experience.

For Call of Duty: Modern Warfare, there’s a new quirk to that process. To its credit, Infinity Ward has committed to showing Middle Eastern perspectives on contemporary conflict, and to that end it consulted Hollie McKay, a war reporter for Fox News. McKay’s journalism is the kind that typically requires a flak jacket, taking her to Iraq and Syria where, in the latter case, she covered a US missile attack on Bahsar al-Assad’s alleged chemical weapons facilities.

“I was able to give the team a deeper understanding of what it’s like on the ground, and what the civilians who have been caught in the crossfire are experiencing,” she says in a behind the scenes trailer.

Infinity Ward has studied proxy wars, in which superpowers tend to fund and train local soldiers to further their own goals in a region, taking on none of the risk to life or accountability themselves. It’s a worthy subject, and though there are likely to be missteps in the execution, the thoughtfulness of Infinite Warfare’s campaign and the prevelence of Naughty Dog veterans at the studio bodes well.

There are, however, only so many stories you can tell from behind the barrel of a gun, and the reality of civilian life during conflict is not one of them. For that you have to leave the FPS genre entirely, stepping into the world of management and simulation, where you’ll find This War of Mine.

This War of Mine came out in 2014, but it’s still in development and selling better than ever, to the tune of 4.5 million copies. That’s because it offers a view shared by no other war game, in which suffering can’t be averted by the intervention of a special ops team – only endured. 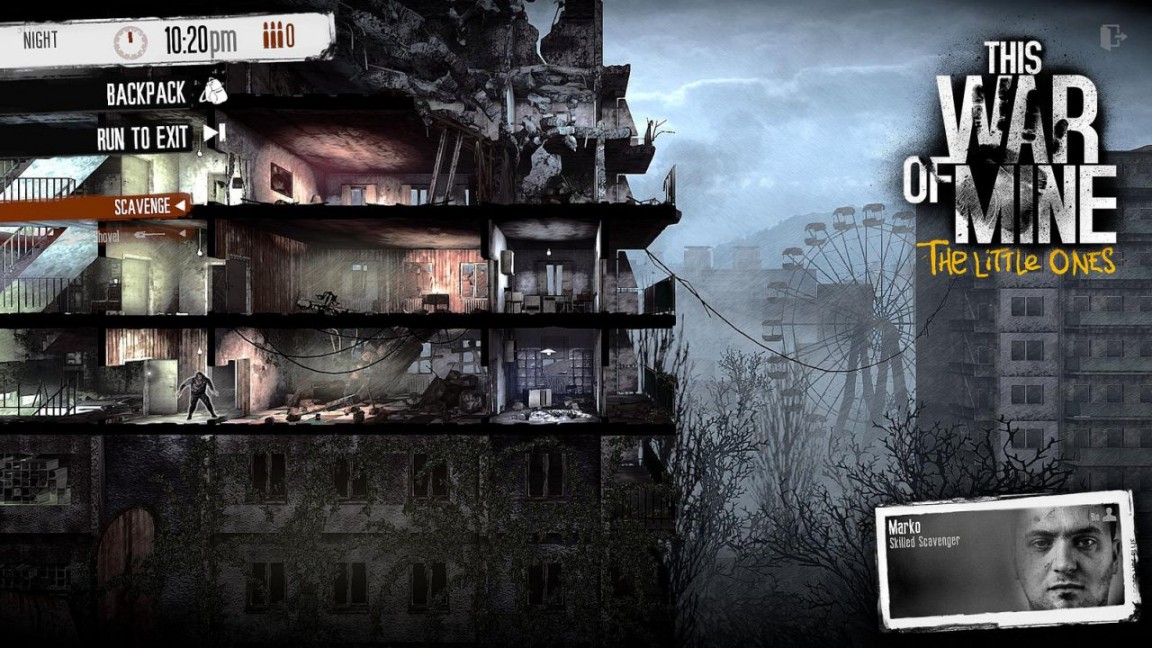 The games of 11 Bit Studios always had one foot in reality – even its tower defence series, Anomaly, situated alien invasion in Baghdad and Tokyo. But for This War of Mine, it drew on Europe’s recent history of violence – the plight of people displaced in Kosovo and trapped in Sarajevo in the ‘90s. It pulled, too, from its own Polish past, particularly the devastation of Warsaw after the doomed 1944 Uprising against the Nazis.

What emerged was a game dubbed The Grims. As in Maxis’ hugely popular lifestyle sim, you govern a small group of cohabitants, reminding them to cook, eat, sleep, and go out to win bread for the household. Except that here bread would be considered a precious commodity. Any white picket fence surrounding your dilapidated address would soon be disassembled for firewood as winter begins to seep through the slats in the boarded up windows.

Pogoren, the fictional city in This War of Mine, is under siege. It doesn’t matter which side is winning; the ideals in dispute are irrelevant to the citizenry beneath the mortars. They’re ordinary people, in the sense that everybody is made ordinary by war – professional footballers, professors, rich and poor, all levelled when the banks are closed and the stadiums emptied. The only goal is survival, and not in the Steam bestseller sense of punching trees and taking names. Instead, you keep the heater topped up to stave off illness, build beds to support the bruised backs of your wounded, and hoard books and smokes to ward off misery. The problem being that, well, you’ll always have more than one problem at once. Books and cigarettes don’t seem so sacred once you realise you can burn one for warmth and sell the other for food. 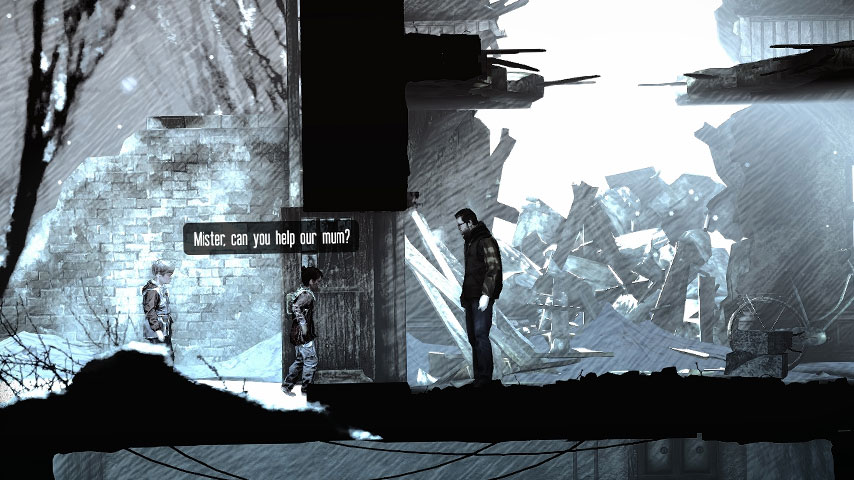 What little you have must be scrounged at great personal risk under cover of night, since snipers make daytime exploration impossible. The shooters are indiscriminate, and so in turn are your survivors – they distrust soldiers of every stripe, having watched them bomb the city flat and steal the international aid that followed. Men in balaclavas with rifles all look the same in the dark; if you cross paths with one, it’s best to hide, or failing that, run.

It’s easy to describe what makes This War Of Mine unique; harder to explain why you’d stick with it. Partly it’s the way 11 Bit forefronts small pleasures – an uplifting conversation, or the incongrous birdsong on the radio’s weather channel. But mainly, it’s the compulsive loop of constant problem solving – the clear sense of purpose that sends you out into the night time after time. It’s a reminder that surviving is a habit that human beings have, even in the most difficult of circumstances, when the future only seems to be drifting further out of reach.

Videogames at large have a different view of problem solving in war: one where action fixes the world quickly and decisively. In a medium which too often defaults to deference of the military, This War Of Mine questions the justification for tearing apart any nation, under any banner.