You may already be familiar with it, but there’s a genre of strategy games called 4X, an acronym for “explore, expand, exploit and exterminate”. It’s a reflection of what you do in these games – and, chillingly, also the very behaviours that sum up the crux of colonialism. First coined by writer Alan Emrich back in 1993 to describe the sci-fi strategy title Master of Orion, the genre has since proliferated with its games carrying a distinct style and format, such as Sid Meier’s Civilization series.

Driven by these motivations, games like these, as well as others like Age of Empires and Far Cry 3, have a history of gamifying colonialism; the allure of discovering and liberating a fantastical and uncharted world has long captured the imaginations of many, turning these into exciting journeys players are only too thrilled to embark on. In these titles, plenty of your activities are centered around the behaviours as encapsulated by the 4X acronym.

But even though it’s not a 4X game, Greedfall is the most recent title that plays on existing colonial assumptions, although its colonialist leanings are a bit more implicit than what its narrative suggests. Set in a far-flung island paradise that has been discovered by power hungry colonialists, it’s an open-world RPG that puts you in the shoes of a diplomat: De Sardet, the legate of a faction called the Congregation of Merchants.

Their task is to find a cure for a mysterious illness that has plagued their home, as well as carry out diplomatic responsibilities on the island, like facilitating agreements and treaties between the warring factions: the religious fanatics known as the Theleme, the science zealots called the Bridge Alliance, the seafaring pirates referred to as the Nauts, and the indigenous islanders who had been living on the island since time immemorial.

It’s not all yawn-inducing busywork, of course, since you’ll be devoting a lot of hours wandering the wilderness, talking to people, discovering the island’s origins, harvesting resources, fighting armies and upgrading weapons and armour. Along the way, you’ll also even find out a little bit more about your personal history. 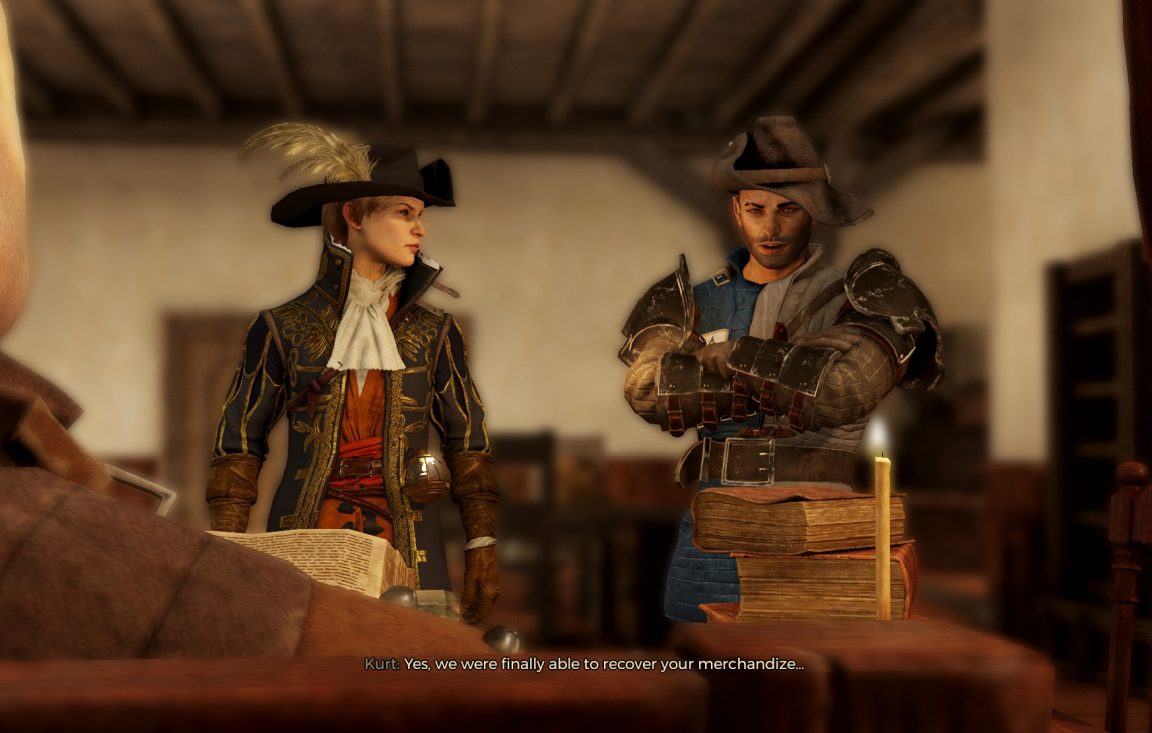 On the surface, it seems that Greedfall doesn’t want to be yet another colonist simulator. It’s clearly aware that it’s stepping on well-trodden ground with its colonialist themes, and is thus wary about embracing them too overtly. Take for instance how it refrains from trite, lazy characterisations about the islanders as bloodthirsty savages or cannibals, who only want to adorn their necks and homes with the polished skulls of their enemies. Neither are these folks depicted as untainted by the corrupting influence of civilisation; there are definitely less-than-savoury company within their ranks.

Another instance is how the colonists are often portrayed as misguided or just plain dastardly; most of them tend to deride the islanders by referring to them as “savages”, while still blatantly attempting to subjugate them by force or through deceit. And aside from painting the invaders as universally white, the factions also feature diverse characters; the Bridge Alliance, for instance, is largely inspired by Ottoman Turks, judging from their attire. The message is clear: colonialism isn’t a great idea because hey, look at these great acts of evil by the colonists. Although it can be rather hackneyed, the narrative at least steers towards sympathy for the islanders — the colonised, rather than the colonisers.

But Greedfall’s attempts at a more nuanced conversation around colonialism is undercut by its open-world RPG framework, which largely focuses on the excitement of partaking in the game’s more imperialist activities. From The Witcher 3 to Skyrim, the characteristics of open-world RPGs draw attention to some of Greedfall’s egregious colonialist problems — underscoring the activities that lets players explore, expand, exploit and exterminate with impunity. 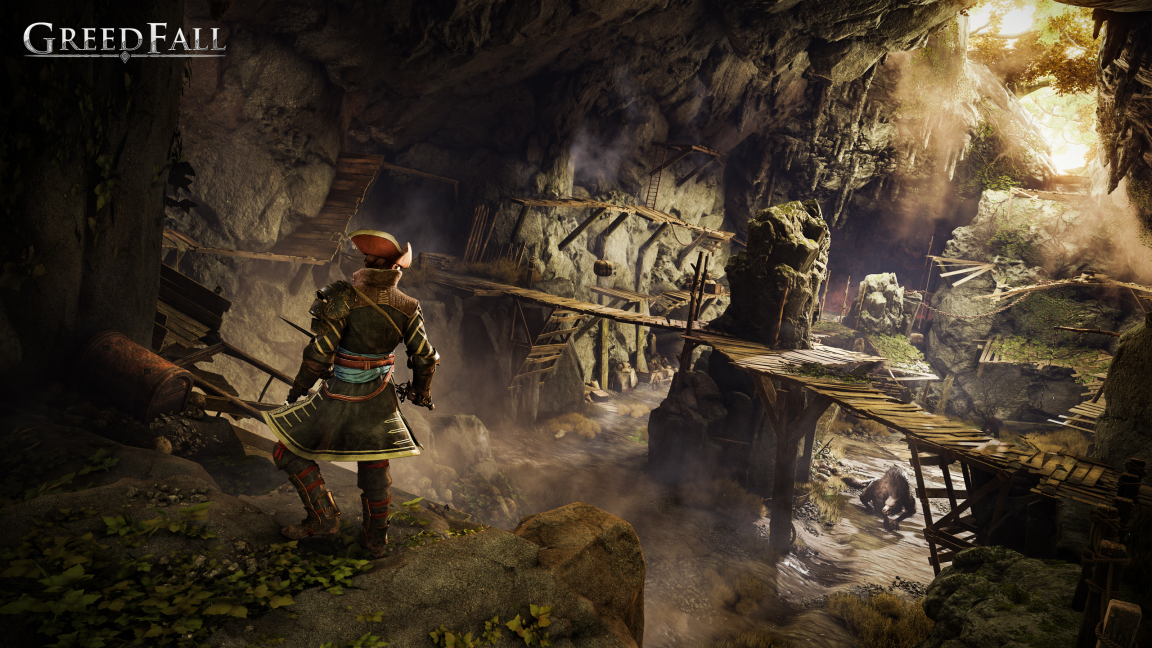 Take for instance exploration, which forms a massive part of Greedfall’s identity around presenting an uncharted world waiting to be explored by players. While many characters have acknowledged that the islanders have been on this isle for centuries, the RPG system still frames these lands as undiscovered territories that are awaiting discovery by the player. One side quest involves De Sardet’s mentor, who requested that De Sardet set up camps across the island so the Congregation of Merchants can find out more about the land and essentially expand their influence, as if they’re previously uninhabited and unknown.

That’s an implicit statement about turning these places, with unexplored territories clouded in a black haze, into your own digital playground — akin to markers that brings to mind intrusive, colonial conquests. In fact, the Congregation of Merchants have already done this by establishing a city on the island, with the faction even renaming the place under the anglicised name, New Serene.

The game’s crafting system, yet another staple in most RPGs, is also another concern. Resources are integral for crafting upgrades for your weapons and armour, as well as brewing potions crucial for enhancing your stats. These include raw materials such as leather, iron ores, monster parts, as well as a variety of common and rare herbs. These resources are usually in abundance and are brimming in crates found in towns, or more frequently in the wilderness as you gather herbs from the land’s flora or hunt its magical beasts. It’s not hard to see how this mirrors the exploitative practice of plundering indigenous lands either for economic or personal gains, with the game subtly rewarding you for doing so in the form of boosted stats or additional skills; after all, it’s otherwise difficult to advance in the game without crafting upgrades for your equipment.

Violence, too, is more often than not the solution to many of the conflicts De Sardet faces, even though they often exclaim that this mostly boils down to self-defense against aggressive actors. While confrontations against the islanders are typically rare unless you force their hand, combat situations against the island’s revered guardians — the Nadaig, some of whom were islanders before they were transformed — are common, even looked forward to as they provide an enjoyable challenge for the battle-hardened De Sardet to conquer and pit their skills against. These must be defeated, typically, for the player to continue on their quests, even if these are to broker peace between the islanders and the colonialist factions.

Then there’s one of the most fundamental issues with Greedfall, which is especially apparent when looked at alongside the open-world RPG frame: De Sardet themselves. As a diplomat, your character is placed at the centre of the endless conflict, with your decisions inevitably deciding what happens to each faction. 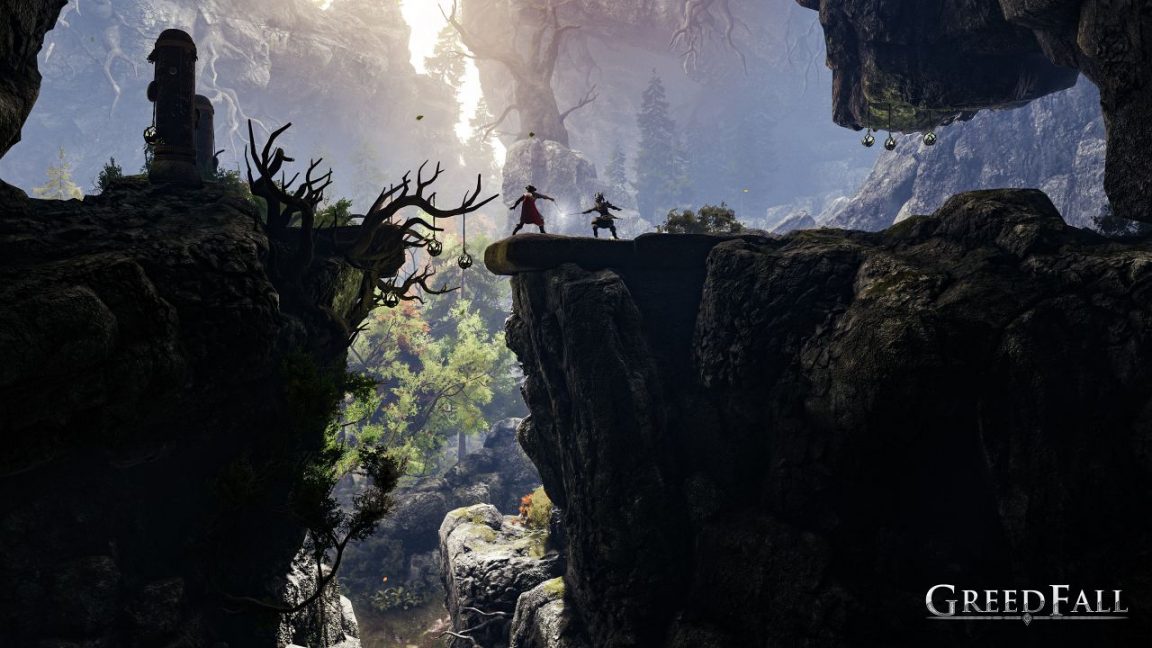 This is emblematic of the great man theory, as introduced by the Scottish philosopher Thomas Carlyle, who refers to how history is chronicled through the actions of a single hero, “…the soul of the whole world’s history, it may justly be considered, were the history of these (men)”. At the same time, this also carries shades of the white saviour trope — the notion that the white character has to rescue other characters from their plight — which is also popularly employed in many fiction with colonialist themes. This remains true, even if the De Sardet the players choose for themselves isn’t explicitly white.

While De Sardet displays little desire for colonialism themselves, it doesn’t take away the fact that their decisions will determine the course or the game’s finale — a feature that inadvertently takes away the agency of the colonised. Ultimately, the RPG framework puts the player in control of the circumstances unfolding on the island.

What’s bold about Greedfall is that the game doesn’t shy away from addressing its colonialist roots; characters often refer to several factions plainly as colonists, while the oppressive treatment of the indigenous people, like how the Theleme routinely try to coerce the islanders into “enlightenment”, are usually frowned upon. But this doesn’t take away how Greedfall may have muddled any anti-colonialist messages it has by telling its tale as an open-world RPG, a system that’s rigged towards bringing out the worst of the game’s imperialist impulses. As a player, and no matter what side you take, you’ll inevitably be playing out a colonialist fantasy.