The third to-do list in Untitled Goose Game has you running between two gardens as you attempt to play dress up, steal slippers and continue being a honking nuisance.

Once you’ve antagonised the groundskeeper in the garden and bullied a child up the High Street, you can make your way to the back gardens. Follow the path around then follow the path to the north when the route splits. Keep going until you see some wonky fence posts and bash your way through into a garden.

At the bottom of the garden, you’ll see a yellow ribbon that will give you temporary access to the next garden. Head into the woman’s garden and head up towards the console table with the drawer. Pull the drawer out and the table will collapse, giving you a new route into the first garden.

Now that you’ve found your way around, let’s take a look at the to-do list. 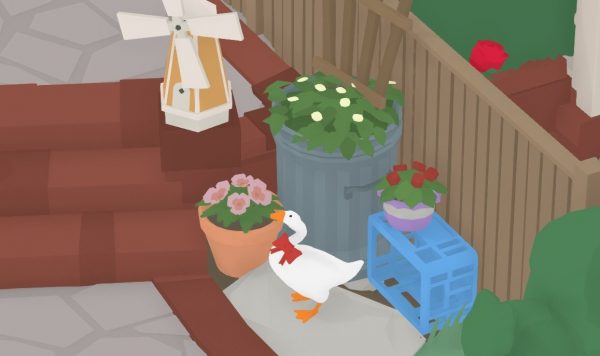 Make the man spit out his tea, go barefoot and smash the purple vase

The easiest task is making the man spit out his tea. Watch for him taking a sip, then ring the giant bell in the woman’s garden. Next, pinch the red ribbon from the goose statue and place it elsewhere. While the woman isn’t looking, drag the statue away and when prompted, interact with the space left behind. She’ll then return and put the red bow on you, making your goose look very dapper.

Next, you need to steal the man’s slippers so that he’s barefooted. Head back into the man’s garden, wait until he’s reading the newspaper then nick one of his slippers, putting it in the fountain. He’ll then sit back down and drink some tea, extending the foot with the other slipper on it, so rinse and repeat.

To have someone smash the fancy vase, pick it up from the woman’s garden and run through to the next garden and drop it where the man can see it. He’ll pick it up and chuck it over the fence, where it’ll smash. 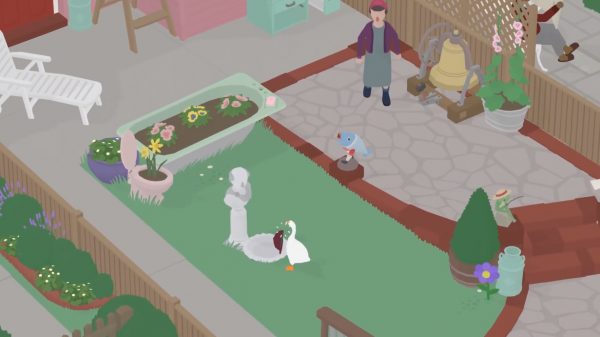 Do the washing and dress up the bust

The next two tasks are a bit fiddly and require going back and forth between the two gardens.

To do the washing, grab the bra and both socks from the washing line and put them in the fountain at the bottom of the man’s garden. You’ll also need to drop in the bar of soap, which you can find on the bath in the woman’s garden. You should already have at least one slipper in there, too, which completes the task.

Finally, you need to get someone to prune the prize rose. Drag the rose planter into the one that’s level with the woman’s goose-shaped bush. Then, head into the woman’s garden and peck at the bush until she comes to trim it, accidentally severing the rose, too.

Now that you’ve caused a neighbourhood feud, it’s time to head off to the pub.