Xur is back this week with new stock in Destiny 2.

It’s Friday, which means Destiny 2 players can once again interact with the game’s staple vendor, Xur.

This week in Destiny 2, you will find your man standing around Winding Cove in the EDZ on Earth.

Exotics on sale this week include a grenade launcher, two sets of gauntlets and leg armor. 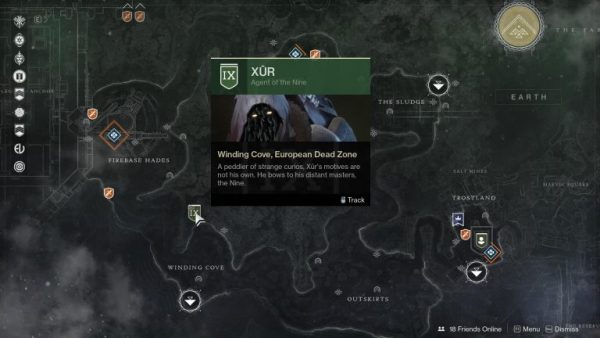 The Exotic Weapon this week is the grenade launcher The Colony which launched with Curse of Osiris. This Void grenade launcher fires little robot spiders instead of standard explosives, and they chase after nearby enemies. It reloads itself even as you’re holding and also shoots 140 rounds (or spiders in this case) per minute, which is rather nice.

Perks not only include Insectoid Robot Grenades, but Linear Compensator ensures the barrel is well-balanced and provides a slightly increased projectile speed. While the blast radius on The Colony isn’t very wide, this perk increases the blast radius from what it would be normally.