Legendary Bounties will be a weekly feature in Red Dead Online, so here’s where to find and capture your first target: Barbarella Alcazar.

Before you can take on this bounty, you’ll need to have your Bounty Hunter License, which you can get this by visiting the Legendary Bounty Hunter in Rhodes.

The first thing you’ll want to do is head to the bounty board and choose Barbarella’s wanted poster. It’ll point you in the direction of Gaptooth Ridge, so head on over but make sure you have enough ammo and health items.

It would be a good idea to complete this bounty as part of a Posse and bring a Bounty Wagon as this will be quite a difficult fight. Or, if you’re feeling risky, try it on your own like the mad maverick you are.

You can repeat this bounty at different star levels, which means it gets progressively more difficult. At level four and five you’ll need to bring in additional gang members alongside Barbarella, which is easily done with a Posse.

You can choose to kill Barbarella or bring her and a few others back alive, but you’ll get less of a reward if she’s dead. It’s worth noting that some players have said their rewards were smaller if Barbella or her gang mates are unconscious when returned to the jail, so keep them alive and alert for the best reward.

Gaptooth Ridge is just to the left of Tumbleweed on the map. There’s a jail in Tumbleweed, too, so you won’t need to travel at the end of this bouty to turn her in.

Once you reach Gaptooth Ridge, you’ll be able to find Barbarella in a mining tower in the area directly below the G on the map. 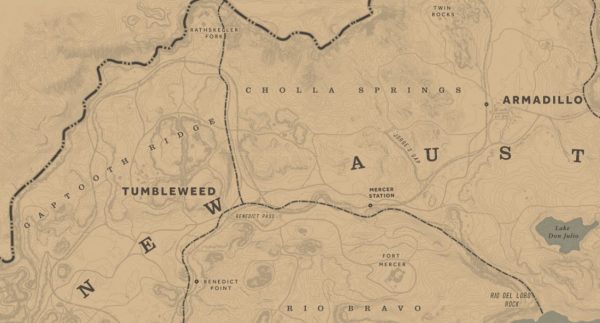 How you approach the base is up to you, though it would be a good idea to use your bow to silently take out enemies you see walking around the gang’s base. Just remember to move the bodies so you can remain undiscovered for as long as possible.

Fortunately, there are lots of crates and wagons to hide behind, so whether you’re attempting this solo or as part of a group, you can expect to remain hidden if you manage to pull off decent headshots.

When it comes to capturing Barbarella, equip your lasso and use it to tie her up. If you’re in a Posse, one of you can grab her and run back to the Bounty Wagon while the others deal with the remaining gang members. If you’re playing solo, you can tie her up then make a break for it, but you’ll keep dropping her if you’re hit too many times.

You’ll be up against 20 or more gang members so this bounty can take a while to complete, depending on your approach. Remember to capture at least two gang members if you’re playing on a higher difficulty.

Once in the back of the Bounty Wagon or on the back of your horse, take Barbarella and any captured gang members to the nearest jail to complete the bounty and get your reward.

And that’s it! For more Red Dead Online guides, check out our pages on how to make more money and how to unlock all weapons, Ability Cards and special items.