While the notion of putting Batman to bed might generate hilarious notions of Adam West’s caped crusader tucking in after a hard day’s crime-fighting, ending its critically acclaimed Arkham trilogy proved no laughing matter for developer Rocksteady.

Through its handling of the dark knight in Asylum and City, the studio had demonstrated not once, but twice that making a great superhero video game wasn’t impossible. From 2011 onwards, Rocksteady sought to repeat this success with the final game in the series: Batman: Arkham Knight.

“There aren’t many who can say they’ve written for Batman – I’m extremely grateful to have had that chance,” Phil Huxley, former senior scriptwriter at Rocksteady, says. During his time writing Batman for Arkham Knight, Huxley never lost sight of how big a deal the project was – both for the players eager to see how this arc would end and for himself as a batfan. Not only would it mark Huxley’s first time scripting Batman, but also the first game in the series where the story wouldn’t be spearheaded by Batman: The Animated Series legend Paul Dini. 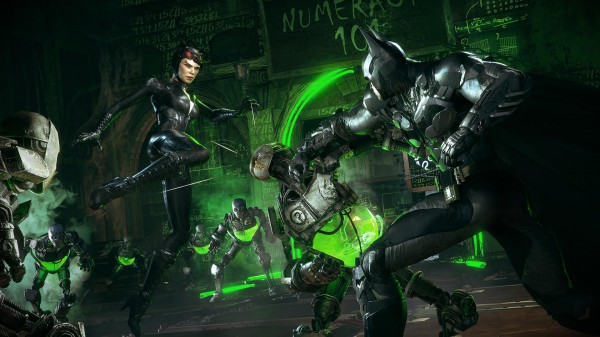 Phil Huxley and the rest of the writing team were left to live up to this looming shadow. “The Burton films were my first true introduction to Batman,” Huxley explains. “I’d seen the ‘60s TV show, but Keaton’s portrayal felt adult and darker – Nicholson’s Joker genuinely terrified me. “The iconic Miller cover of Batman silhouetted by lightning was burned into my brain when I was young. As I got older, I started to read the classics: Dark Knight Returns, Arkham Asylum, Killing Joke…”

Though he may have joined the project when the main story beats had already been set, Huxley was keen to impart his own early impressions of the character. “Batman was different from other superheroes: he was human and flawed, which intrigued me,” Huxley remembers. Arkham Knight was all about tapping into the deeper inner workings of Batman’s psyche.

Arkham Knight is a special case within Rocksteady’s trilogy in that Batman is fighting his own inner demons as well as the villainous outside forces doing dark work in Gotham city. “It felt like the game was saying something about Batman’s legacy,” Huxley says, “in the sense that his past was coming back to haunt him.” This eventually materialised as a toxin-induced mental manifestation of arch enemy The Joker, who, throughout the entire course of the game, pokes and prods Batman to have him question his stout moral code. 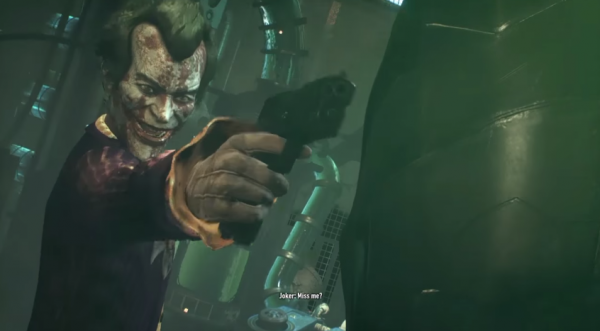 “I’d love to take credit for that idea, but the decision had already been made when I joined the team,” Huxley laughs. “I remember playing a build on my first day and thinking, ‘they can’t have a Batman game without Joker, can they?’ But then still being floored by that reveal in ACE Chemicals. The more you thought about it, the more you realised the potential of that character. It could’ve come across as gimmicky, but it made so much sense narratively and thematically.”

Any good comic writer will tell you that a superhero is only as good as his greatest villain, making it hard for Rocksteady to ignore the clown-shaped elephant in the room. Even then, however, Arkham Knight chose to handle this sheer, almost inevitability in a way you would expect, and Huxley reveals that this new direction led to much excitement amongst the narrative team. “Writing for Joker was such fun,” he explains. “The other writers and I would try and compete for penning the grimmest line. It could be a welcomed relief after writing [NPC] barks all day!”

The inclusion of Joker as an almost sidekick and constant companion allowed Rocksteady to really explore the dynamic between these two adversaries. Even with Joker turned to ash, Batman can’t get him out of his head. Deep down, the Caped Crusader is as obsessed with his arch nemesis as Joker was with him. As Two Face would probably say, they’re two sides of the same coin. 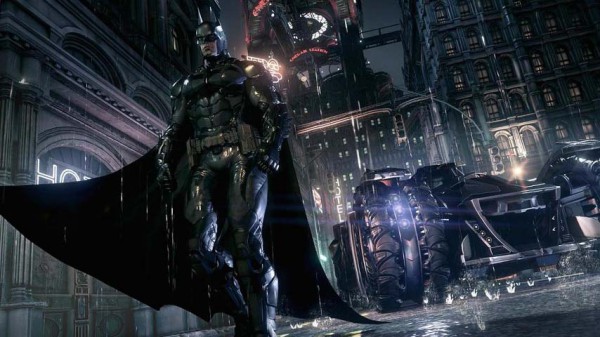 It’s ironic, really – Joker may be dead in Arkham Knight, but he features more prominently and gets more time on-screen than in previous games, while allowing other villains room to breathe. It paved the way for Scarecrow, a standout adversary in the first game, to be the central villain this time around. This lent itself well to exploring Batman’s philosophy and the overarching ideology of fear – it all seemed more apt than ever.

While many may wince at the game’s more controversial additions (the plentiful batmobile sections, larger rendition of Gotham, etc.), it’s clear Arkham Knight set to do more than simply offer players a chance to “be the batman”, but also to feel like him by way of digging in deeper into his ethos and inner thinking – all as a means to deliver a suitable final chapter.

With this is mind, Huxley is quick to respond when asked what he thinks it is that Arkham Knight does differently than any other interpretation. “It’s unapologetic about the power fantasy. You are the Batman and you experience that more than any other game,” he says. Reflecting back now, Huxley sits proud of what him and the narrative team accomplished. “Having the opportunity to work within that universe and with those characters was daunting at times, but ultimately a huge joy.”

With Rocksteady today often being attributed for changing the licenced videogame tide and showing everyone else how to expertly do it justice, it’s easy to forget not just what the studio did for games, but the 70-year legacy of Batman and the surrounding lore, too. By stripping the character back to his core, choosing to explore the man within the suit as well as out, and using his inner fears to do so, Batman: Arkham Knight arguably gave us the best goodbye to Batman seen in recent years across all mediums.

You can currently get the Batman Arkham and Lego games for free on the Epic Games Store.