If you’ve managed to blast your way through the main story in Borderlands 3, you might be looking for more endgame content in the Proving Grounds.

For players who want more of a challenge, your best bet is to find the Proving Grounds. You’ll need to have finished the main storyline in Borderlands 3, so if you aren’t that far into the story, consider this your one and only spoiler warning.

The Proving Grounds are similar to dungeons where you’ll progress through a series of three consecutive gauntlets filled with enemies and one boss that you have to defeat in 30 minutes or less.

There will be certain conditions and objectives you’ll have to complete, such as finish a run with 25 minutes left on the clock, defeat a specific enemy or complete it without dying. You can also play around the difficulty level and the more challenging you make it, the better loot you’ll receive.

Thanks to our pals at Arekkz for making this handy video guide.

How to unlock the Proving Grounds

Once you’ve completed the main story, you’ll be able to find secret beacons scattered across the planet which can be used to find coordinates to new planets.

There are six Proving Grounds available right now, with more coming in future updates and DLC.

You’ll be able to find the beacons across a range of planets. Once found, you’ll need to rock up to the beacon and inspect it, then you’ll get a message instructing you to find a Trial, such as the Trial of Cunning. This will add the location to your bridge map and you’ll be able to travel to it from Sanctuary. 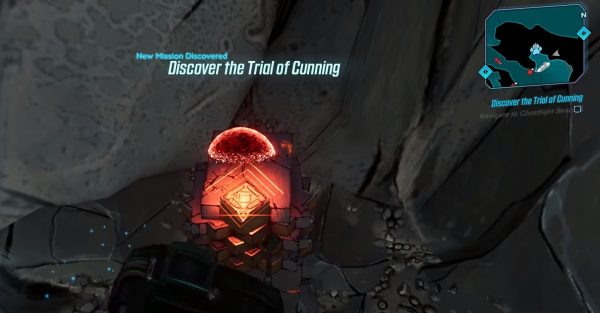 Where to find the beacons

The first two beacons are located on Pandora. For the Trial of Cunning, head over to The Splinterlands and head to a point near the centre of the map. You’ll find a beacon by finding an item with a yellow exclamation mark above it, so interact with it to unlock the Trial and location.

Once you’ve activated a Trial, you’ll have a quick mission to complete then it’s on to the gauntlet.

There are five more Trials to find, which are:

If you’re looking for more Borderlands 3 guides, then check out our best character builds, locked chest guide and how to get some free Golden Keys for easy legendary loot.