You can now get Battletech for only $12 in the October Humble Monthly Bundle.

The tactical mech combat game from the folks behind the brilliant Shadowrun Returns is the only game to be announced as an early unlock title for the upcoming Humble Monthly Bundle. Usually, we’d expect to see two games confirmed at this stage, but maybe another reveal is coming in the near future?

Nevertheless, getting just Battletech for $12 right now is a terrific deal considering it should set you back around $40 at full price on Steam. I’d pay that for a game that lets me orchestrate smashy robot mech battles! That’s before the other half a dozen or so games are unlocked on 4th October. 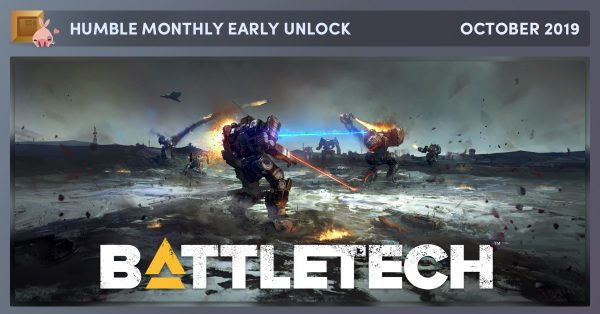 This new bundle announcement also means that current Humble Monthly subscribers now have access to the full lineup of games from the September bundle. Both Slay the Spire and Squad were the early unlock titles for that month. They’re now joined by Distance, Guacamelee! 2, Mothergunship, State of Mind, God’s Trigger, and a new Humble Original, Shady Knight.

Even though Humble Monthly is a subscription service, you can always immediately cancel your membership after you’ve grabbed the bundle you’re after. All games will remain yours to own forever, but you will lose access to the Humble Trove and the 20% discount on Humble Store purchases. Decide to commit to a yearly subscription, though, and you’ll get one month for free.

Meanwhile, you can join us at Jelly Deals, where we’ve got guides to the best price for Borderlands 3, the top picks for a new Xbox One external hard drive and the best Nintendo Switch SD card.