All the Life Bearings and how to get the best outcome from each.

Man of Medan is a game about making difficult decisions in the moment, watching the rippling effects of those decisions play out across the central cast, and living with the consequences. It’s also a game about going back to undo all those horrible consequences, because you’re absolutely bound to slip up somewhere and accidentally doom your characters to some harrowing fate or other.

And it’s not always clearly telegraphed which decisions will lead to which outcomes, which is where Life Bearings – and this guide – come into play. In your character menu you’ll find a Life Bearings panel which tracks your choices and actions regarding the eight major turning points in the game, and these fill up as you play on.

What they don’t do, however, is tell you how you could have done things differently to get a different outcome. So let’s do that now. And just so we’re clear, there are hella spoilers below. 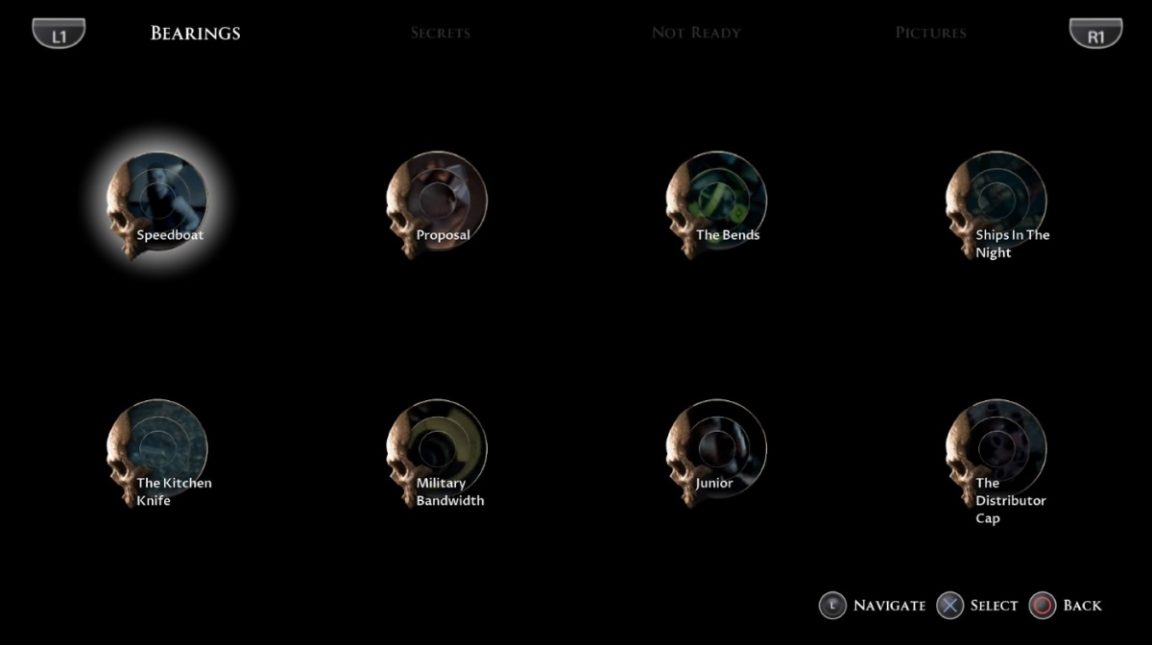 This one’s all about whether Conrad survives. When the pirates kidnap your party early on in the game, Conrad makes a play to escape by speedboat. You can’t actually stop him from at least trying to make his escape, but if you want to keep him alive, don’t go through with his plan to jump on the boat. Instead, opt for grabbing a weapon when you climb out of the window. This will trigger a standoff between Conrad and Olson. Eventually Olson will disarm you and drag you back below deck, but you’ll live to tell the tale.

The other variables in this Life Bearing pertain to the whereabouts of potential weapons. If you don’t bring the bangstick down onto the dive and use it on the door of the wreck, it’ll be available as a weapon in the standoff. Same goes for Alex’s knife.

Here’s a slightly lighter Life Bearing than the other life-or-death dilemmas. Should Alex propose to Julia or not? It’s up to you, and you get to make the call very early on. Alex confides in Brad that he’s planning to pop the question, so when Brad has the choice to either tell Alex to go with his gut or think things through, choose the first option to propose and the second not to. Easy. And no one’s dead!

This one’s another easily averted disaster. When Alex and Julia descend to the ocean floor to check out the wreck, there’s a bit of bother back on the surface when Conrad pisses off some local, er, ‘fishermen’. Halfway to the surface Alex and Julia see explosions – she’s understandably keen to get back to the boat and see if her bro’s alright.

To save Julia, simply follow Alex’s advice and take a few moments to decompress. Conrad and Fliss are fine on the boat – for now. They just set the BBQ on fire.

Ships in the Night

This one’s all about a coming together between Fliss and Brad midway through the game on the ship. Both freaked out, and with both potentially carrying weapons, things have the potential to get violent when they bump into each other by surprise.

If you don’t want Fliss and Brad to bludgeon each other to death, you can either elect not to pick up the giant spanner while playing as Brad a few minutes beforehand, or simply complete the action QTE sequence when they do meet each other, electing to dodge rather than attack. Brad will run off in a panicked fugue state, and both will be alive.

As with the above, this one’s about keeping Fliss from harm when she runs into a friendly on the ship – this time it’s Alex. Unfortunately Alex is tripping balls and thinks that Fliss is a two-headed nightmare cadaver, so if he’s carrying a weapon when he runs into her he’ll have the capacity to kill Fliss.

If you want to save Fliss, you can either ensure Alex isn’t armed when this encounter crops up by electing not to pick up the knife from the kitchen, or from one of the smaller cells later on, or you can simply choose not to attack the ‘monster’ when the QTEs appear even if you are carrying a blade. It won’t hurt you, because it’s just harmless ol’ Fliss.

One of Man of Medan’s trickiest outcomes, this. You may be pretty relieved to find a working radio on this 70-plus year old ship, and you may even be willing to overlook how improbable that is because you’re so keen to get off the sea and to safety. Go careful, though – yes, you can call for help by giving your coordinates and sending out a distress signal. But how are you going to explain what happened on this ship when the military men arrive?

If you do give coordinates and wait for the chopper to pick you up, you’ll end the game in military custody, being questioned about all the dead bodies aboard, and probably facing a very long time behind bars. Is it better than starving to death on the ship? Jury’s out, frankly.

To get the happiest ending, you’ll want to leave on the Duke of Milan instead (see Distributor Cap below). You can still go through all the motions to call in a rescue on the radio without any penalty though – just make sure you look after that distributor cap and get on the boat before the chopper arrives.

How to save Junior

Junior and his fellow kidnappers have put you through a lot. They ruined your night’s sleep, interrupted your dive, and to cap it all off they’ve dragged you to an abandoned ship full of bloody corpses. Still, when an opportunity arises to save Junior – the least despicable of the lot – from shooting himself in the midst of a fearful frenzy, your better instincts kick in.

To keep him alive, you’ll need to pick up the rebreather down in the engine room while playing as Alex and Julia, and successfully evade Olson when he chases you. Mess up the heartbeat QTE section and you’ll drop it when you run away from him.

Then when you’re talking to Junior, get him to breathe into the rebreather so that he’s no longer inhaling hallucinogenic gas. Easy.

Never have the condition and whereabouts of a distributor cap been so vital to the wellbeing of a gang of idiots. This one item is crucial for unlocking the best of Man of Medan’s endings, so for goodness’ sake look after it, yeah?

It’s easy to do so. On paper. Just jump down a deck to search for it when prompted, pick it up off Olson’s body, being extremely careful not to fail the QTEs when the rats attack, and you’ll be able to get the Duke of Milan started and leave that horrible ship. Fail said QTEs, and Alex will drop it down an elevator shaft where it will be instantly crushed.