It’s not like the last one was a pokey little game, but everything about Watch Dogs: Legion’s gameplay looks slicker and quicker, with some interesting new systems.

The demo I played at Gamescom 2019 started on the side streets of central London with a simple mission: head to a stronghold full of baddies and take out some high-value targets.

If you’ve had any experience with the last two main series games then you’ll find a lot of Legion familiar – especially the driving – but distinctly streamlined and with a fresh coat of neon-dipped dystopian paint, tinged with squalor and social injustice.

The cars and bikes might be more angular, and the night-time streets lit more harshly with dazzling pink and blue, but you still tear about with the same reckless feeling of speed. When I reach the hideout, Legion continues the work of Watch Dogs 2 by presenting a variety of options for solo infiltration.

Do I want to stealthily hack the front gate, slip inside, and take my oppressors out quietly? Or would I rather scout the area with a drone and use my remote abilities to cause distractions and explosions? Or do I just want to grab a nearby truck, smash through the fortification and shoot up the place? Then there’s always the choice of a mix of all three.

Scenarios like these are hardly new for the series, but there are a couple of things in Watch Dogs: Legion that shake up the formula – a greater emphasis on more powerful abilities, and drawing on your roster of recruits gathered from the droves of disaffected Londoners.

Once you’ve identified someone, all you have to do is complete a recruitment mission to add them to your team. Each person has a class specialising in combat, hacking, or stealth and can be called upon at any time to join the fun. Everyone also has specific buffs that enhance their equipment and abilities, so there’s sure to be a metagame of finding the perfect practitioners to fit your style.

This means that there’s an extra layer added to all of your options. An all-guns-blazing approach with a combat character works differently to the same angle with a hacker or infiltrator for instance. Where a warrior might try to tank some shots for a better opening, stealthier characters can drop out of sight, turn invisible, and create a line-of-sight that way.

In previous Watch Dogs games, I never felt like the abilities fit into the flow of combat very well; you either relied on them completely until you were found out and they went straight out the window, or remembered to use them every now and again during a firefight.

This time around your main ability icons take up more real estate on the screen and feel more integrated as a result. The one I used most was the aforementioned invisibility power, which can be deployed to great effect to reposition between waves of enemies.

Being able to change your playstyle to suit your mood and situation is a welcome addition. And from a story perspective, it makes more sense for a loosely associated group of resistance fighters to have varying approaches to a mission, going some way to solving Watch Dogs 2’s problem of playing as an ethical hacker that rocks up and destroys everything in their path. 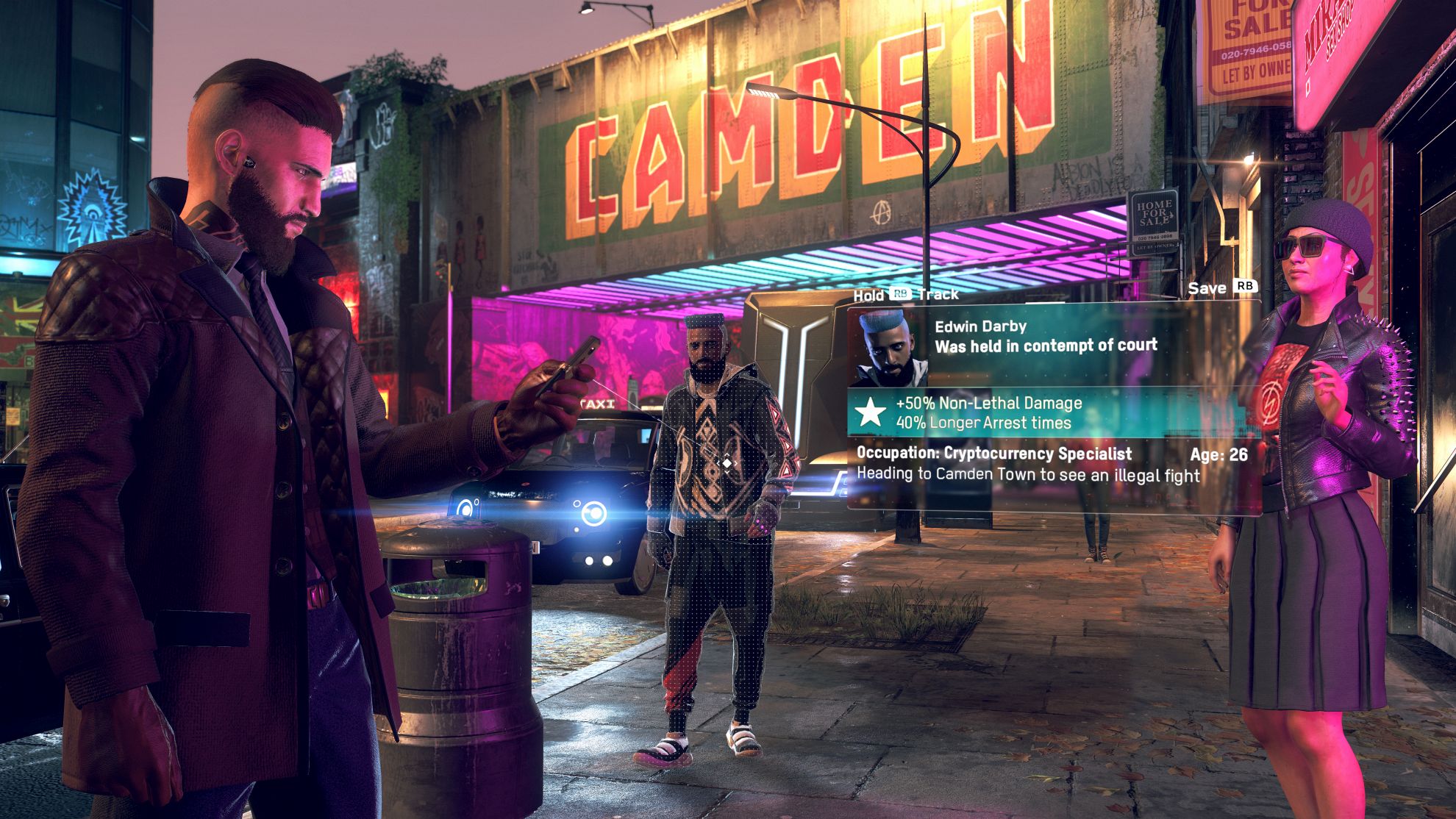 One unwelcome returning feature though is the stiffness of movement in tight spaces. I think it’s because of the player-character’s turning circle, which makes it easy to get caught in the wrong spot and really difficult to right yourself. It’ll definitely get you killed a few times in the game’s story, but is nothing more careful planning on a second run can’t fix.

With the targets neutralised, my objective shifted to a secret rendezvous near Covent Garden.

Being able to find objectives by googling landmarks is becoming a staple in Ubisoft open worlds – you could do it in Assassin’s Creed Odyssey and you can do it here.

Like San Francisco in the last game, Watch Dogs: Legion’s London is condensed but unmistakably the city you know. Distances might be shortened with roads cut out here and there, but there’s a lot of fun to be had navigating through actual geography.

In real-life London, I always get turned around near the National Gallery and Trafalgar Square and end up walking up the same side road – Orange Street – just above the National Portrait Gallery. It was a neat touch when exactly the same thing happened as I raced to collect a dead drop close to Nelson’s Column.

The real star of the show in the demo however was the real-time ray tracing and reflections in the PC version of the game.

It sounds really small, but when the dead drop turns into an ambush, scuttling away from the hyper-militarised police force is made all the more intense and atmospheric by the hazy ambient lighting of street lamps, the glistening damp pavements, and reflected blur of my motorbike whizzing past the banks of shopfronts.

Walking up to a car window and toggling the RTX drives home the difference, with everything looking like it’s been rollered with matte paint. The shiny, shiny mirror world won’t be for everyone, but I know where I’d rather play Watch Dogs: Legion if it’s available from launch on March 6, 2020.