Square Enix’s Avengers game clearly has a Stark Industries style budget, but it’s struggling to replicate the sheer power of its heroes.


It’s difficult to explain this sort of feeling after experiencing a game at preview. Marvel’s Avengers is clearly very technically accomplished and is obviously driven by some grand ideas – but despite being impressive on paper and even in the moment, the more I reflected on my hands-on time, the more initial surprise gave way to a growing realisation that it’s missing an excitement-inducing X-Factor.

To be clear, the section of the game I played is the tutorial mission, before the true depth of the game is fully revealed. This is the level that’s been shown off in a hands-off capacity since the game’s reveal at E3, except this time I got to play it. As a tutorial level, it’s a shallow look at what Avengers will generally have to offer – but it also broadly showcases the five core heroes in the game and their unique play-styles.

As mentioned, this game looks generally visually solid, some dodgy animation aside. I’ve heard some people suggesting it doesn’t, but I honestly don’t know what they’re on about. For some reason the technical clout of developer Crystal Dynamics seems to go somewhat unnoticed, but its Tomb Raider offerings were extremely accomplished and this is no different. The tutorial mission takes place largely along a crumbling Golden Gate Bridge, the destruction backgrounded to combat encounters but nevertheless impressive and striking. 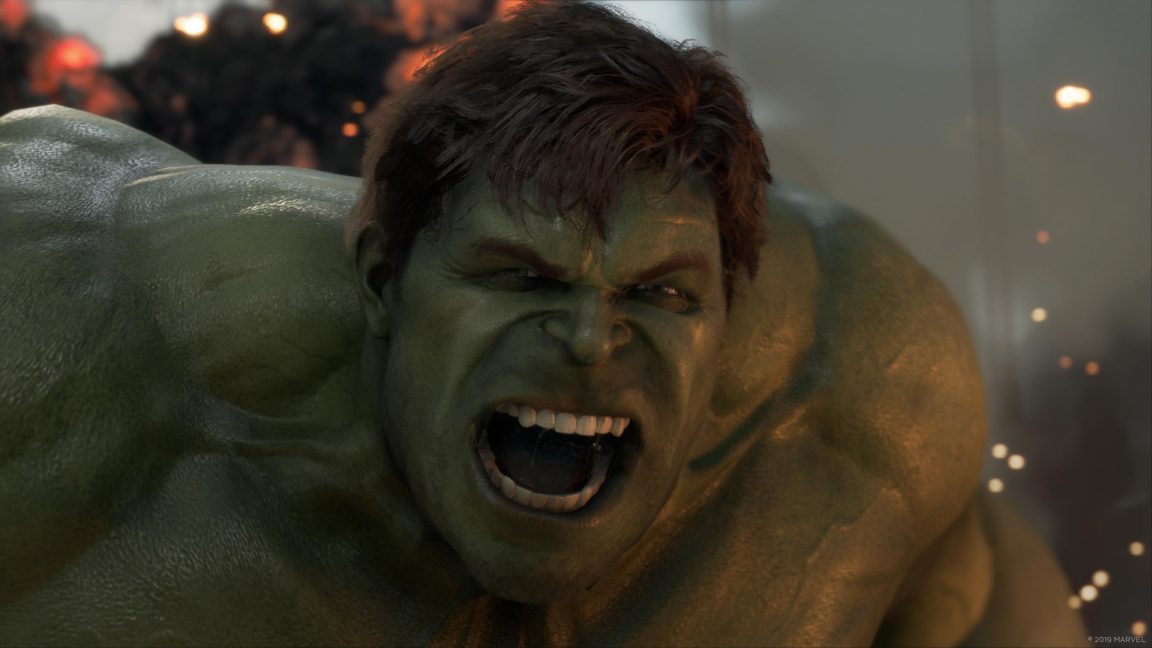 “You can spend skill points to turn Thor into a melee-favoring tank, or dump points into thunder-related powers to turn him into a spell-slinging warlock”

We must, of course, talk about the character designs. A big fuss was made of this at E3, including by me, but the initial read of these not-quite-movie versions of the characters as uncanny pretty quickly ebbs away once you see live play in motion. I buy these versions of the characters as original and valid, but it’s also fair to acknowledge their inspirations properly. The developers may downplay the influence of the Marvel Cinematic Universe, spending our meeting repeatedly stressing that they’re “drawing from 80 years of Marvel Comics history”, but when Tony Stark refers to Thor as ‘point break’, we all know where that joke is from.

Once you get into the action, it all feels like a solid foundation for a larger game. Each Avenger has a unique but appropriate move set, but there’s enough similarities between the quintet that you can hop from one to the other without much worry. One button will always unleash basic melee attacks, while another will always perform a heavier attack which can be charged. The nature of these attacks differs from hero to hero, but the principle is always the same. Pulling the left trigger kicks up third person shooter sights for aiming and shooting, but exactly what the move is varies by character. For Cap and Thor that involves tossing shields and hammers, while Iron Man and Black Widow will use repulsors and firearms respectively.

The Hulk is probably my favourite of the bunch. He can scoop enemies up into his hand and them use them to batter their mates. You can pick two different enemies up and then slam them together in an epic, painful-looking clap. It’s good stuff.

While not part of the playable demo, the developers on hand explained a little of the game’s structure. There’s full-blown RPG-style stats, gear and loot with a very Destiny-like work-in-progress menu – but despite this I’m told that Crystal Dynamics doesn’t regard Avengers as an RPG, but rather an action-adventure. Characters have skill trees to suit different styles of play. So some might spend skill points to turn Thor into a melee-favoring tank, while others might dump points into thunder-related powers to basically turn him into a spell-slinging warlock; the choice is yours. The development team members I speak to seem genuinely excited about the possibilities around this system, and tell a few very promising anecdotes from play-testing.

Much of the play-testing presumably is focused on making the game work right in multiplayer. Four-player co-op is a key component of Avengers, with the same sort of mission-based structure as a Monster Hunter World or Destiny – but there is a more strict delineation between solo and multiplayer content.

Specifically, single-player content is just that, and nothing more. They’re more specific missions, tailored to the skill set of one playable hero, allowing the game to do things like build an Iron Man focused level with a lot of flying. Playing these will unlock further progression, but so too will taking on co-op missions online. While the two remain discrete from each other, progression is intertwined.

All of this is decent, and to be honest when I see an XCOM-style map of different regions with lots of icons representing different mission types, I feel a completionist twinge. I could be so, so into this. But then, as I said, I can’t help but feel like something is missing. 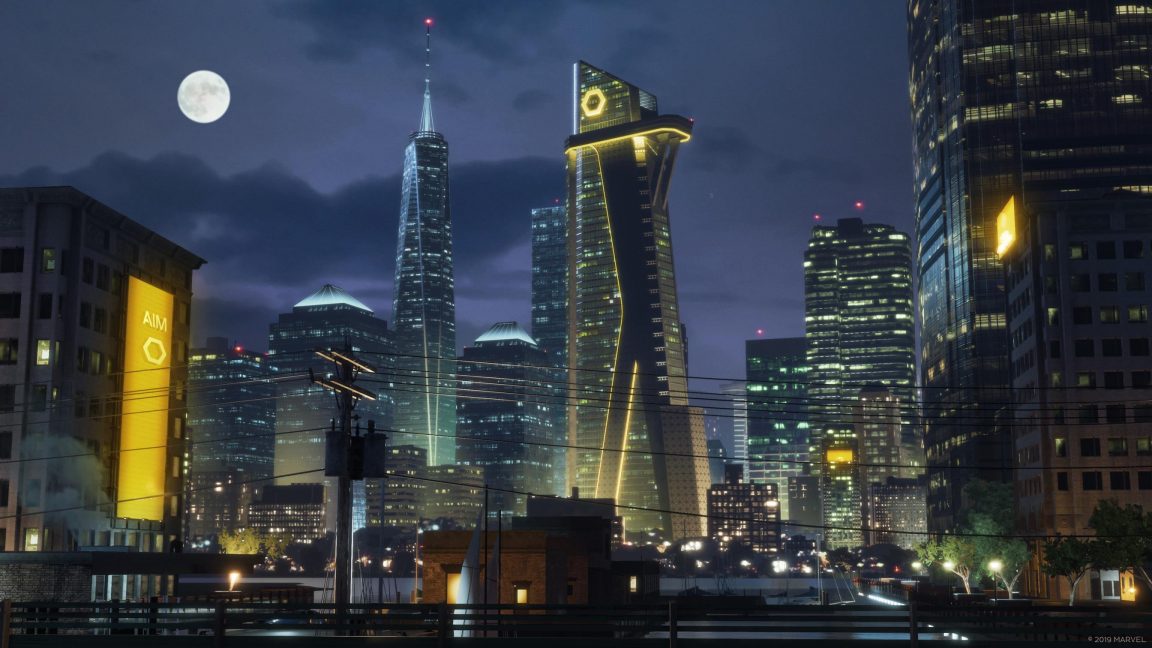 “It feels like a decent game with a lot of potential, but I’m not convinced I ever felt like one of these five classic heroes while playing the game”

Game development isn’t magic, but neither is it an exact science. Sometimes a little fairy dust is needed to bring a perfect formula to life. Another analogy is food: this is that perfect meal that is missing some sort of seasoning, or secret sauce, to supercharge it.

The more I reflect on my brief play session of Marvel’s Avengers, though, the more I wonder if that missing ingredient is simply feeling like an Avenger. The game is well-designed, moves well, and expensively lavish in presentation – and if it had another skin, I might be more enthused. It feels like a decent game with a lot of potential, but within this theme… I’m not convinced I ever felt like one of these five classic heroes while playing the game.

Part of it is perhaps a sort of cognitive dissonance driven by the game’s very structure; you are an all-powerful Avenger, but you’re fighting regular-ass soldiers (and later, robots and drones) that can still eat four hits from Thor’s hammer, or be smashed by Hulk and limp back upright again – which neuters that power fantasy. The moments when you feel most heroic are when you pop a rare super move, like using a charged unibeam to melt an enemy into nothing as Iron Man. But then you go back to smacking ’em. But to one-shot everybody also isn’t viable – and thus you’re trapped in the conundrum of video games about super heroes. This, incidentally, is why Batman and Spider-Man have worked in the past. They feel more vulnerable, and thus the fantasy remains intact. Thor, Banner and even Stark aren’t that.

Maybe that’s why I liked Captain America’s bits best. In moments, Crystal Dynamics’ Avengers is brilliant. I just hope, as the team tweaks towards release, they can find that brilliance more consistently.