After a lengthy early access period, space colony sim Oxygen Not Included is now out in the wild, so here are our top tips to get you started.

While the game opens with the prompt to command your Duplicates to start digging, you’re going to need more than a little elbow grease to survive. You’ll need to gather materials, access food and water and, as the title suggests, oxygen.

In this guide, we’ll be looking at what you need to know before starting a new game to help you get to grips with Oxygen Not Included’s mechanics and keep your Duplicates alive.

Oxygen Not Included – tips for getting started 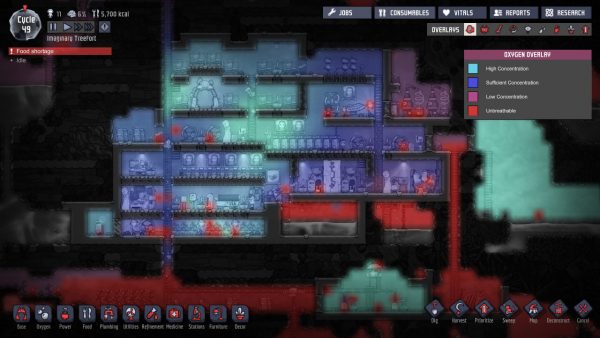 If your Duplicates run out of oxygen, they will hold their breath for a time before running to an oxygenated area. Areas on the map that are blue in colour have a better oxygen supply, so dig towards those if you can.

You’ll need to build the Oxygen Diffuser, which requires some power and Algae to work. Research the Manuel Generator and Tiny Battery, then connect them to your diffuser to get started. Eventually, you’ll be able to use the Electrolyzer to convert water into oxygen and hydrogen, which comes with its own risks.

There’s also the air deodoriser and scrubber, which remove contaminated oxygen and carbon dioxide respectively, though the latter will produce contaminated water. You can purify that using the water purifier later.

As an aside, carbon dioxide will travel downwards, so try and build sleeping and living quarters in the middle to upper sections of your base. You’ll also need to ensure that there’s enough air to grow crops, as well as making sure your crops are in the correct environment.

The research tree is your learning tool, though it’s not clear where you should start. Ideally, you should research food-based technology first as your Duplicates will starve to death before they suffocate. Look at farmings basics first to get Algae Terrariums which will help get rid of the carbon dioxide. You can get rid of them once your carbon dioxide levels have dropped low enough.

Next, look at power regulation to build more sustainable appliances, but be sure to build the generator and battery first. 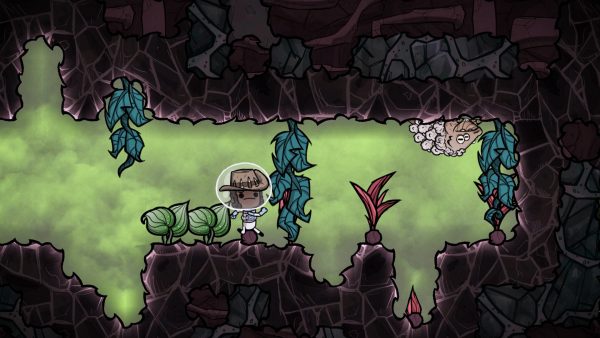 You’ll begin with 20,000 calories worth of food which won’t last very long between your hard workers. As you begin excavating, you’ll come across Bristle Berries, Muckroots and Meal Lice which will supplement their diet. Your next job is to build a Microbe Musher, then connect your Manuel Generator and Tiny Battery to it to produce your own food.

It would be a good idea to progress through the Food branch of the Research tree early on to get the Planter Box which will allow you to start growing plants and making delicious treats like Pickled Meal. Some plants will use up a lot of oxygen, so pick them carefully. Farm Tiles also take up less vertical space, so it’s worth considering learning about them, too.

It’s also important that you have a sink nearby for your Duplicates to wash their hands to avoid contamination.

When you discover water, be careful when digging out tiles as some minerals are stronger than others. If you dig too close to a sand tile they can collapse, potentially flooding your base, which will damage machinery and drown your Duplicates.

Collapsing sand tiles could also lead to your Duplicates falling down a hole and getting stuck, which is a problem in itself.

You’ll need to build a pitcher pump over the water source in order to bottle it, as well as a bottle emptier to move it or collect polluted water. You can filter polluted water with the water sieve and can eventually build a water purifier.

Basic sanitation and caring for Duplicates

Duplicates are your little colonists who will get stressed, go to the bathroom and eventually die, so plan ahead to meet every basic human need. One of the first things you should do is build an outhouse, as you don’t want any polluted water due to bad sanitation.

If a Duplicate were to somehow die, remember to bury them unless you want Morb creatures sucking up all your precious oxygen. Later in the game, they’ll be more useful, but for now, you want to avoid them if you can.

Coincidentally, they don’t like being covered in shit, so you’re more likely to get a sick or angry Duplicate if you don’t build any toilets. Should your Duplicates run through polluted poop water, you can easily mop it up but you must clean them off in clean water or else they’ll contaminate a larger area.

If your Duplicate gets stressed they will throw up or go on a destructive rampage on the most vital equipment, so try not to crunch them too hard. Vomit can also contaminate water and damage equipment, which can end your colony quickly, so keep on top of any stress by making sure there are plenty of beds, too.

As we said earlier, certain plants need to be grown in specific environments, with the temperature being one of the key factors. The Temperature Overlay will help you see the different temperatures in each biome which will help you plan ahead.

Depending on the temperature, different gasses and germs will be present which can infect your Duplicates or lead to an explosion. You can use airlocks and insulated tile to keep these dangers at bay, as well as natural protection from Abyssalite veins.

A word of caution: don’t try to break through these veins until later in the game – you don’t want to be obliterated by being woefully unprepared. 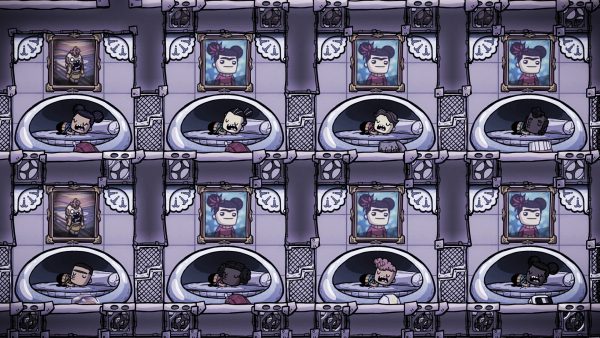 Don’t expand your base too fast or accept too many new colonists at once; it’s better to build slowly and maintain some equilibrium in Oxygen Not Included. If you’re building with lots of wires, try and build them into the walls and floors, as this will increase the decor rating.

Make sure you have enough outhouses, beds and decor for your minions, as well as storage bins. You can eventually make a room to store your bins in which will make your Duplicates a little happier. Another way to get rid of infectious materials is to store them underwater, as lack of air will kill off any germs. Select each bin and choose what material will be stored there to make it easier. 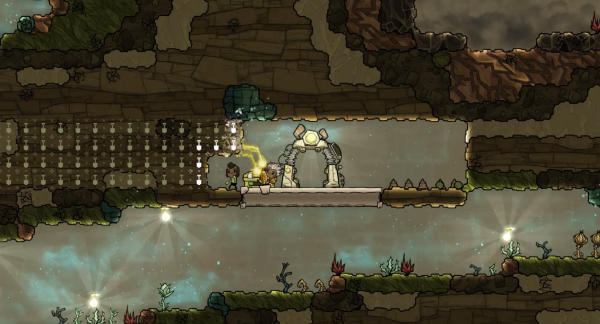 Keep an eye out for materials like copper and iron ore, algae, sand and slime which you can use at the beginning. It’s equally important to try and choose Duplicates with good skills, like high digging and construction skills. You’ll also need a scientist, preferably with a high learning statistic and medicine.

Good Duplicate qualities are Diver’s Lungs, Naturally Robust and Iron Gut, as they give your Duplicate all-round better resilience. Or, if you like a challenge, pick some who need double the amount of oxygen to breathe or who can become sick quickly.

Each map is randomly generated so you might it hit lucky and have everything you need close at hand. Other times, you won’t be so lucky and will lose some Duplicates along the way.