You can get Slay the Spire and Squad for just $12 as they’ve been announced as the two headline games in the September Humble Monthly bundle.

You’ll get immediate access to the pair of games so you can start your card-based climb up the monster-stuffed tower in Mega Crit’s roguelike deckbuilder or execute battle plans with military precision in Squad. As for the other games to come in the bundle? You’ll have to wait until 6th September when they unlock to see what surprises await.

Going by those two games alone, though, it’s already looking like a great offering in terms of quality and value. Slay the Spire has devoured many hours of my gaming time with its engrossing mix of deck-building and randomly-generated dungeon crawling. As for Squad, it’s still in Early Access but looks like an accomplished military sim without being quite so intimidating as some of the genre’s mainstays.

Buy both games right now elsewhere and you’re looking at spending close to $65 at full price. So, $12 in the September Monthly bundle for the pair, plus whatever wonders await at the start of next month? Sounds good to me! 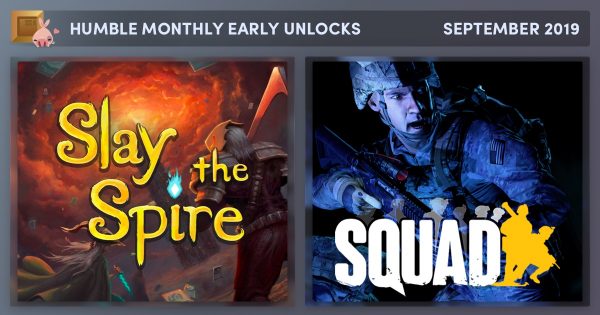 As the new bundle begins, so the old one is fully revealed. If you picked up the August Monthly bundle you’ll now find you have Rising Storm 2: Vietnam + DLC, Yoku’s Island Express, The Adventure Pals, Almost There: The Platformer, Swords and Soldiers 2 Shawarmageddon, and a new Humble Original, Don’t Give Up, added to your library. That’s alongside Kingdom Come: Deliverance and Surviving Mars that were last month’s early unlock titles. You should be especially happy with the wondrous pinball platformer Yoku’s Island Express.

Humble Monthly is a subscription service but you are able to cancel at any time while also keeping every game you’ve previously purchased. That means you can sign up for the September Humble Monthly bundle for $12 to get your hands on Slay the Spire or Squad and then cancel right away. You can get a month free if you decide to commit to a yearly subscription, though.

Also, Humble Monthly subscribers get a number of other benefits including up to 20% off at the Humble Store and access to the Humble Trove – a rolling library of games you can download for free. So that’s nice!

Still craving more savings? You can find even more offers at Jelly Deals where we’ve rounded up the best power bank for Nintendo Switch right now, many of the cheapest PS Plus deals and everything you need to know ahead of placing a Nintendo Switch Lite pre-order!