It’s official – mechs are coming to Fortnite in Season X.

After the Doggus vs Cattus fight towards the end of Season 9, there was some speculation over whether we’d see giant robots again in Fortnite. 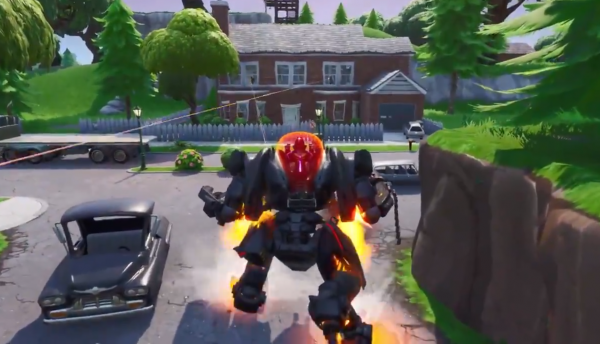 In the latest trailer, we got our first glimpse of the new Brute Mech. It’s a two-player vehicle that will let you unleash hell on other players as you stomp around the map.

You can use the Brute’s jets to jump a great distance, smash your way through buildings and fire projectiles at your enemies, adding a whole new level of robofun to Battle Royale matches.

The official patch notes shed a bit more light on what you can do with the Brute. It has a shotgun with a clip size of 10 that deals 50 damage per shot with a 1.5x headshot multiplier, and a missile launcher that fires up to 10 missiles at once.

As well as those offensive options, the Brute has an overshield that uses up 200 wood, brick, or metal to make a shield that protects your mech for 5 seconds.

The Driver of the mech will be able to move it around, while the passenger has access to the weapons.

Downtime is expected for a few hours this morning before you can jump into Season X, so check back soon for more information on where to find and how to use the Brute in-game. You can also check out the Season X opening trailer here.

An all-new Battle Pass is available for Season X and you can check out all the new Dimensions for your favourite skins.