The cover art we ended up with in Borderlands 3 was, unsurprisingly, not the developer’s only design.

At Comic-Con over the weekend, Borderlands 3 developer Gearbox hosted a pop-up display of various in-game props called Museum of Mayhem. The exhibit featured, among other things, all rejected designs for the game’s cover art.

13 of these were on display, and they run the gamut from predictable to completely out there – even by Borderlands standards. This art collection also helps answer the question many of us had about exactly how Gearbox would try to convey the number three on the cover.

The first two Borderlands games featured a Psycho holding up one (and later two fingers) in the form of a gun. You can clearly see Gearbox attempted to recreate that in amusing new ways for Borderlands 3, such as having a foot on the cover, or have the Psycho hold up a three-finger gun.

But those are only the least interesting, the more out-there stuff features some truly strange imagery like the one showing breastfeeding, or one where the Psycho is swinging on a wrecking ball through space.

Once you filter away all that, you’re left with some really good covers that could all have worked pretty well. Instead, we got that relatively tame design (by comparison).

See all of them in the shot below via Reddit user Frocharocha. 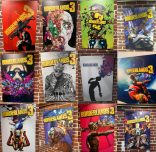