You think that Ubisoft would’ve played it safe with the final instalment of the Fate of Atlantis DLC, but they’ve introduced yet another mechanic to the mix: Adamant Weapons. Crafted from Adamant Ingots hidden around the city of Atlantis, these powerful, customisable Legendary weapons are great for capping off your time with Assassin’s Creed Odyssey – here’s how to craft them all.

First off, some basic information. There are three kinds of Adamant Weapons that you can craft: a dagger, a spear, and a club.

You can only craft one of each, and all of them cost three Adamant Ingots to produce. 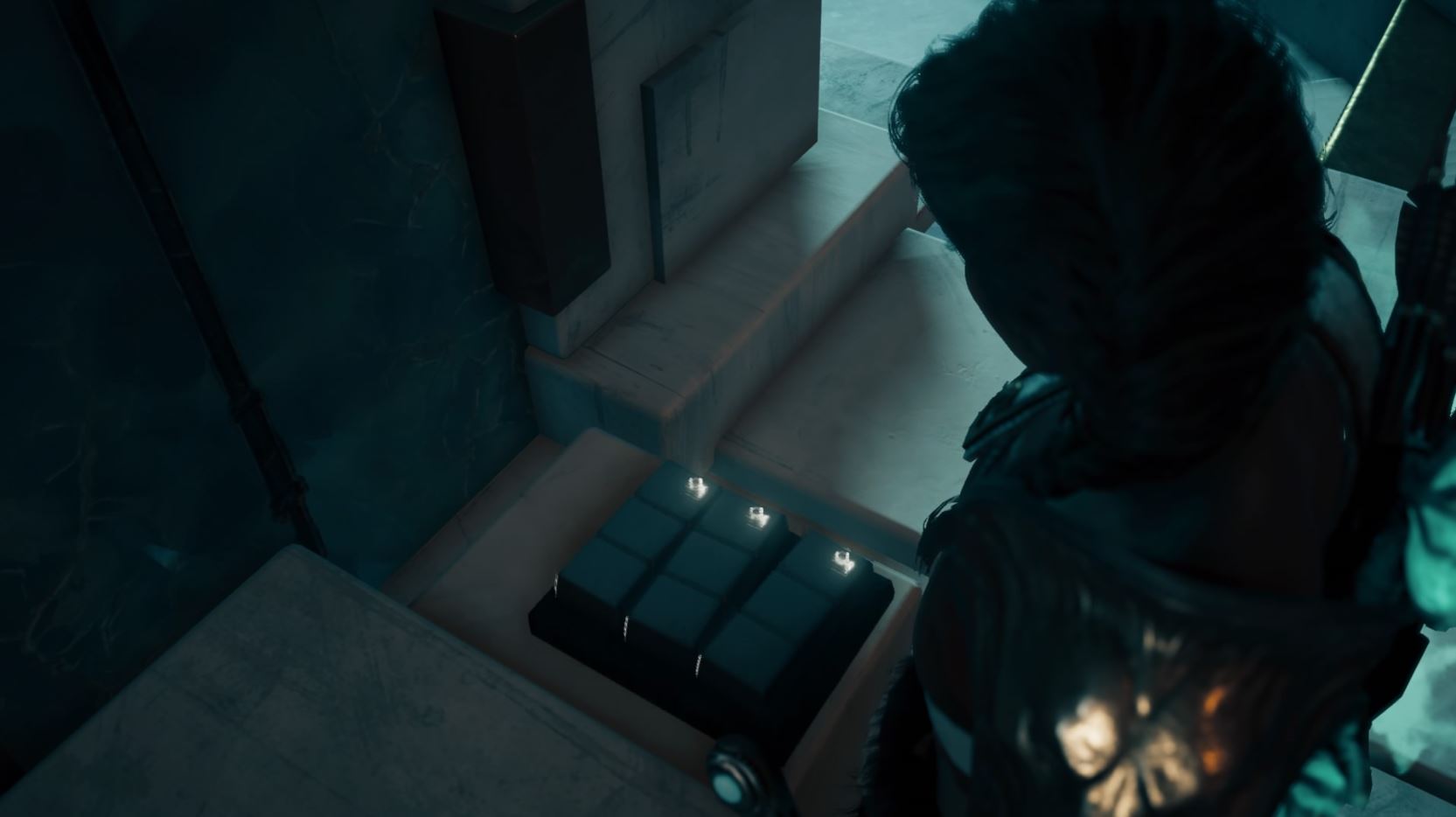 When you commit to crafting an Adamant Weapon, you can choose it’s bonuses based on your playstyle. By choosing either Assassin, Warrior, or Hunter, you can decide which of those types of damage the weapon will boost.

The weapons also come with their own unique suite of Legendary Engravings that do things like make part of your Assassin, Warrior, or Hunter stat bonuses increase all damage. When you craft one of the weapons, you unlock all three variations of its Legendary engraving. 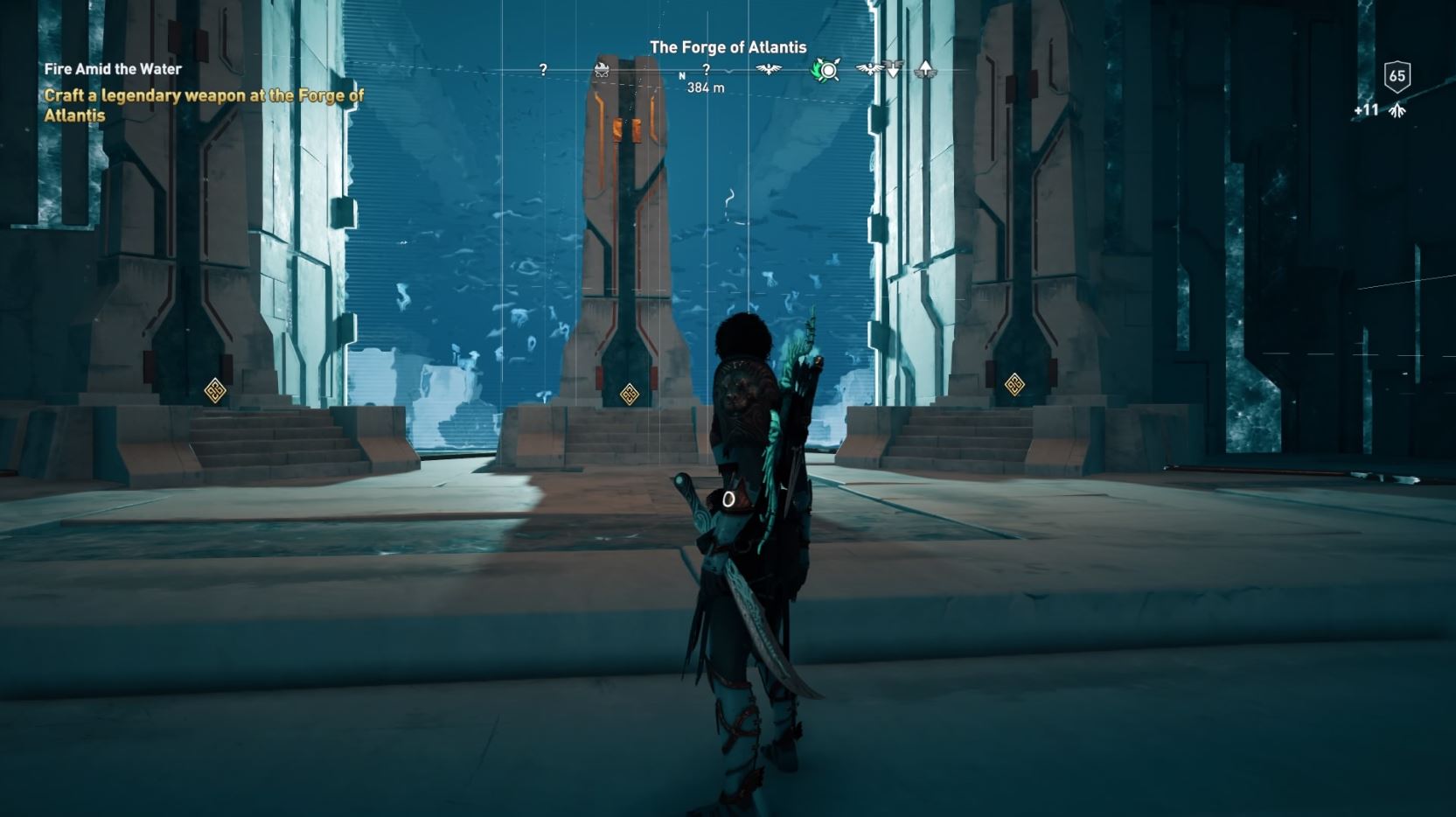 Not only do they look pretty damn cool, but the Adamant Weapons are also quite viable as end-game weapons. You can add your own favourite engravings at the nearby Blacksmith to make them even better.

Where to find Adamant Ingots

As we mentioned before, each Adamant Weapon requires three Adamant Ingots. The easiest place to procure your first three is at the Keeper’s Insights locations in Atlantis.

If you’re trying to craft these early, you might want to visit the Insights in reverse order, since the Insight of War – which is listed first in the quest diary – requires you to reach Isu Knowledge sequence 1. We have a guide on where to find them all here.

Or if you’re short on Knowledge, here’s where to find caches and codexes.

Briefly, to get to all of them imagine Atlantis is a wheel, and the castle is the centre of the wheel. There are waterways that go through the city’s outer rings like spokes of a wheel. Follow the waterways that come out from the castle in the directions you need to go – north, southeast, and southwest – and you’ll find the Insights at the end of them.

Once inside the Insight chambers, the Adamant Ingots can be found in chests on the second floor in the main halls, above the doors where you come in. 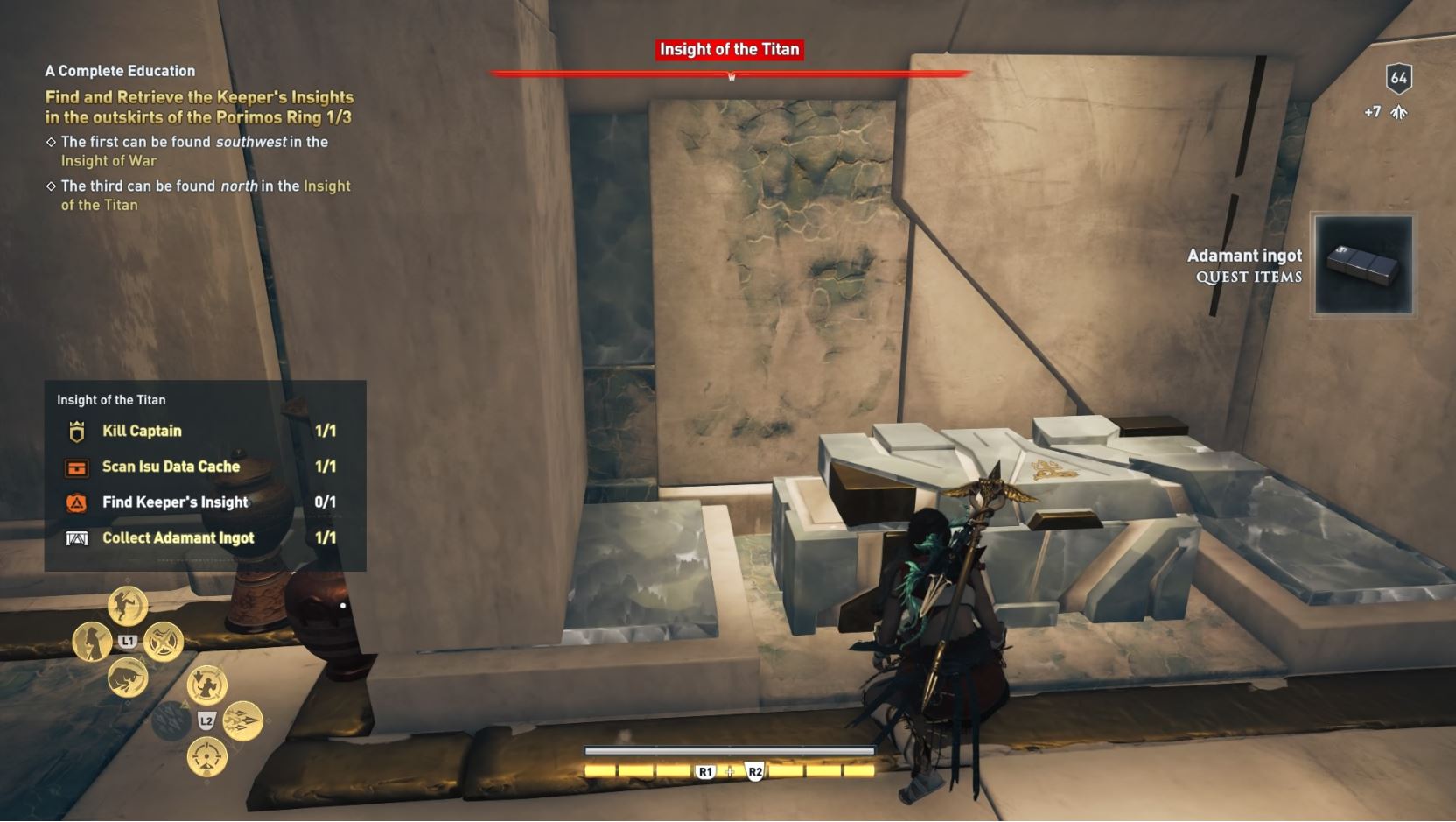 Alternatively, you can get more Adamant Ingots from the various locations in the inner ring of Atlantis. Each of these indoor, underground locations contain an Ingot – they’re usually found underneath when you come in, or around a corner, guarded by an isu warrior inside of a chest. Before you enter the dungeon, scan with Ikaros over the area, because you can’t use him inside.

If you need a new set of armour to go with your weapons, we also have a guide on where to find the Dikastes armour.

Scavenging these areas on the inner ring of Atlantis will quickly give you the Adamant you need: 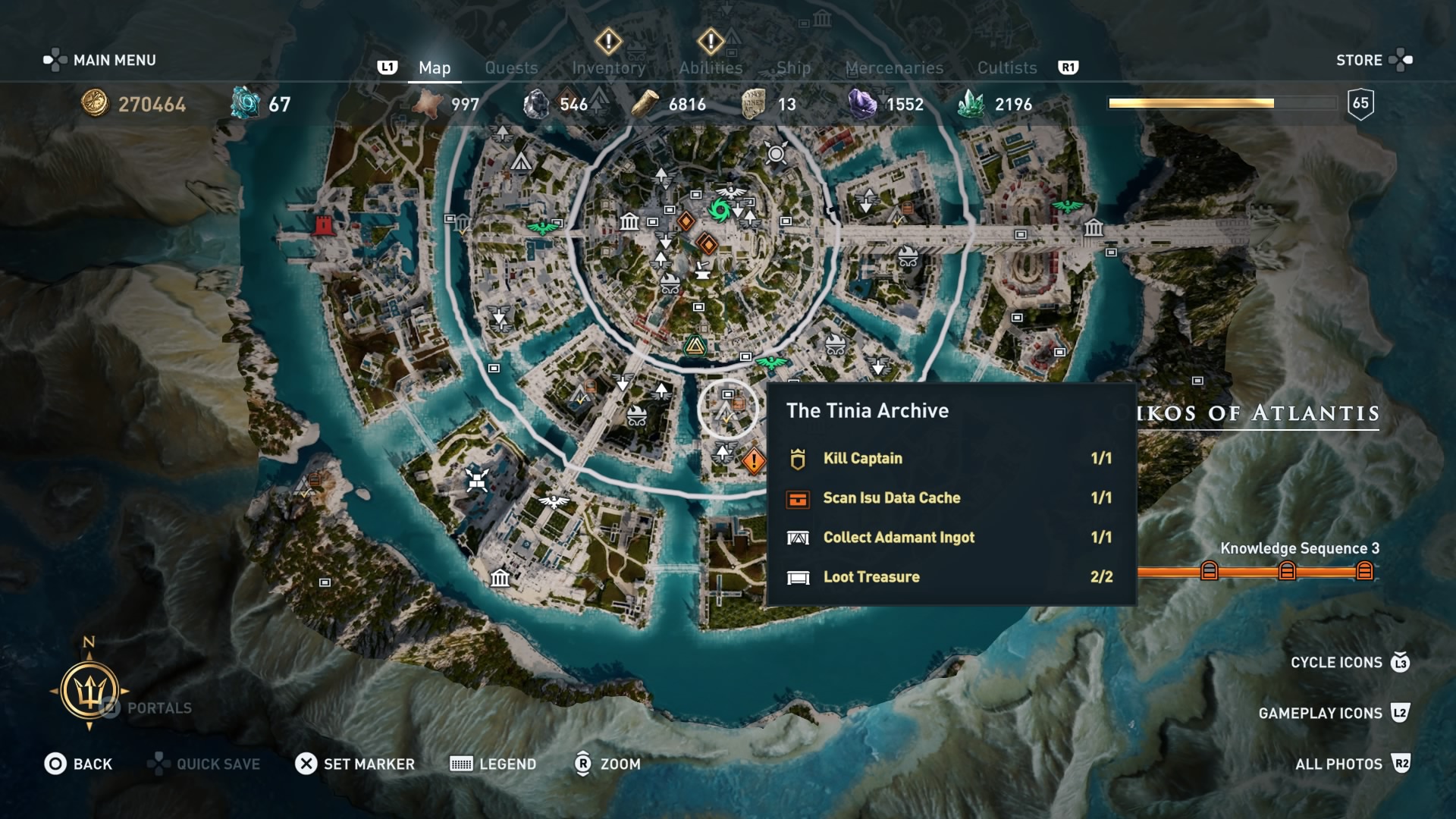 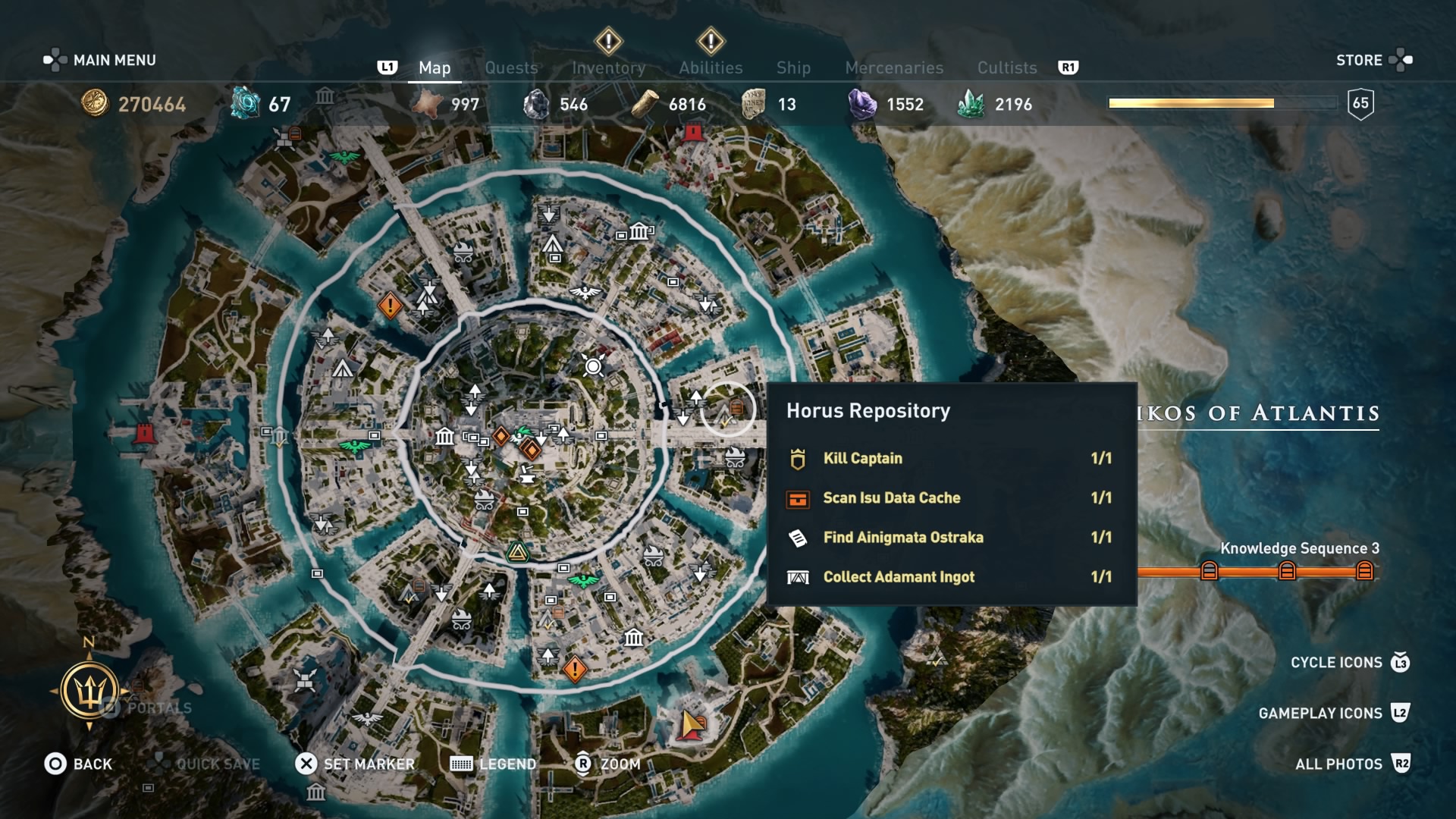 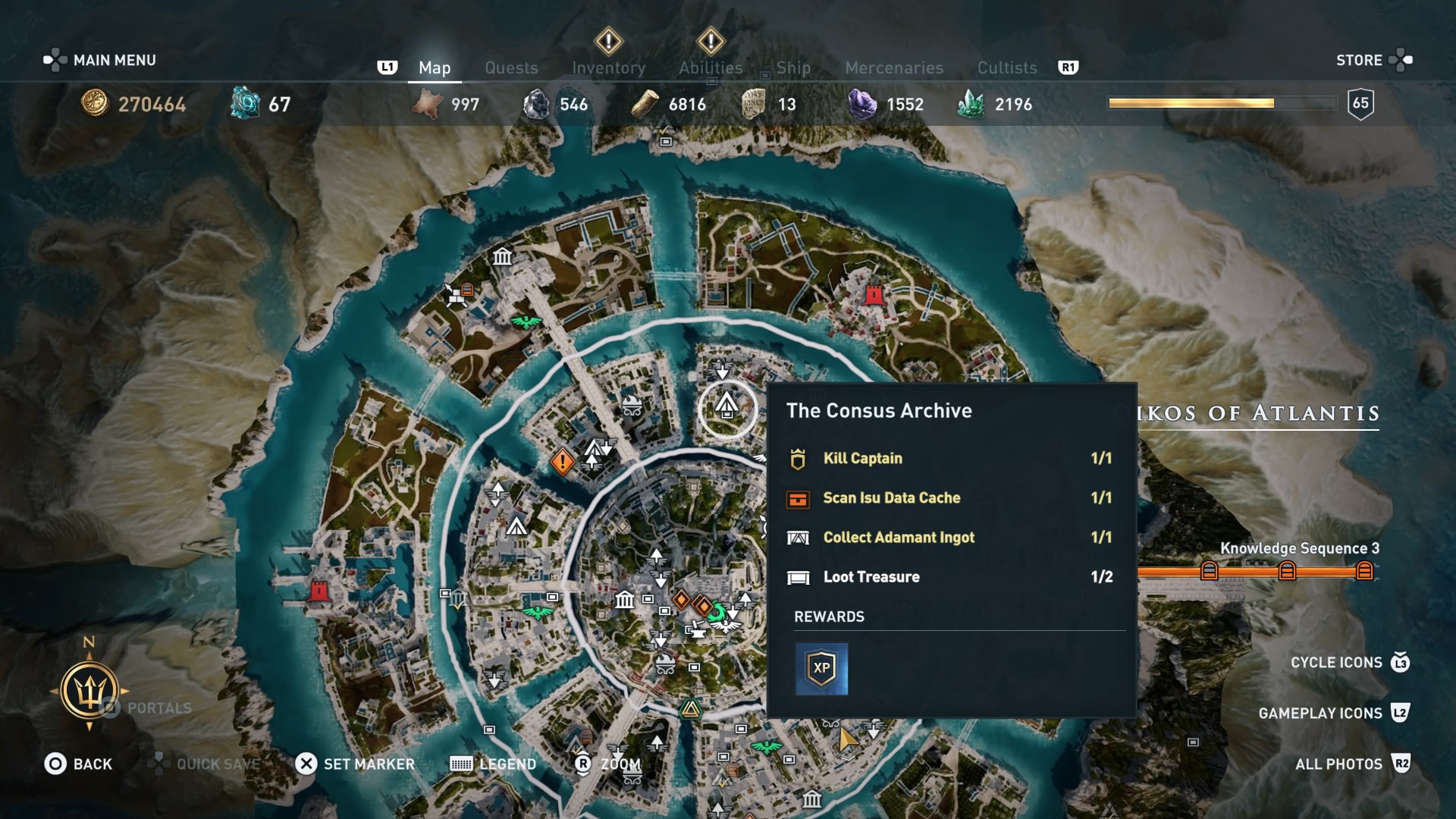 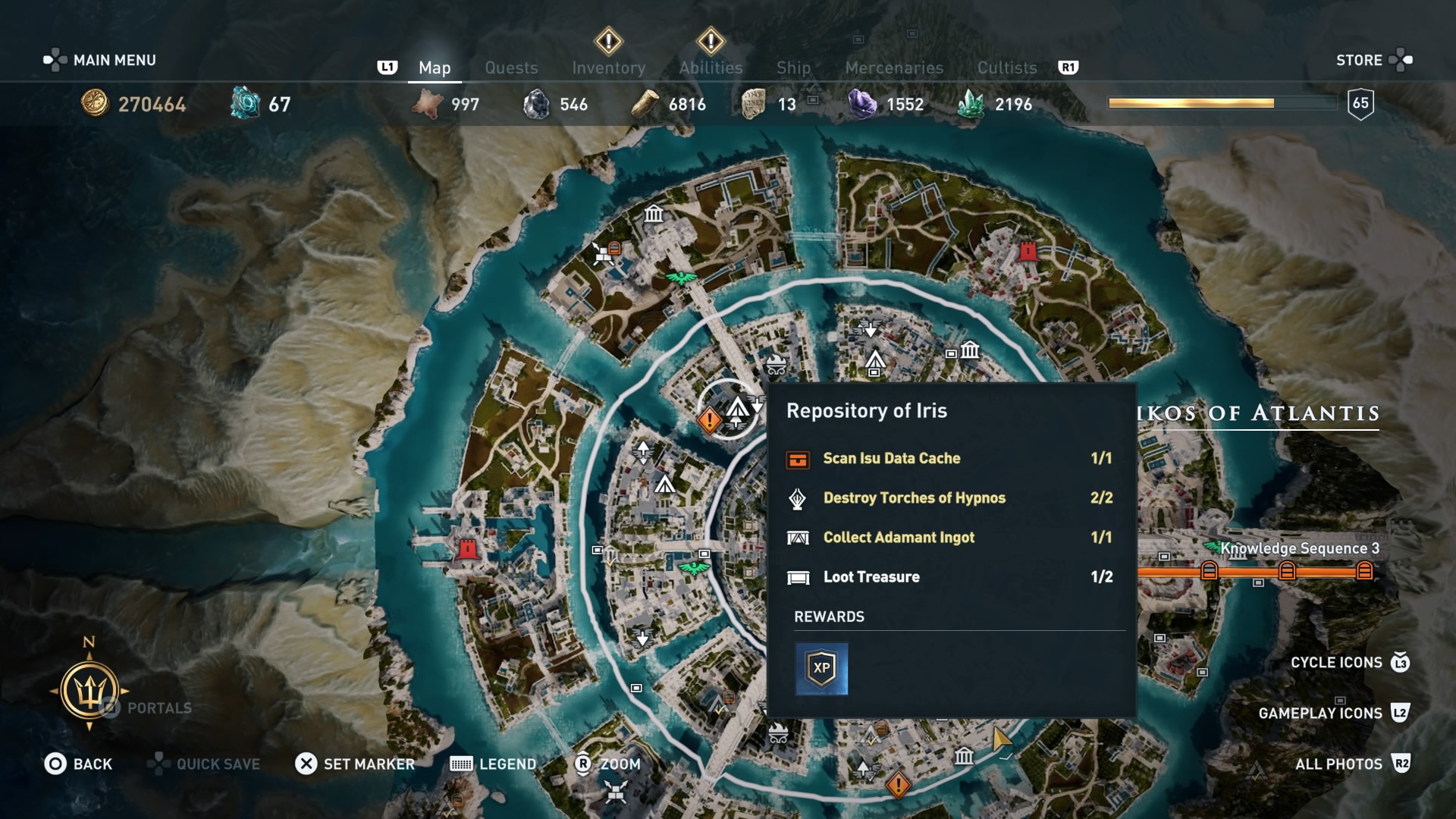 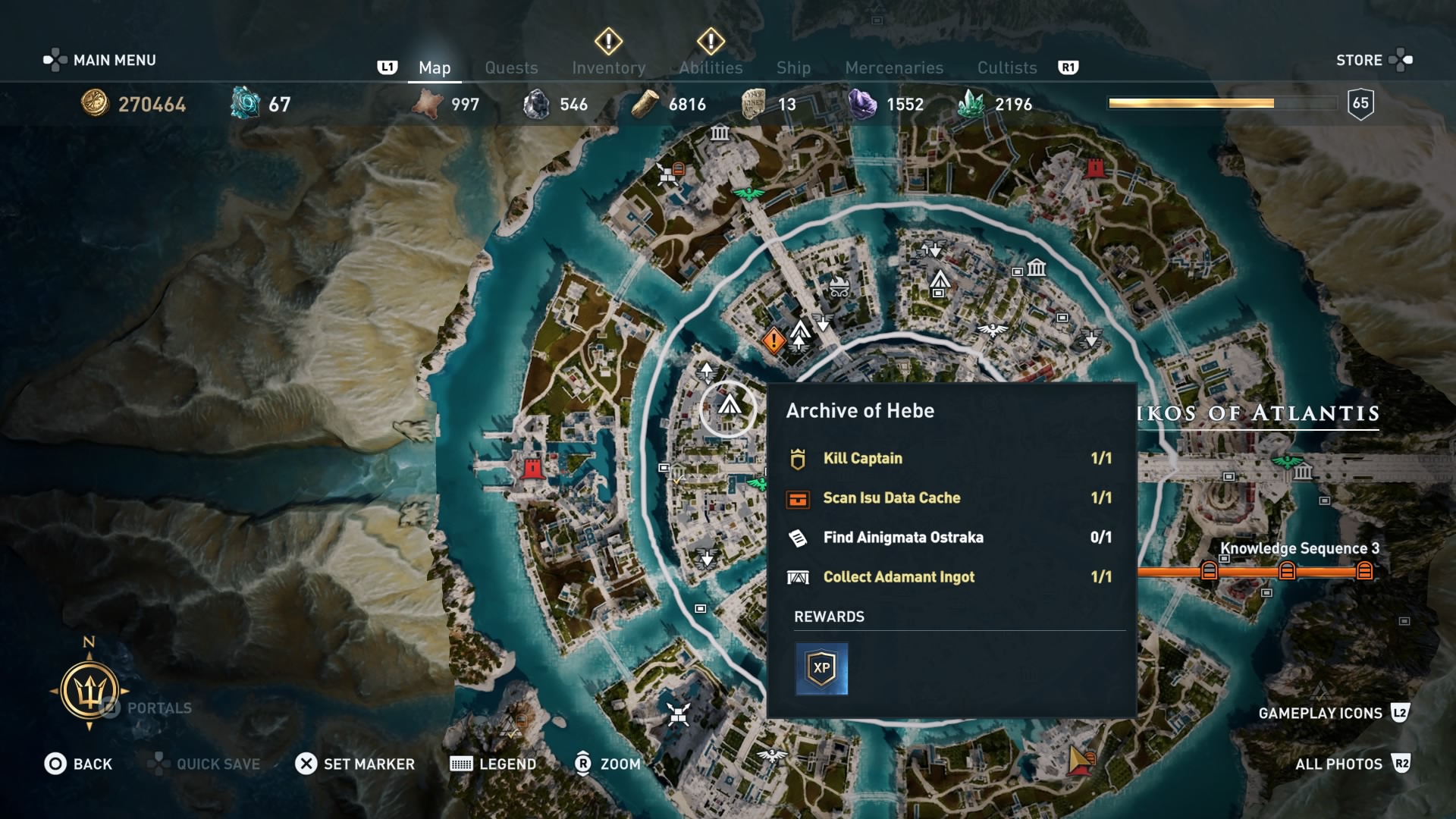 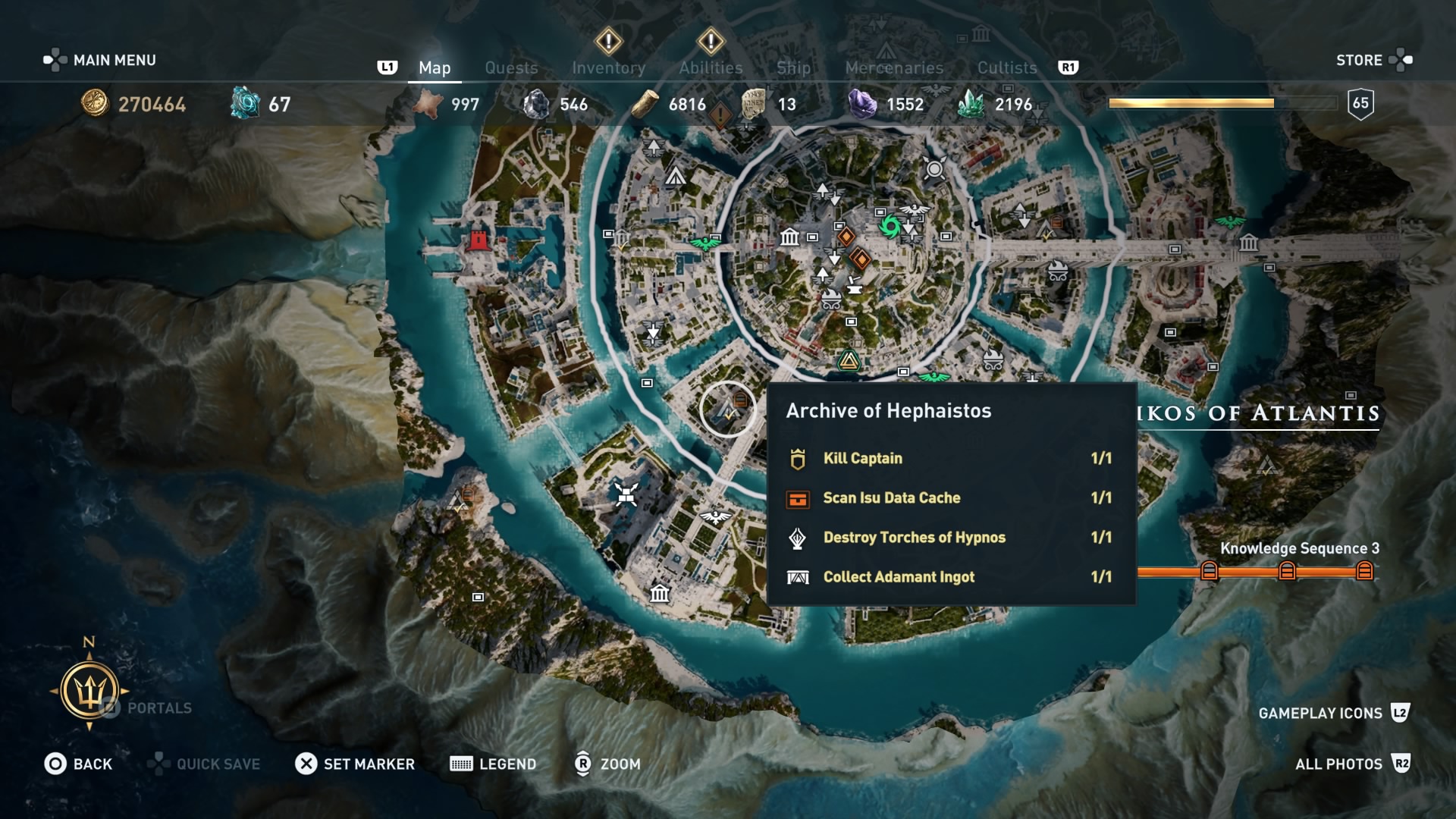 To create the weapons, you need to travel to the Forge of Atlantis. This is found just to the south of the main castle, right at the bottom level next to sea-level. 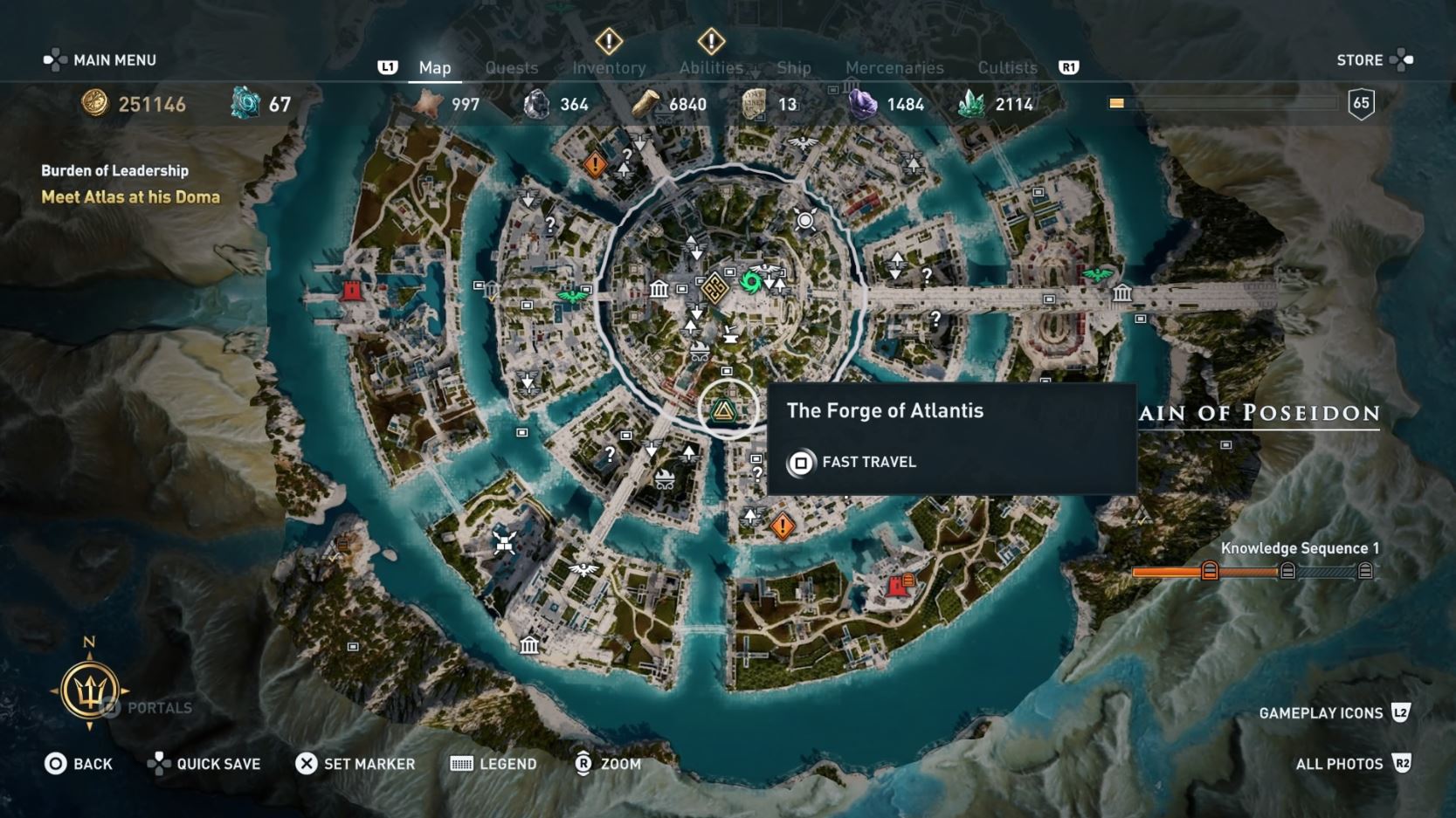 Once you’ve visited the Forge, you’ll be able to fast travel back there.

If you’re having trouble maxing out your Isu Knowledge bar, we have a separate page on where to find Caches and Codexes.