Sea of Thieves has changed a great deal since its lackluster launch in February last year. Throughout 2018 – and since I last played it, in March of that year – it received monthly updates. The developer introduced more customisation options, balance changes, new challenges, fresh enemies to deal with at sea, timed challenges, ‘cursed’ objects, rowboats, an expanded map, and dozens of other tweaks and changes.

Then, earlier this year, Sea of Thieves officially rebranded itself as Sea of Thieves: Anniversary Edition, complete with a new title screen and a bunch of new additions. Some are minor – you can carry around a chest and use it to store several small spoils from your adventures at once – but most of the changes made are massive.

The ‘Tall Tales’ offer up something akin to a campaign mode in the middle of Sea of Thieves, giving players, potentially, a stronger sense of focus with its lengthy missions. It added harpoons, a fishing mechanic, new trading companies, new skeleton enemies and a whole new focused PVP mode on the main menu, Arena. At this point, Sea of Thieves is a much bigger, more substantial game than it was at launch.

So it’s funny to come back and realise that it is, in so many ways, still fundamentally the same game that I enjoyed for a while in February and then quickly lost interest in.

I’ve spent the last week trying to get back into Sea of Thieves, to see how much these additions and expansions have improved the experience. It’s bigger and better now, yes, but I still spent my first night aimlessly fumbling, trying to work out how everything worked, soon realising that playing solo was a terrible mistake. Sea of Thieves doesn’t just not hold your hand: it chops your hand clean off and replaces it with a rusty hook before throwing you into the proverbial deep end (and the literal deep end if a hostile ship comes along and sinks you).

For the rest of my time with Sea of Thieves over the last week, I teamed up with a friend and his crew. They play together a few times a week and have been for months now. I went along with them, calling myself an observer with a sword (and an occasional participant, although I left it up to them to interpret maps and navigate – they’re the experts).

What I learned by doing this is that while the dynamics of the game have shifted a bit, the real shift has come in the sense of purpose the game’s existing players, who have now settled into routine, seem to feel. Sea of Thieves doesn’t feel like a game about building up to something unless you dedicate yourself to the Tall Tales campaign. It’s a social space where half the appeal is navigating the choppy waters, playing instruments together, telling tales of Kraken attacks, worrying about an enemy ship robbing you of the treasure chests that you don’t really need, per se, but which you’re adamant about safely depositing.

It still doesn’t feel like there’s anything too exciting to do with the spoils of your victories, and the game still felt repetitive even across just a few sessions. But the game’s seemingly huge playerbase has clearly made peace with this, and is enjoying it for what it is – a game that simulates the experience of being a weird cartoon pirate well.

My friend and his crew told me about the changes they had witnessed. There are more complicated cargo missions now, they said, filling the bottom level of their boat up with water to transport plants that need to be kept wet to avoid withering. Alliances can now be forged while fighting Skull Forts, they tell me (the Skull Fort event we were running through was very dull, I thought – the skeletons you fight in PvE are still unexciting, even if there are some new varieties of boney boys). The increased frequency of events, and the addition of Arena mode, have made the base game a bit less cutthroat, they say.

Still, as we find ourselves at the end of a mission, carting a huge amount of treasure back to an outpost, scanning the horizon with our telescopes and watching out for monsters, I find myself reflecting on the fact that my favourite part of Sea of Thieves remains unchanged. It’s not the way you can pull your friends out of the water with your harpoon, or the fishing economy, or anything the game has added. It’s that sense of fear you get when you’re about to cash in. That anxiety that the game, or another crew, will take everything from you. 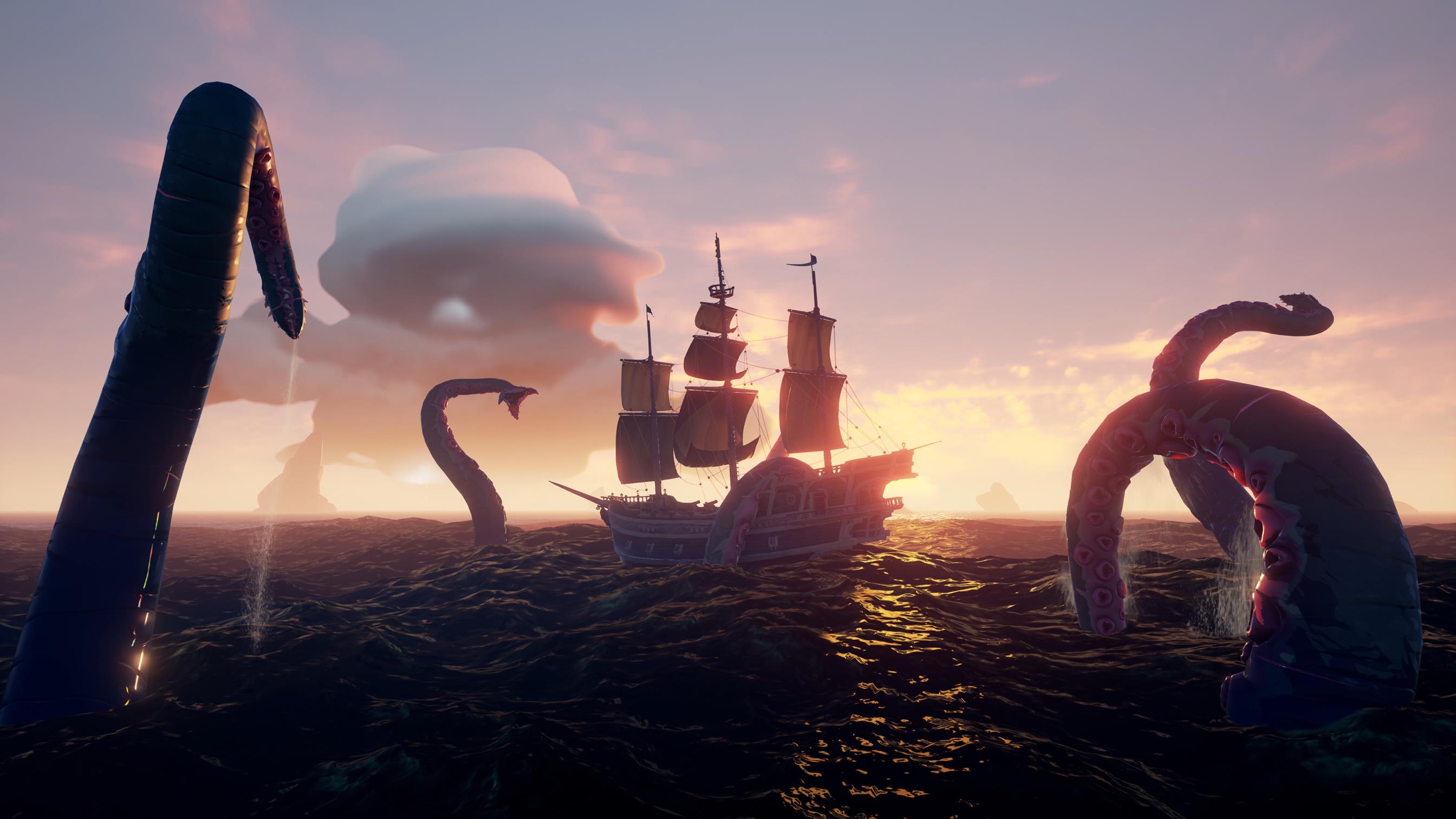 There are more activities that can lead up to that sail back to an outpost now, but a lot of them are still tedious – I don’t think I’m ever going to enjoy searching an island, map in hand, for buried chests.

To really get the most out of Sea of Thieves, you’re going to have to team up either with a few friends who are just as dedicated to learning the game inside out as you are, or you’re going to have to find an accommodating existing crew that will be happy to have you tag along while you learn the rather extensive ropes. The game still isn’t friendly to newcomers, and if you’re not with experts expect to spend a lot of time on Google while playing.

The Anniversary update also added a new Arena mode, an option on the top menu that pits four teams of four against each other to gather and sell buried treasure in a competitive environment while robbing and attacking each other. It takes the core Sea of Thieves experience and makes it faster and more aggressive.

You’re given a 24-minute time limit to bank as much silver as you can, while stopping your enemies from doing the same, with a winning team declared at the end of it. It’s not my kind of thing, but it’s a good outlet for players who want to flex their teamwork in a competitive environment. 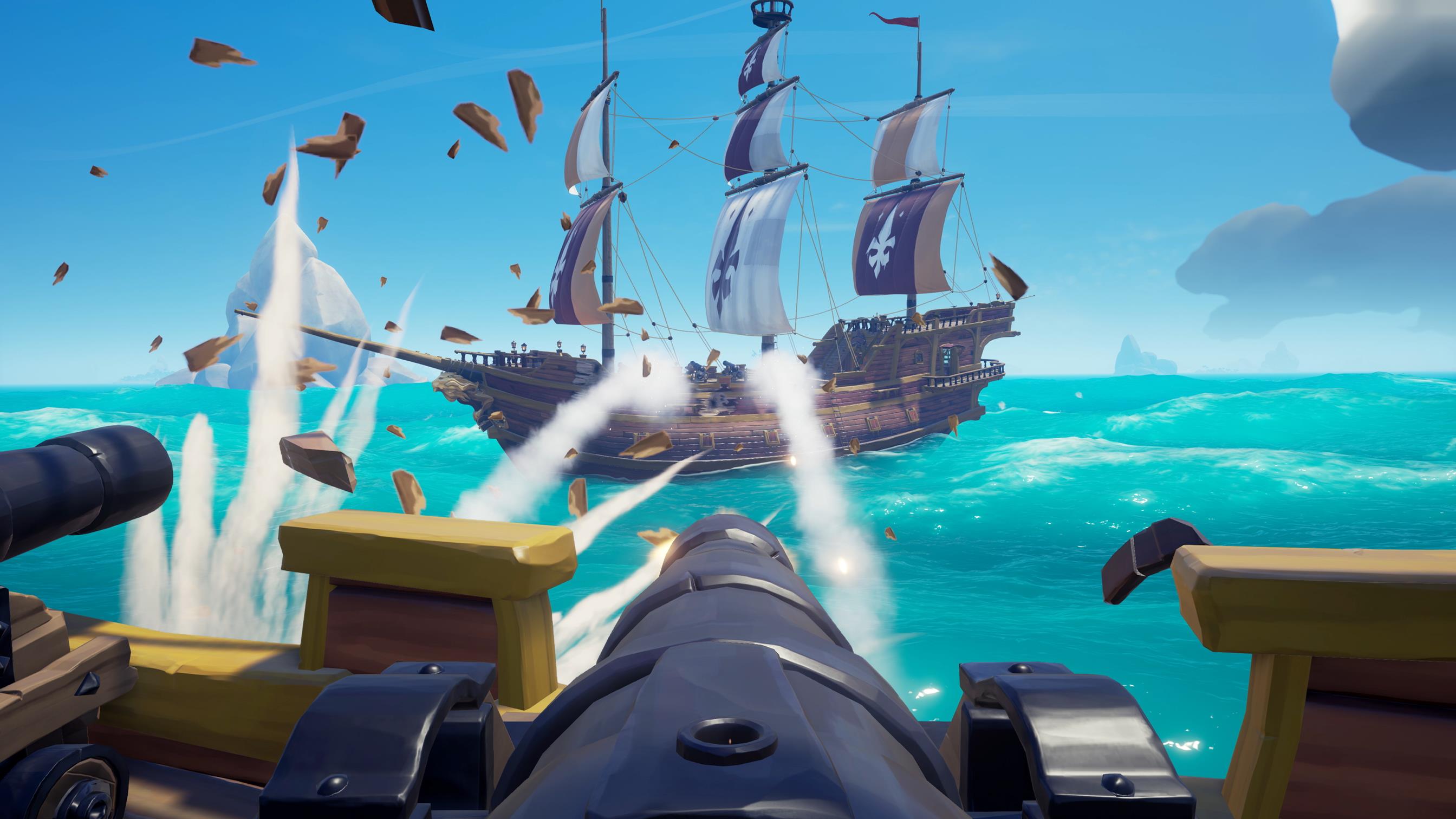 I have one very fond memory of playing Sea of Thieves back at the beginning of last year. At the end of a session, as I and my crew (all of whom subsequently dropped the game soon after) sailed back to an outpost with our gold, we became aware of a ship that was following us. It wasn’t far behind, and we realised that once we reached the outpost we’d have a fight on our hands if we didn’t deal with them at sea.

One crewmate had an idea – before the outpost we would simultaneously drop the anchor and spin the wheel all the way hard, causing us to come to a stop with our port side cannons (the left – he was a boat nerd) pointed right at the oncoming ship. If we timed it just right, it would be unprepared to retaliate when we bombarded it with cannonballs. The plan worked, and we did massive damage to their ship. It tried to ram us, and one of them managed to jump off onto our boat where we promptly cut him down as his boat sank.

Nothing quite so magnificent has happened since I came back, but the appeal of Sea of Thieves was – and still is – that feeling that something like this might happen. One session with my friend’s crew ended with us storming a ship at an outpost, killing the other crew and stealing their treasure. I felt bad for a moment, but then I had my pirate drink a tankard of grog in front of them in what I hoped would seem like a gesture of good will. One of the other pirates called us ‘fuckheads’ and I earned an achievement for, allegedly, sharing a drink with another crew.

Sea of Thieves has expanded enough to earn a new subtitle after its name, but in many ways, it’s still the same bawdy, messy, obtuse, but also kind-of-brilliant game I fell out with last year. If you can make peace with its imperfections – as many players evidently have – it’s in a pretty good place right now.