The Starlink: Battle for Atlas Starter Packs on all formats have been reduced to clear at Amazon and Argos.

If you take a trip over there right now you can find Ubisoft’s toys-to-life space adventure on PS4, Xbox One and Nintendo Switch for just £12.

Of all of them, that’s a particularly good price on the Switch release as that’s the version that includes the exclusive Fox McCloud pilot figure and Arwing ship model. The rest of Team Star Fox also join him in the game as part of a series of add-on missions that only feature in the Switch version. 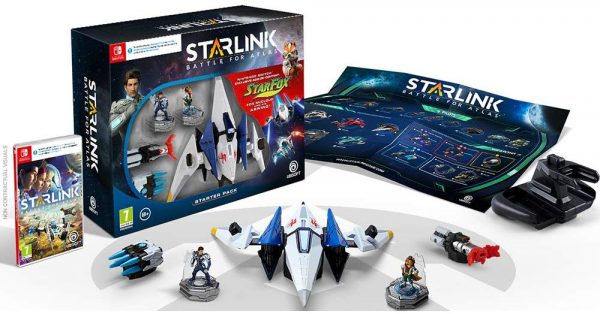 Sadly, it hasn’t been that easy of a journey for Starlink: Battle for Atlas. Sales apparently fell below expectations according to Ubisoft, something that probably wasn’t helped as it launched at a time when the toys-to-life craze appeared to be calming.

Ubisoft is continuing to support the game with more digital extras. The chance of any more physical goodies, though, has been ruled out entirely.

By searching for other Starlink tat at Argos, you can find all sorts of other ships and pilots in a clearance sale too!

For many more gaming offers do head on over to Jelly Deals. There are a great many gaming, tech and gadgetry bargains – including a guide to the best Nintendo Switch SD cards and best power bank for Nintendo Switch.