The modern Mortal Kombat trilogy of the ninth, tenth and eleventh numbered entries in the series are a triumph in many ways – but best of all is how it treats its aging cast of beloved characters.

According to official Street Fighter lore, Chun-Li was born on March 1st 1968. This date was established in Street Fighter 2, the birthday of the strongest woman in the world listed alongside other relatively frivolous stats in-game. These sorts of snippets of data were pretty commonplace back in the nineties, with games and their manuals cramming in extra bits of information to add colour to their characters and world. Did you know Knuckles the Echidna’s favorite food is grapes? I did, having read the Sonic the Hedgehog 3 instruction manual religiously as a child. Did you know that Cloud Strife has two birthdays – one from the original game and one featured in more recent FF7 media – because the team apparently couldn’t settle on a date? You do now.

This stuff is cute, obviously, but I can’t help but feel like the team behind Street Fighter and many other video games are missing a trick. Based on that initial dating Chun-Li should be in her fifties now, but in the world of Street Fighter she’s been frozen in time. The world always moves forwards: in story modes we see new inventions like touchscreens, mobile phones and modern-looking backdrops, each game contemporary to its release period, but the characters stay as they are.

“I’m the strongest woman in the world.”

This makes sense, of course. Chun’s hair buns and blue dress are iconic. So too is Ryu’s gi and red headband. Keeping these elements steadfast over the last almost-thirty years makes a lot of sense – but the team behind Mortal Kombat deserve to be credited for breaking the mold and doing the unthinkable – letting their most iconic fighting game superstars age.

This is something we don’t see games do in general very often at all, but the last two Mortal Kombat releases have made it a key pillar of their world. Just what happens to a Hollywood action superstar like Johnny Cage when he’s no longer a cocky twenty-something? Which of the cast of the original MK Trilogy would have children, and what would they be like? These games offer up answers to these questions, and they’re surprisingly satisfying. Games as a medium have an increasing amount to say and showcase about a variety of things – but I’ve seen few happy to take young casts and have them age as much as the series they’re from.

In Mortal Kombat 11 these changes are played up for maximum impact. Some characters have simply aged, while others have suffered irreversible changes thanks to the ebb and flow of MK’s brutal storylines. Some are dead, resurrected by evil forces as pale-skinned zombies. Some are less cavalier, worried about their kids. Some of those kids embody the best of their parents, a weird crossover of characters you loved in the nineties. It’s just inherently interesting. Much of this was also present in the previous game, but the eleventh entry appears to be far more confident with both its returning superstars and their new offspring, playfully dubbed the ‘Kombat Kids’ by fans. 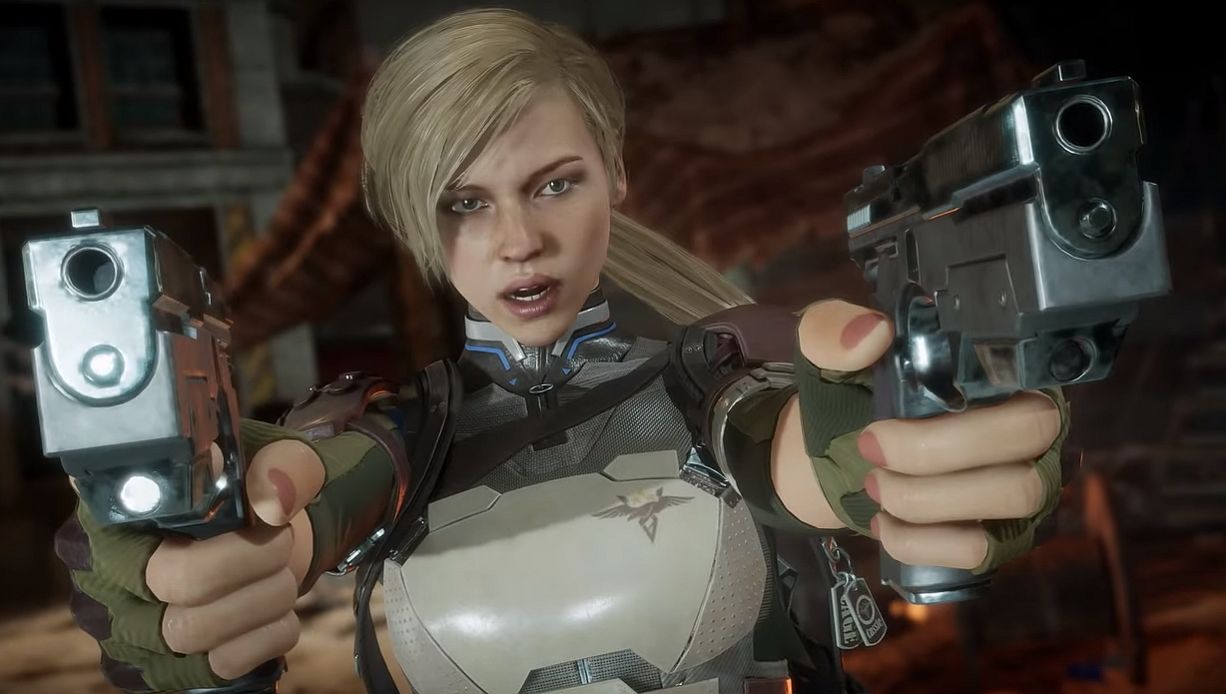 Cassie Cage is pure millennial – but love that or hate that, it fits with and stands in contrast perfectly to her also-playable parents.

As is fighting game tradition, each character has a range of costumes and skins (which admittedly are hidden behind a horrific grind, though that’s a criticism for another time) – and through this, classic versions of each character remain present. If you want to play as nineties Sonya Blade, exposed midriff and all, you can. These skins are used to great effect in the winding, convoluted time travel narrative, too – so old and new versions of characters meet and trade blows, the young are rescued by their older selves, or children are forced to fight the youthful forms of their parents, who know not their identity. It’s cool stuff.

That’s what all of this is, to be honest – it’s cool. It’s not groundbreaking or anything; Mortal Kombat is too campy and silly to have anything real to say about ageing, though there’s thematic hints at more here and there. What it does do is offer new and intriguing takes on characters – characters who, over the course of nearly thirty years, have grown. In many cases that growth is within the strict confines of their existing caricature, something the nuance-free MK series structure really demands – but it still feels surprisingly honest.

There’s also a real feeling of progress and consequence. For some characters that means an appearance as an undead, vengeful husk after a brutal demise in a previous game. For others, it’s a feeling of the inevitable passing of the torch – that eventually, as MK grows and changes, Sonya and Johnny may very well be replaced by their daughter Cassie, and Jax with Jacqui. Either way, it gives everything in that narrative a little more weight despite the fact it’s filled with time travelling retcons and resurrections.

This isn’t just about age, either. There’s perspectives in modern MK that could never have been expressed in previous games thanks to the range of voices on the cast. This has in turn allowed the series to offer more in tone, and it of course makes one wonder about other games. What would a Zelda world look like from the perspective of a Link that isn’t a kid or plucky teen, but a grizzled knight? A world where Zelda is an experienced Queen rather than unsure Princess?

When games with well-established worlds and characters toy with ideas like this, the result is almost always interesting at the very least. The best thing about Metal Gear Solid 4 is its aged, ruined Snake. The same is true of the rugged, older Marcus in later Gears of War games. It’d also be remiss to not mention the third pillar of the 90s fighter trifecta, Tekken – which sort of sits between MK and SF in how it embraces some aging and character change as a way to represent the ongoing war for the Mishima Zaibatsu – but it doesn’t manage to have nearly as much fun with it as Netherrealm’s effort. In general, I’d love to see more games experiment with these sorts of journeys.

I’ve always enjoyed MK a great deal, but any regular reader of the site will know Street Fighter is my one true fighting game love. I hold my hands up here, however: in matters like this, MK plainly has the edge. Sure, Street Fighter 5 had Ken drop his crimson gi, bust Cody out of prison and gave Gouki that ‘Akuma Matata’ haircut, but the world of that series has – like so many – felt static, each entry an enclosed time capsule. I imagine a middle-aged Chun-Li as a bit like present-day Michelle Yeoh, and that concept is too good not to mourn. Bless Mortal Kombat for striking out to fully explore and exploit its history and age – it definitely works.