Breath of the Wild is the first voice-acted Zelda game, but its story is delivered almost entirely through flashback – and you need to unlock each memory. Here’s where to find all of the Recovered Memories to learn the truth of 100 years ago.

Once you visit Impa in Kakariko Village and have all of the basic runes of your Sheikah Slate restored, she offers you a task and triggers a new main quest: you’ll need to locate places you visited in the past in order to reawaken memories of 100 years ago. This is how much of Breath of the Wild’s story is delivered, through lovely context-filled flashbacks. They’re well worth viewing, though getting access to them can be a little bit frustrating depending on how much you like easter egg hunts. 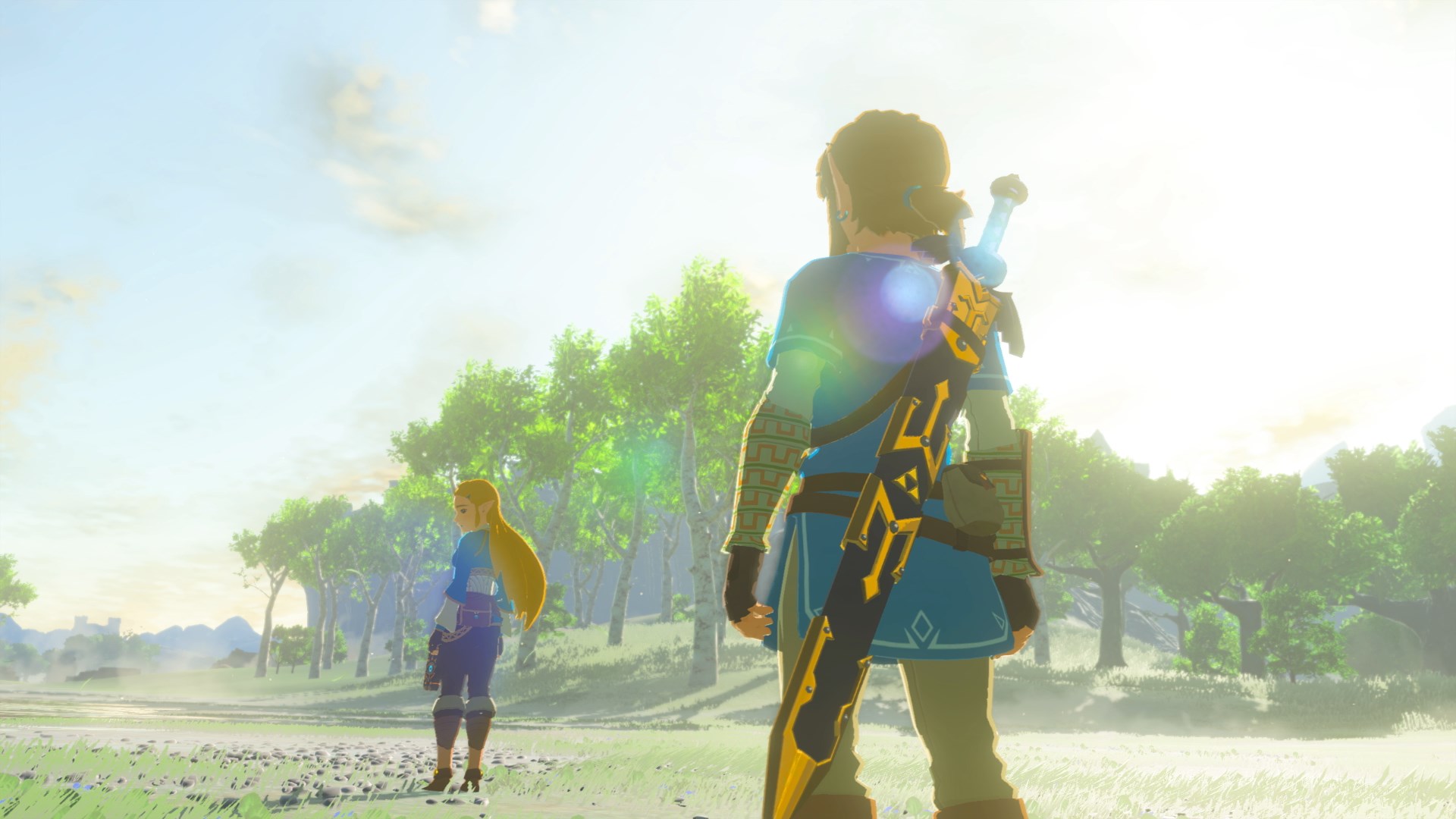 The Legend of Zelda: Breath of the Wild: Locked Memories Quest – where to find all the recovered memories

Impa will unlock 12 photos in your Sheikah Slate, and each points to a different part of the world. When visited each will trigger the awakening of a major event from 100 years prior for Link, offering important information.

There are 18 recovered memories total. Twelve are found through the Sheikah Slate, one is revealed to you when the other 12 have been found, and the others are given via story events. Here’s how to get them all.

As an important note, the second, fourth, sixth, tenth and eighteenth recovered memories will be awarded to you over the course of the game’s main story – so don’t worry about these. The eighteenth and last in particular is optional and will be revealed generally very late on (though as always with Breath of the Wild, it depends how you play) – it triggers if and when you pick up the Master Sword. They’re not part of this main quest.

This memory is the first photo on your Sheikah Slate and is is pretty easy to find – if you look on the map, there’s a circular sort of place right in front of Hyrule Castle. This is the Sacred Ground Ruins. Head there and you’ll find this memory – it’s an interesting one, since it introduces you to some very key characters. There are a number of guardians around this area, so be careful when you go to grab this one, especially if you do it early on.

This memory is the second photo on the Sheikah Slate. It’s found just north of the plateau where you started the game. Look on the map for the area in Central Hyrule marked Hyrule Field. Zoom in – you’ll find the Exchange Ruins, Aquame Lake, the Forest of Time and the Gatepost Town Ruins. The nearest landmarks are the Oman Au Shrine and the Great Plateau Tower – Lake Kolomo is slightly north from both of these. The memory overlooks Lake Kolomo, looking towards the Dueling Peaks – the route to Karariko.

This is the 3rd photo in the Sheikah Slate. You’ll find this memory in the Tabantha area of the map. Just to the south of Piper Ridge (which is to the West of Tabantha Great Bridge), you’ll find an area called Ancient Columns. There’s a Shrine here – the challenging Tena Ko’sah Shrine. The memory spot is right in front of said shrine.

This memory is associated with the 4th photo in the Sheikah Slate. It’s found at the Kara Kara Bazaar. Look at the Gerudo Desert on the map and then find Gerudo Town and Gerudo Desert Gateway. The Bazaar is at the halfway point between the two, and is difficult to miss. The memory trigger can sometimes be hard to see in the bright desert heat, but it’s on the right side of the Bazaar when you look from the main shop.

This memory is the 5th on the Sheikah Slate and is found in the Eldin Canyon area, the area on the outskirts of Death Mountain. The closest recognisable landmarks are the Woodland Tower and Minshi Woods – this is to the east of those. It’s also to the north and slightly to the east of Pico Pond and the Mirro Shaz Shrine. It’s up on the hills overlooking Hyrule Castle.

This memory is the 6th image on the Sheikah Slate and is found just north of Central Hyrule and Hyrule Castle, between Hyrule Ridge and the Great Hyrule Forest. The nearest landmarks are the Monya Toma Shrine and the Serenne Stable. Head a little south east from these; there are two small pools that are (if you zoom in) near Irch Plain.

This memory overlooks Lake Hylia’s enormous bridge, but is a little distance away. It’s the 7th memory on the Sheikah Slate. It’s found on a hill that’s sandwiched between Scout’s Hill and Deya Lake. These hills are marked on the map as the Hills of Baumer. If you look for Scout’s Hill on the map, it’s just the other side of the Hylia river.

This memory is a risky one to get – it’s in Hyrule Castle, AKA the final dungeon of the game, of sorts. The thing is, you can explore Hyrule Castle any time without consequence so long as you don’t go to Ganon’s lair, though you do so at your own risk as deadly enemies are all over. There are multiple ways in, such as via swimming up waterfalls, going to the docks or gliding in from afar to avoid the attention of guardians or simply stocking up on health items and making a full-on assault. The castle itself is threatening and oppressive but also absolutely surviveable for a brief visit from early on.

Once inside, this memory is found on the Western side of the castle, high up. As far as I can tell you’ll need to head outside and do at least a bit of dodging guardians. In a Western Keep sort of area look for a room you’ll notice is Zelda’s quarters – there’s a diary written by her in here. Climb the wall to the second floor here and you’ll notice a small walkway – the memory takes place here. Consult our images, as finding the exact room can be a challenge.

This memory is found in the Akkala Region. It’s the 9th photo on the Sheikah Slate. Find the North Akkala Foothill – there you’ll be able to see the East Akkala Stable and Katosa Aug Shrine. Head directly West from there towards North Akkala Valley and Ordorac Quarry. Nestled between these two is the Spring of Power, and this is where the memory is recovered.

You’ll be able to find this memory, the 10th photo on the Sheikah Slate, up in the Safula Hill area to the west of Central Hyrule and east of Satori Mountain. Among this area is the Sanidin Park Ruins – once you get onto these high mountains look out for the ruins with a huge horse statue – this is where this memory is found.

This memory is the 11th on the page of memory photos in your Sheikah Slate. It’s found in the shadow of Lanayru. To the West of the mountain you’ll find Naydra Snowfield – this is actually really very useful, and the snowfield leads past Purifier Lake into Lanayru Promenade. It’s between these points at Lanayru Road – East Gate that you’ll find this memory to recover. Things got pretty bad, huh.

This memory is the final one, the 12th on the Sheikah Slate pictures. It’s located just to the North-East of the Bottomless Swamp on the east side of Hyrule Field. If you look for some text on the map that says ‘Hylia River’ in between the Bottomless Swamp and the Kaya Wan Shrine and Wetland Stable, this memory is discovered right by this text in a small forested area. 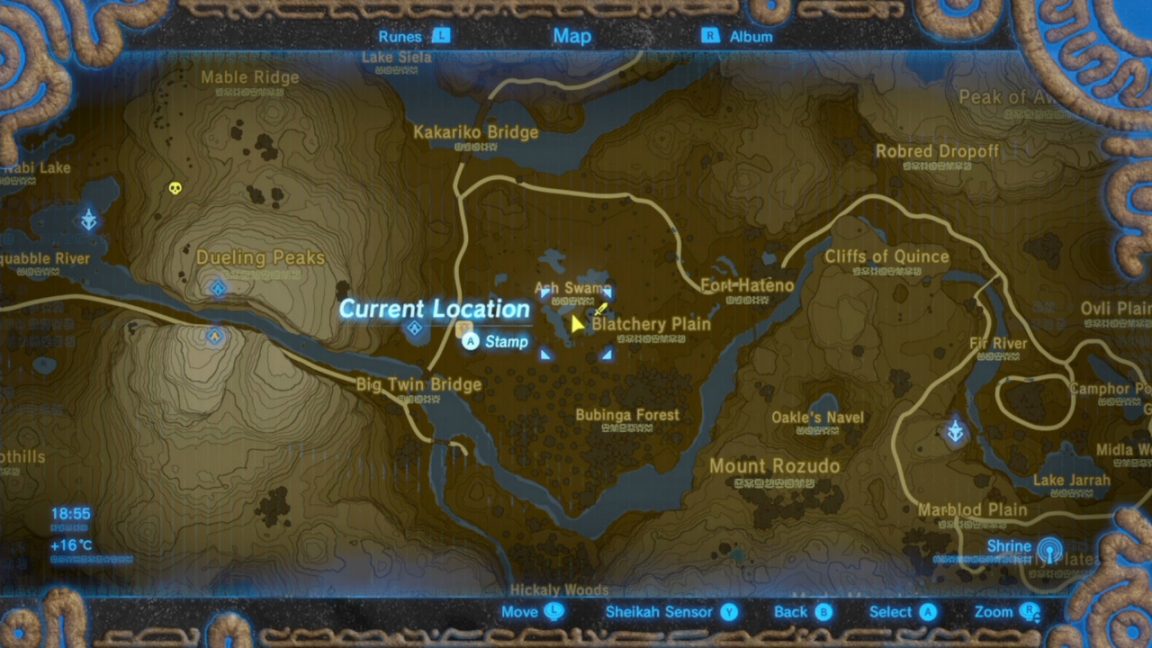 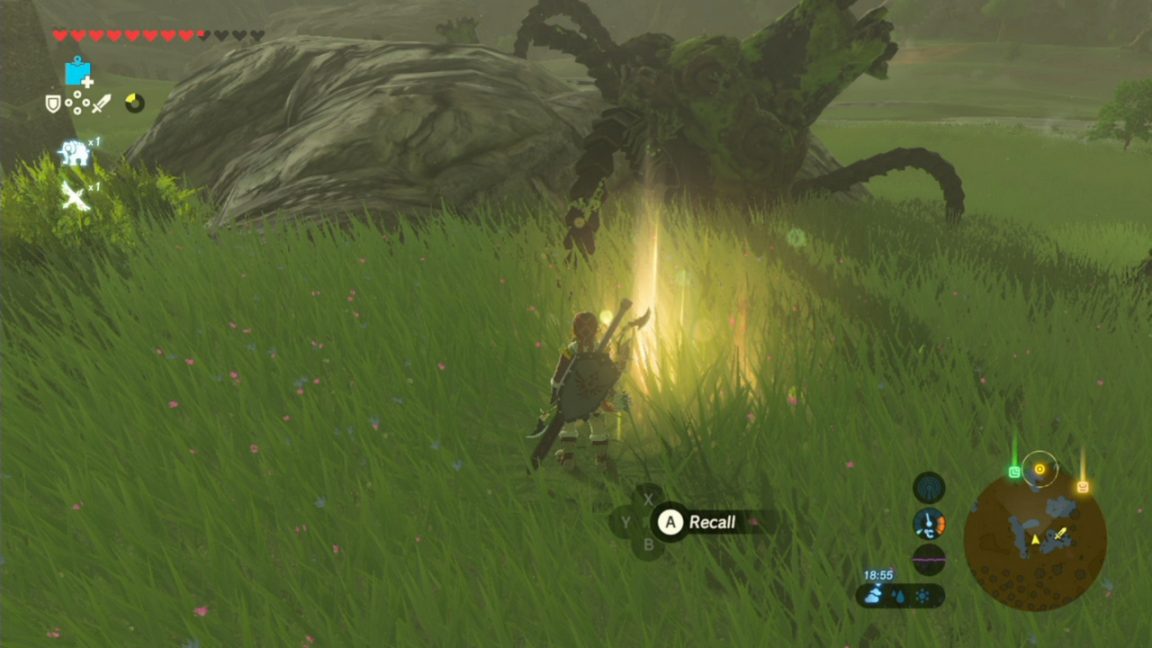 The final memory that isn’t recovered naturally through story progression, this one isn’t backed up by a photo. After recovering all of the other 12 memories in the Sheikah Slate photos, return to Impa. She will reveal this final memory location to you… and it’s been under your nose since she first gave you back these memories.

Once she’s shown you the image, head south from Kakariko, back over the bridge towards the Dueling Peaks Stable and Ha Dahamar Shrine. To the east of this is Fort Hateno, and between the two is the Ash Swamp area. The final memory is found in this location, the place where things came to a head 100 years ago.