Ubisoft is never cheap. Its games are lavished with every production value known to the industry, as well as a few others it’s invented. The money is visible in the way the seagulls circle over shimmering waves in Anno 1800, or the performance captured axe-sharpening animation of a Parisian who simply stands in the background of a scene in Assassin’s Creed Unity.

Yet the publisher does take advantage of ways to speed the process of development when it finds them. Take the Far Cry games, for instance. Since Far Cry 3 in 2012, there’s been a new entry almost every year: a numbered sequel, followed by a spin-off, and so on. That remarkable pace has been achieved, in part, by building on existing material. The interim Far Crys in particular have made a habit of reworking the world maps of the numbered games – keeping the topography they already know makes for satisfying exploration, while turning back the clock to the Stone Age, or forward to an Arnie-style future.

This year, that practice resulted in a new kind of post-apocalypse. New Dawn buried Hope County, Montana, the fictional setting of Far Cry 5, under the rubble of a nuclear war. It embellished its blue skies with strange auroras, turned its rivers emerald, and covered the ground in the brightly coloured flowers of a superbloom. But Hope County is still recognisable – a fact that doesn’t cheapen New Dawn or the game that came before it, but actually magnifies the power of both. 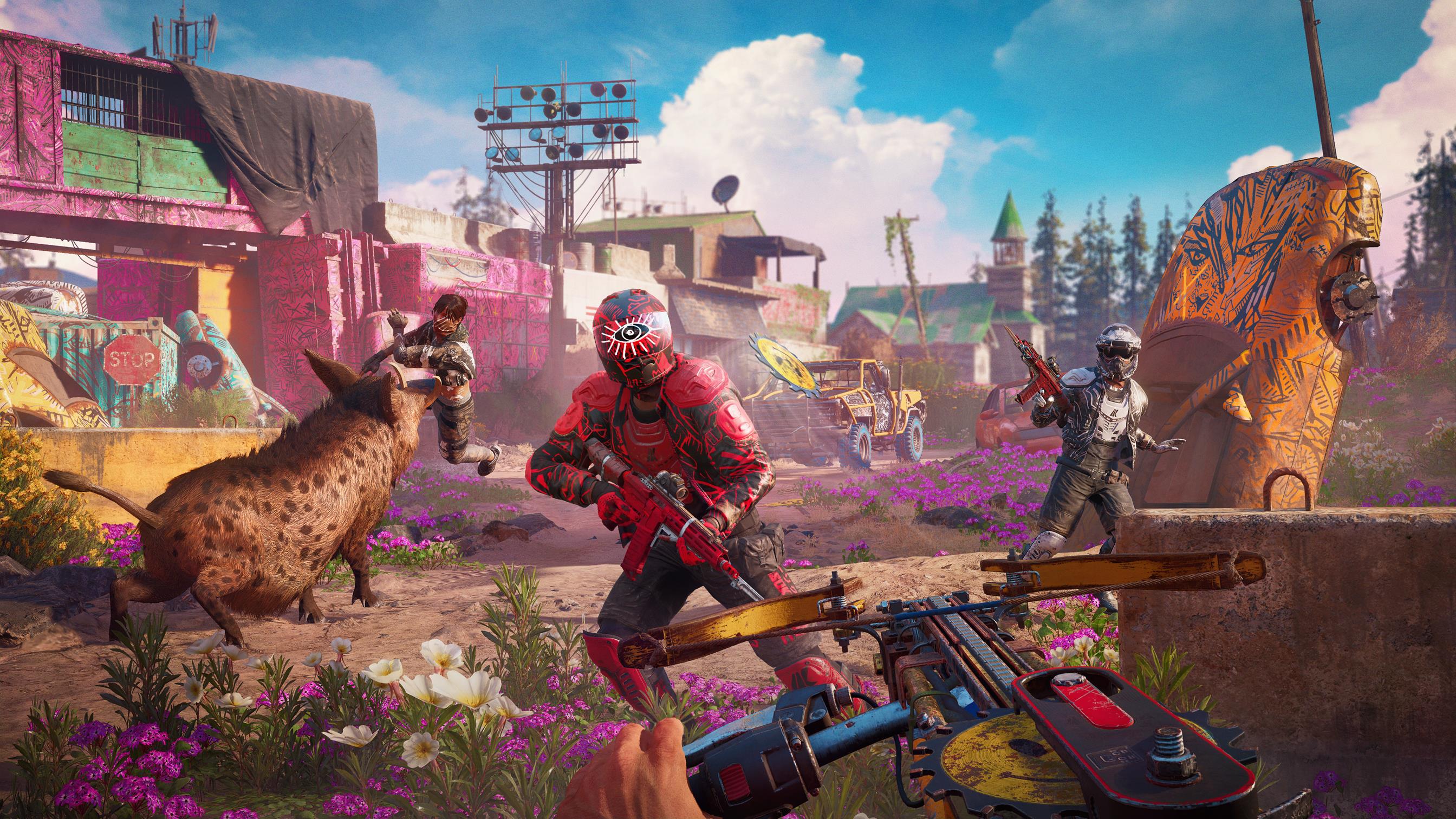 New Dawn is set one generation after the events of Far Cry 5. Sometimes, when out hunting for Highwaymen between the neon pink cars they’ve buried upright in the dirt like totems, I suddenly recognise the junction of a road, or a church spire that survived the bombs. It’s similar to the real-life sensation of approaching a road you know from an unfamiliar route – your brain hurrying to stitch two unexpectedly related pieces of information together.

Having spent 50 hours in Hope County prior to its violent reformatting, these sudden snapshots in the memory make for genuinely eerie exploration. It’s a quality the game consciously feeds off, too – one set of side missions sends you out with a pack of old photos to find important Far Cry 5 locations as they are in this new yet familiar valley.

It’s not just the environment, either. Occasionally a character I know crawls out of the bunkers, older and more damaged. I didn’t feel much for the mother-daughter duo that runs New Dawn’s player camp, Prosperity, until I spotted the surname: Rye. Kim is the same new mum I rushed to hospital in a pick-up during Far Cry 5 – and her daughter, Carmina, was the baby who represented hope for the future in troubled Hope County. Now that she’s a gun-for-hire, I feel a vested interest in keeping Carmina alive, since I helped bring her into the world.

The generational divide between the characters in Far Cry: New Dawn might be the greatest in human history. The older lot, like me, remember what came before. When Kim reminisces about the time she announced her pregnancy to the whole town in Fall’s End – part of which now forms the outer wall of an enemy outpost built from shipping containers – Carmina comforts her. She doesn’t remember the place she was born, but she knows its loss was important to her mother. 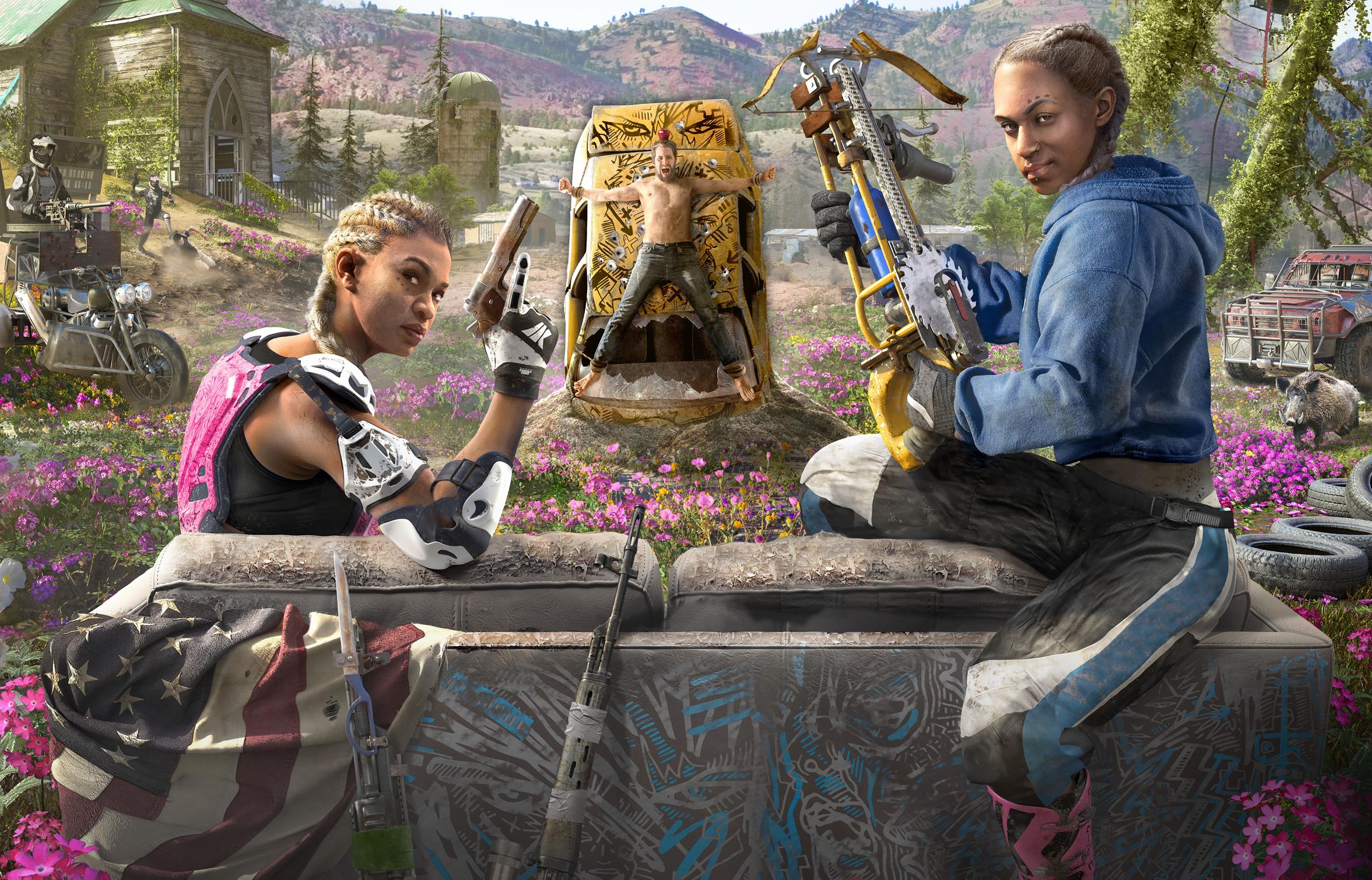 Nick Rye, the guy with the plane in Far Cry 5, is still kicking about – and frustrated that nobody around him shares his hatred for the Peggies, the remainder of whom have now turned in their weapons. It’s perhaps for the best that the younger generation doesn’t share his grudges, but for Nick, the memories make it harder to forgive his old enemies. I feel the same way.

Fallout 4 began before the bombs for a reason – Bethesda hoped its intro would give you a sense of the world you’d lost, and a real desire to rebuild. But a series that shifts its setting with each installment can’t compete with the deep connection I feel to Hope County’s geography. Looking at 2019’s slate of post-apocalyptic games, it’s odd to realise that New Dawn has an advantage over all the rest. In this Far Cry spin-off, the loss is real.