Tomislav Pongrac’s indie development story starts off like many others. A developer looking for a creative outlet, to make games that people will enjoy, influenced by art and entertainment, looking to keep the studio alive and bubbling with new projects, but realistic that it’s never going to make anyone rich.

But I’ve never met of any other developer who is so obsessive about their creation that they use their own body – put it through extreme physical and dietary pressures – in order to recreate something as unique as their own metabolism in-game. Pongrac starved himself, catalogued his bowel movements, woke at 3am to eat, forced himself to get fat and high on sugar, and more – so he could capture all those physical changes in his game.

Before his survival game, Scum, was even a concept, Pongrac’s analytic research would have given some indication of the meta to come. Around three years ago, while the Croatian studio Gamepires was “depressed” after the release of its racing game Gas Guzzlers, Pongrac began to research the top 10 games on Steam. Not with the intention of copying a hit, but seeing what, how and why they had proven popular.

“I was trying to find a compromise between what my team is capable of doing with six people, the amount of quality we can bring, and the ways that we can improve the genre,” he tells me during Reboot Develop. “We didn’t want to make a survival game at the time, we just wanted to see what it would be capable to do.” 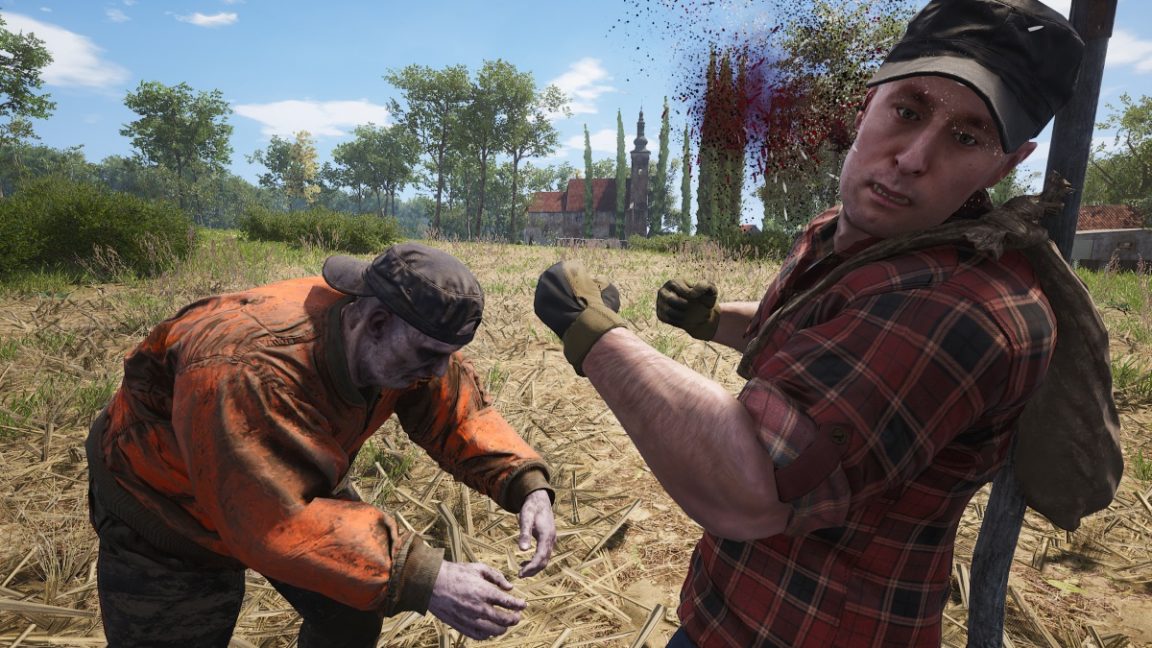 “First I starved for one day, then switched to a normal diet so I wouldn’t go too extreme. Then I took two days without food, and then three days”

After presenting his findings about sandbox and survival games to the team, Pongrac said they just looked at their feet, uninspired by his research. “That was the first and biggest challenge. You start to doubt yourself and your colleagues,” he says.

It wasn’t just the swelling interest in survival and sandbox games at the time that inspired Pongrac, but the statistics of World of Tanks, and his own fond memories of character creation in tabletop role-playing games Advanced Dungeons & Dragons and Cyberpunk 2020. This is what would eventually make Scum stand out from other survival games; drilling down into the character, your physical capabilities in-game, way beyond basic strength, skill and intelligence stats.

“Our character creation system is basically a classic RPG system which has our unique soft skill sets. [Tabletop RPGs] helped a lot with this character creation process. Now you have to understand that in Scum I have incorporated different parts of my life.”

Pongrac has always been a physical person, taking up karate and other martial arts when he was younger, but moving on to weights and cardio because he “got too old to be beaten up.” This physical progression inspired an obsessive focus in Pongrac, to the point where metabolism – the conversion of food to energy and protein, and the excretion of waste – became a major interest. And this is the real differentiator for Scum. This is a game that tracks vitamins, calories and digestion. You leave marks where you urinate or defecate, which can be used to track you down. Scum counts the number of teeth you have, which affects what you can eat.

All of this originates from his experiments.

“The best way to try things, especially if you’re working on a survival game, is to try to survive,” says Pongrac. “We have to have food and water and a place to dump. These are essential to us. I decided to try a number of different tests on my own body.” 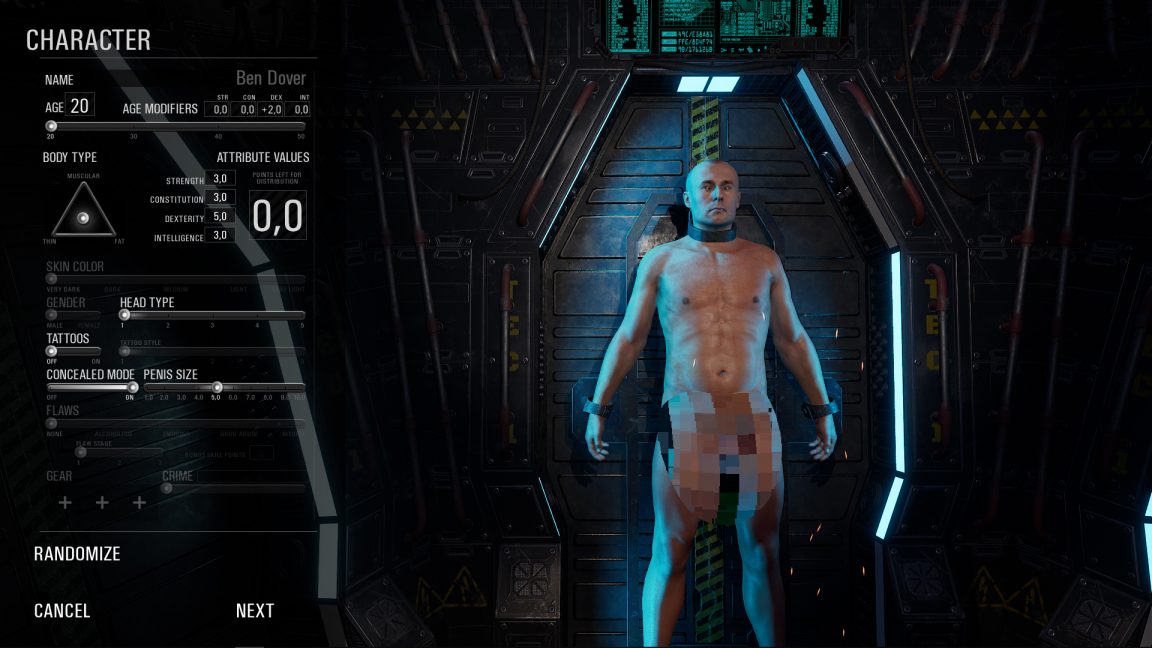 The first experiment was to deny his own body 600 calories less than he needed on a daily basis. For three months.

“I’d read that people during the second world war in a concentration camp were provided with 800 – 1,200 calories per day which is way below your daily needs,” he says. “I definitely didn’t want to eat just 800 calories. But what happens if I eat 600 calories less than I need? This experiment lasted for three months during which I did only cardio – running and spinning. I noticed that the first thing that I lost was my muscle mass and then fat. After three months I was so weak that I couldn’t open a jar of pickles. That was enough.”

Pongrac continued with the experiments, nearly all of which lasted between three and six months, and during which he meticulously logged his caloric intake and other stats. His second experiment involved eating whatever he wanted, whenever he wanted, and his muscle mass returned after a month. “That’s astonishing,” he says. “These things are normal for human beings. Your muscle has memory. Even though you lose it because it’s simpler to dissolve muscle to get energy than fat. And once I got back to my normal weight of 69kg, it stopped. It stopped no matter how much I ate or did, it stopped.”

The third experiment required eating between 8-10 meals per day, each being 300 calories, like a normal bodybuilding routine for improving muscle mass. “I grew to almost 79kg which is the heaviest I’ve been in my entire life. I never felt better. I had to wake at 3am to eat a meal. It was tedious but it was reassuring to know each plate was 300 calories. I got to the point where I couldn’t put on my clothes. I got to the point where I either stop or change my whole wardrobe. I’m not a young guy. I will be 45 soon and my testosterone levels are lower than when I was younger so it’s much harder to grow muscle mass,” he says. 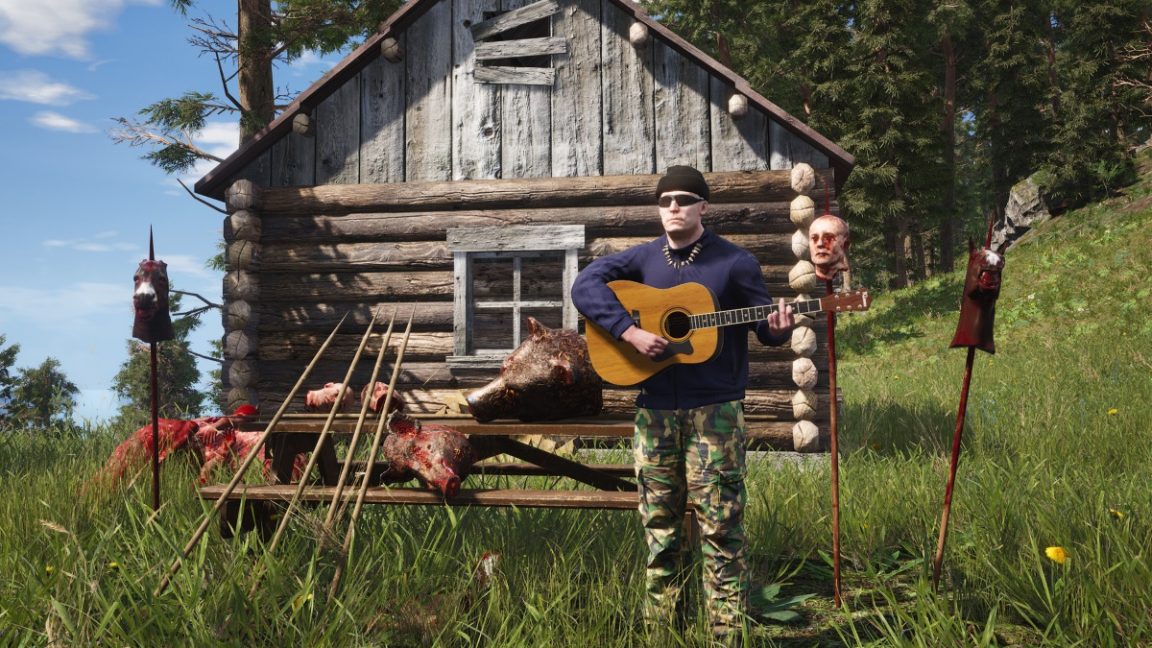 It’s during experiment three that Pongrac’s research gets a little messy, and especially weird when he’s telling me this and looking directly into my eyes.

“I went for a dump at least five times a day,” he says. “The best part, and why I felt so good, was my body was functioning fantastically.”

“When you take a dump you have to take a look at what comes out of your ass. If you don’t have to wipe your ass you’re doing the right job. During that period I didn’t have to wipe my ass at all. That’s a huge amount of time and paper you save”

Depending on how you look at it, all of this is either invaluable research or a tragic waste of time. All of this is optional in Scum. Pongrac is putting himself through pain for an additional feature that you don’t have to really engage with in any way at all. It’s like writing a 100 hour RPG knowing less than 10 percent of players will see it all, but more gruelling.

“This is a huge thing that a lot of people don’t realise the game has, but it’s actually not that important,” he admits.

And yet the obsession continued to the point where Pongrac starved himself, although thankfully not to such extreme lengths.

“Starvation was for three days,” he reveals. “First I starved for one day, then switched to a normal diet so I wouldn’t go too extreme. Then I took two days without food, and then three days.

“When you don’t eat for three days actually you feel really well. My sense of smell got better, but only for food. I work in a small office and if somebody started to eat it was so annoying. I was trying to concentrate but couldn’t do it. It’s like your body is simply wanting this kind of food although you don’t feel hungry at all. The first day was terrible, but after that I believe I could sustain myself at least five days without needing to eat.” 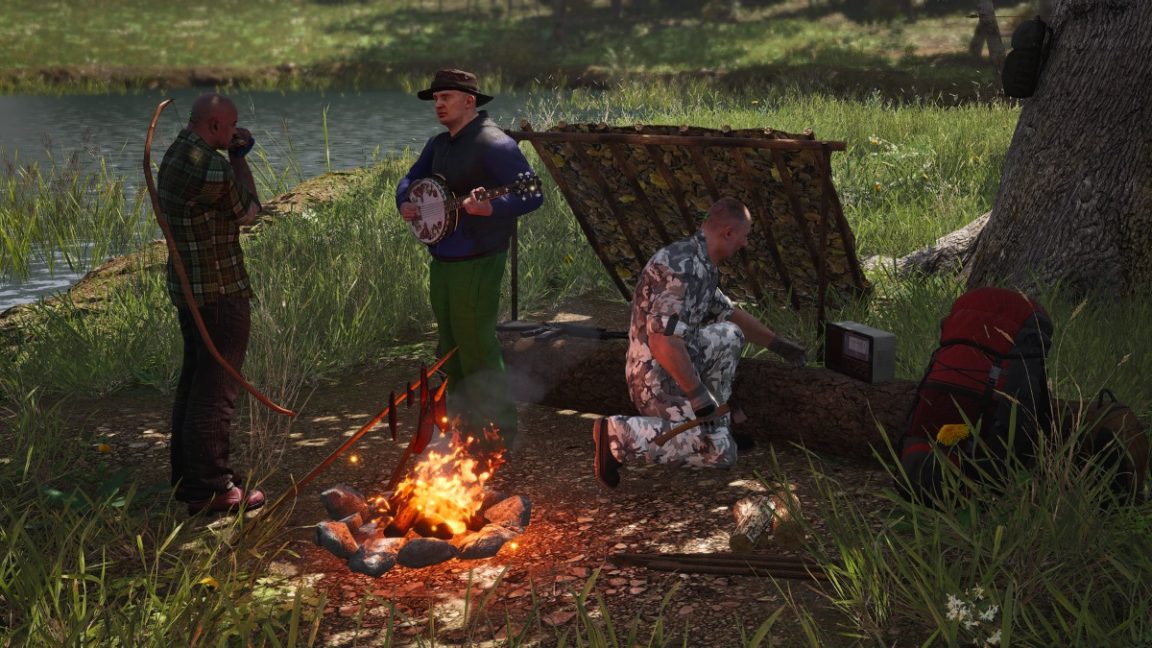 Even when the physical strain of these diets was too much, Pongrac turned a serious injury into an opportunity to continue with the experiments.

“Unfortunately during one of the exercises I had a spinal injury and I had to stop,” he says. “I got really depressed because I was being really thorough with these experiments. I thought, what can I do right now?

“So I tried something really dangerous. In one day I switched from a keto diet to really high carb intake. I continued to do that for months, which means I had sugar, drank Coke, ate everything considered bad. You know what happened? I had diarrhea for three months straight. I had a rash on my skin, I still have it on my face. That was a result of my intestinal flora and fauna which was completely destroyed by carbs. I’m still fighting this. But I felt good because of the sugar, each time I had sugar I would feel fantastic.”

This is all ongoing, too. If Scum is still in Early Access, then Pongrac’s own body experiments must continue. If you’re looking to find out what’s coming in a future update for the game, it will most likely have something to do with intermittent fasting and body fat below 10 percent, which is what Pongrac is currently focusing on.

“I want to see if these things work. What is the connection between this and the game?

“For us, there’s nothing better,” he says “than when you get a random email from someone who’s excited about playing your game who not only enjoyed the game but learned from it and got all these little details that we’ve put inside it, it’s the best feeling in the world. We’re really proud.

“Our characters are fully unique,” he adds. “We made a game with characters that are completely unique. They might look the same because we can’t produce that many character faces, but inside their metabolism is fully unique and will change with time. And that’s the whole point of what I did.”