Following the enigmatic events of Assassin’s Creed Odyssey’s main story, more questions were asked than answered. We haven’t had to wait long for the next piece of the puzzle however, with the Heir of Memories Lost Story of Greece quest.

When you’ve finished this quest, you’ll be able to start the fate of Atlantis DLC.

After downloading the game update file, you should automatically have the quest added to your log. Head into your menu, and you’ll be able to track it.

Your destination is a small islet between the larger islands of Chios to the north and Samos to the south. The easiest way to get there is to fast travel to the southern point of Chios, call the Adrestia, and sail southwards. 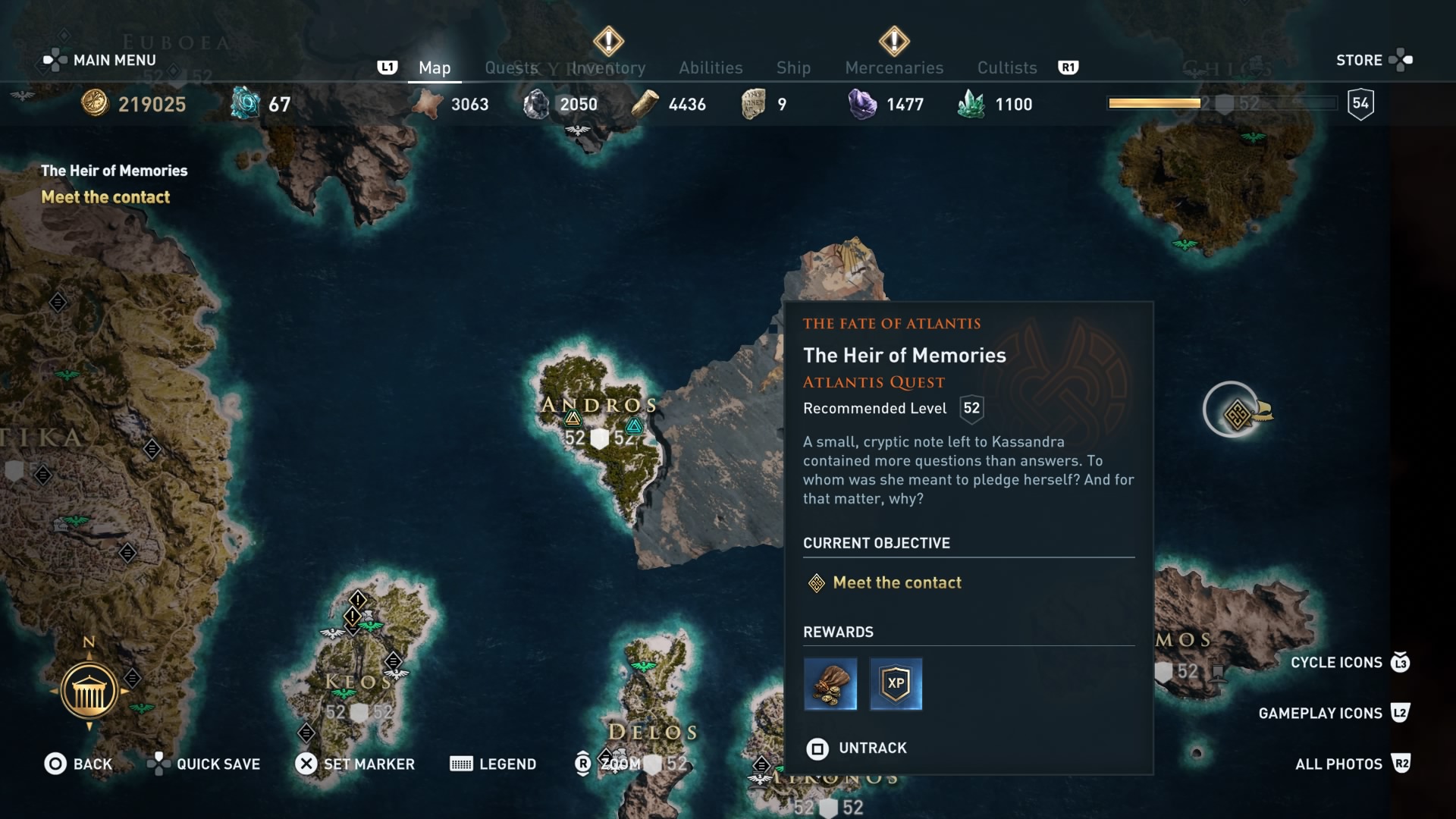 Once you reach the islet, before you head to the quest marker, make sure you visit the only map location here. It’s an alpha animal spot called the Temple of Poseidon, where you can loot the Legendary weapon Poseidon’s Trident which lets you breathe underwater. 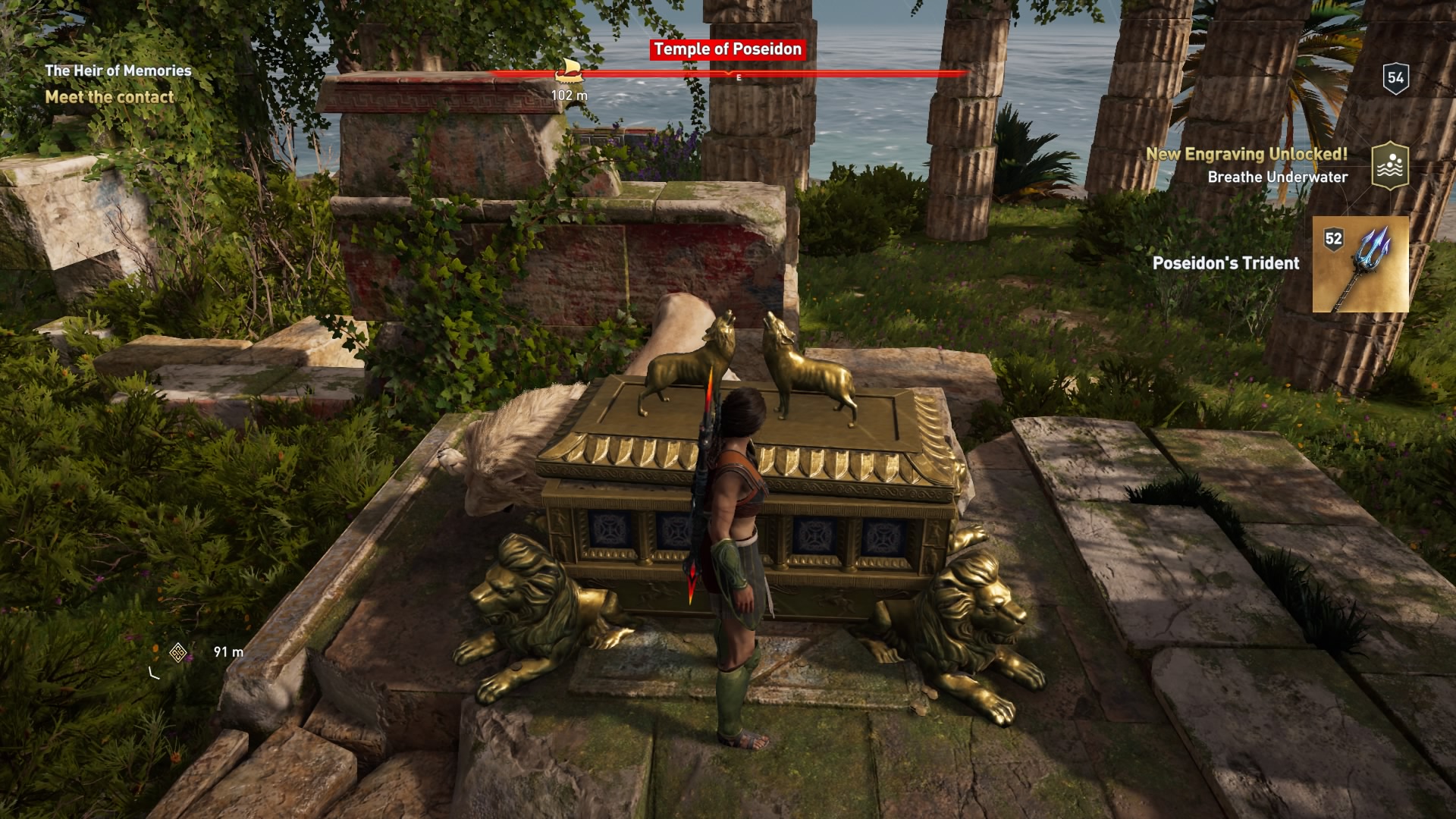 When you’re ready, head to the quest marker and speak to the ethereal being looking out to sea.

It’s Alethia, the Isu you made contact with at the gates of Atlantis.

Throughout the course of this quest line you’ll frequently play as Layla Hassan in the present day. In the first section that triggers, just listen to the dialogue, then walk forward to the quest marker to try and open the gate.

Back in Ancient Greece, Aletheia will send the Eagle Bearer after a man named Theras who has clues to deciphering the symbols on the Atlantean seal. 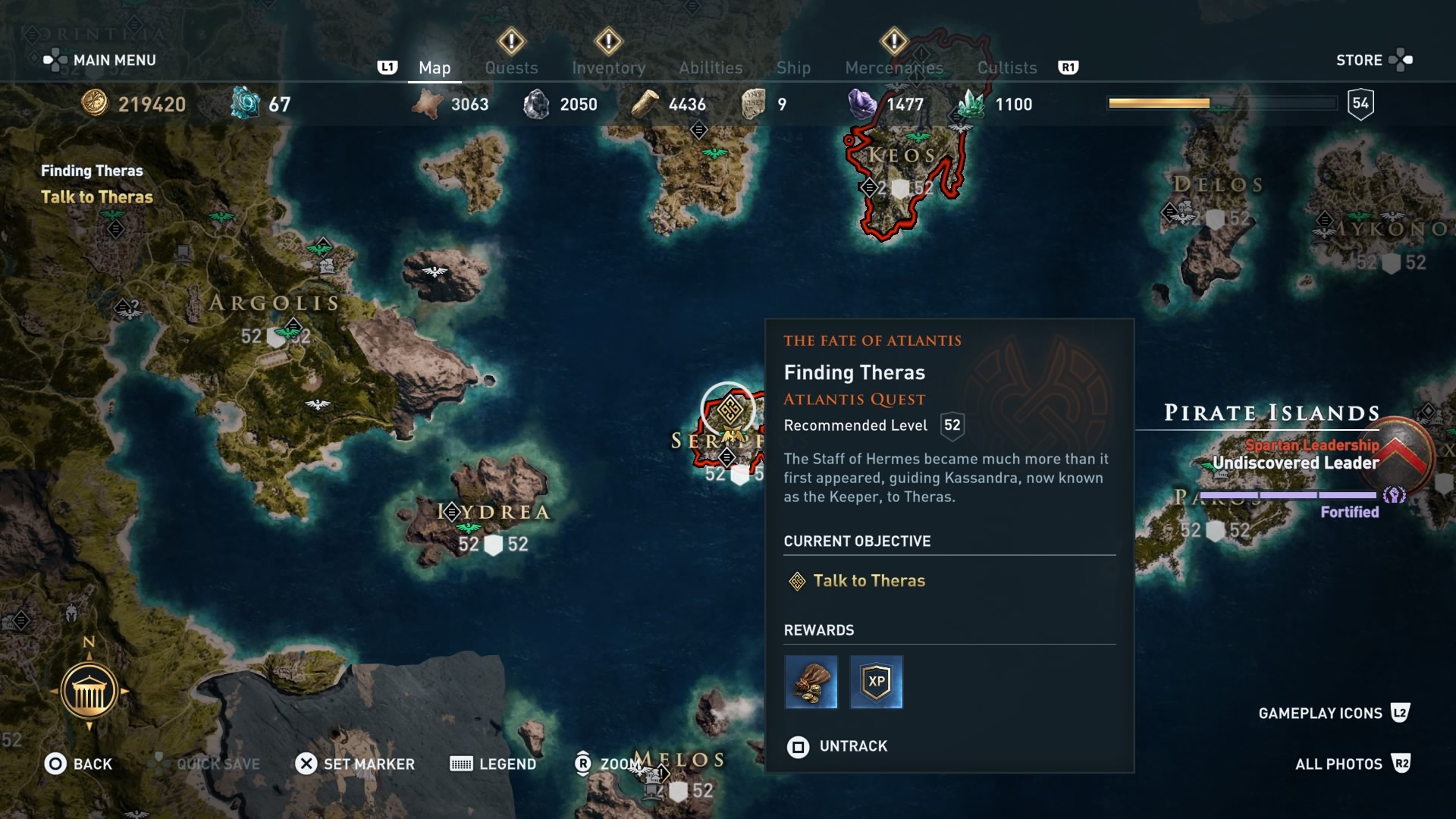 Once you find him, you’ll see he’s being accosted by some Kosmos thugs, distract them, then kill the one that remains.

With Theras safe, ask about the symbols. Theras will give you a map to follow, and you can also recruit him as a ship Lieutenant.

There are three tombs and three symbols to find, all around the centre of the map.

You’ll find need to find and enter the tomb as the Eagle Bearer, then find the symbol as Layla. 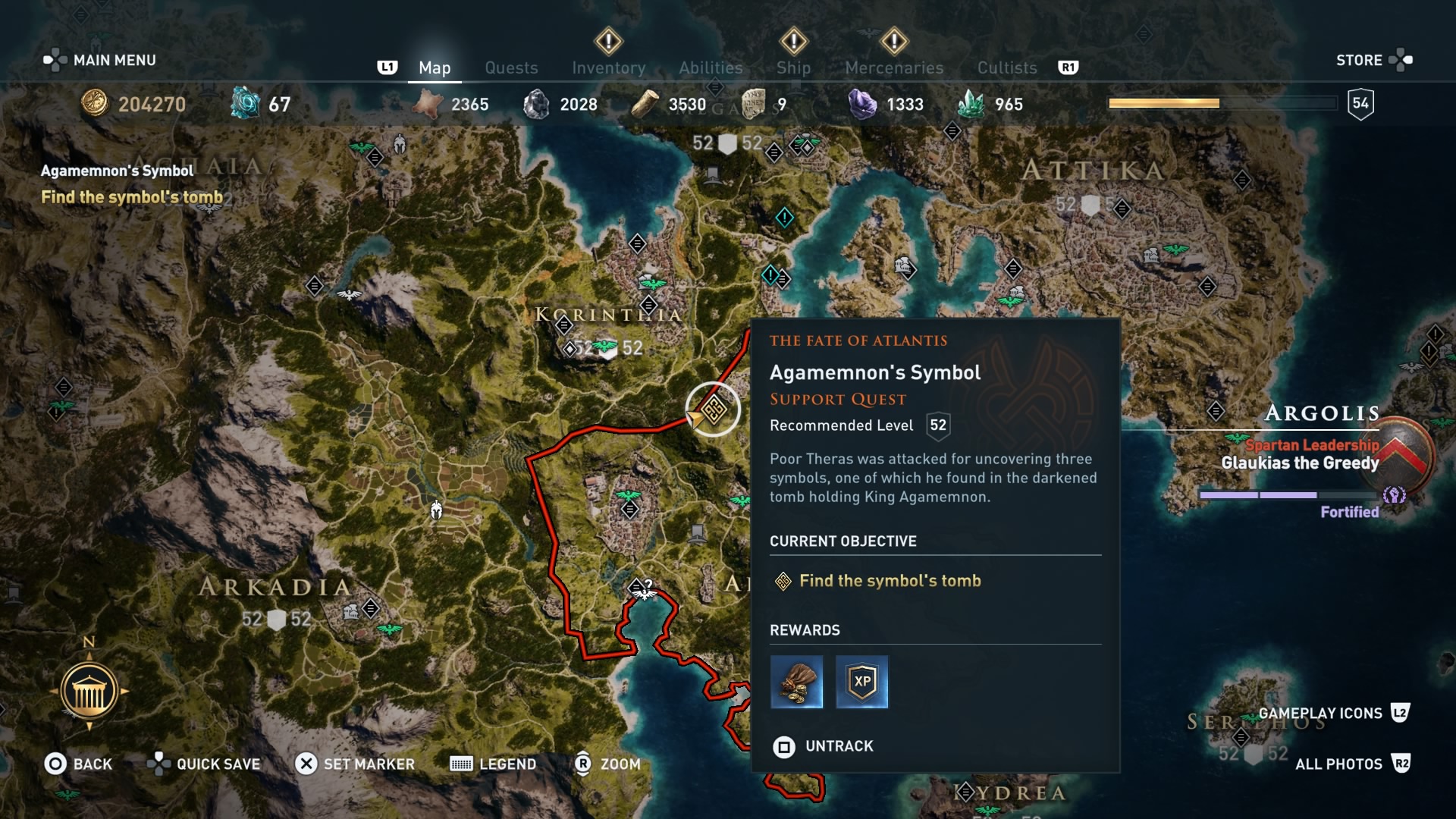 When you get there, speak to Aletheia in doorway and you’ll switch to Layla.

While you’re controlling Layla, you can pause the game for some extra lore to read and listen to. 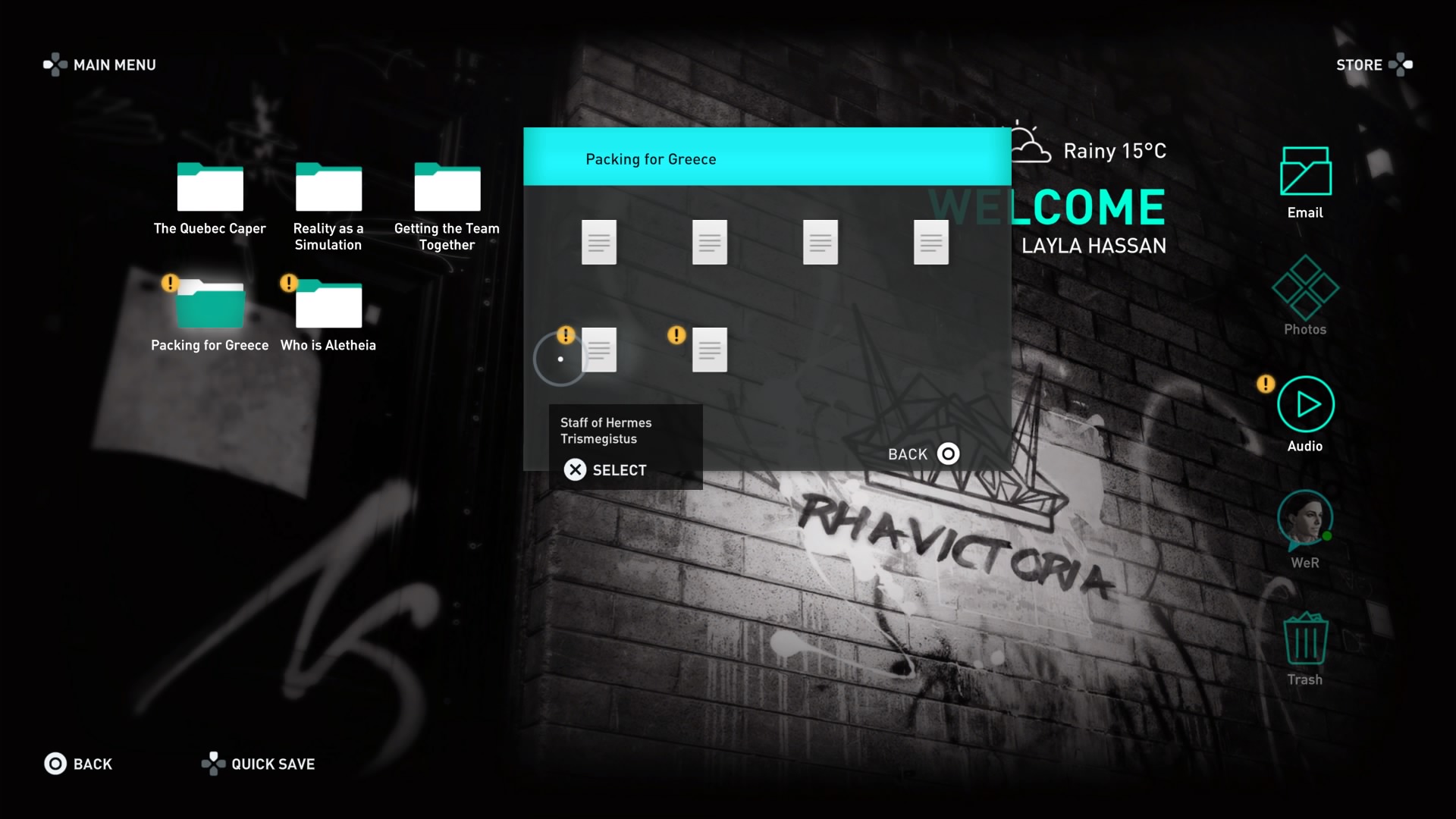 To advance through Agamemnon’s Tomb though, you need to go down the stairs, and left at the bottom.

Then take the first left, go down more stairs, and go right at bottom through the door.

Inside, watch out for floor traps, and move the shelves that’re to the right of the door right up to the wooden barrier.at the other end of the room. 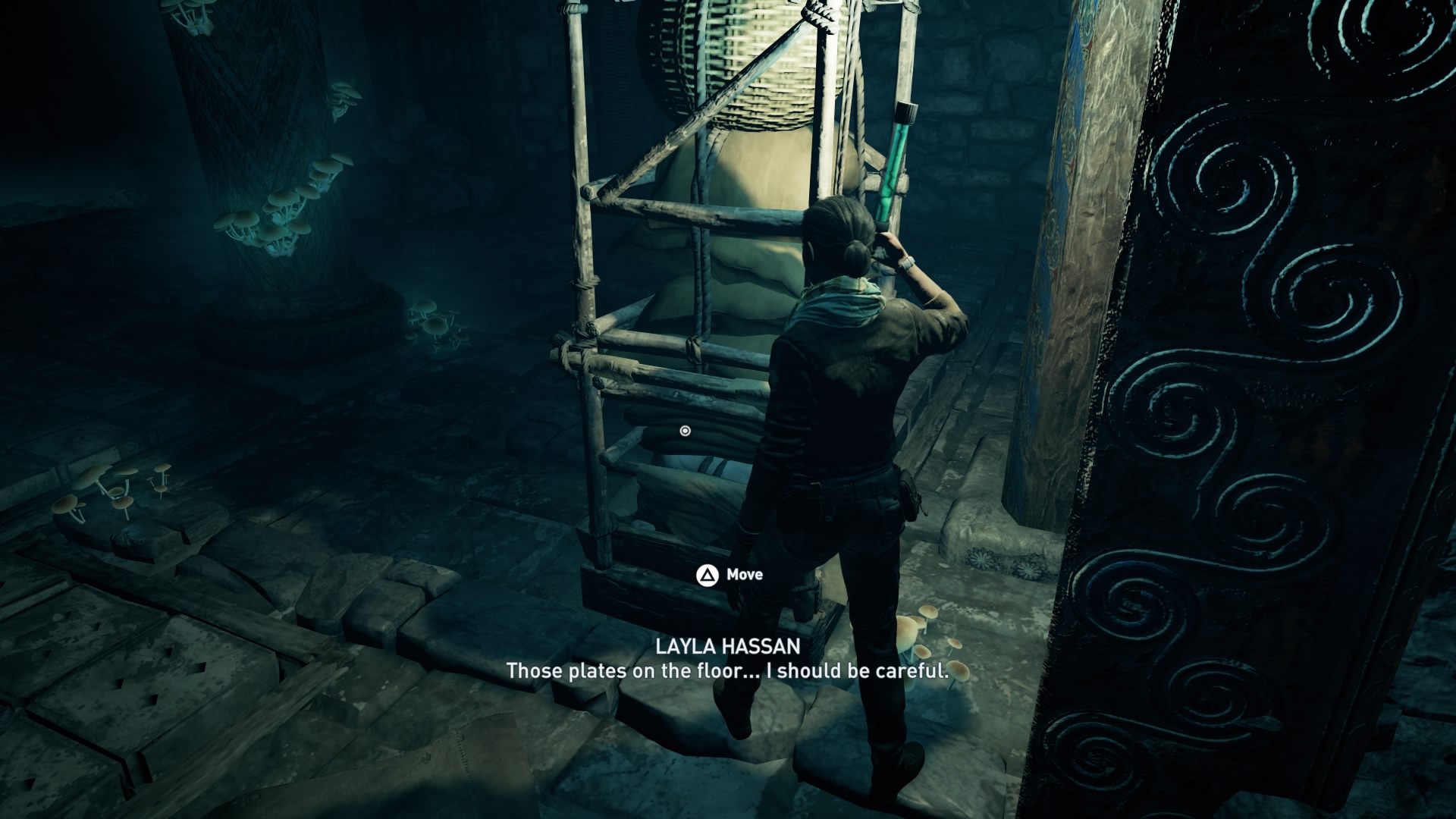 You can then jump over to the other side. 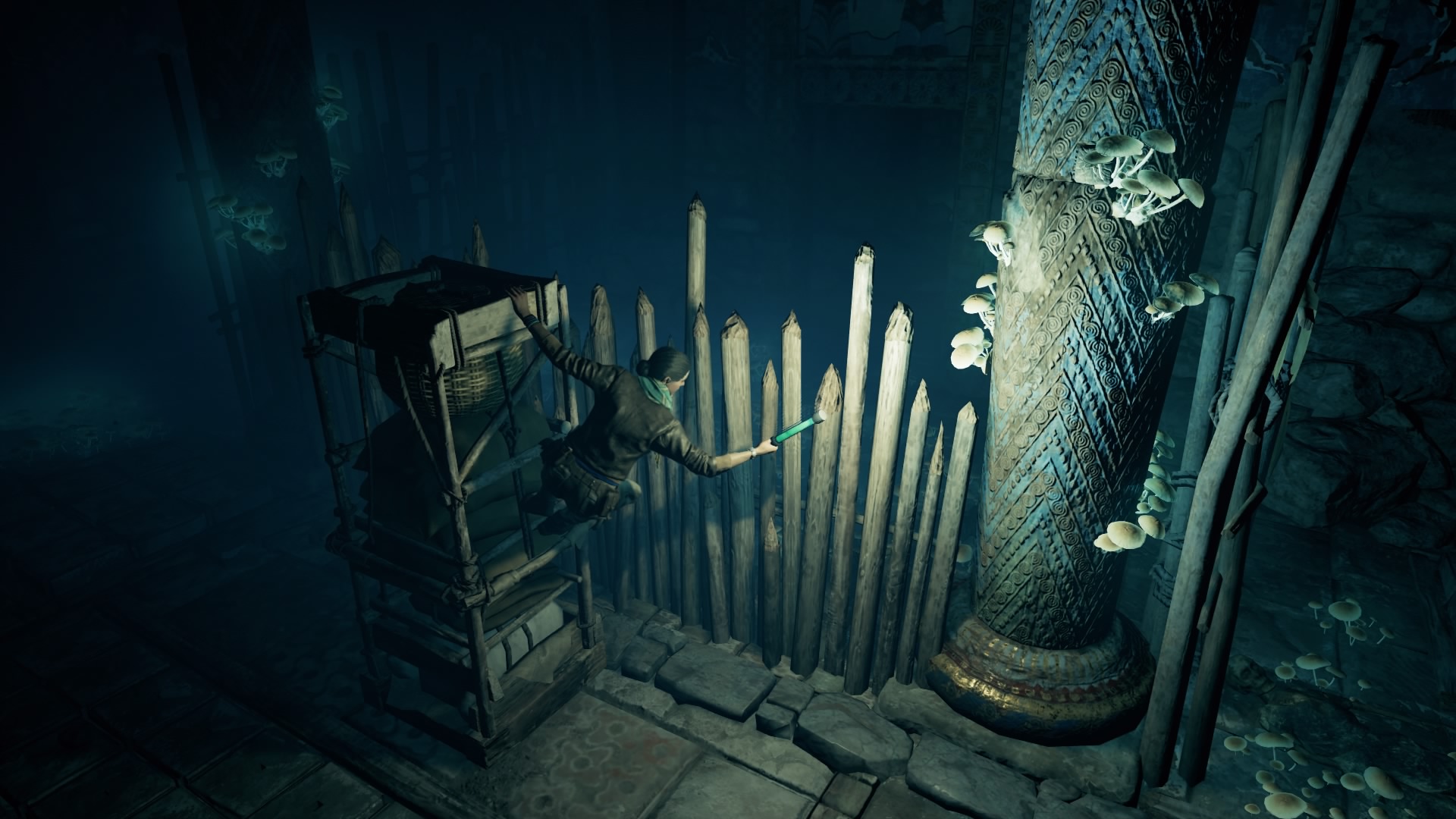 Go through the door on other side, then go right down corridor.

Now go through the door into the room with a big hole, but don’t go down. Instead go over to the left, smash the pots you find, and slide under the gap. 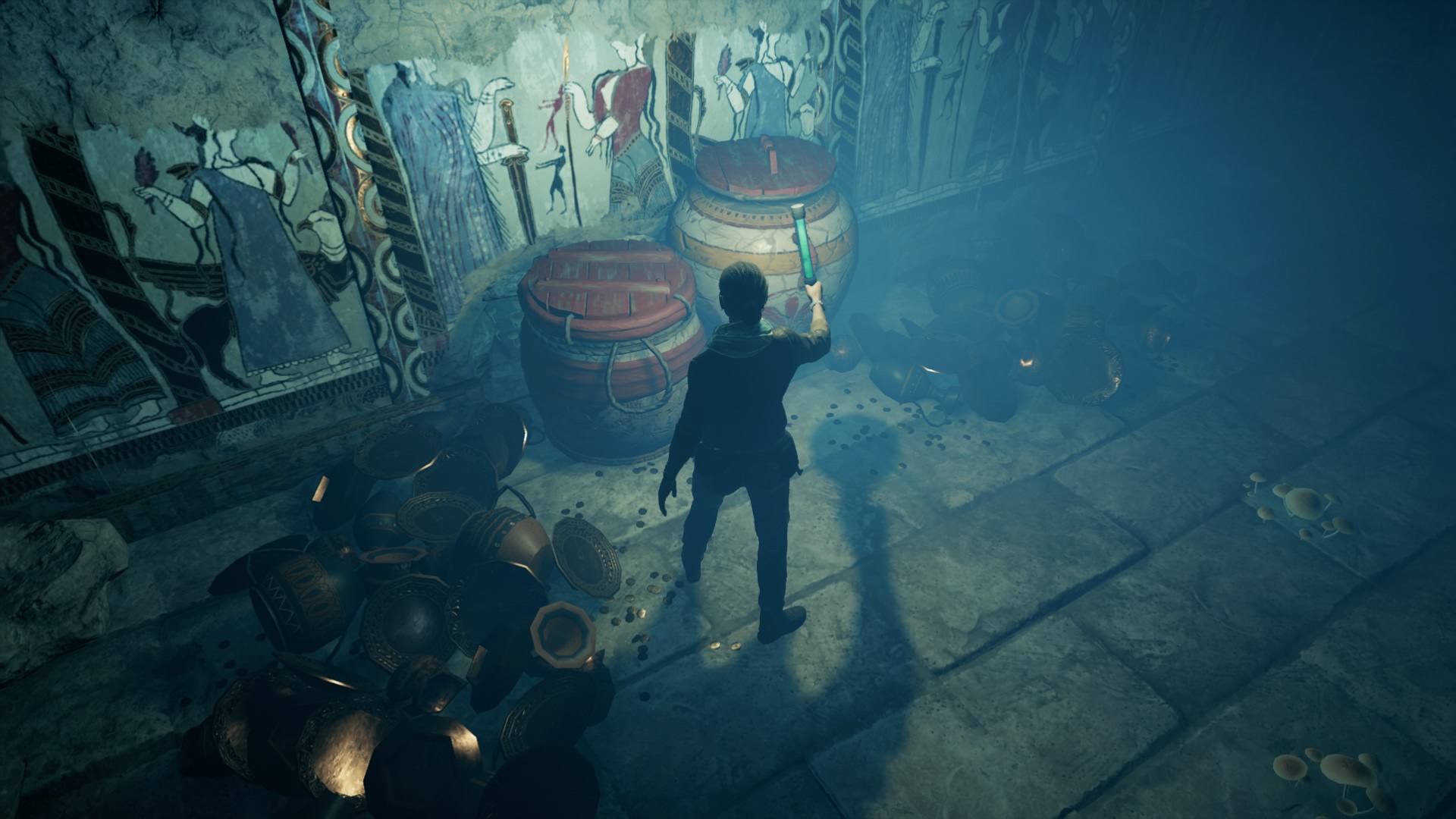 You’ll find the Agamemnon Tomb symbol behind you on a wall. 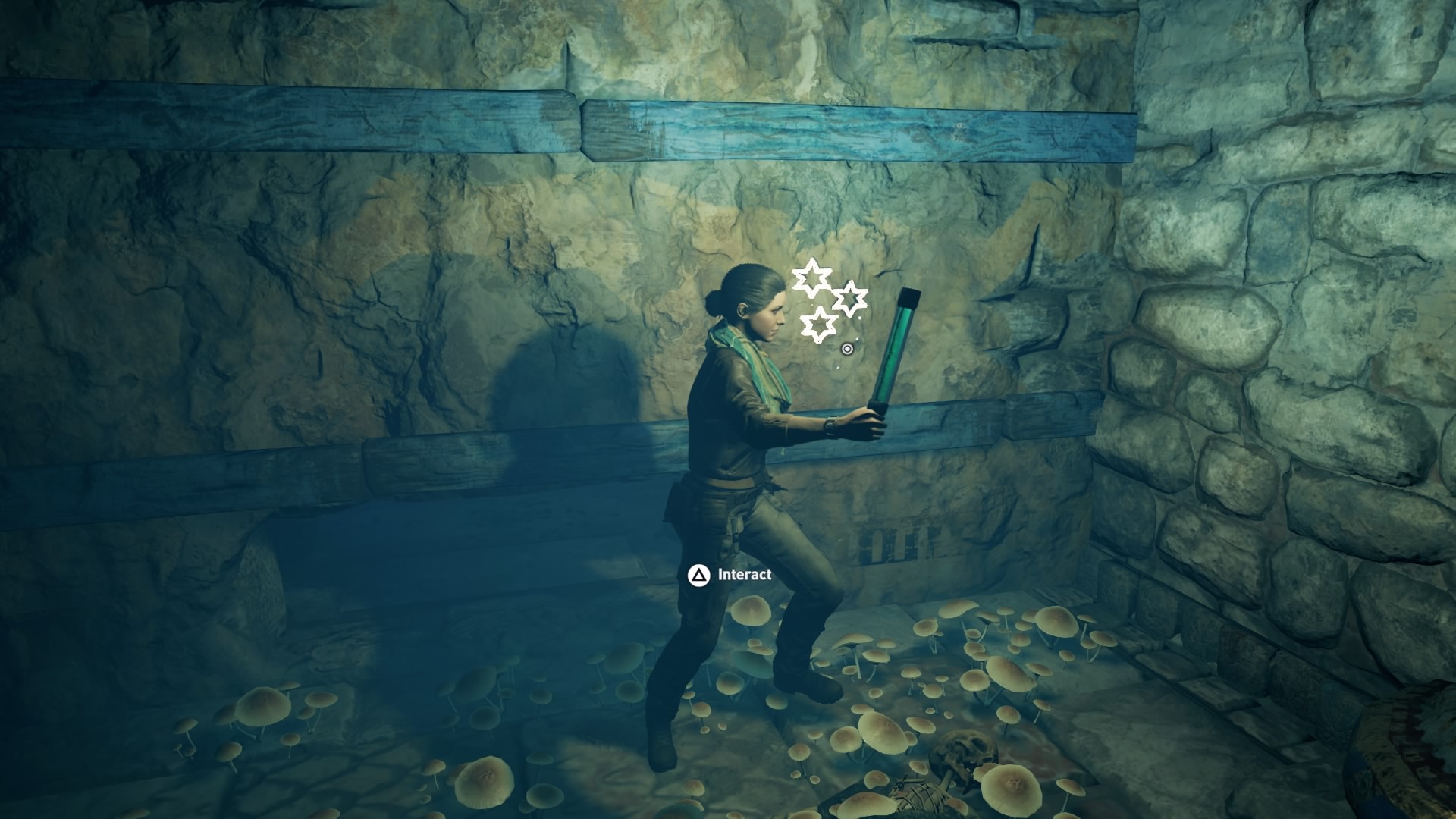 Next up is Eteokles’ Tomb which is on the western border of Attika, to the northwest of Athens, and northeast of Megara in Megaris. The easiest way to get there from the Temple of Apollo viewpoint in Megara. 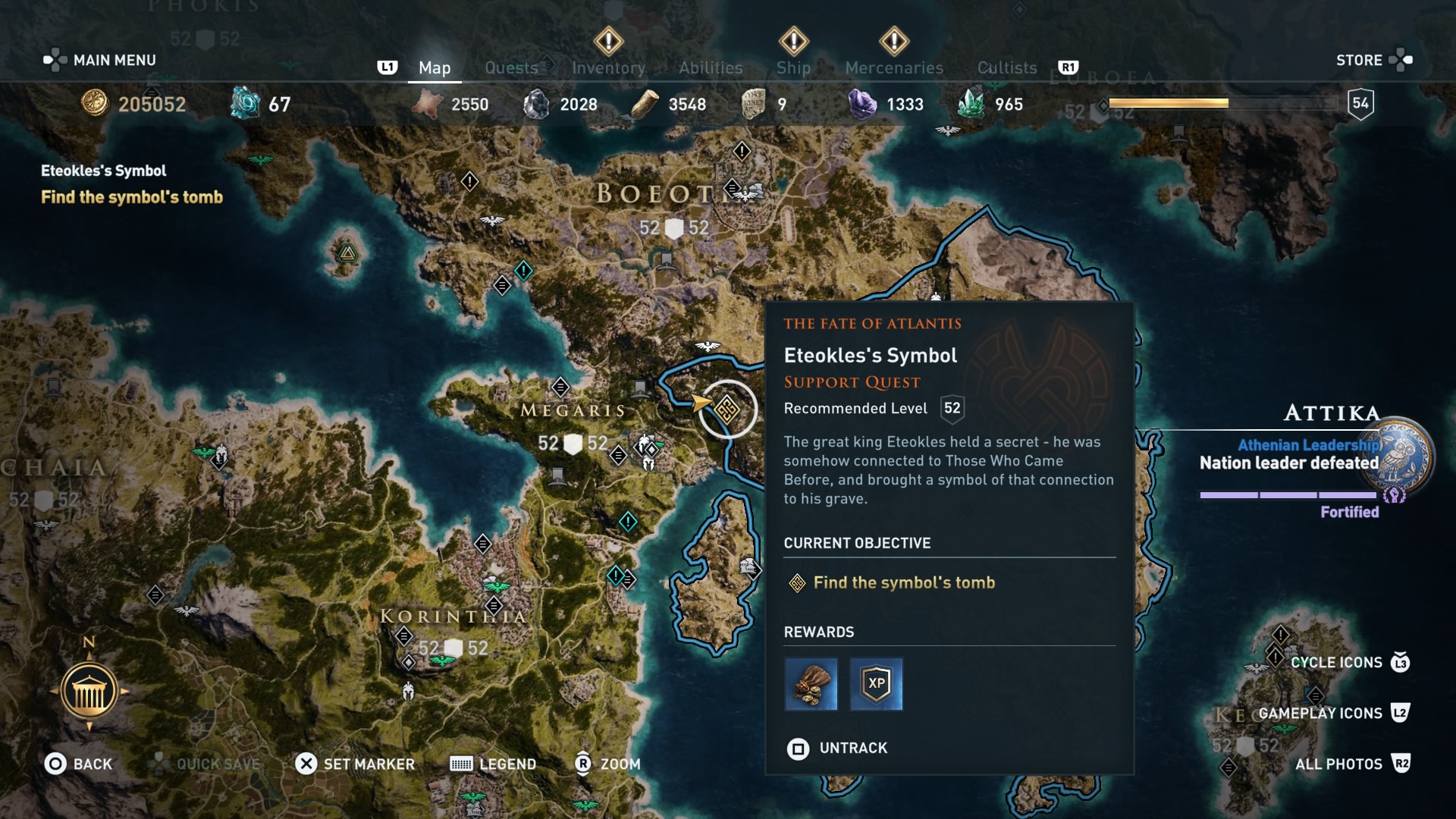 Speak to Aletheia again in the doorway, and you’ll switch to Layla.

This time, turn around when you gain control, go down the stairs, and run over the floor traps as you follow the corridor around.

Go down the next set of stairs, through the door and to right – heading down yet more stairs.

Follow the corridor, then when you reach a new room with wooden panels and boxes, go around to left, smash the pots, and move the first shelf you find back so you can pull the second outwards. 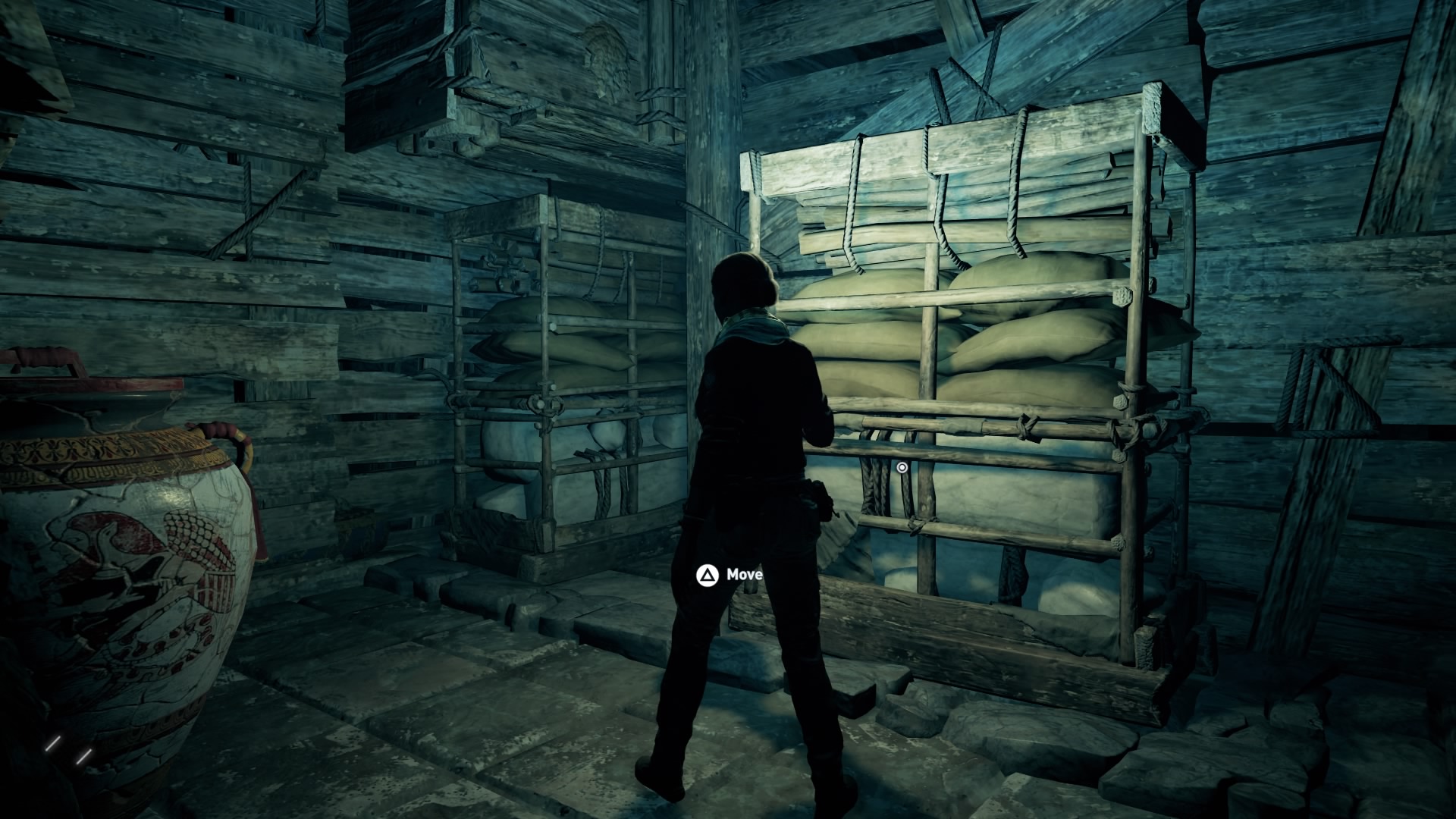 Back around the other side you can then go through the exposed hole, run over the floor traps on the other side, and keep following the corridor. 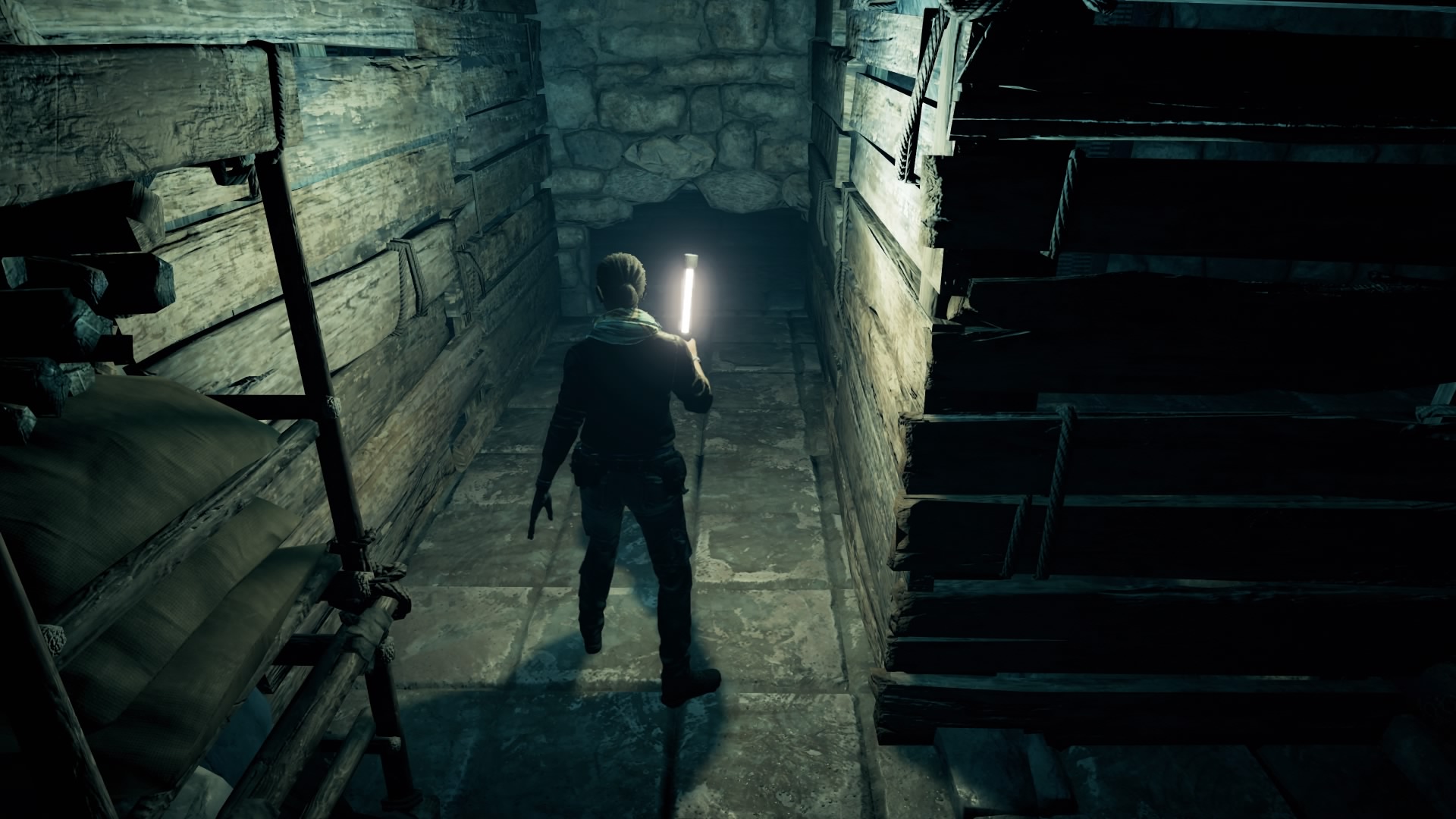 You’ll eventually find the symbol on a sarcophagus in the room at the end of the hall. 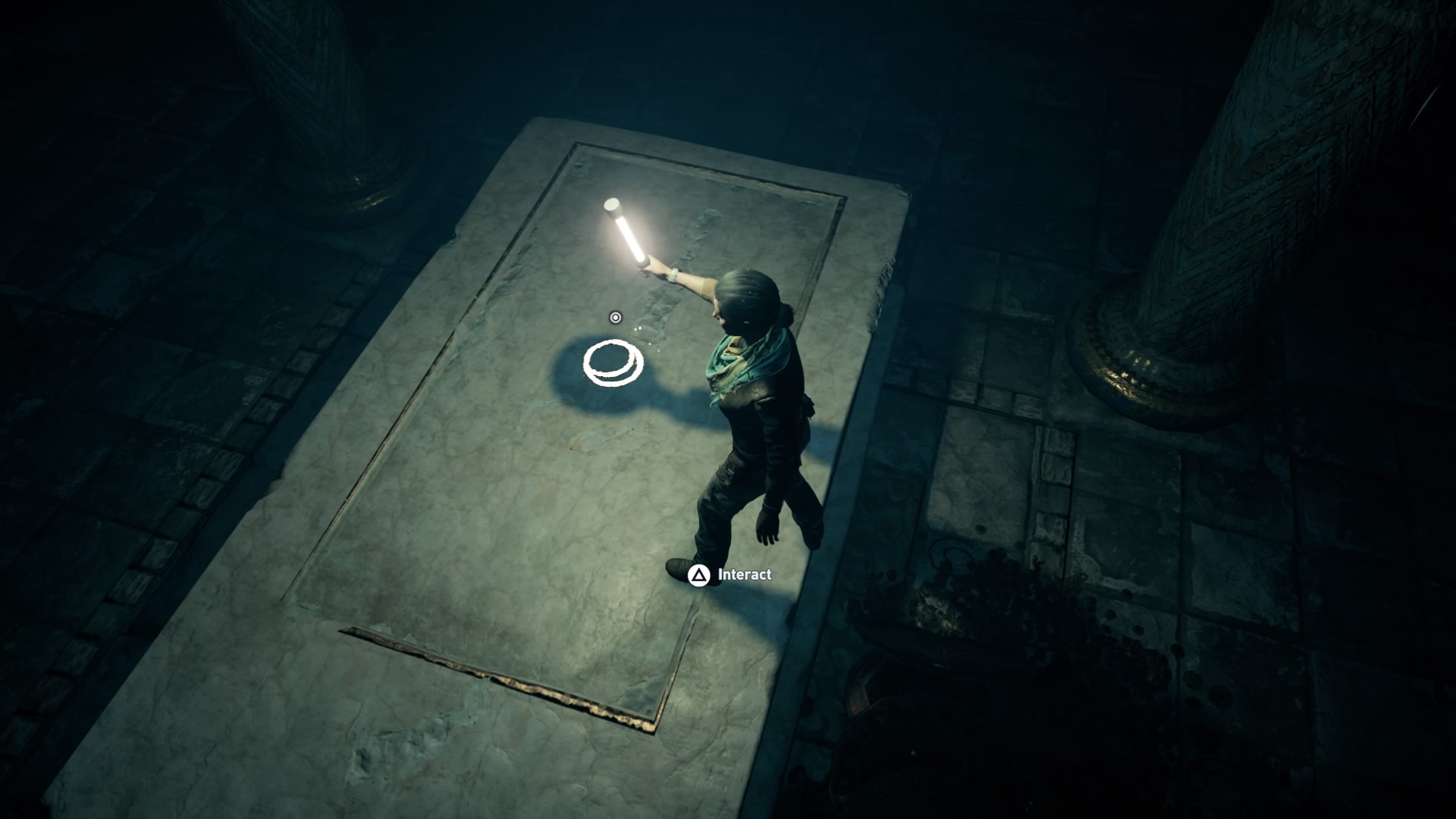 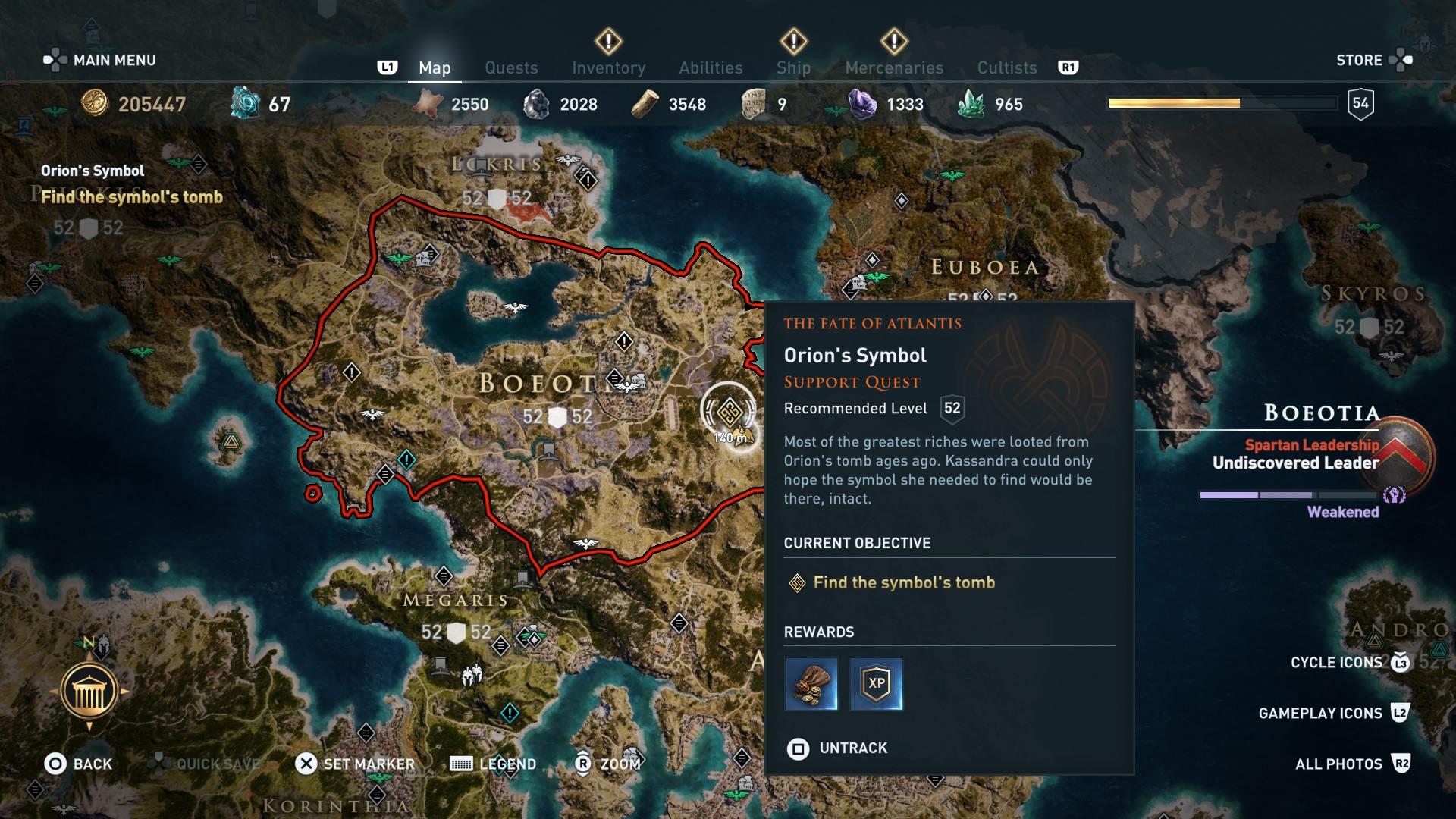 Again, speak to Aletheia a final time, and switch to Layla.

When you gain control go right and head down the stairs. Hop over the debris and follow the corridor around – avoiding floor traps.

Go right at the end of the corridor, then straight across the big floor trap in the next room.

Now head left up the stairs, then follow the corridor around. Keep an eye out and slide under the gap in the wall on your left, then go right up the stairs on the other side. 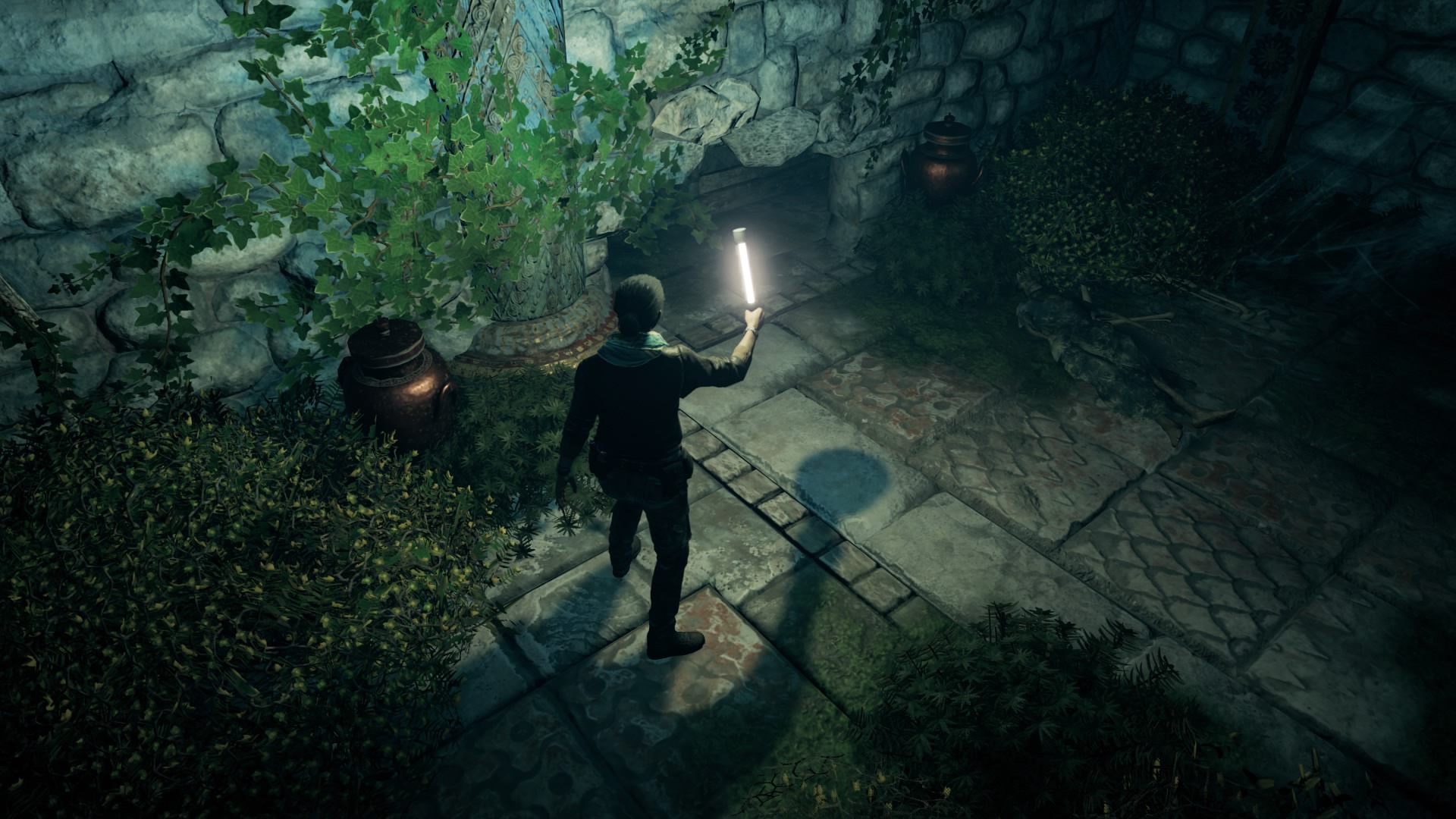 Then go right again, and you’ll find the last symbol on the far side of room. 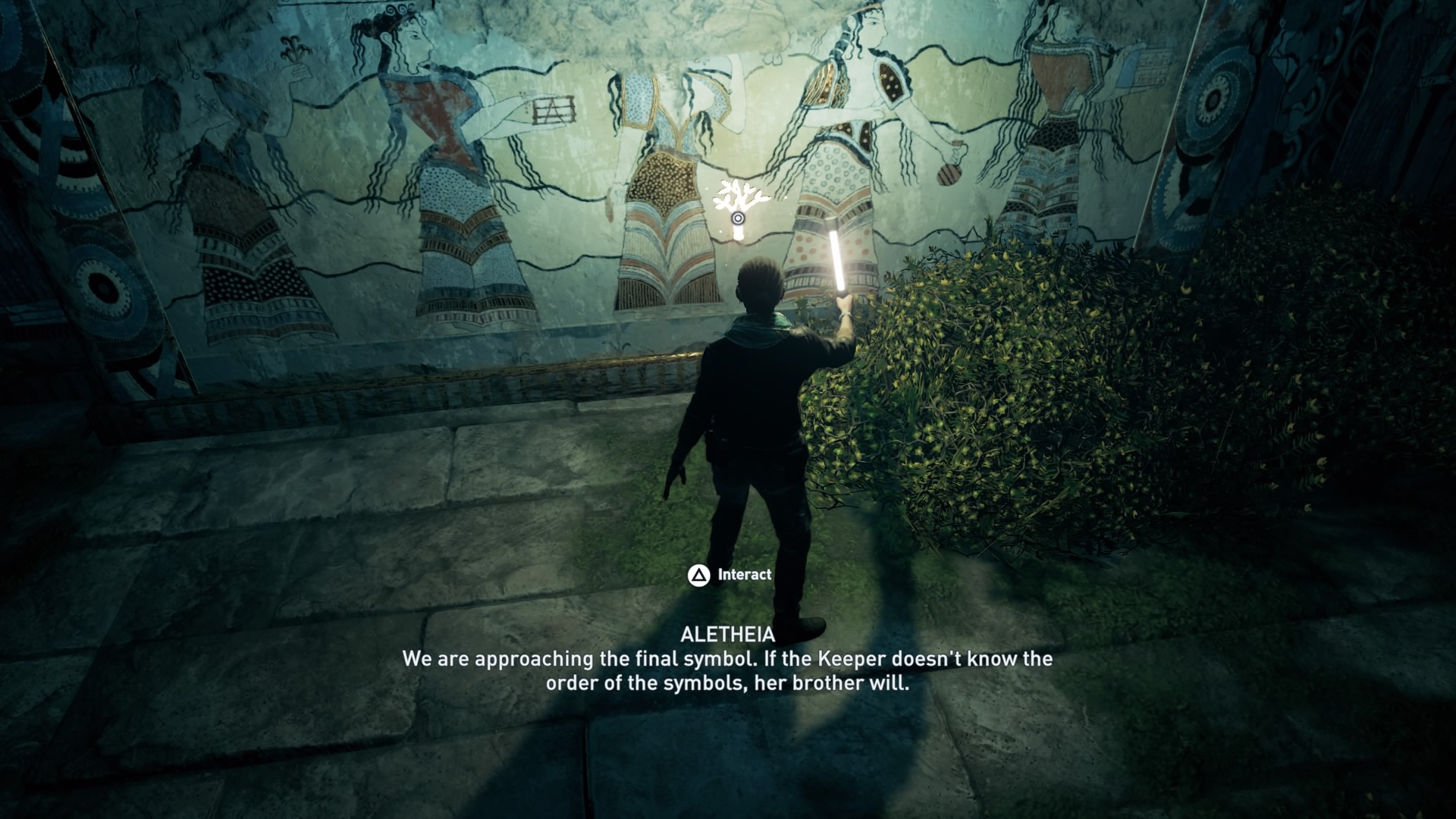 Finding all three symbols triggers another cutscene, and eventually you’ll have to enter Deimos’ memories to find out the order the symbols need to go in. 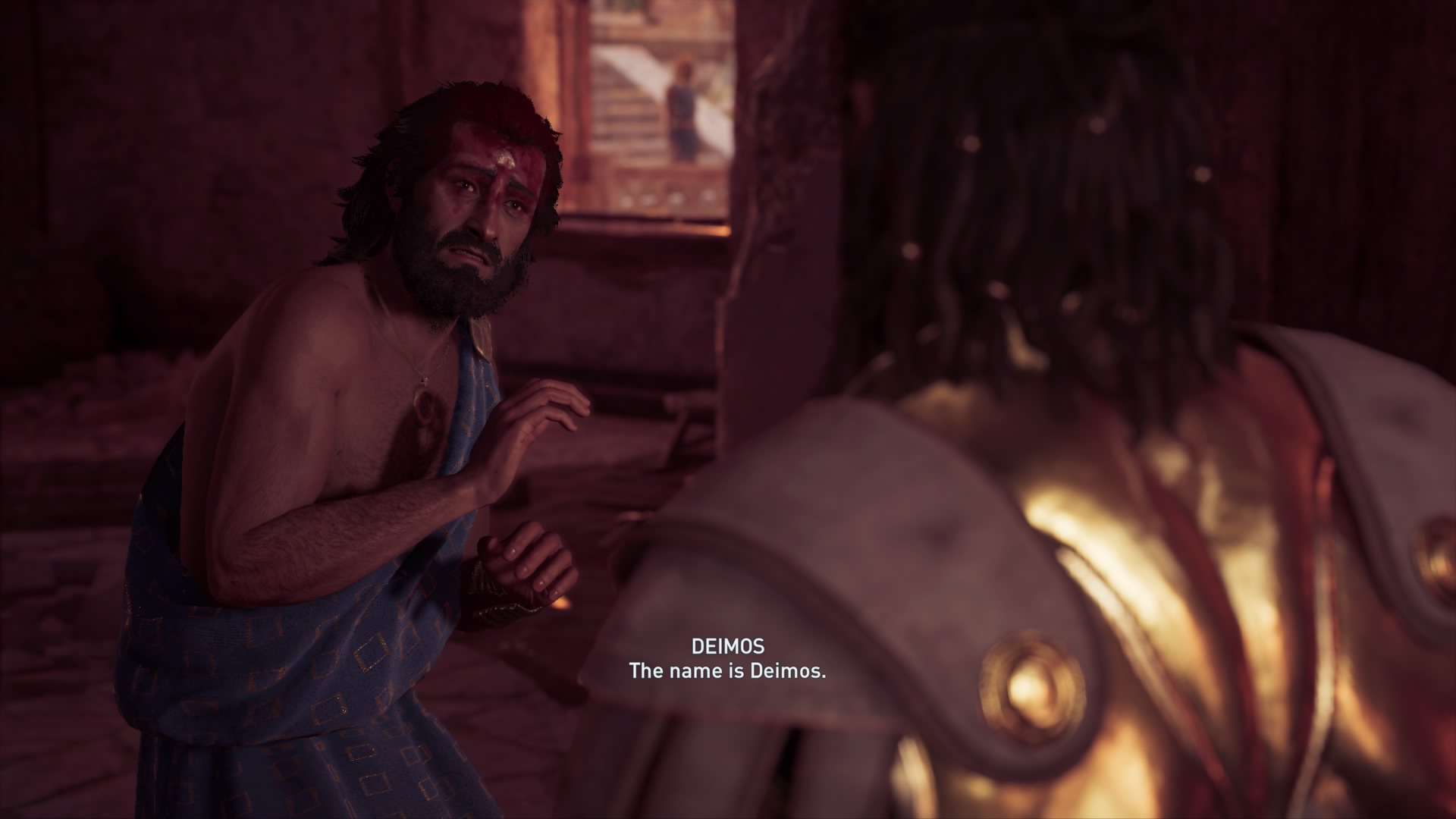 During this brutal scene you can resist Deimos’ violent tendencies, but you’ll have to do submit eventually.

You’ll learn that the order you need to enter the symbols is: Itira, Korgath, Metin. 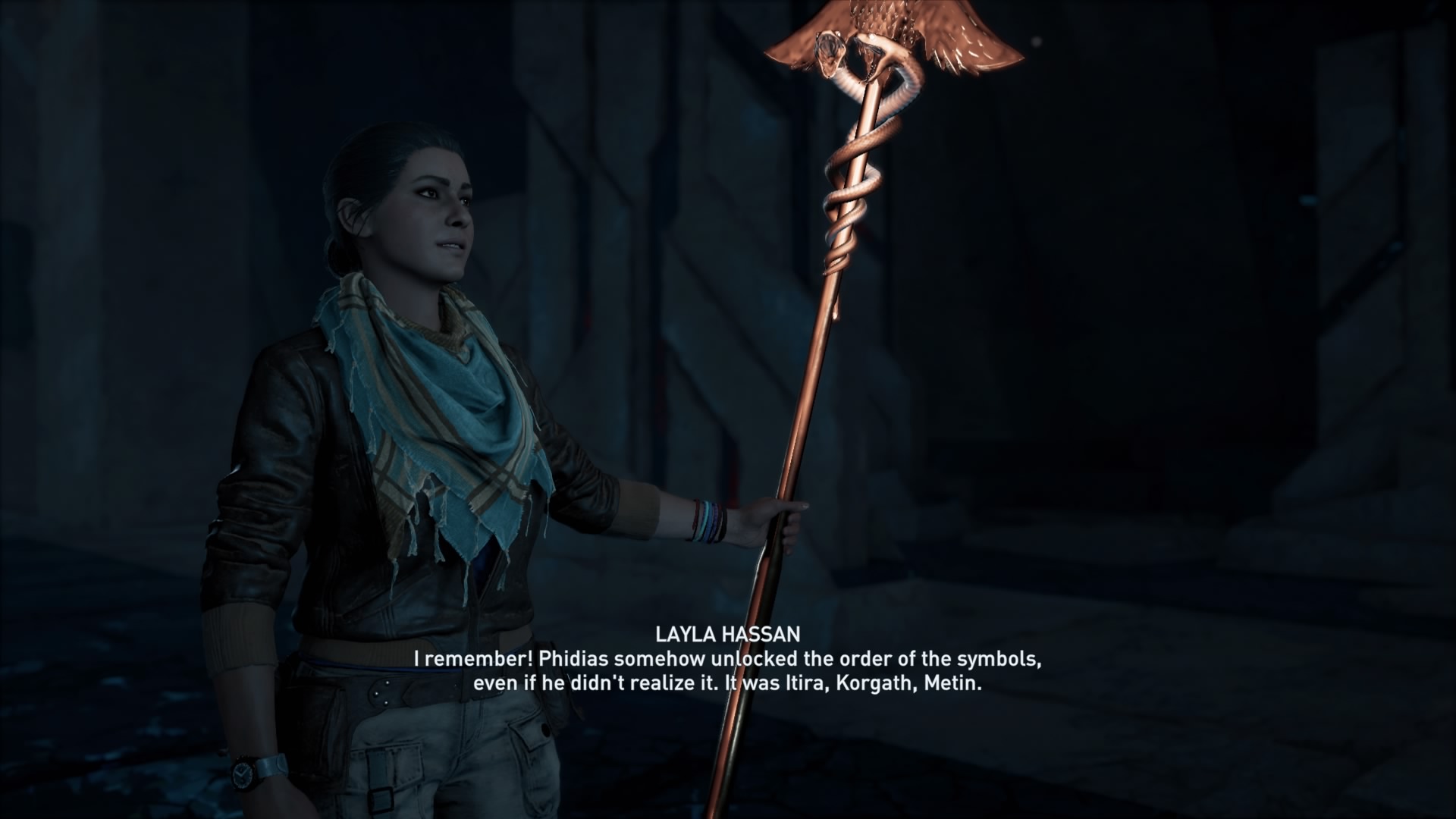 When you regain control as Layla, run over to the gate to automatically trigger a cutscene.

Enter the symbols in the Itira, Korgath, Metin order, and you’ll complete the quest!

This part of your journey ends here, but you’re told to “look out for Fate of Atlantis” – the next part of Assassin’s Creed Odyssey’s DLC, which is coming soon.