The latest The Division 2 update introduced three new gear sets for you to find, so let’s take a look at where you can get them all and what bonuses they provide.

Gear sets grant unique bonuses when two or more are equipped. You’ll need to fulfil certain requirements before you can get your hands on some of them, which we’ve detailed below.

In order to use the sets, you must be at least World Tier 4 and can access the Tidal Basin Stronghold.

There are six pieces to collect for each set, so head to the Project tab to find the missions and activities linked to them.

Once you’ve completed Tidal Basin and have unlocked World Tier 5, you’ll have a new Project to complete called the Hard Wired Prototype Project. You must complete a series of missions in order to unlock different Hard Wired components.

Each component is tied to a blueprint and you’re looking for six in total. The list which details the six missions match up with the six components you need to find. Once you’ve collected all the components and donated them for the Project, you’ll then receive six blueprints.

You’ll have to go and find more components and Hard Wired tech in order to craft the blueprints which are dropped by Black Tusk enemies. It’s a bit of a grind, but well worth it.

As for what bonuses you get, we’ve listed them down below:

If you wear all six pieces, you’ll get the Feedback Loop bonus. With this bonus, killing with a skill resets the cooldown of your other skill.

Repairing a friendly agent’s armour from zero also resets the cooldown of your skills, and both of these bonuses can be used once every 15 seconds. When a skill cooldown ends or reaches full charge, you’ll gain bonus damage and repair to all skills for 15 seconds.

The Hard Wired gear set is by far the most challenging to find and could prove useful in the upcoming raid. 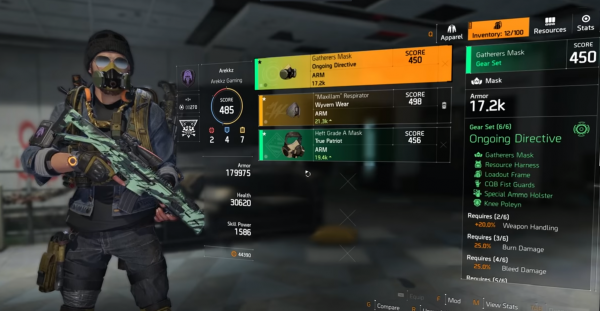 There are six pieces in the Ongoing Directive gear set and you’ll get unique bonuses if you wear two or more pieces.

Wearing all six pieces will unlock The Right Tool bonus. Killing an enemy with a weapon grants some special ammo, like Incendiary or Shock ammo, to one of your other weapons. 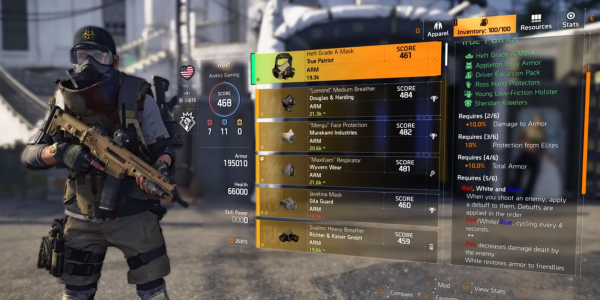 Arguably the coolest looking set of the three, the True Patriot set is also comprised of six pieces that you need to collect to unlock bonuses.

Wearing 6 pieces will grant you the Full Flag bonus. When you shoot an enemy that has all three debuffs applied, you’ll deal 25% damage to nearby enemies that have at least one of the debuffs.

Want more? Check out our The Division 2 guide page to see how to get The Chatterbox SMG, the best skills available and how to reach level 30 fast.