Though it’s a semi-shameless spin-off, Ubi’s latest can be a tough customer unless you go in with the right strategy. Survive with our help.

Once you’ve read our Far Cry New Dawn review, you’ll be wanting some tips on how to survive Ubisoft’s apocalyptic shooter in style. Below, we’ll tell you what perks to unlock, which guns to craft, and how to liberate enemy outposts in the most efficient manner possible. Heed our advice and doomsday delight is guaranteed.

We also have a guide to The Prophecy Puzzle: how to align the Eden’s Gate amulet and a super-quick method to finding the best gun in Far Cry New Dawn. 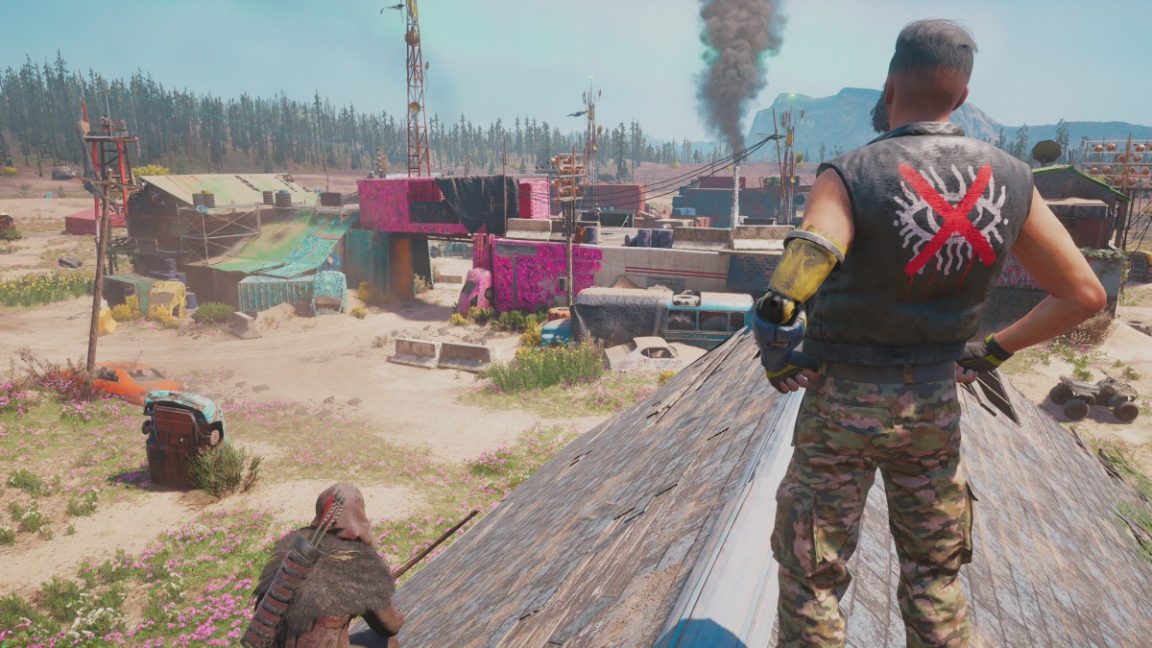 Outposts are ethanol: that’s the most important lesson you can learn in New Dawn. Far Cry’s enemy strongholds have been the heart of the series ever since 2012’s Rook Islands reboot, and they play a more important role than ever in this post-apocalyptic spin-off. Capture one, and you fill your pockets with the resource that powers the game’s central base-management.

Each outpost can be captured multiple times, and when you take control of one, you have the choice of either immediately mining it for ethanol and resetting the base to a higher difficulty, or maintaining control, so that you can fast travel back to the encampment.

The wisest move? Replay the outpost on a higher difficulty. Provided you have the right arsenal – which we give tips on below – you can earn hundreds of ethanol supplies with a couple of successful stronghold captures. Take these forts without alerting attention, and you receive bonus supplies for going undetected. 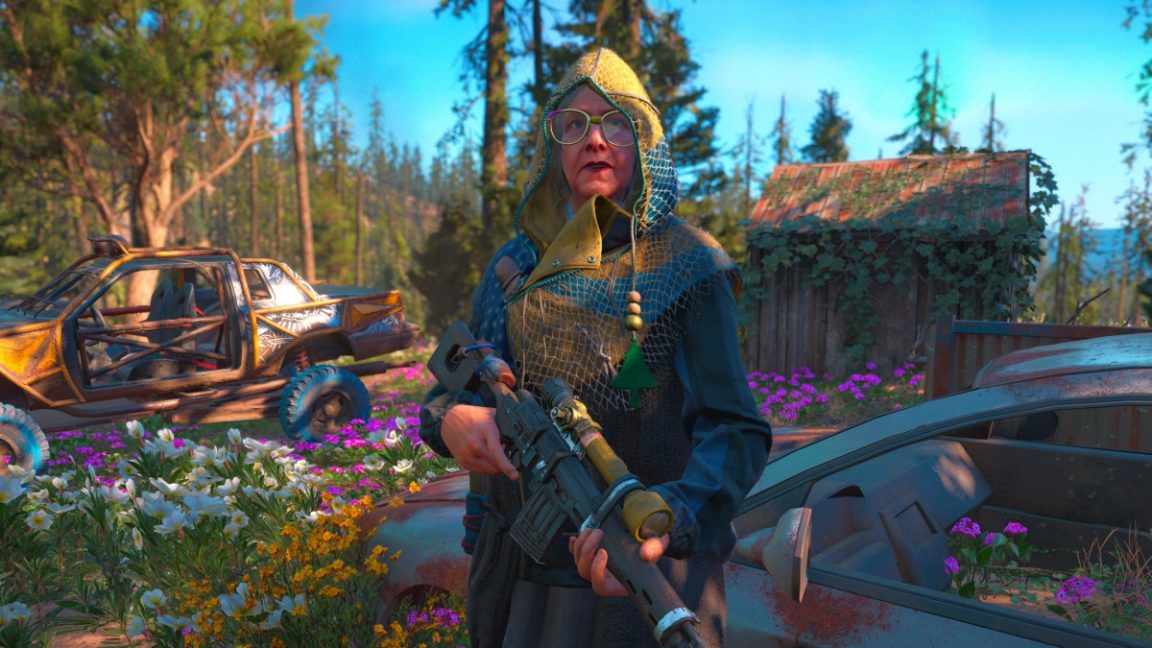 The most useful Specialist in the game just happens to be an eagle-eyed pensioner. This elderly sniper can be recruited as soon as you finish New Dawn’s tutorial, and her long-range sniping skills make her the perfect pal for liberating outposts undetected.

The more kills Nana bags, the more useful she becomes. Once she offs 15 dudes, she can see through smoke. By the time she bags her 40th target, the old dame can shoot through cover. Her silenced scope makes her an ideal covert assassin, and provided you keep levelling up the training camp back at Prosperity, she can eliminate even Elite level enemies. 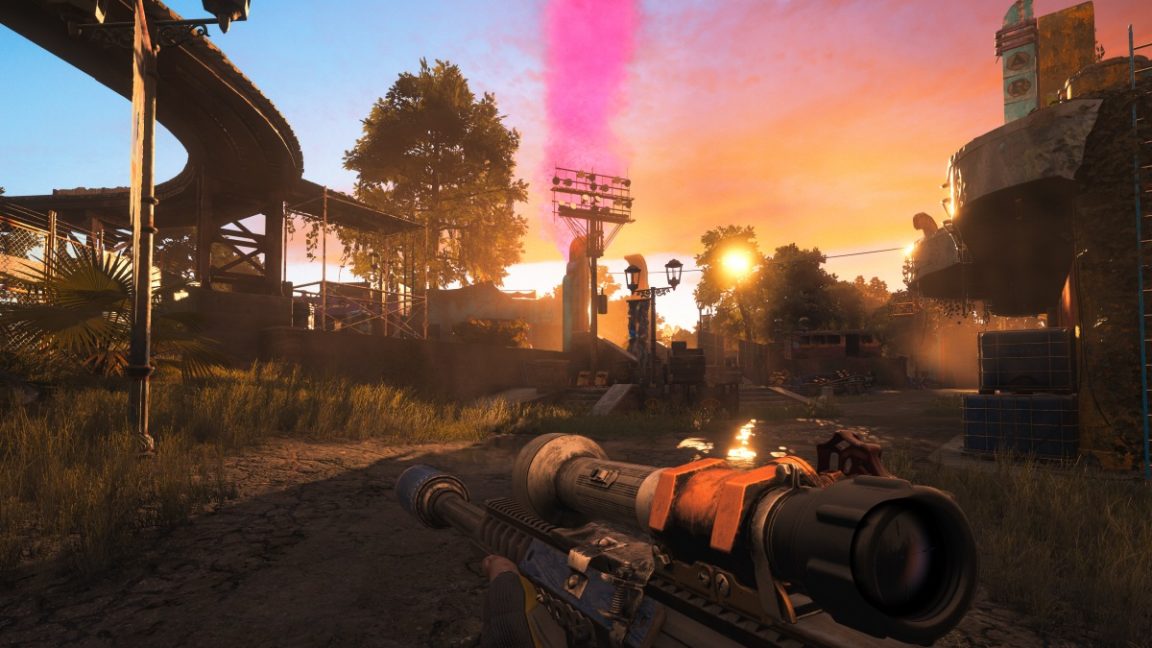 In terms of time commitment vs reward, Expeditions are the most lucrative excursions in New Dawn. These valuable-grabbing missions can usually be completed in less than ten minutes, and if you get out alive, you’ll earn a hefty supply of copper, titanium, tape, gears, and circuit boards; all of which can be used to upgrade weapons and other areas of your camp.

Whether you’re storming the H.M.S. MacCoubrey, or sneaking through Five Star Theme Park, stealth is always the best option when it comes to Expeditions. Keep your head low, tag enemies well ahead of time, and only go loud once you’ve secured the package, which can always be found near the pink flumes of smoke, and you’ll come out rich and smiling. 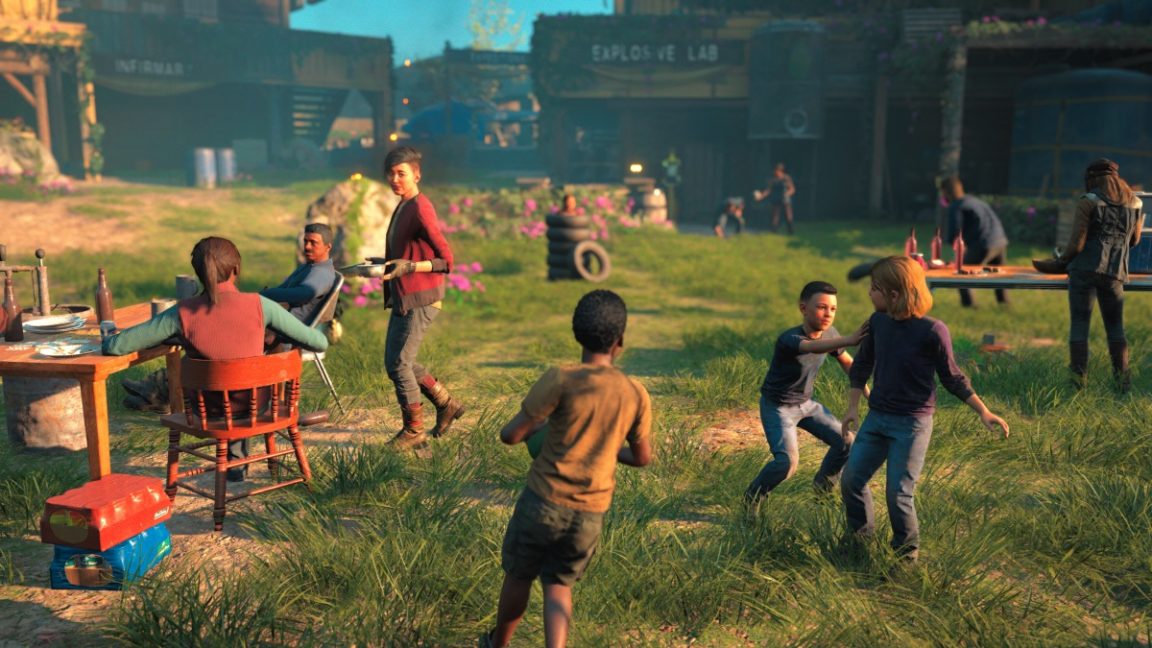 Give Prosperity some love

Almost every action you take in New Dawn is affected by Prosperity. Upgrading your base camp is crucial to unlocking better vehicles and weapons, as well as improving the stats of your Specialist buddies.

Make sure you regularly take outposts to keep the ethanol flooding in, as this resource is the lifeblood that keeps Prosperity… well, prosperous. Focus on upgrading the weapons workbench as soon as you can, then give some love to the Expeditions facility and the garage. The quicker you can craft a helicopter, the sooner you can get from A to B on the expansive map with ease. 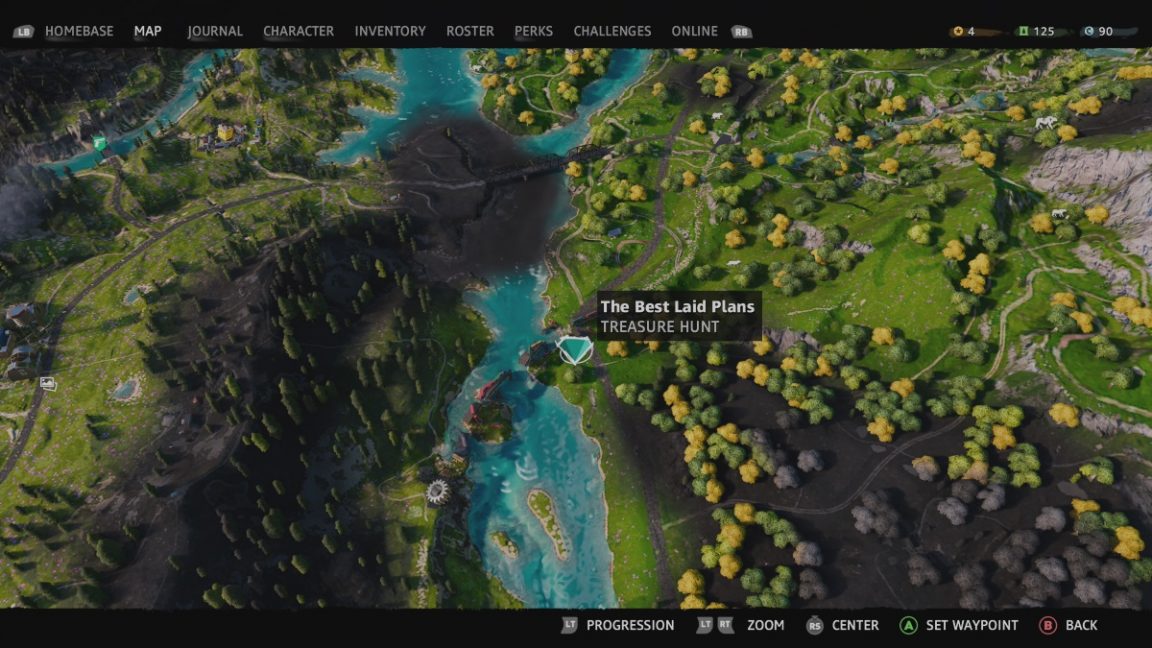 As you explore the doomsday surroundings of Hope County, you’ll occasionally bump into NPCs with little green diamonds floating above their heads. These quest-givers will lead you to treasure hunts, which in turn reward a heap of resources should you solve them.

Most hunts revolve around simple environmental puzzles, and provided you scope the nearby terrain, you shouldn’t have too much trouble solving them. Example? One treasure hunt involves opening an underground bunker by finding a back door entrance, then shooting a series of cardboard targets that are blocking the gears of a door puzzle. Invest ten or so minutes into these conundrums, and you’ll be handsomely rewarded. 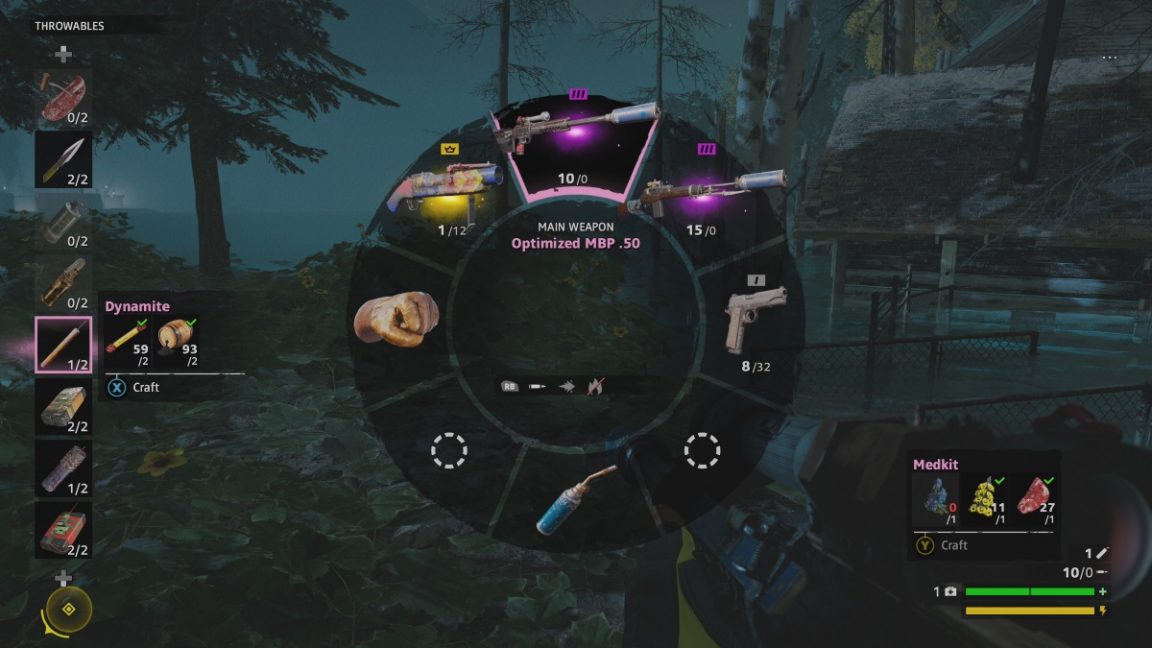 Fight the Highwaymen with a balanced arsenal

The best way to approach firefights in New Dawn is with an armoury that can meet all eventualities. While the Saw Launcher stealth approach is great for liberating outposts in sneaky style, the quietest weapons are often too cumbersome when the shooty shit hits the fan.

Once you unlock the ability to hold four guns at once, make sure your arsenal is balanced. Ideally, you want a sniper rifle, pistol, shotgun, and either an RPG or grenade launcher for those times you need to make the bad guys go kaboom. Grenade launchers are especially useful, though annoyingly, the first one doesn’t become available until weapon rank three. In the meantime, make sure you take a rocket launcher into Highwaymen skirmishes. 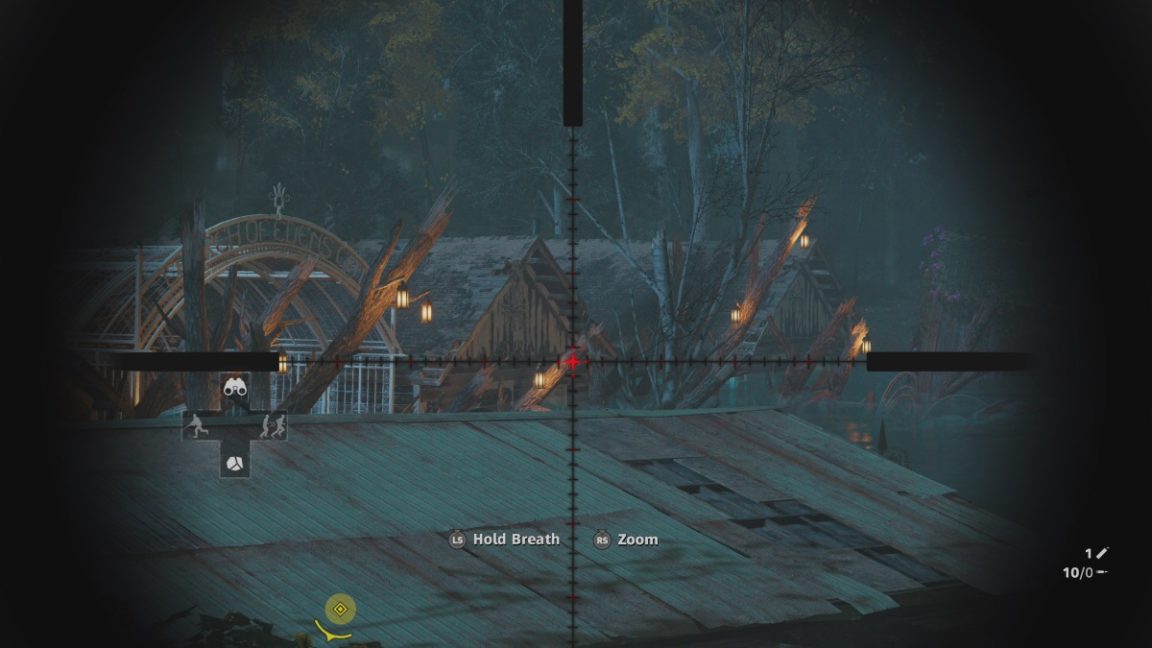 If you want to capture an outpost undetected and without raising any alarms, a silenced sniper is the best pal your mute captain will ever have. To ensure your long-range killing tool comes equipped with a silencer, you first have to upgrade the weapons workbench back at Prosperity. The first silenced rifle is found among the second tier of ranged weapons, and should be your go-to gun once you acquire enough ethanol.

Once you upgrade the bench to the point you can craft rank three weapons and beyond, go for the MBP .50. This brute of a sniper has two tiers of magnification, and providing you load it with armour piercing rounds, it’s powerful enough to take down even an Elite Enforcer with a single headshot. 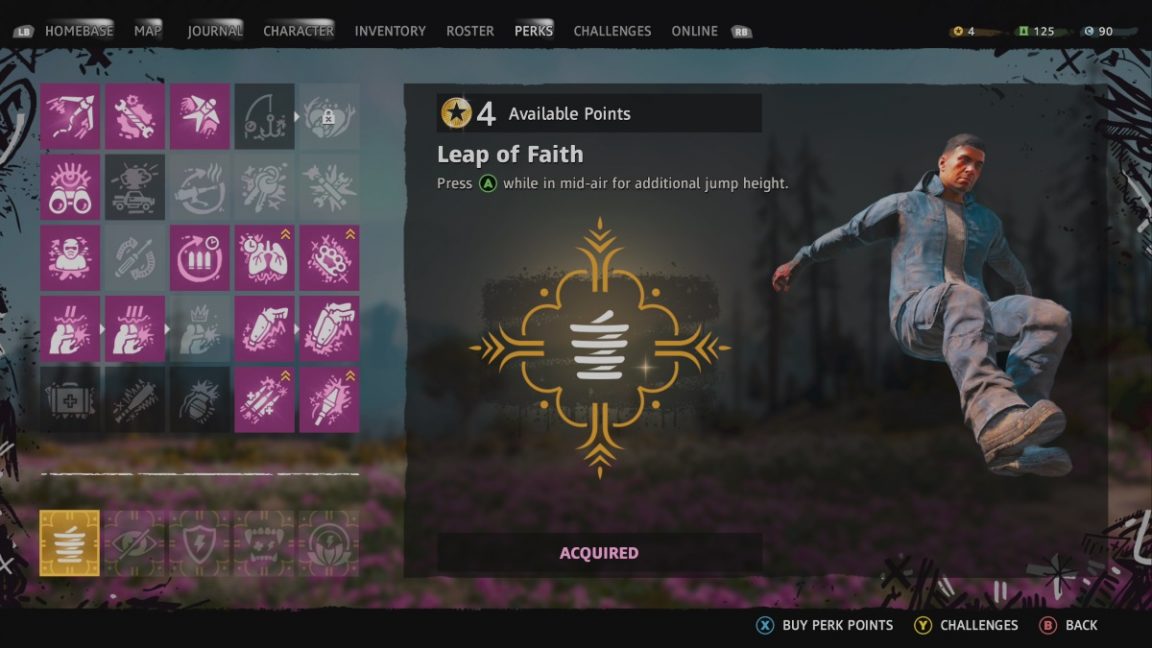 As long as you hunt plenty of animals, and secure kills using a variety of guns, you’ll quickly rack up a whole mess of perk points. Not all perks are created equal, though. While being able to disable booby-traps on Highwaymen vehicles with the Hotwire ability is neat and all, it’s nowhere near as useful as being able to carry a third weapon.

Once you start amassing perk points, your first priority should be to increase your holster capacity. Well-Armed and Heavily Armed should be two of the first perks you unlock. After that, buy the Tactical Binoculars perk to make tagging outpost enemies a lot easier – yes, New Dawn is stingy enough to make you buy a usually free series staple.

Once you complete a specific story mission about halfway through the campaign, you’ll gain access to Eden’s Gift perks. The most useful of these is a handy double jump, called Leap of Faith. Buy this as soon as you can, and you’ll be springing around Hope County like an irradiated bullfrog.