Starting March 12, you’ll be able to distill your own spirits in Fallout 76.

Appalachia wouldn’t be Appalachia without moonshine, and you’ll soon be able to make it yourself in Fallout 76. And without the Sheriff coming around to smash your still.

As part of the Wild Appalachia update, a brewing and distilling crafting system will become available starting with the quest Wasted on Nukashine.

The quest starts at Vault-Tec University and you’ll eventually make your way to a speakeasy. Here you will meet up with an alcoholic robot named Biv who will teach you to craft Nukashine using the Brewing Station.

The Brewing Station is basically a workbench you’ll use to make spirits. This workbench can be placed in your C.A.M.P. to create a variety of adult beverages such as beer, cocktails, spirits, and wine. Like the real thing, each will provide a temporary buff as well as a drawback. And yes, hangovers are a possibility.

You’ll find some drinks will need additional time to ferment before consumption. The longer you ferment, the stronger the drink.

During the Wasted on Nukashine quest you will also learn how to craft the Fermenter. Having one at your C.A.M.P. will help speed up the fermentation process.

To give you an idea of what you’ll be brewing, Bethesda provided the following information on each type and a few brands. 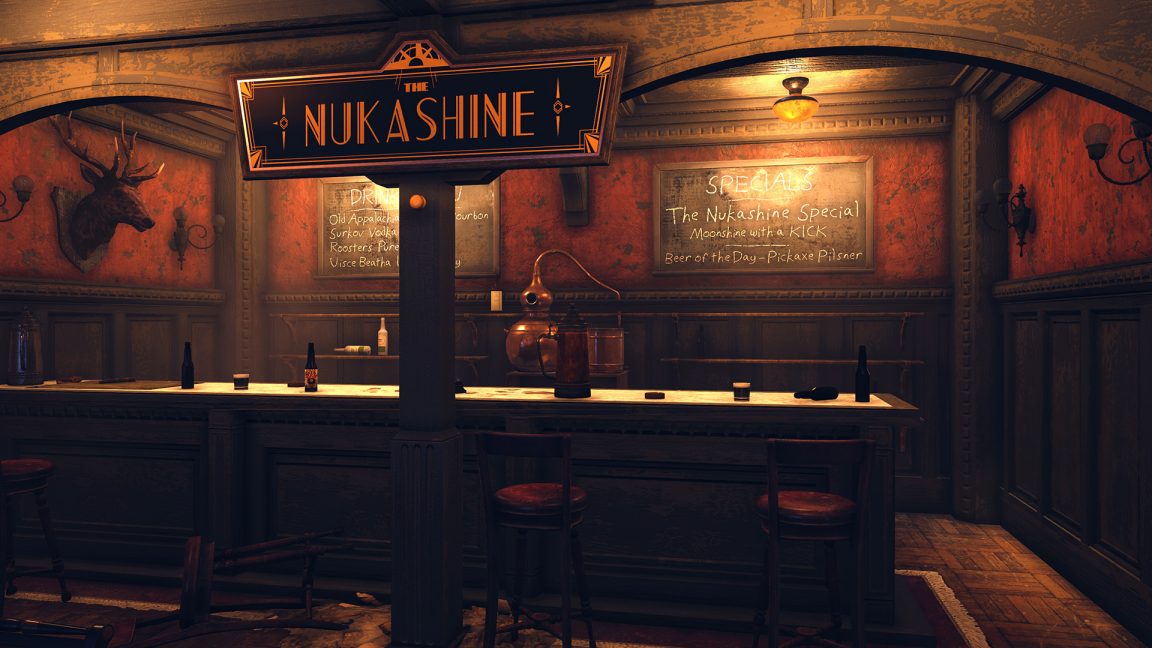 Wines and Spirits require fermentation time to take advantage of their full effects as a fresh beverage. Let them age long enough, and they will change from fresh to vintage, and gain additional, more powerful effects.

Beer requires fermentation, and is best served fresh; therefore, beer will not have a vintage state.

Mixed drinks do not require fermentation and their effects do not change.

Firecracker Whiskey, Hoppy Hunter, and Tick Blood Tequilla Sunrise are just three of the recipes you’ll learn. To learn more, go speak with Biv, and each day he will give you one of two new repeatable daily quests at random.

The first will teach you new recipes every time you complete it, and the second will let you experiment with the effects of various drinks.  More recipes and options will be added in  the future.

Fallout 76 ‘s Wild Appalachia update kicks off March 12, is the first of three seasons planned for 2019.