Back in Sparta, the Misthios must prove themselves to the Kings to win back their childhood home – their first challenge: to win control of the state of Boeotia for their homeland.

In this quest line, the reverberations of previous choices can be felt, as old faces make their reappearance. Here’s how to complete the Conqueror quest in Assassin’s Creed Odyssey, including where to find all four Boeotia champions.

Once you accept this quest, you have to travel to Boeotia to get the lay of the land from the Spartan Polemarch on duty. Granted you didn’t kill him for good back in Megara, you’ll reunite with your half-brother, Stentor – who won’t be pleased to see you.

Talk him down, and he’ll send you out to weaken Boeotia’s resolve by killing their four champions: Drakon, Aristaios, Deianeira, and Nesaia.

One of the more interesting parts of this line is the Last Fight of Aristaios quest. To track down Aristaios, you need to head over Lake Kopais in the centre of Boeotia. In the centre of the lake is an island. On the eastern tip of this island is where you will find Aristaios. 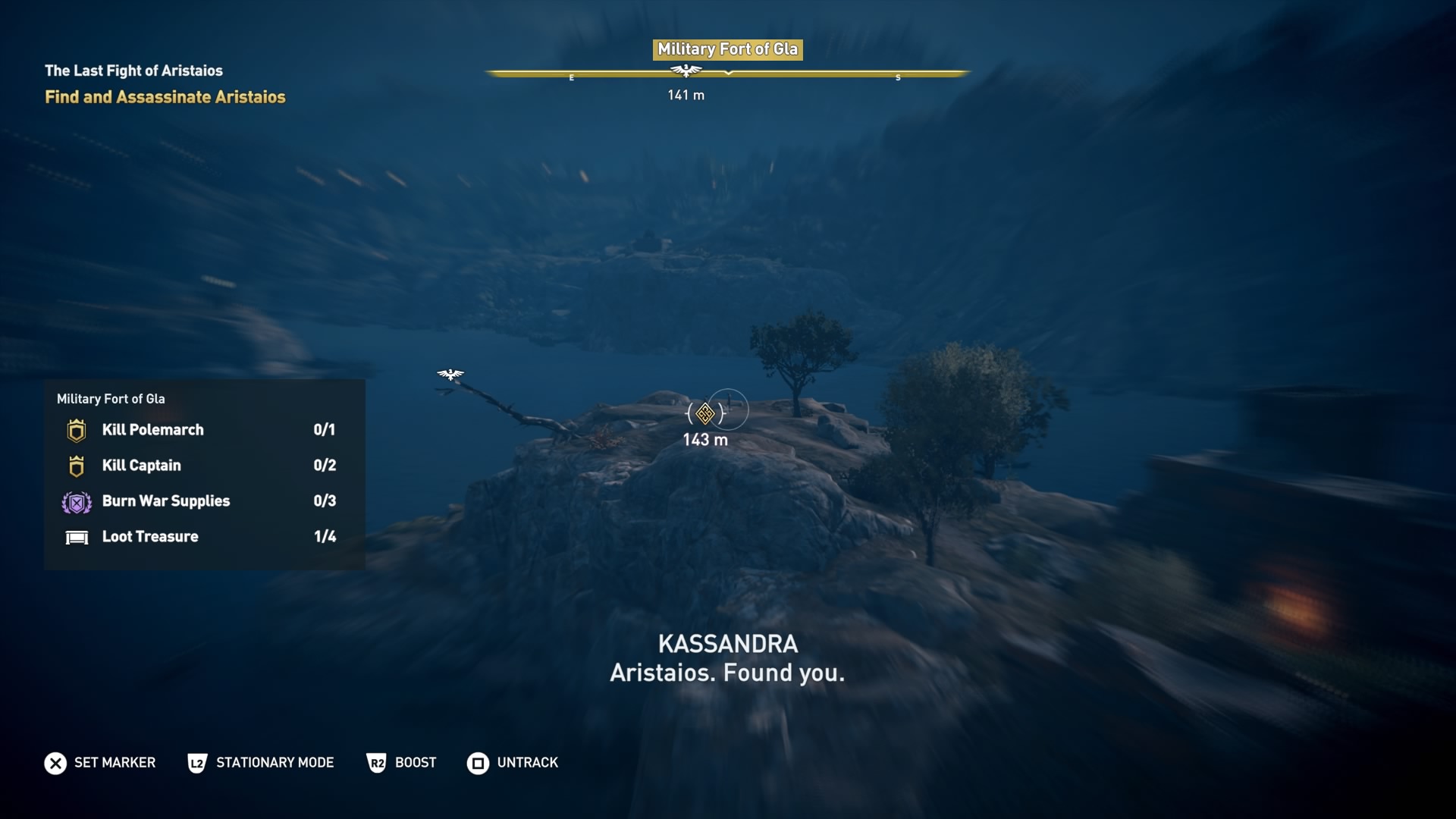 Based on your previous decisions, if you spared The Wolf of Sparta, Nikolaos, at the start of the game, he’ll step in to finish off the champion – no fighting necessary.

If you’re trying to get the “best” ending to Assassin’s Creed Odyssey, when you talk to Nikolaos you need to tell him to “go to” Stendor. Otherwise he’ll stay angry at you and there will be consequences. 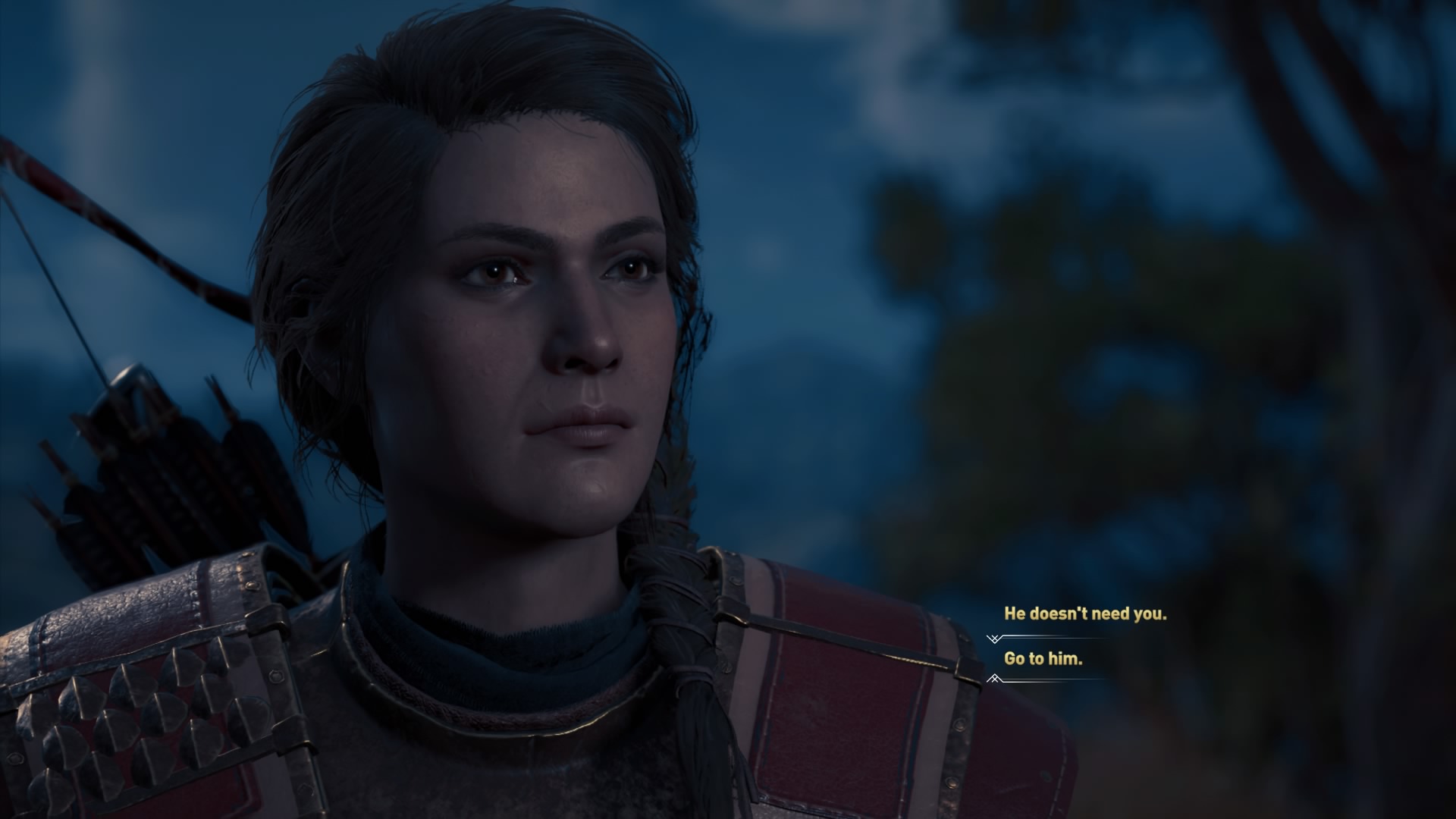 However, if Nikolaos is dead in your game, then he won’t appear and you’ll have to kill Aristaios yourself. Either way, once he’s down, pick up his Epic breastplate and be on your way.

The Fall of Deianeira quest guide

Your second target, Deianeira, isn’t far from your first. Head over to the City of Orchomenos on the western bank of Lake Kopais. In the northeast of the city, you’ll find a side-quest marker on a man called Timon. This quest is called Sibling Revenge. 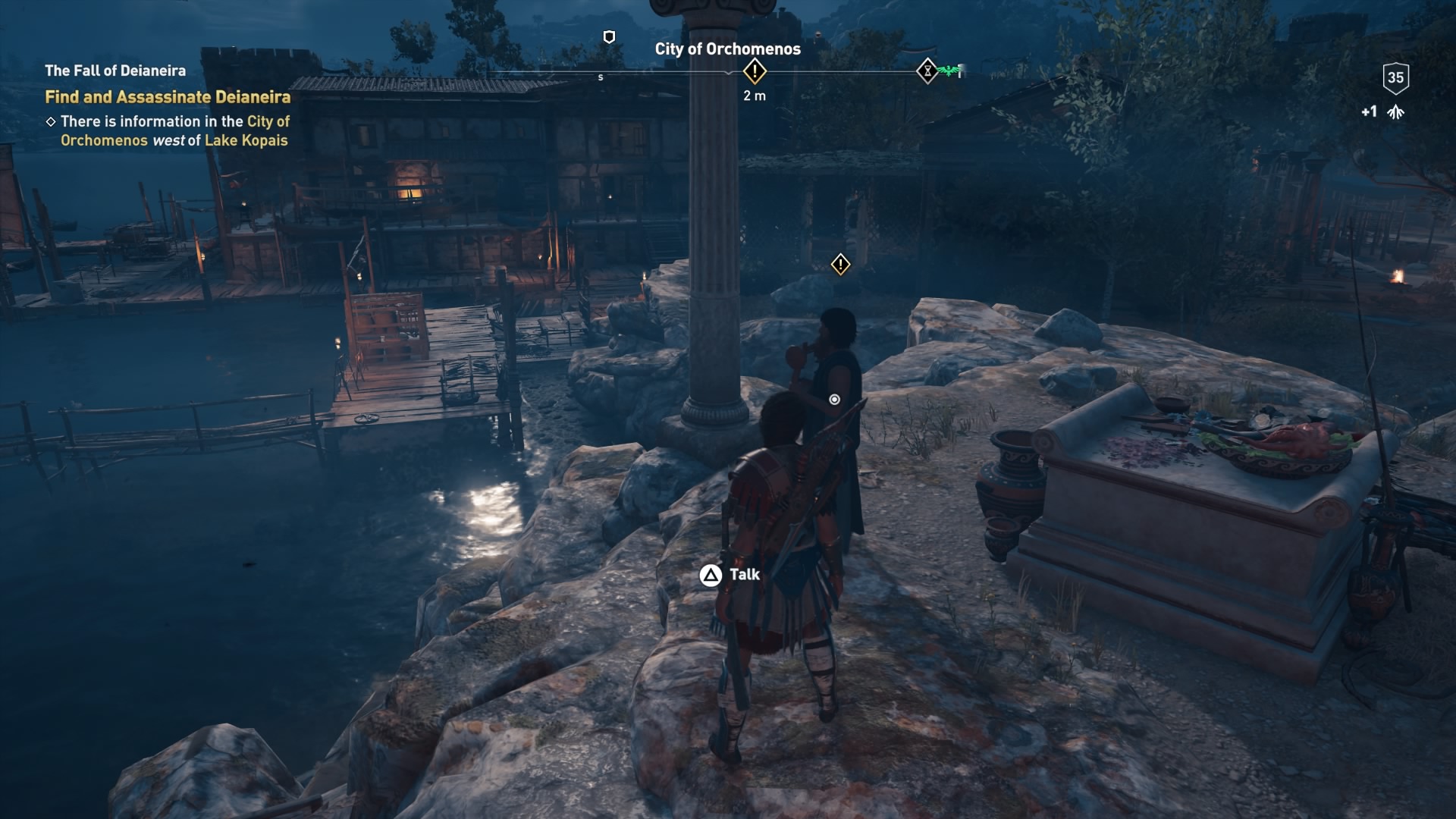 In this quest, you’ll find the location of Deianeira’s sister, Astra. All you need to do is head to Astra’s Training Ground on the northern shore of the lake and take her out. Then return to Timon. Doing so will result in the clue that Deianeira is in the Cave of the Oracle, which is southwest of Lake Kopais. You can also ask Timon to join your crew as a Special Lieutenant. 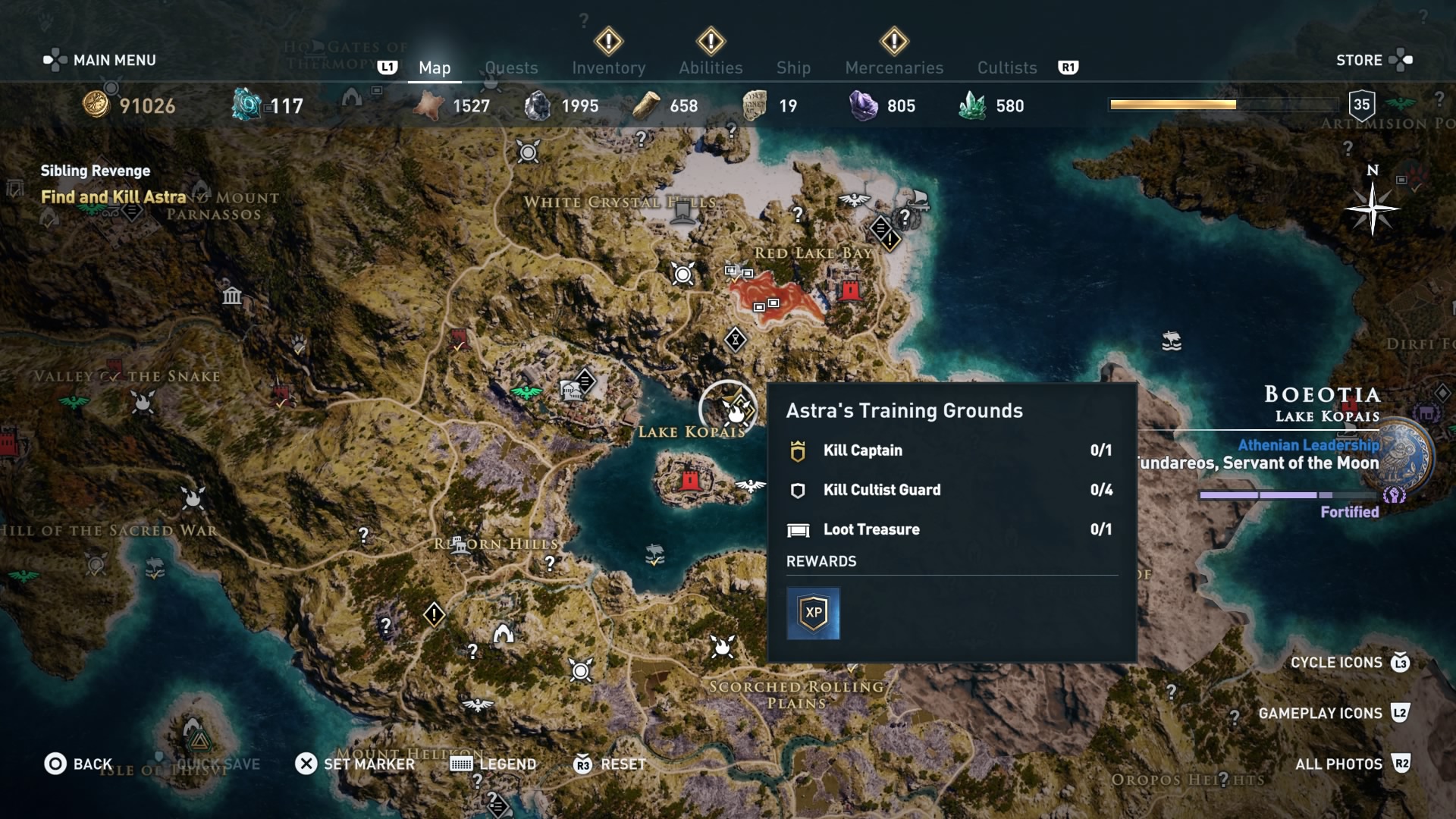 Find the cave on your map and go through the entrance. As you enter, the Misthios will muse on whether the cult is at work here too. 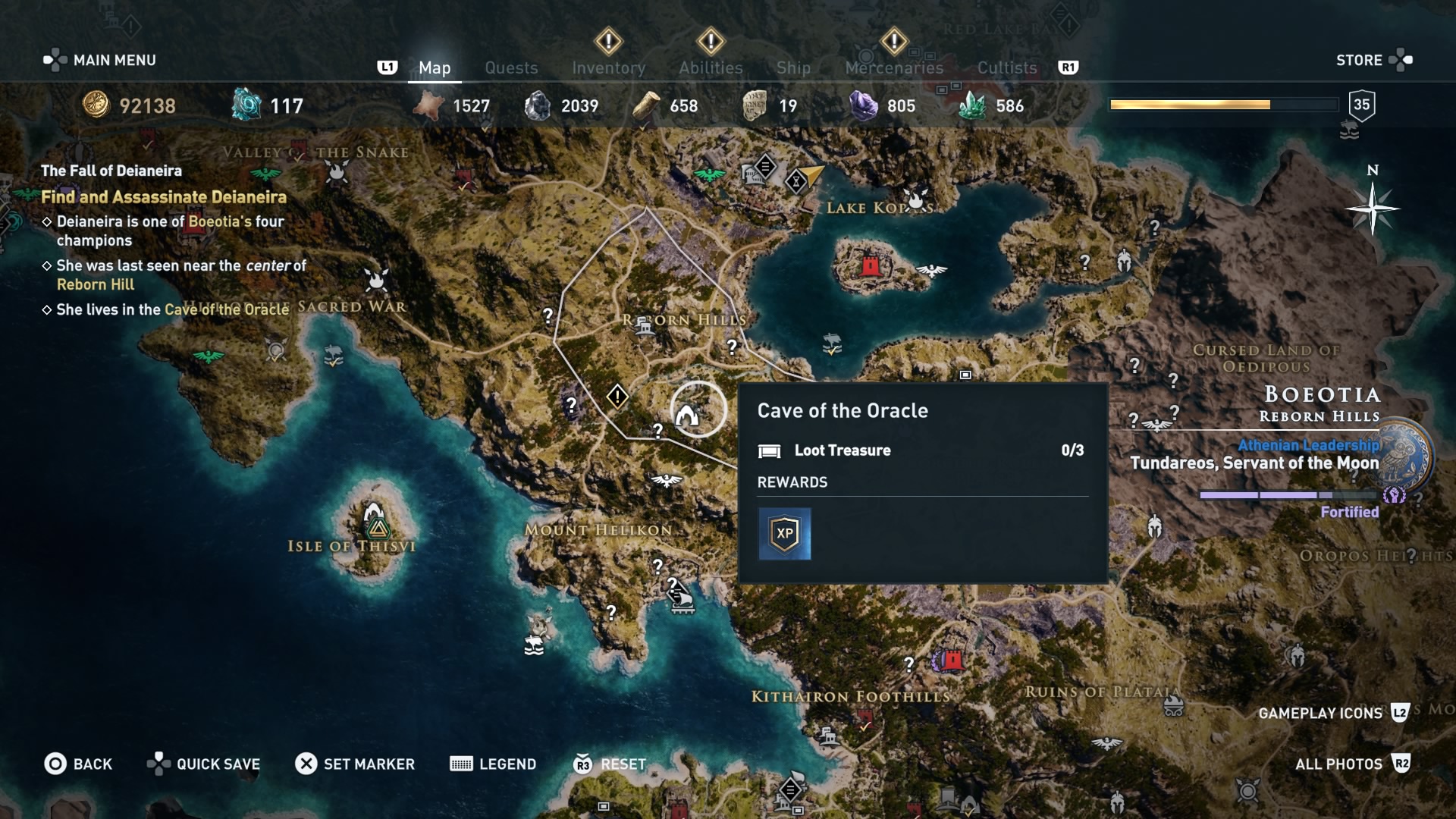 Slide under the gap at the back of the first cave you’re in, then take the left fork and climb across the room with the stalagmites and stalactites. Jump or slide down the next hole, and your suspicions will be confirmed: Deianeira is a cultist. Kill her to complete the quest and claim the Amazon’s Greaves.

The End of Drakon quest guide

This part requires some devious thinking and manipulation on the part of the Misthios. Head to Thebes, which is the built-up area on the map to the southeast of Lake Kopais. On the western side of Thebes you’ll see a side-quest icon called Brewing Love. Here you’ll meet a man scheming to brew a love potion so that he can win the heart of your target Drakon. 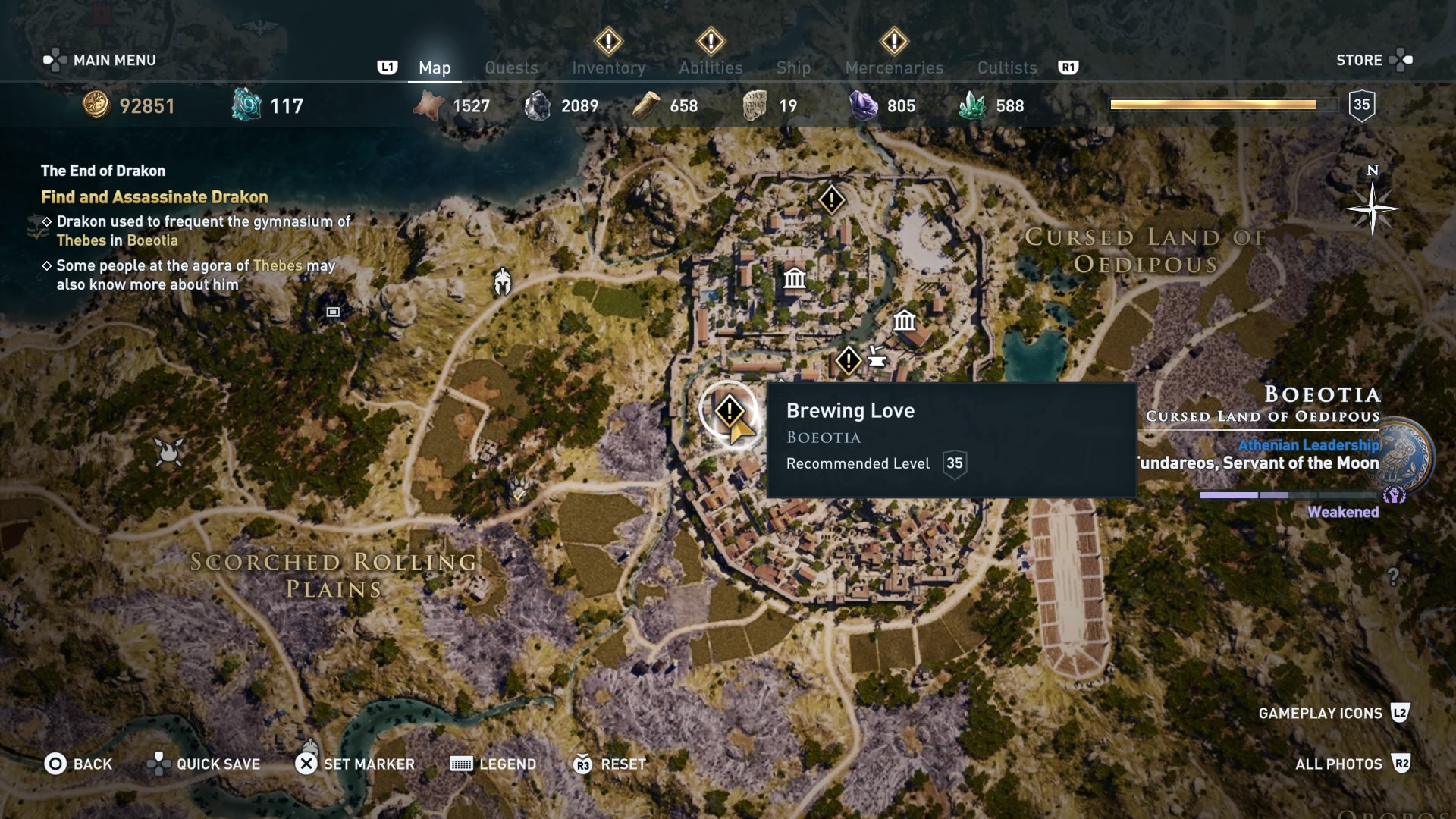 Completing this quest will not only tell you where Drakon is but, because Melanippos will take Drakon’s armour to administer the love potion, will leave him defenceless too.

To the southwest of Thebes you’ll find the farm you need, beset by bandits. Kill the bandits and the farmer will come out to thank you. Pay them 1,000 drachmae for the herbs, then return to Melanippos. 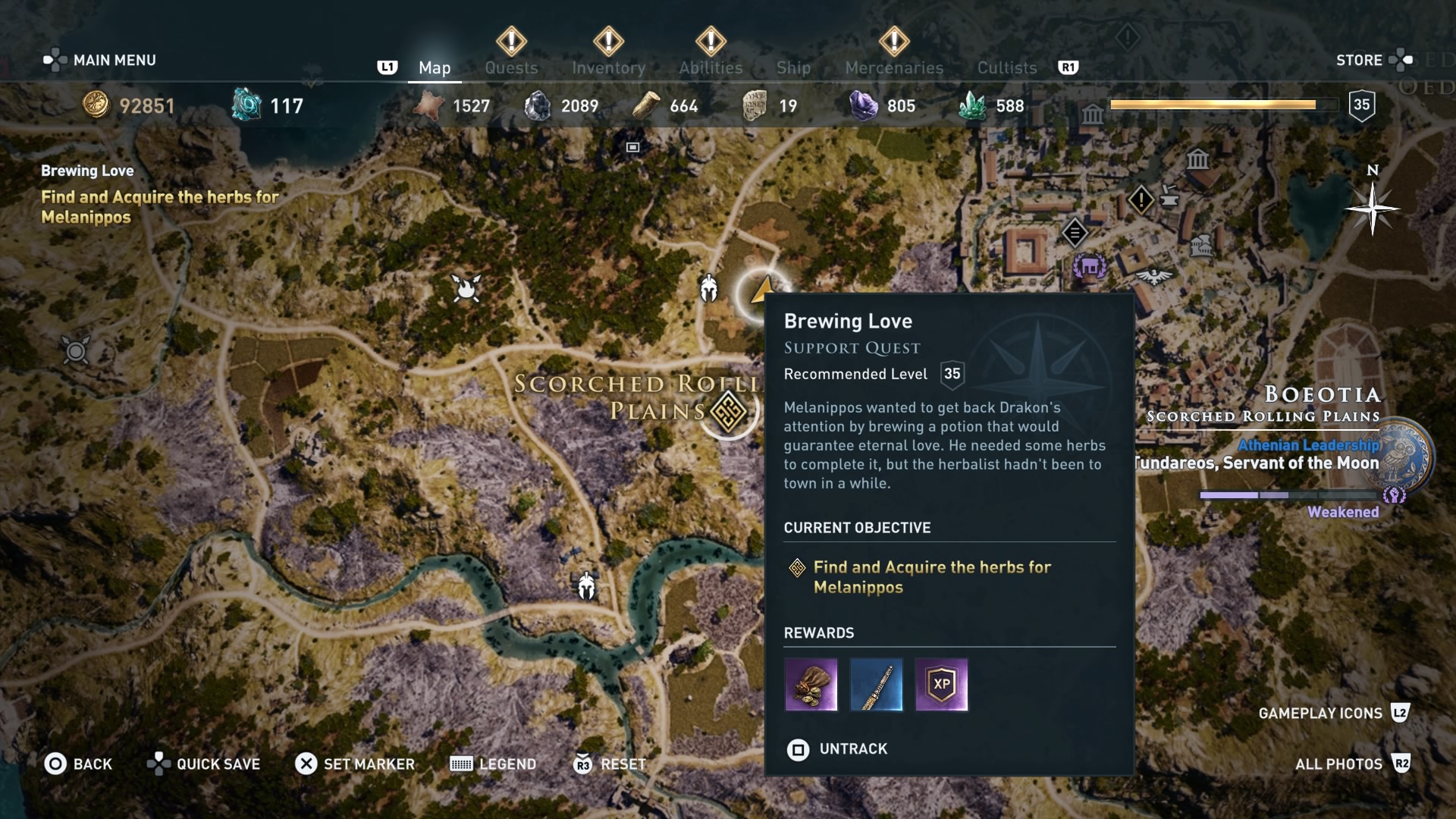 With the ingredients in hand, Melanippos will not only take away Drakon’s armour, but tell you about his training ground too. 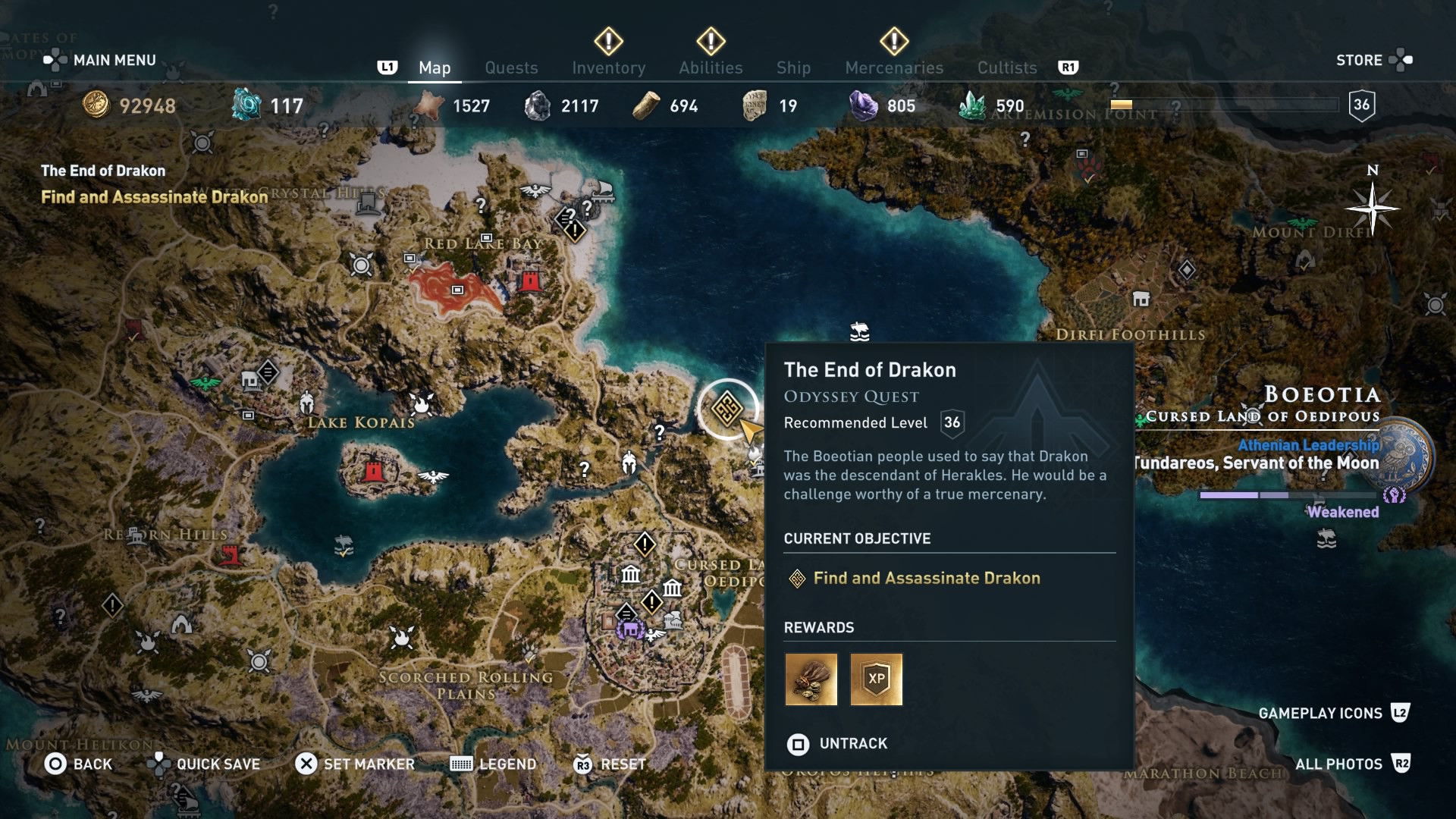 Make your way north of Thebes until you reach the sea. There’s a tributary here, Drakon’s camp is just to the east of it.

Take out Drakon, and you’ll get a pair of bracers.

The final target is the most straightforward. All you have to do is go and find Nesaia’s camp in Boeotia. It’s just to the east Thebes, roughly level with the sports area outside the city walls to the east. 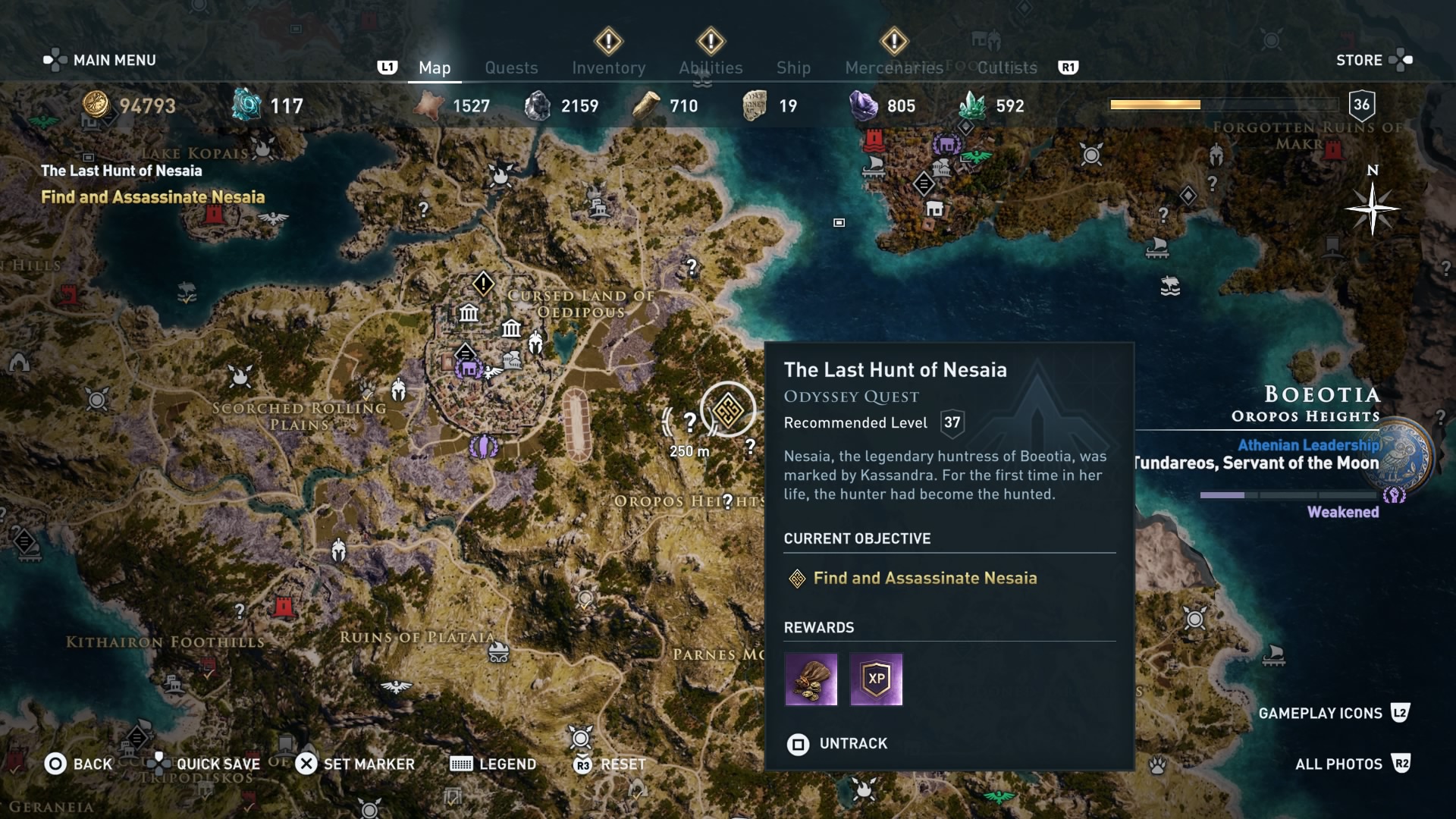 Nesaia is a strong rogue-style fighter that uses poison attacks, but if you’re similar in level it shouldn’t be a problem. 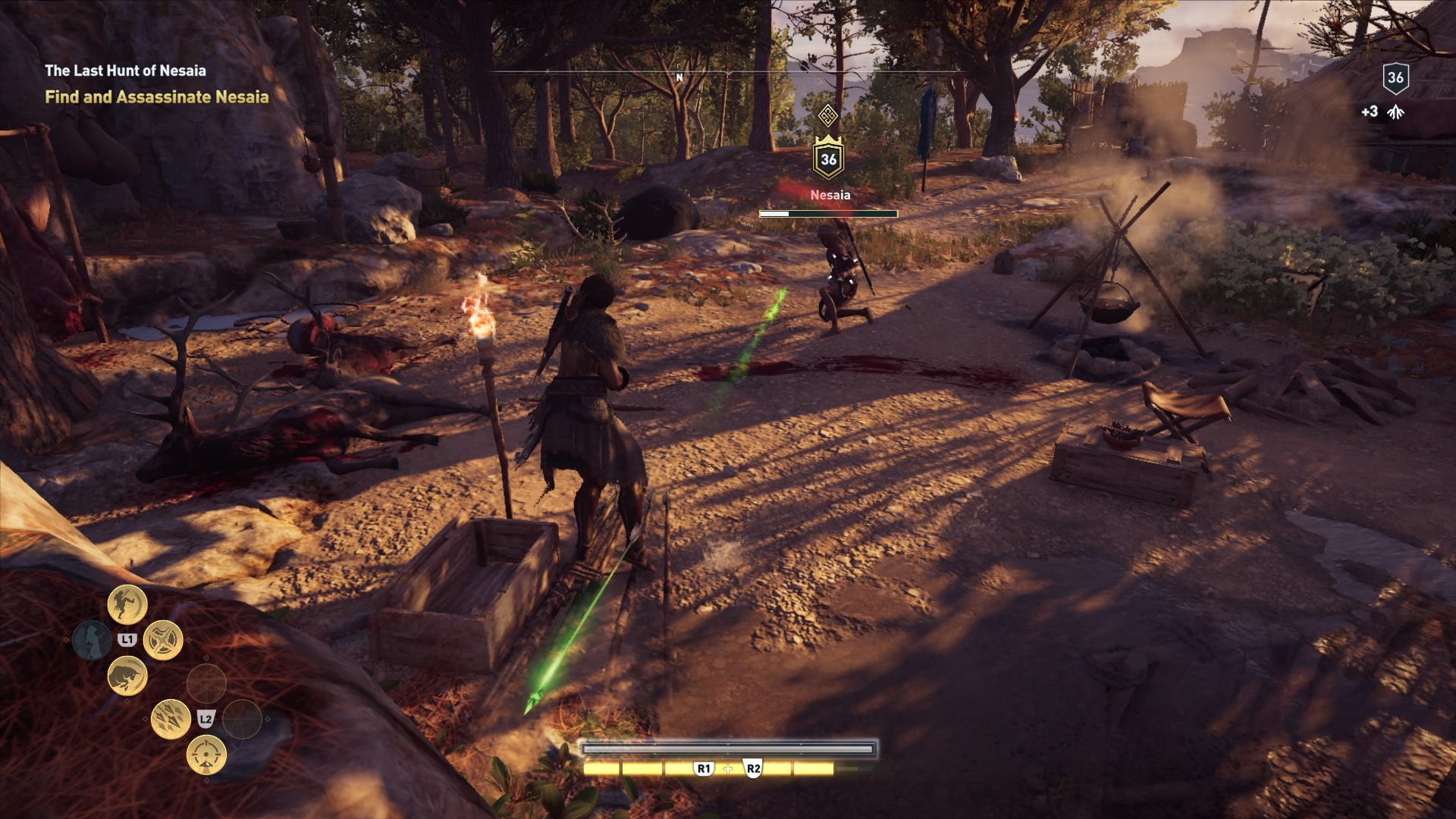 Once she’s dead, claim her belt and return to Stendor (or whoever’s there if you killed him).

Despite your best efforts, he’s still not your biggest fan. However, he agrees it’s time to go to war, and triggers the Boeotia Conquest Battle.

Once you’ve taken the area, based on your actions you’ll speak to Stentor again.

If you convinced Nikolaos to step in during your meeting with him, he’ll enter the fray to smooth things over. If you didn’t, then you and Stentor will have to fight to the death. 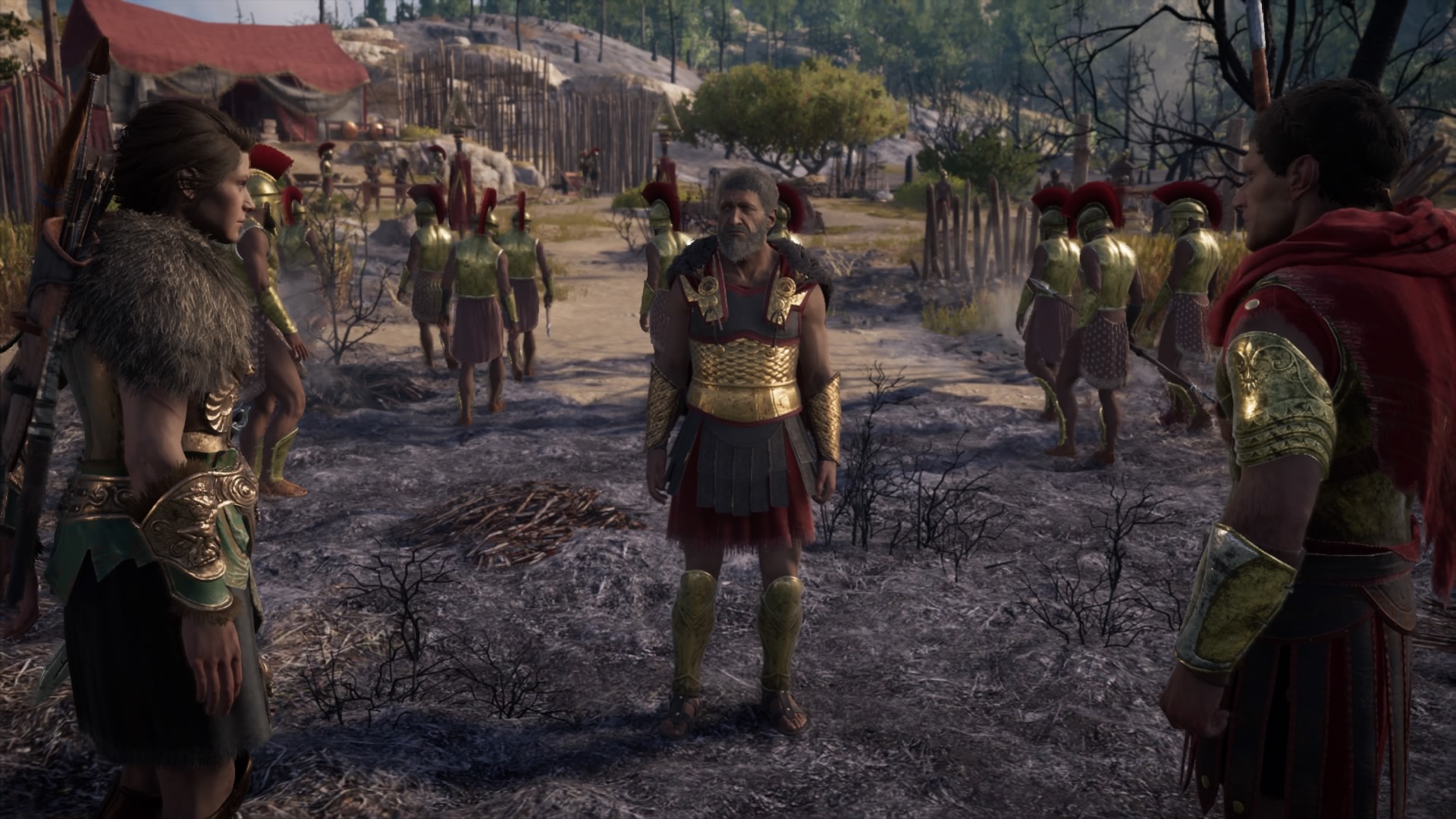 This will conclude the quest, and you can take your progress back to one of the kings.

For more help with Assassin’s Creed Odyssey quests, why not try taking on some of the mythical series in the game, like the Minotaur de Force line of side-quests.

Or if you’re after the artifacts, why not check out how to answer the Sphinx’s riddles or defeat the Minotaur?