Some big changes are coming to Destiny 2 today, including The Draw Exotic event.

The Draw Exotic event begins later on today after the weekly reset for those who purchased the Forsaken Season Pass. In the latest trailer from Bungie, we get to see the Last Word Exotic hand cannon in all its glory.

Fans have been asking for Last Word to be added to the Exotic weapons pool since Forsaken launched as it was one of the best weapons in Destiny. While there are few details about the quest steps that will lead to you getting your hands on Last Word, we can assume you’ll be jumping through quite a few hoops before you can get it.

Prepare to add the Last Word to your holster when The Draw Exotic quest goes live 1/29. pic.twitter.com/8DjyE17jPi

As Last Word is A Hero’s Weapon, it’s only fitting that a second Destiny weapon will be returning to fulfil the role of villain. When the Season of the Drifter begins in March, you’ll be able to get your hands on Thorn, an equally devastating hand cannon from Destiny. The Power limit is set to increase to 700 once the Season of the Drifter begins, so Thorn is likely to be incredibly powerful, particularly in PvP modes.

We’re still waiting on the patch notes being released, but today’s 2.1.4 update includes some major changes to Supers and subclasses, with some having their duration and intensity increased.

Mayhem is also returning to the Crucible playlist this week so you can make the most of the changes with your Supers and to weapons like Grenade Launchers. The way bounties work and how they grant Powerful rewards is also set to change in Joker’s Wild, with bounties acquired during previous seasons having a maximum possible Power reward. 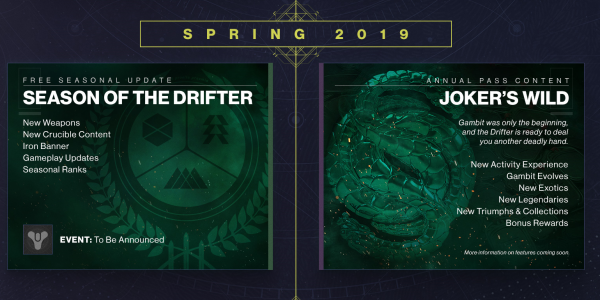 The Crimson Days event has been moved to February 12 and will run until February 19. It will be somewhat similar to last year’s version, so if you missed any of the cool rewards last time then you’ve got a chance to redeem yourself.

Want to know how to unlock the Mysterious Box or how to complete the Lost Souvenir quest? Then check out our Destiny 2: Black Armory guide here.

If you’re new to Destiny 2, have a look at our Destiny 2: Forsaken guide for tips on how to increase your Power, find the best Exotic weapons and how to complete Clan Challenges.