Bethesda said last week it was working on a more dangerous version of PvP mode in Fallout 76. Today, it provided details on what it’s calling “Survival” mode.

In short, this hardcore version of PvP has fewer restrictions and will provide a much tougher go at survival. With more challenge comes greater rewards, too.

Completely separate from the main game, Survival will have its own option next to Adventure in the main menu, making it easier to find. Upon choosing Survival, you will find the same quests, events, and story included in the main Adventure mode. You can use an existing character or create a new one. Just remember if you choose to play a current character, all progress will travel with you along with anything else which affects your character. Basically, what affects your character in one game mode will also affect it in the other.

“This means that if you fire off all your ammo, level up, complete a quest, spend Caps, or find a fancy new weapon in Survival, this will also be reflected on that character in Adventure,” said Bethesda. “If you’d rather keep your existing characters as they are, we recommend starting a new one when you head into the more challenging Survival mode.”

When in Survival mode, all players except for teammates or event group mates, are flagged as hostile by default. There are no invitations to PvP combat in Survival mode, so you’re free to attack other players without restriction. 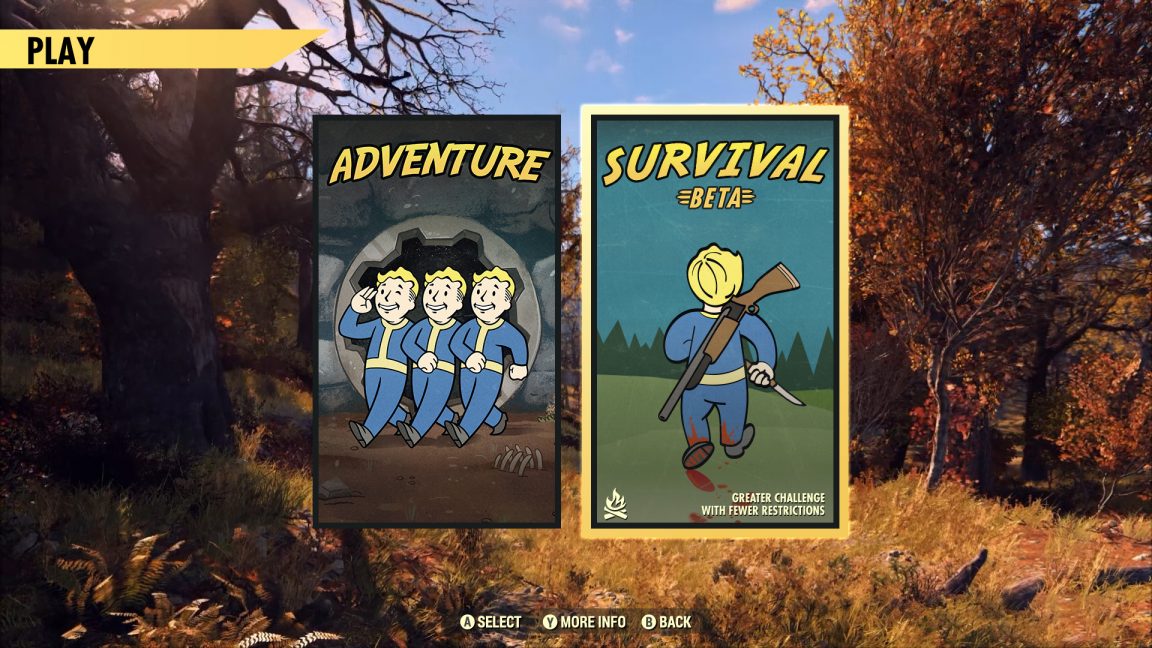 Level scaling will work the same as in Adventure mode. This will keep the playing field level, and give newer characters a fighting chance. That said, you won’t want to just walk up to a low-level character and say high. They can still shoot you in the face.

Bethesda plans to “experiment with different rules” such as death mechanics after beta release. Currently, players who die in Survival mode will be unable to use the seek revenge respawn option. They can only choose to respawn at their C.A.M.P. or Vault 76.

The development team also plans to double the Caps when you kill another player, and they may drop their Aid or other items in addition to Junk. This will make each of your deaths more “devastating” and every kill you make will offer something “more lucrative.”

Of course things may change as the beta progresses, as adjustments will be made during playtesting and through feedback.

There’s also a plan to roll out in-game leaderboards with the start of the Survival mode beta, and more content will be added to the mode with future updates throughout the year.

Phase 1 of the Fallout 76 Survival beta is slated for March.