Anthem is great-looking, technically accomplished and handles like a dream… and yet I’m still not yet entirely convinced.

Back at E3 2018, the initial press conference demo of BioWare’s Anthem left me a little cold. I wrote about how that demo left me “pretty bummed out”, but then a few days later the game had won me back over with a simple hands-on. Anthem might be hard to grasp from watching it alone, but playing it is a different story: it feels great. I wrote as much, and that left me eager for my next hands-on, which finally happened earlier this week.

Our preview was split into two sessions. The first covered the opening hour or two of Anthem as players will experience it in a few weeks’ time. The latter covered late-game content, with BioWare staff handing us a max-level character with end-game content and oodles of customization already unlocked. You’ll have to check back next week for those late-game impressions as today I can only talk about the earlier content, but the end conclusion is the same anyway: Anthem is an incredibly well-made video game – but I still feel like something is missing.

In a way, I’ve yo-yoed back to that very first impression based on the EA Play conference demo. Anthem looks and feels brilliant, but there’s nothing yet about it that screams out to me as an x-factor in its status versus its peers in the four player co-op action RPG space, the likes of Destiny, The Division and even Monster Hunter World.

Those first few hours of Anthem are good, mind, brimming with promise. There were matchmaking and server woes that are all too common to pre-release events on non-final software and server shards, but once you can actually get a game going with friends and begin zipping around in those super-powered suits, it’s bliss.

The ‘traditional BioWare’ side of this BioWare game isn’t bad, either. The introduction to the game is a cinematic experience depicting a fight against ever-worsening odds before the game and world flash forwards to two years later, the world state set and the basic stakes and reasons for the conflict neatly laid out. 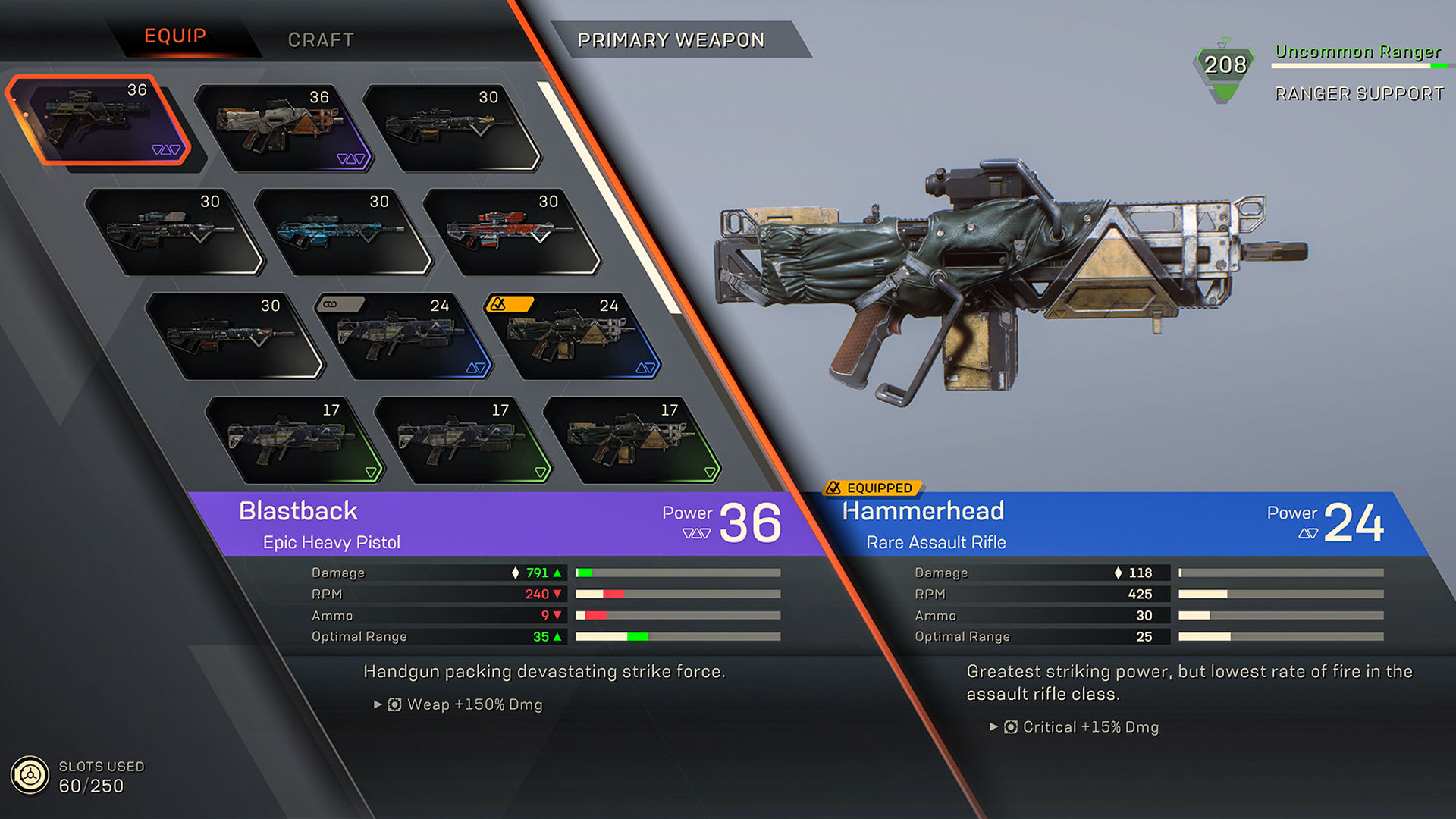 Weapons are one of your primary forms of loot, and through that character progression.

It’s not all about that main plot, either. When you first wander around the hub city there’s plenty of codex items to pick up that explain both important and superfluous backstory. There’s also a few characters to speak to and ambient chatter to overhear. It all feels very Citadel-like.

At the same time this clearly isn’t the same sort of game. Conversation choices are present, but are a simple A or B rather than a range of options. You create a character, but you simply choose between two different voices and a range of pre-set faces that as far as I can tell you won’t even see again – outside of the Javelin mechs, Anthem is all first-person.

Just as in that E3 hands-on demo that upended my attitude towards the game the simple act of moving in Anthem is a joy, with a sort of responsive, sharp attitude to the kinetic properties of the Javelin suits that gives it an immediately satisfying edge. It brings to mind those first moments of play in Super Mario 64, out in the courtyard of Peach’s Castle, where this new range of movement and new set of moves just clicked and felt right. That’s an incredibly hard thing to nail, but Anthem does it.

That’s the conundrum of this game for me so far, however. In Mario 64, you head into the castle and on an unforgettable adventure. That’s what seals the deal for the game – the movement makes the adventure itself possible. That’s where Anthem still has me unconvinced right now. The component parts are clearly expensive and impressive, but when I look past how good it feels in the moment, I’m currently not very convinced at all that Anthem has the x-factor needed to become the sort of iconic game BioWare has made in the past, or indeed become the sort of game that one can sink hundreds of hours into. For the answer to that we’ll likely have to look to that high-level content – and you can read more about that next week. Stick with us.