An inspired blend of both Interplay and Bethesda’s post-apocalyptic visions, is New California the co-op Fallout game you deserve?


Love or hate Fallout 76, it’s hard to deny that West Virginia was a far cry from the series’ iconic narrative roots. Thankfully, 76 wasn’t the only post-apocalyptic multiplayer experience to arrive in 2018 – Fantasy Flight Games unveiled Fallout: New California, a board game expansion inspired by the original Interplay Entertainment titles. Between this release and the core game’s expansive content, players have enough material to customize authentic Fallout multiplayer experiences to their heart’s content.

FFG’s core Fallout set is a complete board game largely inspired by Bethesda’s Fallout 3 and 4. Each session, players arrange tiles face-down into a fog-of-war-never-changes map, and choose a scenario that introduces two factions trying to control the Wasteland. From there, quest cards and encounter decks drive the story for 1-4 survivors while they explore settlements, fight enemies, and scoop up caps across the map. Using quest and encounter cards, players follow branching narratives that alter the game world and eventually guide one faction to victory. Alternatively, players can ignore factions and gather enough influence to earn a personal victory.

By and large, FFG’s Fallout is a unique game that authentically captures the selective morals of each series’ protagonist. That said, player characters have few opportunities to interact, making each multiplayer session feel like solo games were intruding on each other. New California partially addresses this with co-op mechanics that emphasize the shared world, but only capitalises on it for a single adventure. 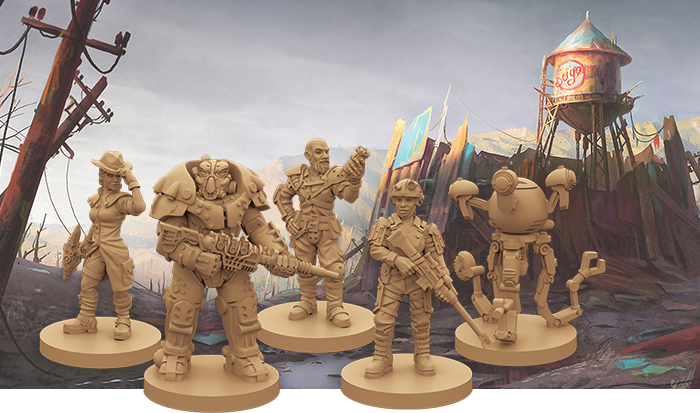 “New California expands the core game with larger maps, new encounters, and – most importantly – quest lines inspired by the original two Fallout games, as well as adding updated versions of the Fallout 3 and 4 scenario cards”

That’s not to say New California isn’t a grand old time. FFG has expanded the core game with larger maps, new encounters, and – most importantly – quest lines inspired by the original two Fallout games. Meanwhile, New California completely and seamlessly merges with FFG’s core set thanks to updated versions of the Fallout 3 and 4 scenario cards. If you’ve already played Fallout’s core scenarios to death, that means you can expect all kinds of new surprises: you might have the opportunity to sell weapons to orphans near the Capital Wasteland, or stumble into a Mirelurk Queen in the Commonwealth.

New California’s first scenario is Rise of the Master, an adventure inspired by Fallout 1’s Unity story arc. Survivors can investigate the Children of the Cathedral, ally with the Brotherhood of Steel, and take part in a climactic church battle that triggers a nuclear weapon. (Alternatively, FFG included the non-canon ending where you can join forces with the Master and become a Super Mutant.)

The second scenario is New California itself, a loose reimagining of Fallout 2’s main storyline. During a visit to Arroyo, the players are asked to find a G.E.C.K. that might resolve the town’s severe drought. This quest sends them across the map to New California before branching into multiple potential Vault hunts, any of which potentially holds the key to victory. Meanwhile, the Enclave are working against your efforts behind the scenes with their own malicious objectives.

If you’re a fan of the Interplay Entertainment classics, these quests should be nostalgic romps for your gaming group. You’ll have the opportunity to experience iconic Fallout story arcs as a group, and reminisce about favorite moments and locations. The downside is that New California’s scenarios are quite difficult for solo players – or even two players – to beat as is. New California practically requires a four-player team to quickly explore the map and uncover Vaults before its ticking clock mechanics triggers an Enclave victory. While you could make house rules to address this, FFG’s expansion is clearly intended for non-solo sessions. 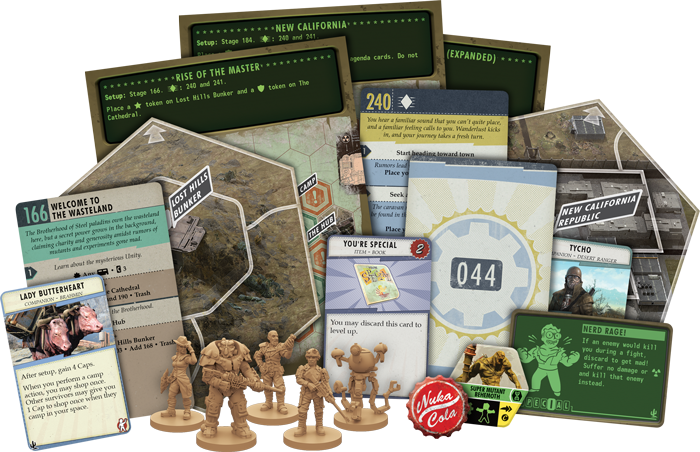 Thankfully, the New California scenario leans into this dynamic with co-operative mechanics that break from Fallout’s standard rules. Instead of choosing (or ignoring) a particular faction, survivors are an independent faction racing to stop the Enclave from completing its mission. As such, players work together to tackle unique objectives across the map at once, or focus on activities with the greatest likelihood of success. It’s a genuinely fresh reworking of Fallout’s tabletop rules that gives everyone a role to play while focusing the team on the overarching story.

Even if you never touch the new scenarios, there’s still additional content to spice up your game. Five new survivor models are included in the expansion: a rogue Enclave soldier, an NCR ranger, a lone gunslinger, a caravan merchant, and a Mister Handy droid. There’s also a Miss Nanny variant card, raising the number of playable characters to six.

Each character has distinct traits that make each session a unique gameplay experience. The lone gunman gets bonuses to weapons, but can never accept companions. The NCR ranger has a map which lets her explore surroundings faster. My personal favorite might actually be the caravan merchant, who initiates shopping opportunities every time he makes camp thanks to his brahmin, Lady Butterheart. Sadly, there is still no playable Dogmeat character to speak of. (Yes, he’s a companion in the core game, but it’s the principle dammit!)

There are also a few new enemies to face, including a giant Enclave robot that’s only activated during a key scenario climax. As with the core game, these enemies have no miniatures of their own, and are limited to simple cardboard pieces or statistics on cards. Yet unlike other tabletop games, this doesn’t feel like a drawback. Fallout’s narrative structure is always the primary focus, immersing you into quests and encounters to such a degree that each moment feels authentically like Fallout, even if a Deathclaw isn’t literally towering over you.

Fantasy Flight Games’ Fallout was already a strong tabletop experience with a few minor flaws. New California directly addresses most these concerns with some new co-op mechanics and story arcs pulled from Fallout’s isometric classics. While it would be nice to have a few more original scenarios, there’s enough here for all the Pip Boys and Girls to enjoy post-apocalyptic gaming sessions around their tabletops.

Hoping for even more isometric Fallout goodness in tabletop form? Check in next week, where we’ll review Fallout: Wasteland Warriors.