Assassin’s Creed: Odyssey is the newest member of the AC family, with a sprawling open world set in ancient Greece.

For the first time, players were able to choose between playing as a male or female protagonist, each with their own unique dialogue and NPC interactions.

In this guide, we’ll be listing some of the major choices you’ll have to make as either Kassandra or Alexios that can impact romances, plot and the ending of the game, so here’s the obligatory spoiler warning.

You can check out our review of Assassin’s Creed: Odyssey here if you’re unsure whether this Greek adventure is the one for you. 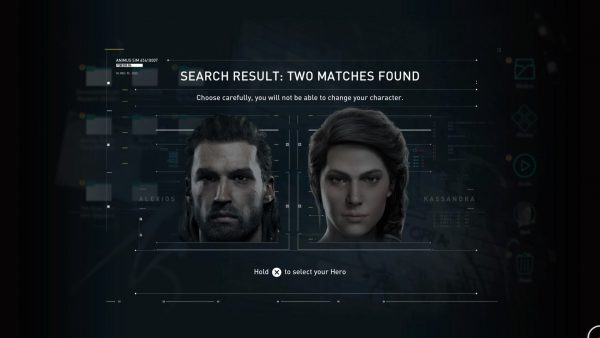 Struggling to decide whether should you choose Kassandra or Alexios? There aren’t too many difference between them but it is a marvel that Ubisoft has chosen to include a female protagonist this time around. 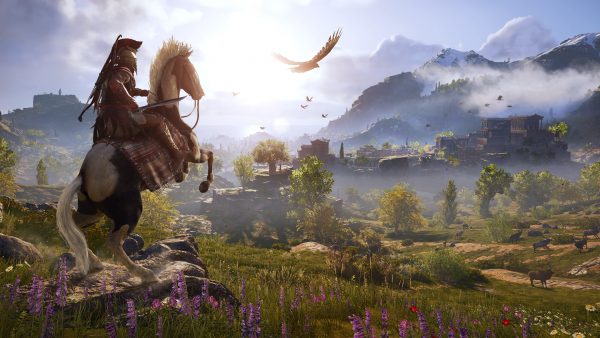 A man’s only as good as his horse, or something like that. Your horse will always be called Phobos but there a few different horses available. Whilst there’s no real difference between the horses in regards to carrying capacity or stamina, it’s always nice to have a choice. We’ll also show you where to find some Legendary horse skins in this guide which we promise isn’t as creepy as it sounds. 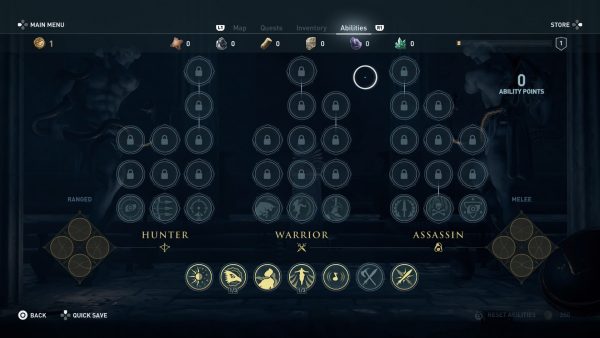 There are various skills and abilities you can learn in AC: Odyssey and you can focus on certain ones to suit your own playstyle. These games were built with stealth in mind and Odyssey is no different. You can choose to play stealthily as an Assassin, as a powerful Warrior or as a cunning Hunter, with separate skill trees for each class. Each style will obviously affect how certain missions pan out, so take care when choosing your abilities. 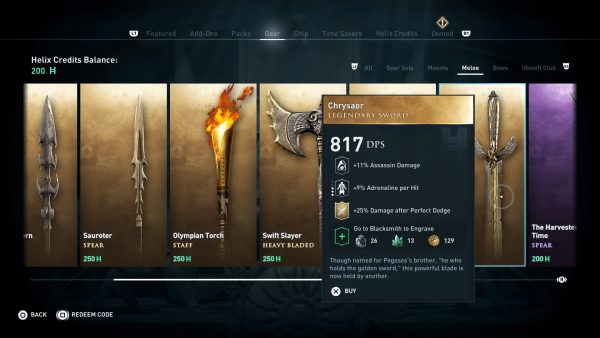 There’s an arsenal of weapons to choose from in AC: Odyssey, including Legendary weapons and upgradable elements that you can forge at a blacksmith. There are also rare and powerful weapons hidden in chests all over the world and are available through the various stages of the game so you won’t be caught short.

Some of the more impressive weapons of the game include the Dagger of Kronus, Pandora’s Kopis and the Mallet of Everlasting Flame, which is as dangerous as it sounds.

Assassin’s Creed: Odyssey best armor and how to engrave it 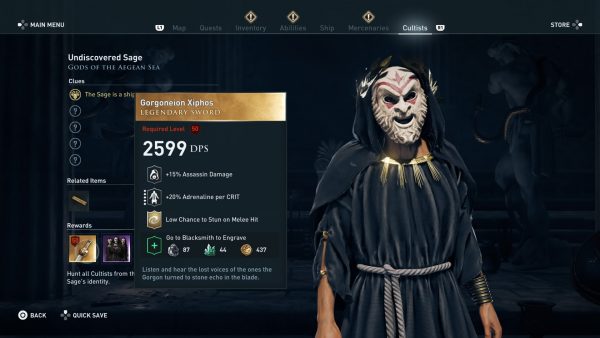 Like weapons, armour comes in various rarity ranks and you’ll be awarded bonuses for wearing a full set of a certain type of armour. You can also engrave your armour, allowing you to add any of the stat boosts and increasing its power and utility.

You unlock engravings by completing in-game challenges and obtaining Legendary items also unlocks their Legendary engraving. There are five main armour slots: Head, Arms, Torso, Waist, and Legs. You can fill these slots with equipment of four different rarity levels, each with different types of special abilities. 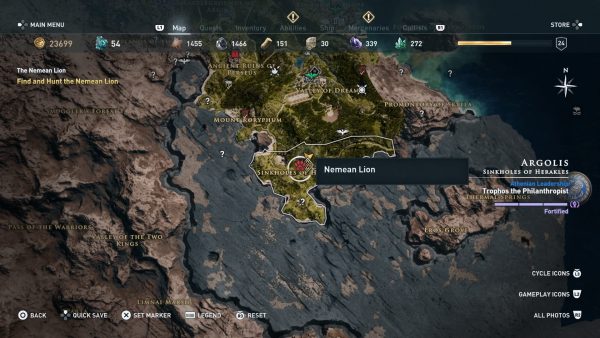 Looking for love? Check out our guide on how to woo Ancient Greece’s finest inhabitants and avoid a Greek tragedy.

Here’s how to complete the Snake in the Grass quest and find Elpenor in Assassin’s Creed Odyssey.

Here’s how to complete the Daughters of Artemis quest and kill the Kalydonian Boar, Hind of Keryneia and the Nemean Lion.

Check out our guide on where to find and beat the Minotaur.

Here’s how to answer the Sphinx’s riddles, complete the Lore of the Sphinx and Awake the Myth quests, and claim one the artefacts for your own.

Here’s how to find the arena, as well as some of things you can do when you get there, along with a few of the rewards.

Where to find some Epic ships in Assassin’s Creed Odyssey.

Here’s how to open the door and solve the mystery of Thera during the A Family’s Legacy quest in Assassin’s Creed Odyssey.

Which Diona should you pick? Check out our guide before you make your choice. 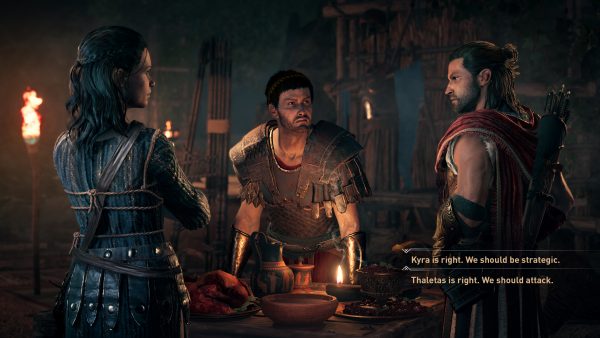 This is one of the most important quests in the game that will affect the rest of your story. We won’t spoil it for you, but what we can say is that regardless of your decision, you receive some excellent loot.

Again, we’re trying our best to avoid any spoilers here, but if you’re looking for the best ending to Assassin’s Creed: Odyssey, check out our guide. 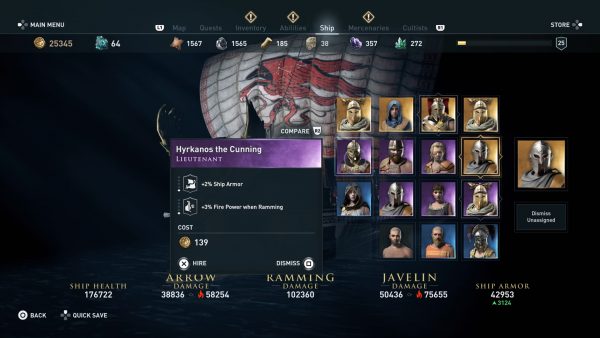 Here’s out guide on where to find the best Special Lieutenants to join you on the Adrestia. 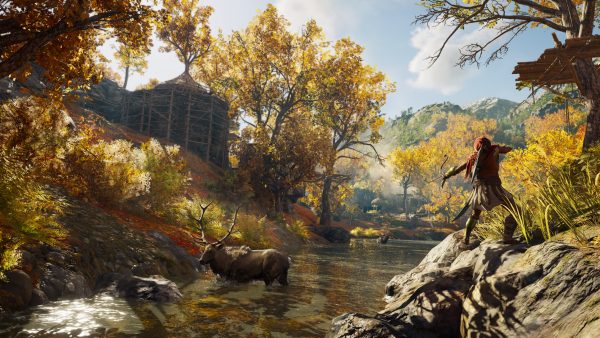 Like most open world adventures, Odyssey has its own day and night cycle. Some quests require you to wait for a specific time of day before you can proceed, and we’ve created this handy guide to show you how to switch between day and night. 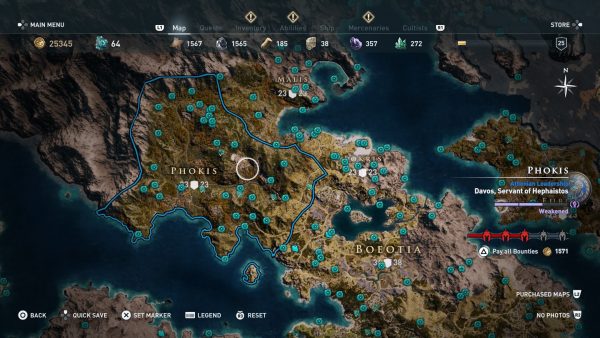 Here’s where to find all the Ancient Tablets so you can upgrade your ship.

Once you’ve scooped up enough of the glittering metal you can swap it for Epic and Legendary gear from a special vendor in Phokis, so here’s where to find it.

Here are our tips on how to stock up on crafting amterials such as Olive Wood, Iron, Leather, Obsidian Glass and Precious Gems.

Here’s a quick rundown of how the Mercenary system works in Assassin’s Creed Odyssey, and how you can use it to your advantage.

Here’s how and where to find more Cultists in Assassin’s Creed Odyssey to get some of the best armour in the game.

Here’s how to complete the Conqueror quest in Assassin’s Creed Odyssey, including where to find all four Boeotia champions.