Some of the best-known stories of Ancient Greece had already slipped into legend by the time Alexios and Kassandra set off on their odyssey. The Bronze-Age civilisation of the Minoans fell into decline at least 600 years before Perikles was even born, but still provided one of the period’s most enduring myths: Theseus and the Minotaur. On the trail of artifacts to open the door to Atlantis, the Misthios must find out if the stories are true and reclaim the relic. Here’s how to complete the entire A Place of Twists and Turns Quest line and defeat the Minotaur.

The first quest that you come across in this line is started by looting the chest at the southern end of Knossos Palace on the eastern side of Messara. 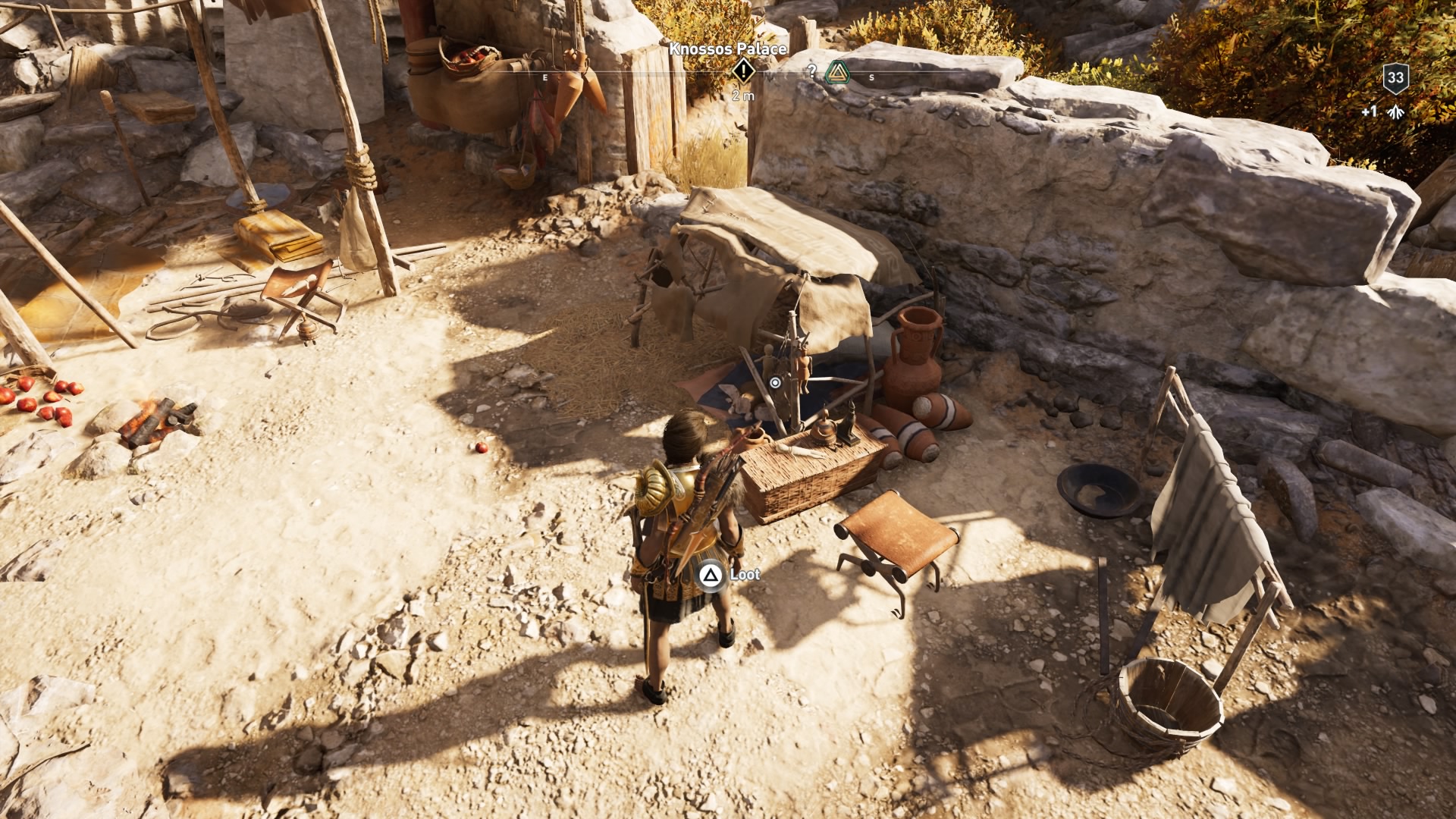 Here, you’ll meet Ardos, a young boy determined to rescue his father from the clutches of the mythical Minotaur. Agree to fight and kill the Minotaur and find his dad, and Ardos will agree to show you the entrance to the Labyrinth – yes that Labyrinth. The one where Theseus slew the Minotaur to save Ariadne.

Follow kid downstairs and marvel at the sheer scale of the Labyrinth of Lost Souls.

Once it transpires you can’t actually get in, Ardos will send you after members of his Dad’s old crew who might know more.

These are the Swordfish in Hekalion, The Collector in Gortyn, and his old Caretaker in Phaistos.

Blood in the Water Quest Guide

To find the Swordfish, who has become a man of ill-repute in the meantime, go to the Fisherman’s Beachhead in Hekalion – which is north of Knossos Palace, on the coast – and talk to the fishermen there. You’ll know who to talk to because of the white magnifying glasses over them. 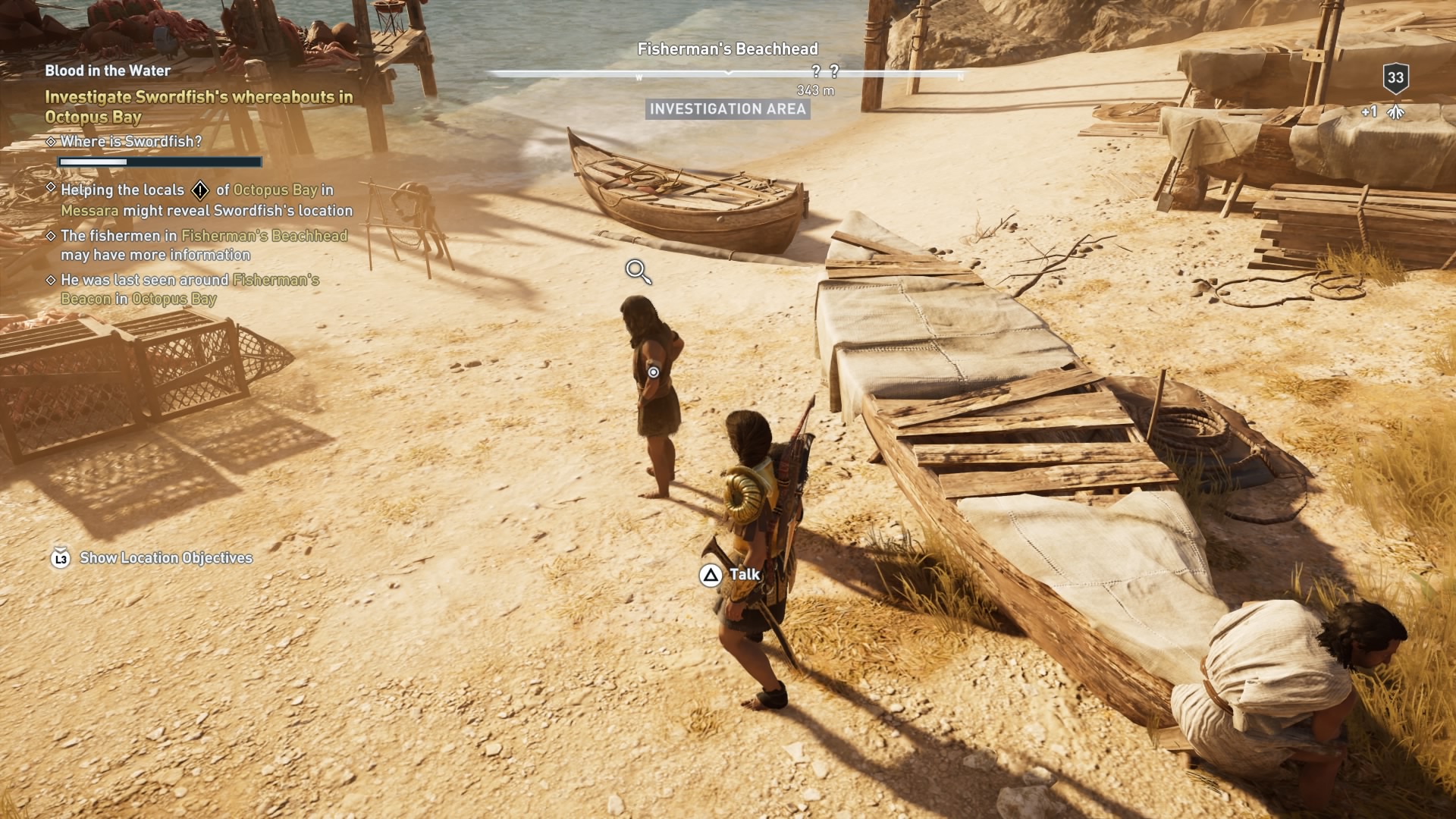 Eventually you’ll find a man who’ll tell you more. When he does, a thug will attack you both.

Now you can either complete side quests that you find around the area, continue with your investigation, or just skip forward to where you need to go.

The quests are Catch and Release, and The Arkalochori Axe. They’re both quite easy to complete and you’ll need the XP for your Odyssey.

In the axe quest you just need to go to a cave east of the town and kill a couple of people.

For Catch and Release all you have to do is sail north, kill some bandits and come back.

Completing these give you the clue to search around the waters of Fisherman’s Beacon, which is to the northwest of Herakion. 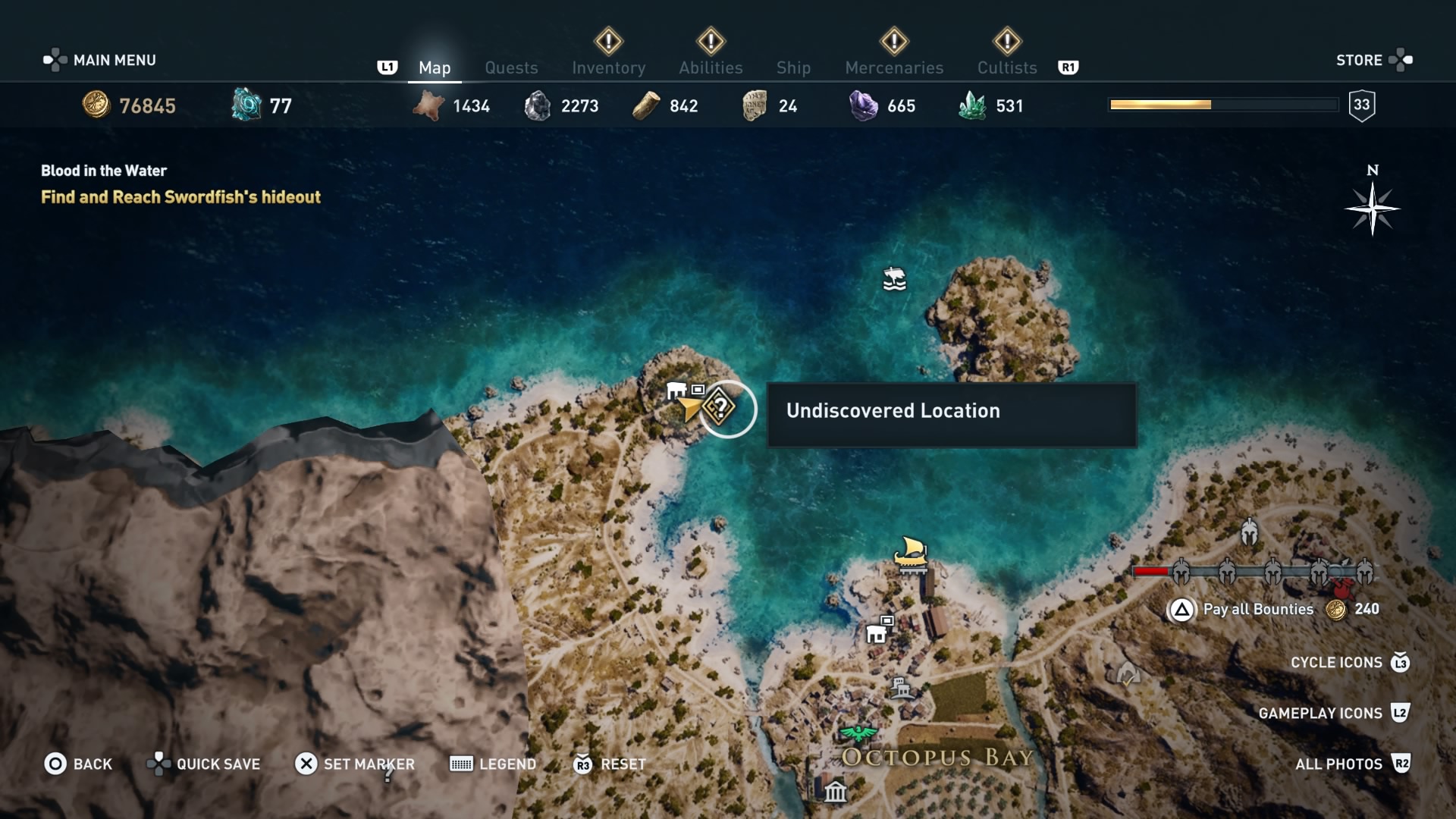 The question mark on the eastern side of the beacon is your target – the Swordfish’s hideout. It’s underwater so you need to dive down.

It’s called Hermit’s Dive, and there are loads of sharks so be careful. Be quick though, and you can nip past them into the cave even if they start to have a nibble on your sandals.

At the end of the underwater cave talk to the Swordfish, get out of the water and creep up on your target. Moving close to him will trigger a cutscene, where you can pretend to be Deimos if you want.

Eventually, after revealing himself as a cultist, he’ll attack and fights a bit like the King of Bandits from the arena. Use your extended dodge to get out of the way of his sliding attack when he glows red, and be ready to dodge when he disappears using a smoke bomb. 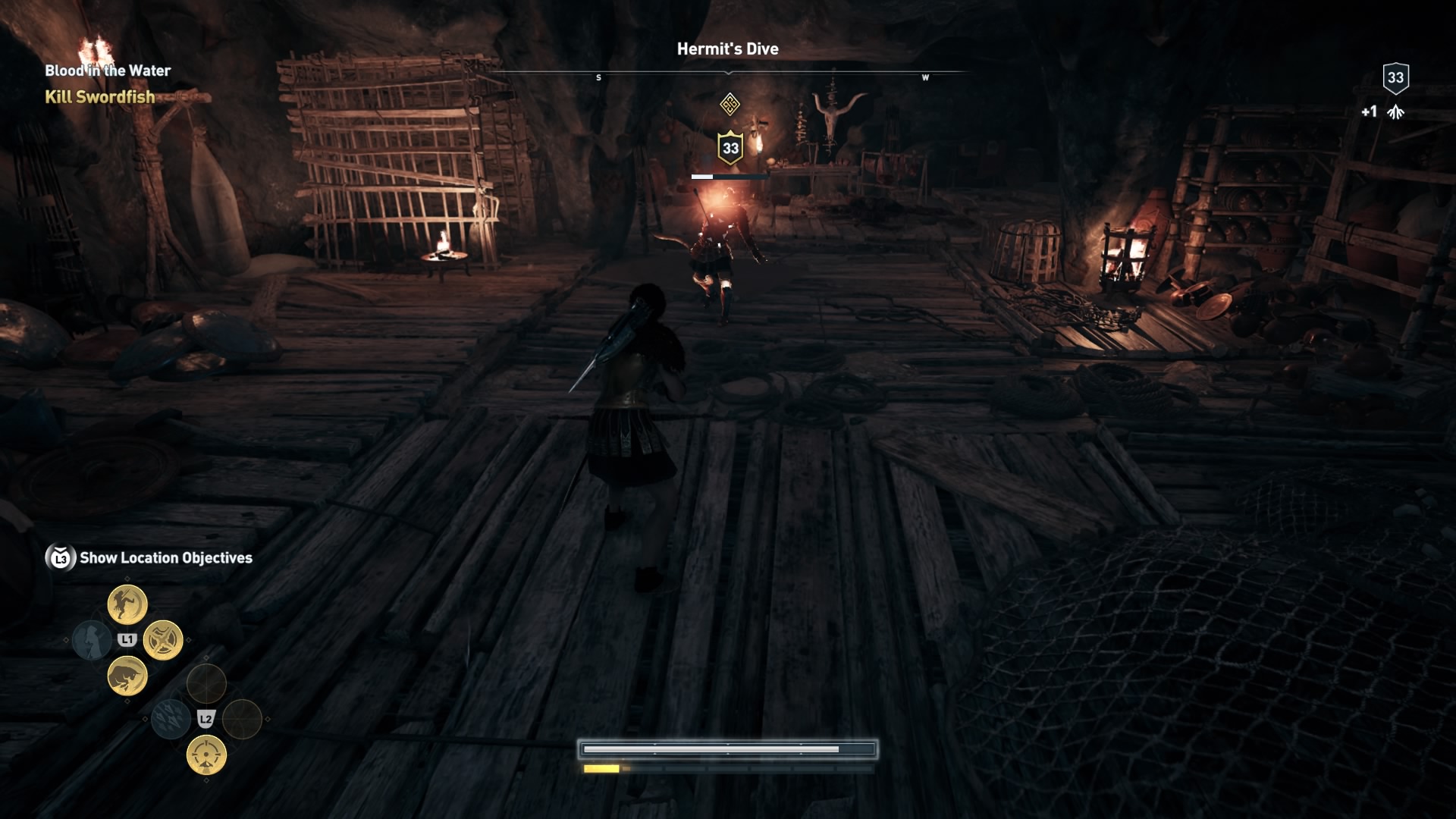 Once he’s dead, grab the chest in the back of the room and head to the next quest.

Next on the list, you’ll find The Collector in the southeast side of Gortyn.

Be nice in your conversation with him and he’ll tell you about Theseus’ armour.

To find it, you have to travel to Daidalos Fort, a short distance southwest of Gortyn up the hill.

The secret cave is at the western end of the fort in the Daidalos Armoury. 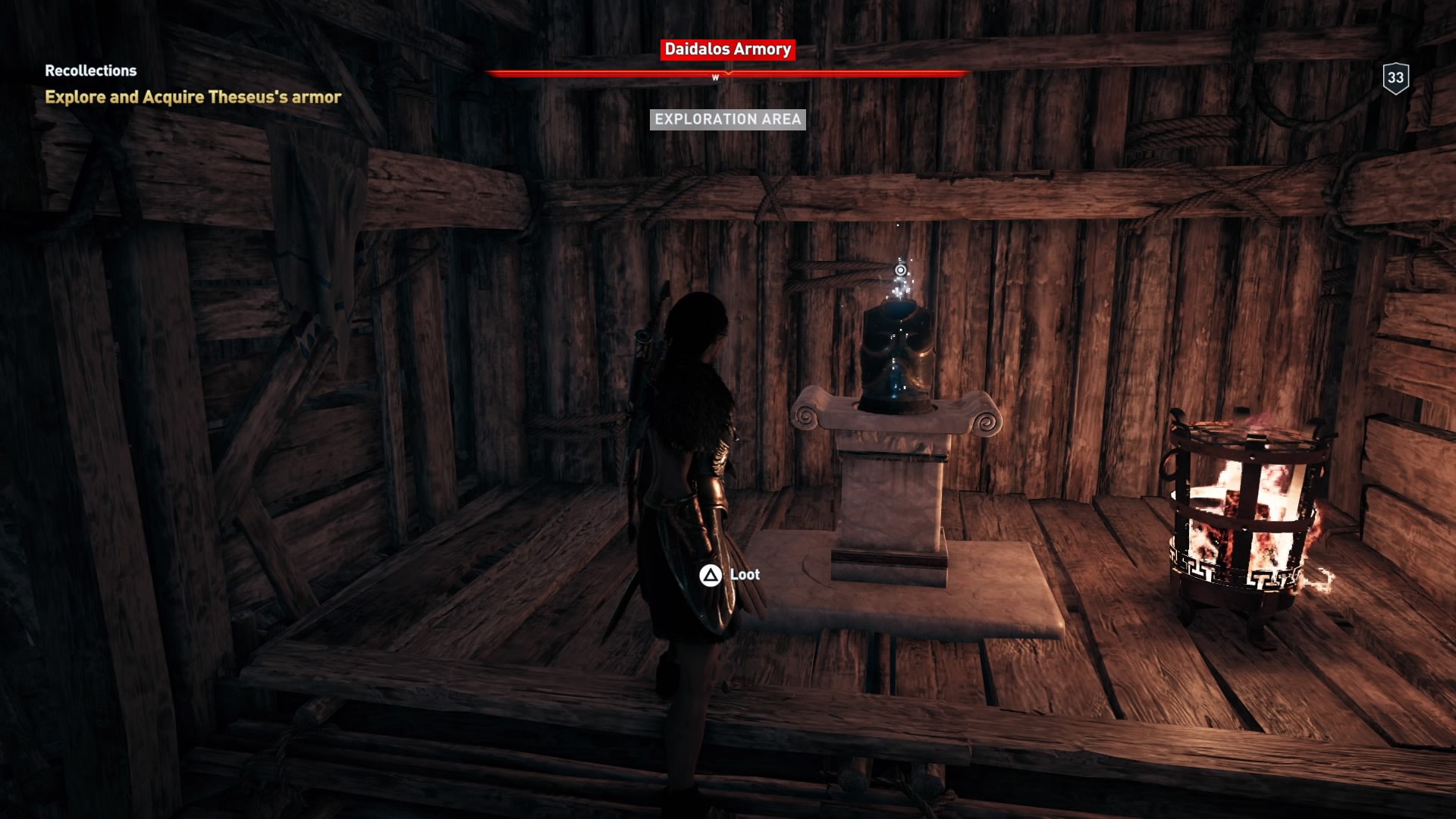 The chestplate – which looks like a silver version of the Golden Fleece we put on our best armour page – that you need is on a plinth up the ladder in the armoury. It shouldn’t be too hard to spot, there’s only one guard in here too.

Finally, head west over to Phaistos and speak to the man at Ardos’s House. He’s not quite who he says he is, so get tough and he’ll spill.

Go south to the village of Phaistos, then on the western side of the village is Phaistos Theatre, you’ll find the old man there. 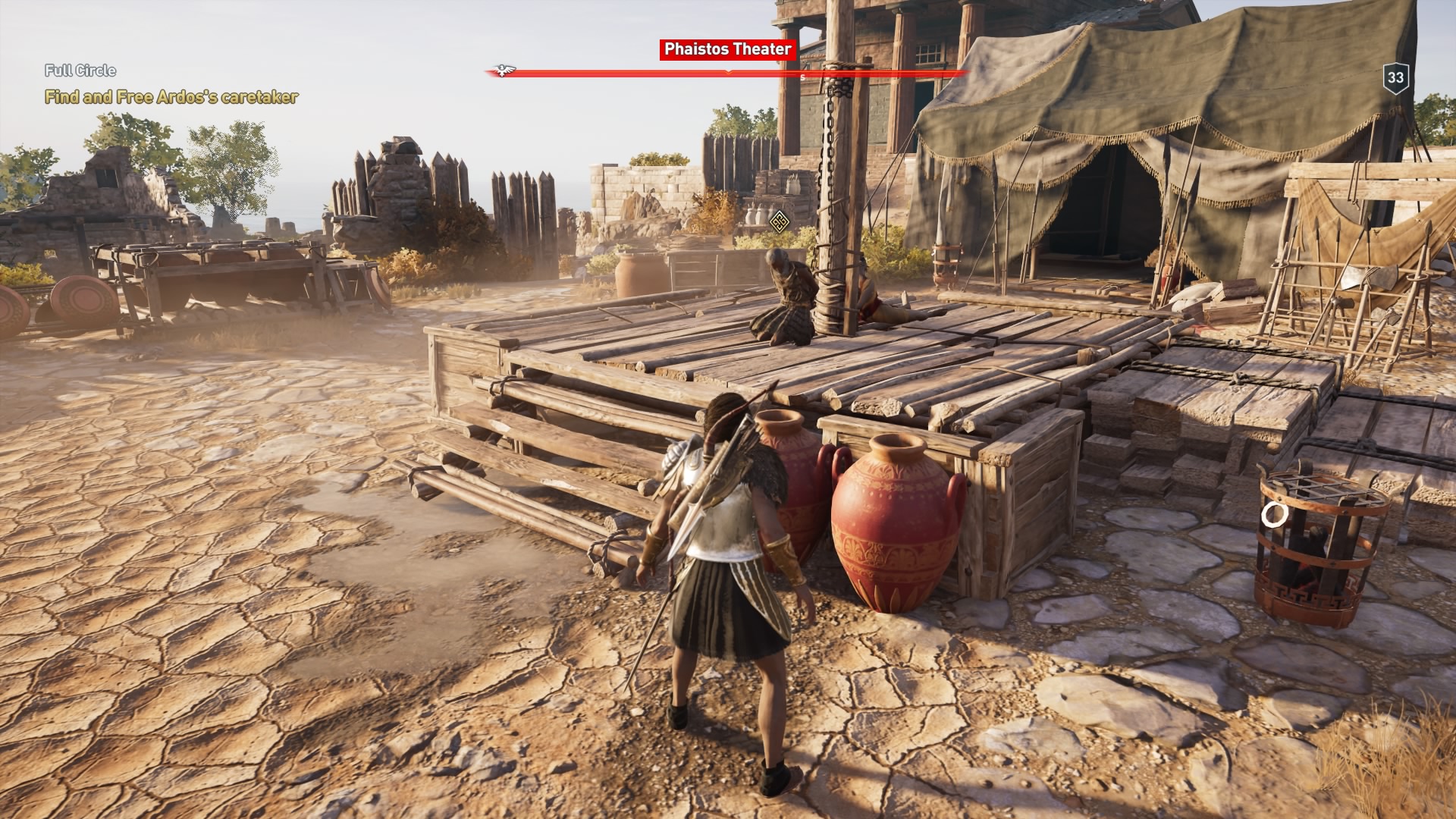 Clear out the guards, then escort the man out of the village and talk to him.

He’ll tell you about the disk you need to enter the Labyrinth and give you Theseus’ Greaves in exchange for helping him.

Now that you know what you need, return to Ardos at Knossos Palace.

Talk to him and get him to give you the disk key to the Labyrinth. He’ll hand it over and you’ll get another piece of Theseus’ armour.

Dive into the hole and interact with the door, which will trigger one of the only loading screens in the whole of Assassin’s Creed Odyssey. 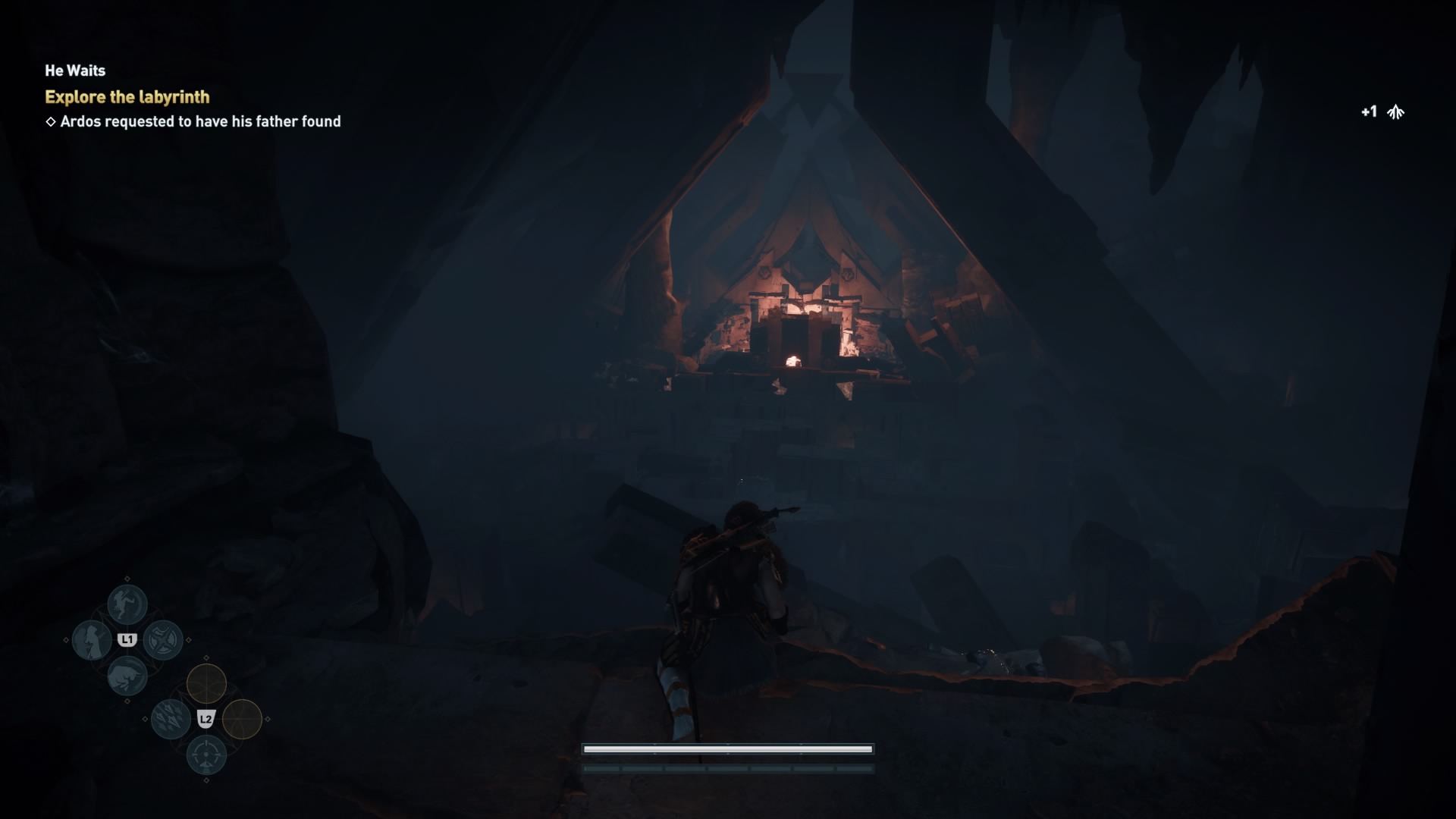 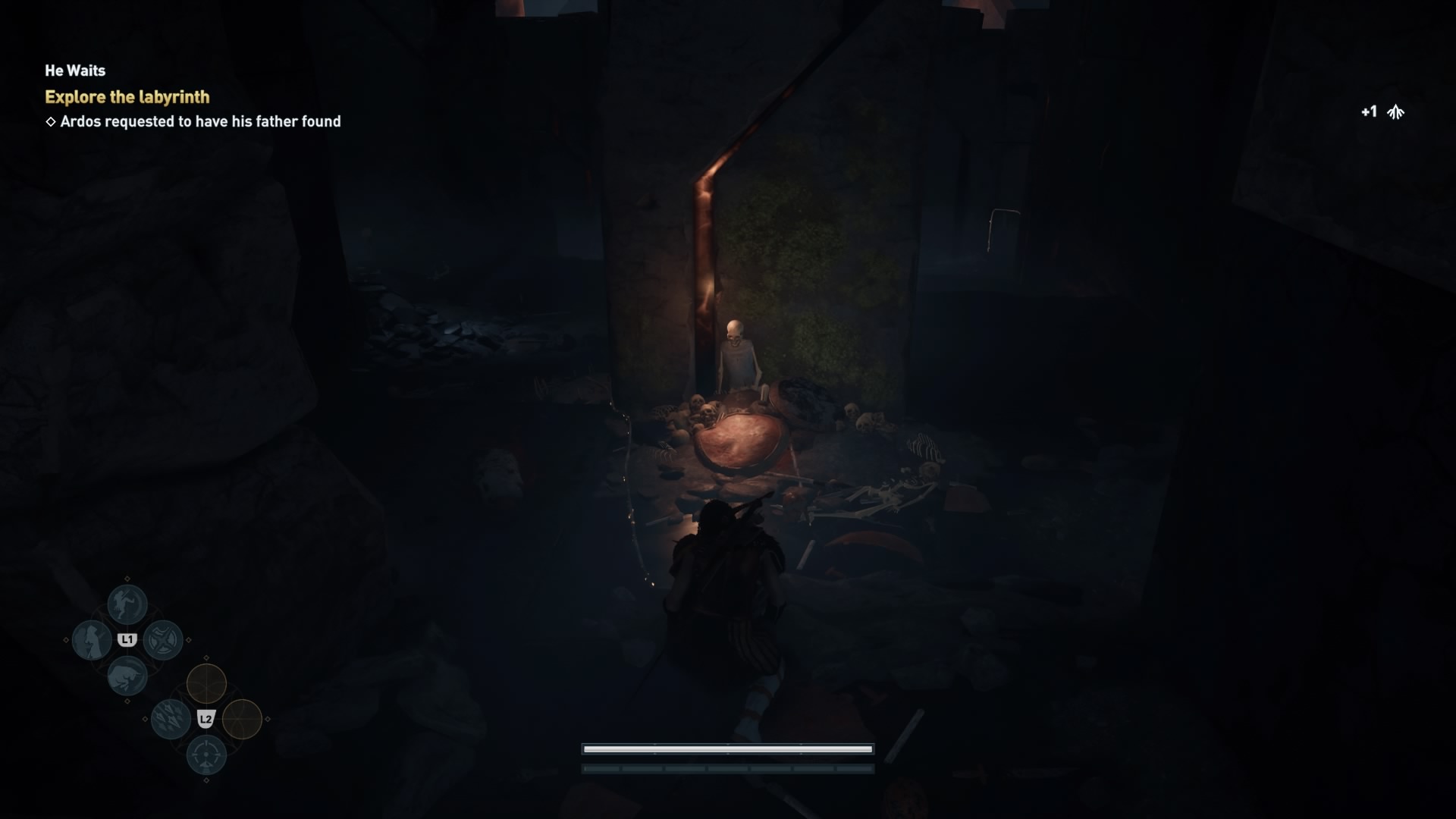 Follow the string until you find Nikios – Ardos’ sadly departed father – and you’ll find a ring to give to the kid. 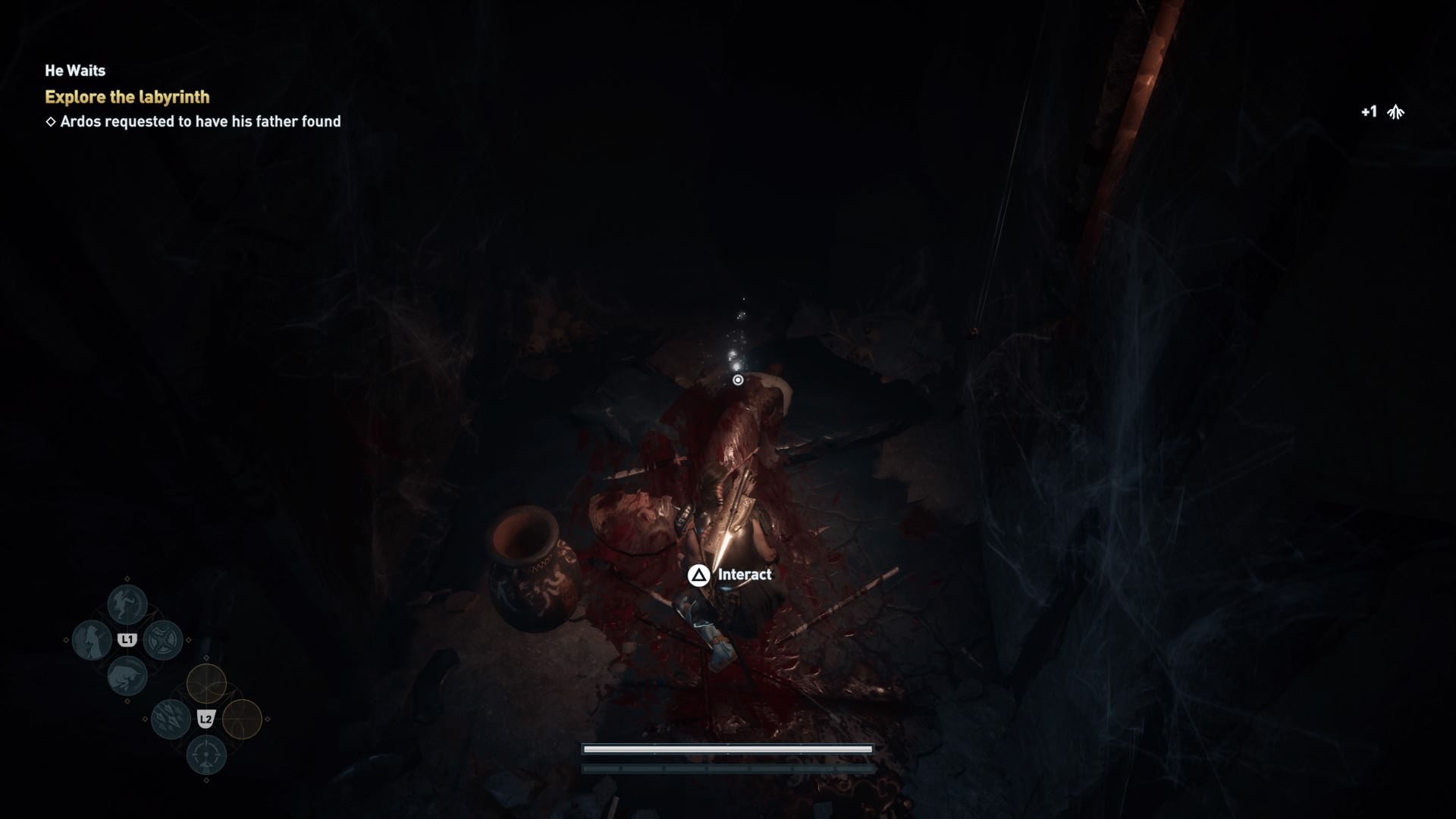 Then turn back around, turn left, then go straight ahead, jumping across the gap. 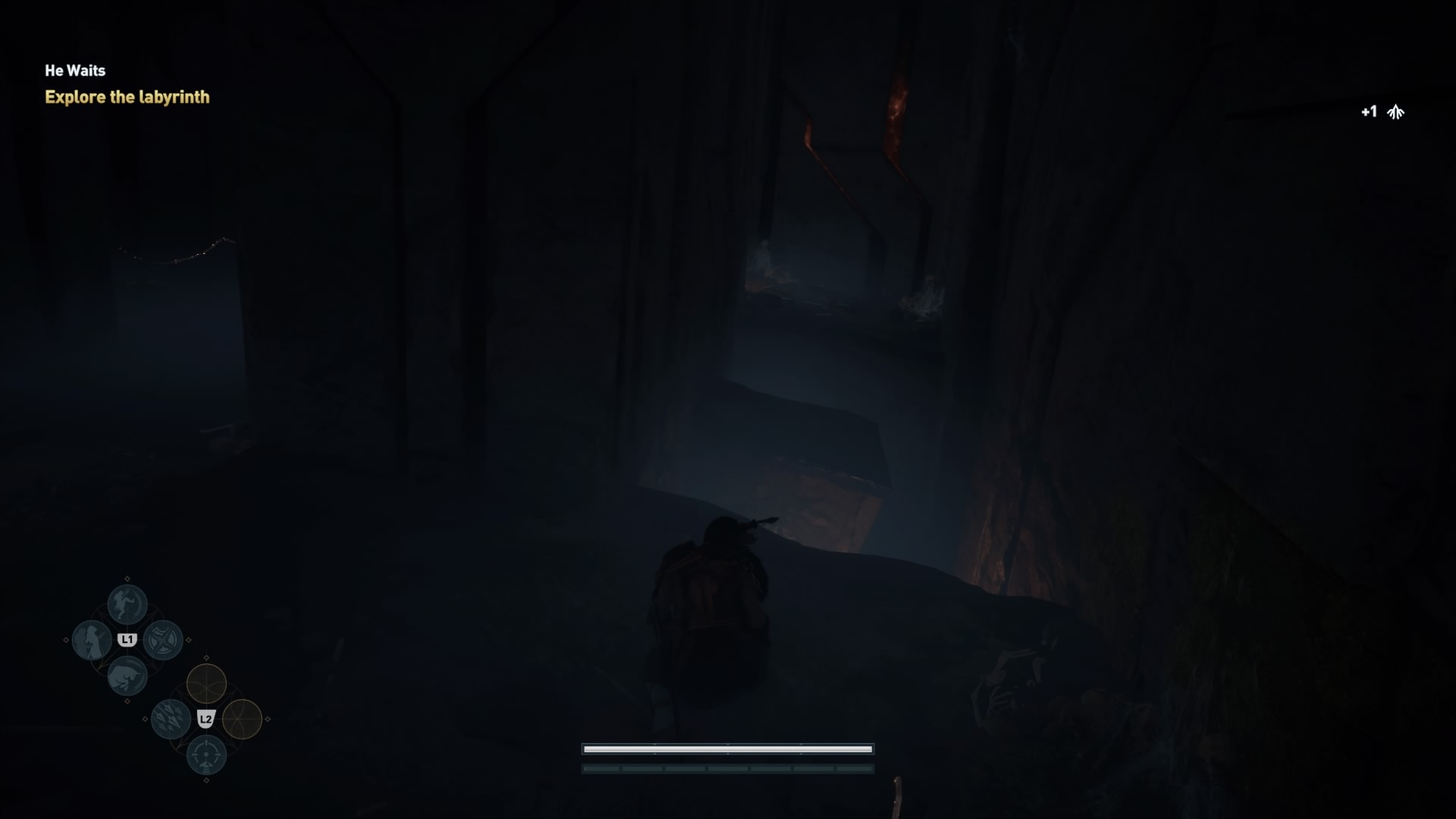 Follow this path around the corner. You can now either go straight ahead, or turn left. All paths on the left lead to chests with crafting items, so jump onto the wall on the straight ahead path to proceed. 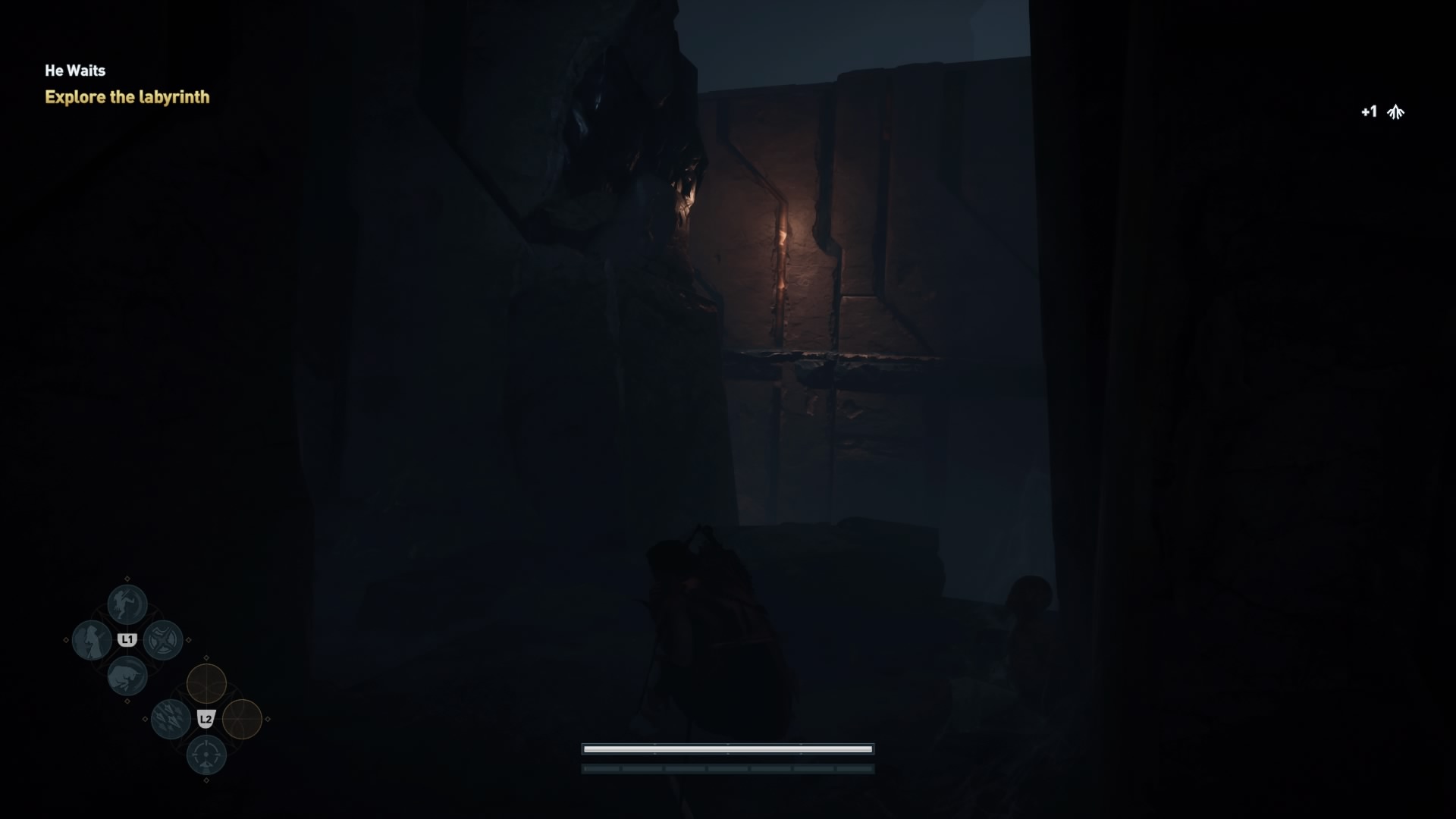 Shimmy along that wall and drop down on the other side.

Straight ahead is a dead end, so take the first right and follow the path.

Once you reach a fork you can take a detour to get a chest by sliding under the large stone, otherwise follow the path around left to where you can see the light. 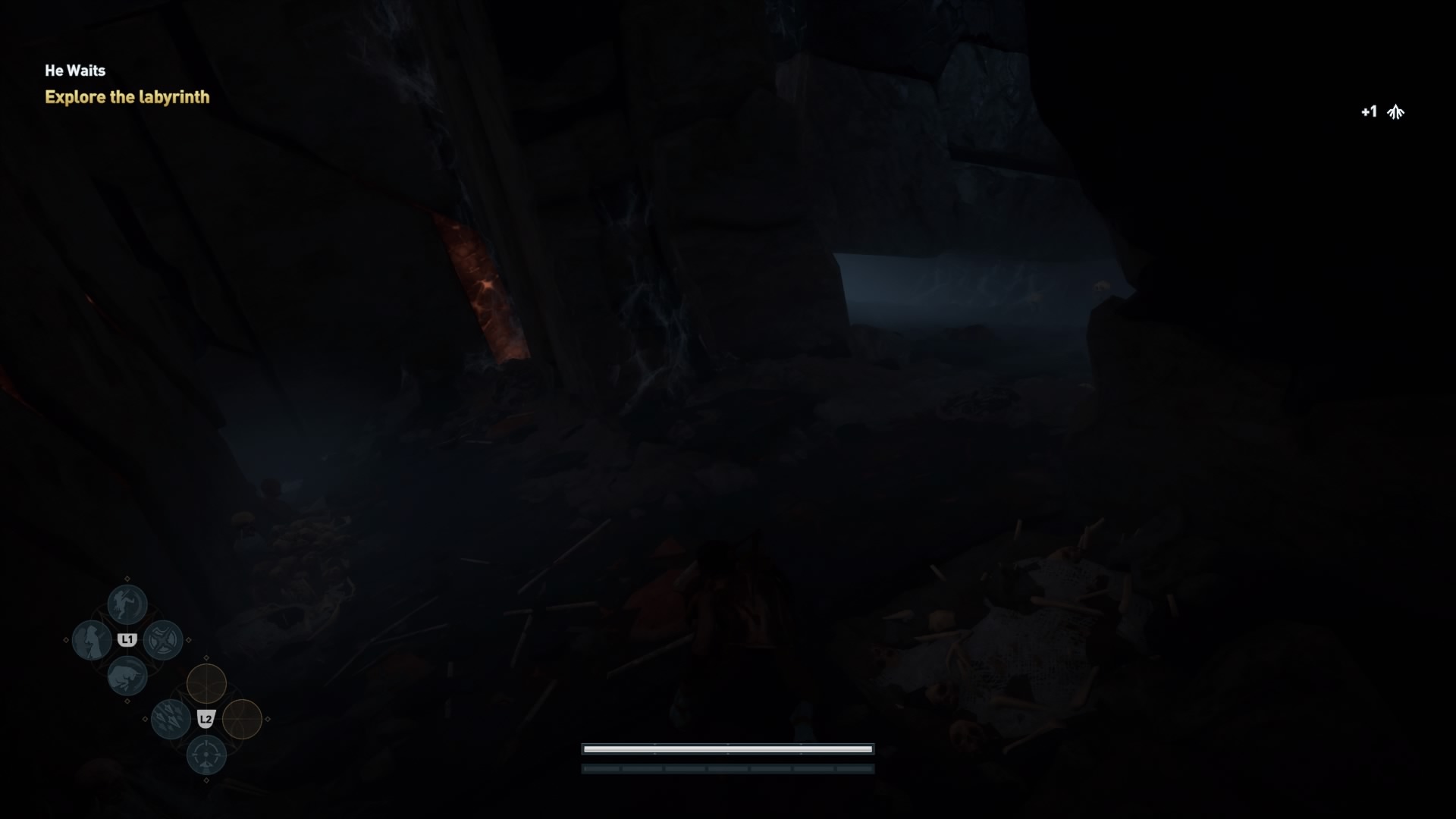 Jump across and you’ll be face-to-face with the Minotaur.

How to kill the Minotaur in Assassin’s Creed Odyssey

The Minotaur is at his deadliest at close range, so if you’re struggling, the key is to keep your distance and use ranged attacks. 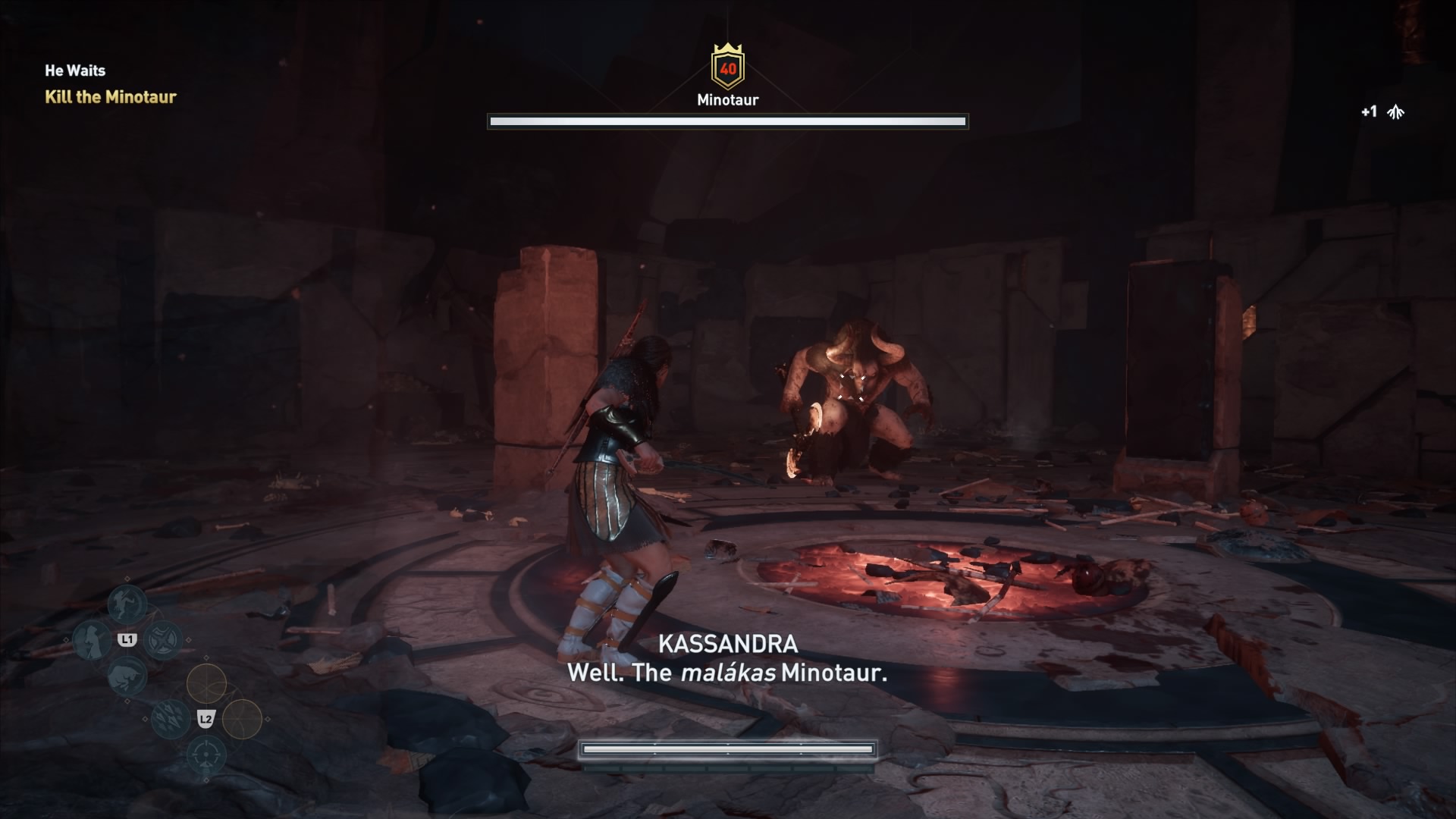 To maximise your damage, use a ranged weapon with elemental buildup like the Fanged Bow, or Fire Arrows. Once the Minotaur charges you, dodge out of the way and land a few cheeky blows to his back while he’s stunned.

If you circle the edge of the arena, despite his speed, you should have enough time to get out of the way.

Shooting him like this should give you enough adrenaline to use your Overpower Attacks ability to keep your health topped up and deal big damage.

Now you’ve taken out the real Minotaur, why not squish the rumours in Pephka during the Minotaur de Force questline.